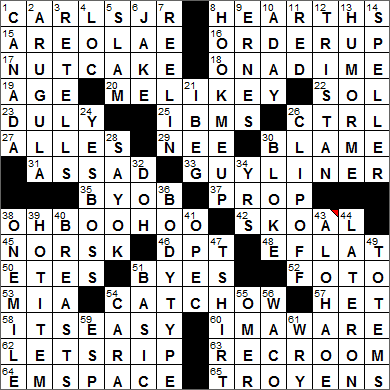 Today’s Wiki-est, Amazonian Googlies
Across
1. Thickburger seller : CARL’S JR
The Carl’s Jr. fast-food restaurant chain was founded in 1941 by Carl Karcher. Karcher’s first restaurant was a full-service establishment called Carl’s Drive-In Barbeque. He then built on his first success by opening a chain of smaller restaurants with a smaller menu and called them simply “Carl’s”, which was changed to Carl’s Jr. in 1954.

17. Alternative to a babka : NUTCAKE
Babka is a sweet yeast cake that can also be called Bobka or baba. Babka originated in Eastern Europe and is served traditionally in Easter Sunday.

27. It means everything to Erhard : ALLES
“Alles” is German for “all”.

The term “obituary” comes from the Latin “obituaris”, originally the record of the death of a person, although the literal meaning is “pertaining to death”.

31. He began his third presidential term in 2014 : ASSAD
Dr. Bashar al-Assad is the current President of the Syrian Arab Republic and the son of the former President Hafez al-Assad whom he replaced in 2001. President Assad is a medical doctor, speaks fluent English and conversational French. Assad was studying ophthalmology in London when he met his wife, who is an Englishwoman.

33. Part of a goth dude’s look : GUYLINER
“Guyliner” is an informal word for eyeliner, when worn by a male.

35. Party rule, for short : BYOB
Bring Your Own Beer/Bottle/Booze (BYOB)

42. Cry before some clinking : SKOAL
Skoal is a Swedish toast, with roots in the old Norse word “skaal” meaning “cup”.

45. Like Grieg, to Grieg : NORSK
“Norsk” is the Norwegian word for “Norwegian”.

Edvard Grieg is Norway’s best known composer, active in the Romantic Era. Grieg’s most famous works are the gorgeous “Piano Concerto in A minor:”, and his incidental music for the play “Peer Gynt” by Henrik Ibsen.

51. Seeds often have them : BYES
The word “bye”, as used in sport, originated in cricket. A bye is a run scored due to an error by the wicketkeeper (similar to a catcher in baseball) when he fails to stop a ball bowled by the bowler (like a pitcher in baseball). Later the word “bye” in sport came to mean the position of a player in a tournament who is left without a competitor when the rest have drawn pairs. In these commercial times, those byes tend to be awarded to the best (seeded) players, so that the most popular players advance past the first round of competition.

54. Himalayan food, maybe : CAT CHOW
The Himalayan breed of cat has long hair and is identical to the Persian, but with blue eyes and different colors at the extreme points of its coat.

64. It’s measured in points : EM SPACE
In typography, there are em dashes and en dashes (and spaces). The em dash is about the width of an “m” character, and an en dash about half that, the width of an “n’ character. An en dash is used, for example, to separate numbers designating a range, as in 5-10 years. Th em dash seems to be going out of style, and indeed the application I am using to write this paragraph won’t let me show you one!

65. Warriors in l’Iliade : TROYENS
In French, the Trojans (Troyens) pay a big part in the Iliad (l’Iliade).

“Iliad” is an epic poem by the Greek poet Homer, which tells the story of the siege of Ilium (also known as Troy) during the Trojan war.

2. Plant called “rocket” outside the U.S. : ARUGULA
Eruca sativa is an edible plant that is known as arugula in the US, and rocket in the British Isles and Canada. The Italian name for the plant is “rucola”, from the Latin name. It is “rucula” that evolved into the American term “arugula”.

4. Footnote abbr. : LOC
Loc. cit. is short for “loco citato” meaning “in the place cited”. Loc. cit. is used in a footnote instead of op. cit. as it refers not only to a prior work, but also to the same page in that work.

6. Copacetic : JAKE
Both “jake” and “dandy” are slang words meaning “fine”, as in “things are just dandy”.

9. Cousins of harriers : ERNES
The ern (also erne) is also called the white-tailed eagle, and the sea-eagle.

11. Ketchup, e.g. : RED
The term “ketchup” may be of Chinese origin. One suggestion is that the name comes from “kôe-chiap”, meaning the brine of pickled fish. The name may also come from the Chinese “jyutping”, meaning “tomato sauce”.

12. His servant is Kurwenal, in opera : TRISTAN
“Tristan und Isolde” is an epic opera by Richard Wagner (Wagner … not one of my favorites!). Many see it as the first serious move away from the traditional harmony and tonality of the classical and romantic eras.

14. Person breaking his word? : SPELLER
A speller, a person spelling out a word, breaks that word into letters.

30. Fellow : BLOKE
“Bloke” is British slang for a fellow. The etymology of “bloke” seems to have been lost in the mists of time.

38. 80 chains or 8,000 links : ONE MILE
A chain is a unit of length, equal to 100 links. There are 10 chains in furlong, and 80 chains in a mile. The original chain was known as Gunter’s chain, and was literally a length of chain used by clergyman Edmund Gunter in 1620 in the surveying of land.

41. Carlos the Jackal raided its HQ : OPEC
Carlos the Jackal (real name “Ilich Sánchez”) is a terrorist from Venezuela who is serving a life sentence in a French jail. One of the most famous operations executed by Sánchez was a 1975 raid on the OPEC headquarters in Vienna in which three people were killed. Sánchez was given the codename “Carlos” by one of the terrorist organizations that he he joined, because of his South American roots. Carlos was then nicknamed “the Jackal” by a British newspaper when it was reported that the terrorist was at some point carrying a copy of the novel “The Day of the Jackal”.

43. Song with the lyric “Until we meet again” : ALOHA ‘OE
“Aloha ‘Oe” is a song of Hawaii composed by Liliuokalani, the last monarch of Hawaii and her only queen. The title translates as “Farewell to Thee”.

49. Animistic figures : TOTEMS
Totem poles are large sculptures that have been carved from trees. Totem poles are part of the culture of Native Americans in the Pacific Northwest of North America.

55. Post-Passover period : OMER
In the Jewish tradition, the 49 days before Passover and before Shavuot are verbally counted in the practice known as counting of the Omer.

56. ___ siege (1993 newsmaker) : WACO
In recent years, Waco is perhaps most famous as the site of a siege and shootout between ATF agents and members of the Protestant sect known as the Branch Davidians. Shortly after ATF agents tried to execute a search warrant, shots were fired and at the end of the fight six people inside the Branch Davidian compound were dead, as were four agents. A fifty-day siege ensued at the end of which a final assault resulted in members of the community setting fire to the compound. Only nine people walked away from that fire. 50 adults and 25 children perished.