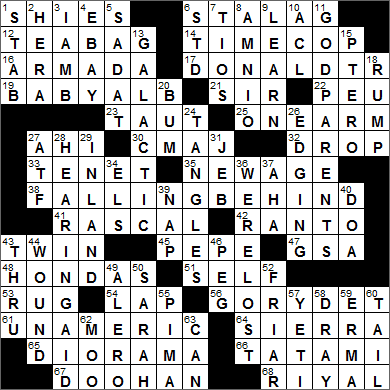 CROSSWORD SETTER: Jim Peredo
THEME: Falling Behind … each of today’s themed answers FALLS downwards, with the down-portion of the answer being a term meaning “BEHIND”.

17A. Who said about himself “Women find his power almost as much of a turn-on as his money” : DONALD TRUMP
19A. Record of infantile behavior? : BABY ALBUM
56A. Part of a story you might not want to know : GORY DETAIL
61A. Hating baseball and apple pie? : UNAMERICAN

Today’s Wiki-est, Amazonian Googlies
Across
6. “The Great Escape” setting : STALAG
Stalag was the term used for a prisoner-of-war camp in Germany. Stalag is an abbreviation for Stammlager, which in turn is the short form of Mannschartsstamm und Straflager, literally meaning “crew master and prison camp”.

“The Great Escape” is a 1944 non-fiction book by Paul Brickhill that recounts the story of a mass escape from Stalag Luft III in Germany. Brickhill was actually a participant in the breakout. Famously, the book was adapted into a very successful 1963 movie starring Steve McQueen and Richard Attenborough.

Jean-Claude Van Damme is a Belgian actor and expert in martial arts. Given his background, he is referred to by the nickname “The Muscles from Brussels”.

16. Fleet : ARMADA
The most famous Armada was the Spanish fleet that sailed against England in order to overthrow Queen Elizabeth I in 1588. It failed in its mission, partly due to bad weather encountered en route. Ironically, the English mounted a similar naval attack against Spain the following year, and it failed as well.

17. Who said about himself “Women find his power almost as much of a turn-on as his money” : DONALD TRUMP
Donald Trump got into real estate development under the influence of his father, Fred Trump, a wealthy New York City developer, and founder of the Trump Organization.

22. Little, in Lille : PEU
Lille is a large city in the very north of France sitting right on the border with Belgium. The name “Lille” is a derivation of the term “l’isle” meaning “the island”.

33. Basis of a platform : TENET
A tenet is an article of faith, something that is held to be true. “Tenet” is Latin for “he holds”.

35. Relaxing music genre : NEW AGE
The New Age Movement is a western philosophy with roots that date back to the early 1800s. The movement focuses on achieving the highest human potential as an individual and embraces many traditionally eastern spiritual practices, but eschews all religious doctrines. New Age music is composed with the intent of supporting this philosophy. It tends to be very minimalistic, very tonal and harmonic. It is often used as a backdrop for relaxation or meditation.

45. José, to friends : PEPE
“José” is the Spanish for “Joseph”. Friends might also refer to José as “Pepe”. There is a common assertion tha both “José” and “Pepe” derive from Saint Joseph, the father of Jesus. Saint Joseph is sometimes referred to as “padre putativo” meaning “presumed father”. The abbreviation “PP”, standing for “padre putativo”, led to the name “Pepe”. Well, apparently this neat etymology is apocryphal. It is far more likely that “Pepe” comes from the Italian “Beppe”, itself a nickname for the Giuseppe, which is Italian for “Joseph”.

47. Fed. management agency : GSA
The US Government’s General Services Administration (GSA), as the name suggests, provides general services to other federal agencies. So for example, the GSA manages office space for the other agencies, and transportation.

51. Narcissist’s focus : SELF
Narcissus was a proud and vain hunter in Greek mythology. He earned himself a fatal punishment, being made fall in love with his own reflection in a pool. So, take was he by his own image, that he could not leave it and wasted away and died by the pool. Narcissus gives us our term “narcissism” meaning “excessive love of oneself”.

64. ___ Madre : SIERRA
“The Treasure of the Sierra Madre” is a 1927 novel by German novelist B. Traven. The book was made into a famous 1948 movie of the same name by John Huston, starring Humphrey Bogart and Walter Huston (director John’s father).

66. Japanese mat : TATAMI
A tatami is a traditional mat used on floors in Japan. The term “tatami” comes from the Japanese word “tatamu” meaning “to fold”, reflecting the fact that the mat is designed to be folded up for storage.

67. James of “Star Trek” : DOOHAN
In the “Star Trek” series on television and in the movies, the colorful character of “Scotty” was played by the Canadian actor James Doohan. Doohan joined the Royal Canadian Artillery at the start of WWII, and participated in the D-Day Invasion of Normandy. After surviving the landing, that same day Doohan was shot by one of his own men in a tragic mishap. Doohan was hit six times, with a bullet to his chest stopped by a silver cigarette case he was carrying. One of Doohan’s fingers was shot off in the incident, an injury that he successfully concealed during his acting career.

Down
2. “Great ___!” (Wonder Woman cry) : HERA
Wonder Woman first appeared in print in 1941, in a publication from DC Comics. As she was created during WWII, Wonder Woman’s first foes were the axis powers. In the less realistic world her biggest foe was and still is Ares, a “baddie” named for the Greek mythological figure. Wonder Woman had several signature expressions, including “Merciful Minerva!”, “Suffering Sappho!” and “Great Hera!”.

3. “Hurray” or “alas” : IAMB
An iamb is a metrical foot containing an unstressed syllable followed by a stressed syllable. Robert Frost’s “Stopping by the Woods on a Snowy Evening” consists of lines made up of four sequential iambs e.g. “Whose woods / these are / I think / I know”. With a sequence of four iambs, the poem’s structure is described as iambic tetrameter.

4. Owner of Shopping.com : EBAY
Shopping.com is one of those comparison shopping websites. It allows you to compare prices for the same product at many different online retailers. It’s very useful for those of us who prefer online shopping to visiting a brick and mortar store.

5. World leader who was Time magazine’s 1977 Man of the Year : SADAT
Anwar Sadat was the third President of Egypt right up to the time of his assassination in 1981. Sadat won the Nobel Peace Prize in 1978 along with Israeli Prime Minister Menachem Begin for the role played in crafting the Israel-Egypt Peace Treaty of 1978 at Camp David. It was this agreement that largely led to Sadat’s assassination three years later.

7. Uruguayan uncles : TIOS
The official name of Uruguay is the Oriental Republic of Uruguay, reflecting the country’s location on the eastern coast of South America. It is a relatively small country, the second smallest on the continent, after Suriname. In 2009, Uruguay became the first country in the world to provide a free laptop and Internet access to every child. Now there’s a thought …

8. Fetal development test, for short : AMNIO
Amniocentesis is the prenatal test which involves the removal of a small amount of the amniotic fluid surrounding the fetus using a hypodermic needle. The fluid naturally contains some fetal cells, the DNA of which can then be tested to determine the sex of the child and to check for the presence of genetic abnormalities.

10. Often-torn body part in sports, briefly : ACL
The anterior cruciate ligament (ACL) is one of four major ligaments that support the knee.

11. Participants at many baptisms : GODPARENTS
Baptism is a rite in Christian traditions admitting a candidate, often an infant, into the Church. The ceremony usually uses water as a sign of purification. Water may be poured on the head, or the candidate may be totally immersed in water.

15. Wing: Prefix : PTERO-
The prefixes pter- and ptero- mean “pertaining to a wing, or a feather”, coming from the Greek word “pteron” (feather). Examples of use would be in the words “pterosaur” and “pterodactyl”.

18. ___ session (meeting after a legislative dissolution) : RUMP
The rump of an animal is its hindquarters, its tail end. The term can also mean “remnant”, from the sense of a tail piece. This sense of “remnant” gives rise to the phrases “rump session” and “rump legislature”. A rump legislature is a remnant of a full legislature, a session that is held after the true legislature has dissolved.

40. Having no chance for success, as a proposal, for short : DOA
Dead on arrival (DOA)

50. Funny Silverman : SARAH
Sarah Silverman is a comedian, but also a singer and actress. Her material is very “edgy”, as she takes on social taboos such as racism, sexism and religion. She had a celebrity boyfriend for five years as she dated Jimmy Kimmel starting in 2002, soon after Kimmel’s divorce from his first wife.

52. Dominican, e.g. : FRIAR
The Order of Preachers is a Roman Catholic religious order that is often referred to as the Dominicans. The order was founded in France in 1216 by a Spanish priest called Saint Dominic de Guzman.

55. Variety of cotton : PIMA
Pima is a soft cotton that is very durable and absorbent. Pima cotton is named after the Pima Native Americans who first cultivated it in this part of the world.

57. Figure that’s unbelievable? : YETI
A yeti is a beast of legend, also called an abominable snowman. “Yeti” is a Tibetan term, and the beast is fabled to live in the Himalayan regions of Nepal and Tibet. Our equivalent legend in North America is that of Bigfoot, also known as Sasquatch. The study of animals whose existence have not yet been substantiated is called cryptozoology.