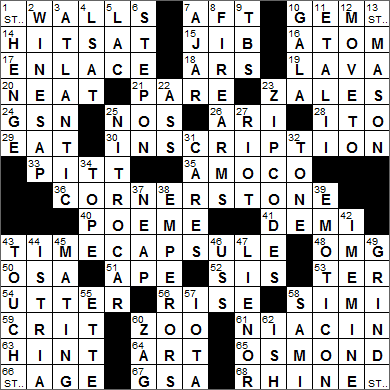 CROSSWORD SETTER: Jules P. Markey
THEME: Cornerstones … we have a rebus puzzle today, with the word STONE appearing in each of the four corner squares. These “stones” are represented by “ST..” in my grid:

36A. Where one might find a date … with a hint to this puzzle’s theme : CORNERSTONE
30A. Writing on a 36-Across : INSCRIPTION
43A. Something found behind a 36-Across : TIME CAPSULE

Today’s Wiki-est, Amazonian Googlies
Across
1. Takes the fifth, perhaps : STONEWALLS
“To plead the Fifth” is to take advantage of the legal protection provided by the Fifth Amendment of the US Constitution, part of the Bill of Rights. As a result of the Amendment, an individual can refuse to answer questions that could provide self-incriminating evidence of an illegal act.

7. Like a spanker’s position on a ship : AFT
On a square-rigged sailing vessel, a spanker is a sail rigged behind the aft-most mast on the ship.

10. Turquoise, e.g. : GEMSTONE
“Turquoise” is the Old French word for “Turkish”. The name was given to the blue mineral because much of it was brought into Europe from Turkey, although most of the turquoise mines were located in the Khorasan Province of Iran.

15. Bow attachment : JIB
A jib is a triangular sail that is set at the bow of a sailboat.

23. Big name in jewelry : ZALES
The first Zales jewelry store was opened by Morris and William Zale and Ben Lipshy in Wichita Falls, Texas, in 1924. Zales became successful largely by offering credit to their customers, a revolutionary concept at the time.

25. Most slush pile responses : NOS
In the world of publishing, the slush pile is the collection of unsolicited manuscripts that have been submitted by hopeful authors.

26. Cardinals’ home, on scoreboards : ARI
The Arizona Cardinals were founded in 1898 as the Chicago Cardinals. That makes the Cardinals the oldest, continuously-run professional football team in the whole country.

33. British P.M. during the Seven Years’ War : PITT
William Pitt, the Elder was the Prime Minister of Great Britain from 1766 to 1768. Although a prominent figure in British politics for many years, he refused to accept a title until he took over government of the country. For this refusal, he earned the nickname “The Great Commoner”. It was William Pitt, the Elder who lent his name to the city of Pittsburgh, Pennsylvania.

What the British call the Seven Years’ War is usually called the French and Indian War over here in the US. In the broader context, the war was fought between alliances led by Britain and France, and in the American theater was fought between British and French forces alongside their Native American allies.

35. 1998 BP acquisition : AMOCO
Amoco is an abbreviation for the American Oil Company. Amoco was the first oil company to introduce gasoline tanker trucks and drive-through filling stations. I wonder did they know what they were starting …?

40. Part of Rimbaud’s oeuvre : POEME
Arthur Rimbaud was a poet from France who was active in the latter half of the 19th century. Rimbaud was described by Victor Hugo as “an infant Shakespeare”.

The sum of an artist’s work in his or her lifetime is known as his or her “oeuvre”.

41. ___-glace (rich sauce) : DEMI
Demi-glace is a sauce that’s rich and brown, and is used in French cuisine. The name translates as “half glaze” and comprises veal stock mixed with espagnole sauce. It’s a little more work to make demi-glace, as one has to also make an espagnole sauce as one of the main ingredients. As a result, some chefs just use a veal stock instead, which Julia Child used to call a “semi-demi-glace”.

52. Dot, to Ditto, in “Hi and Lois” : SIS
“Hi and Lois” is a comic strop that first appeared in 1954 and is still running today. The strip was created by Mort Walker (also known for “Beetle Bailey”) and was originally illustrated by Dik Browne (also known for “Hägar the Horrible”). The title characters Hi and Lois Flagstone first appeared in “Beetle Bailey”. Lois is Beetle’s sister, and the characters occasionally show up in each other’s strip.

58. California’s ___ Valley : SIMI
Nowadays Simi Valley, California is perhaps best known as being home to the Ronald Reagan Presidential Library. If you ever get the chance to do so, the library is a great place to visit. There you can tour one of the retired Air Force One planes.

61. B3 : NIACIN
Niacin is also known as vitamin B3. A deficiency of niacin causes the disease pellagra. Pellagra is often described by “the four Ds”, the symptoms being diarrhea, dermatitis, dementia and death.

65. Part of a singing family : OSMOND
The Osmond Brothers were performing at Disneyland in the early sixties when they were spotted by Andy Williams’ father. He was so impressed by their performance that he told Andy to book them on his TV show, after which they became regulars from 1962-69.

66. Antediluvian : STONE-AGE
Ancient societies can be classified by the “three-age system”, which depends on the prevalence of materials used to make tools. The three ages are:

Something “antediluvian” is very old. The term comes from “ante” meaning “before” and “diluvium” meaning “flood”. The idea is that something really old took place before Noah’s Flood.

67. Fed. management grp. : GSA
The US Government’s General Services Administration (GSA), as the name suggests, provides general services to other federal agencies. So for example, the GSA manages office space for the other agencies, and transportation.

68. Part of many a country singer’s outfit : RHINESTONE
A rhinestone is a colorless artificial gem made from paste or glass. The original rhinestones were rock crystals that were gathered from the river Rhine in Germany.

Down
1. World Heritage Site that’s more than 4,000 years old : STONEHENGE
The magnificent Stonehenge monument in the south of England was built from 3000 to 2000 BC. “Stonehenge” has given its name to “henges”, a whole class of earthenwork monuments that are circular in form with an internal ditch surrounded by a bank. Paradoxically, Stonehenge doesn’t qualify as a henge by this contemporary definition, as its earthen bank is surrounded by an external ditch.

2. Apple type : WINESAP
A winesap is a small and tart apple, one often used for making cider.

3. Neighbor of Ventnor on a Monopoly board : ATLANTIC
Atlantic and Ventnor Avenue are properties in the game of Monopoly. The street names in the US version of Monopoly are locations in or around Atlantic City, New Jersey.

4. Hurdle for an aspiring “Esq.” : LSAT
The Law School Admission Test (LSAT) has been around since 1948.

7. Not wide open : AJAR
Our word “ajar” is thought to come from Scottish dialect, in which “a char” means “slightly open”.

I hear that the wording and punctuation in the original text has led to some controversy over the years, some debate over the original intent …

9. Cable inits. for sports and comedy : TBS
The tbs cable television station started out in 1967 as local broadcast TV station in Atlanta. The station’s first call letters were WJRJ-TV, and this was changed to WTCG in 1970 when it was acquired by Ted Turner (the TCG stood for Turner Communications Group). In 1976, Turner started distributing WTCG via satellite making its programming available in other parts of the country. WTCG was only the second channel to transmit via satellite, following HBO. The difference was that WTCG was broadcast without requiring a premium subscription. The station’s call sign was changed again in 1979, to WTBS, and in 1981 adopted the moniker “Superstation WTBS”.

10. Ritzy shindig : GALA
“Shindig” is such a lovely word, I think, describing a party that usually includes some dancing. Although its origin isn’t really clear, the term perhaps comes from “shinty”, a Scottish game similar to field hockey.

23. Letter numbers : ZIP CODES
ZIP codes were introduced in 1963. The acronym ZIP stands for Zone Improvement Plan, a name indicating that mail travels more efficiently when the codes are included in the postal address.

25. Certain dragster : NITRO CAR
Laughing gas is the common name for nitrous oxide. Nitrous oxide is used as an anesthetic, particularly by dentists. It is also used in motor racing to increase the power output of engines. Laughing gas was first synthesized by the English chemist Joseph Priestly, but it was Humphrey Davy who discovered its potential as an anesthetic. Once it was realized that the gas could give the patient a fit of the giggles, “laughing gas parties” became common among those could afford them.

34. Imbibe : TOPE
“To tope” is to drink alcohol excessively and habitually.

39. Means of communication using dots and dashes : EMOTICON
An emoticon is a glyph created using text characters to represent facial features, and usually oriented sideways. The emoticon is designed to indicate emotion or attitude. The classic example is the smiley face 🙂

42. George Harrison’s autobiography : I ME MINE
“I Me Mine” is one of the relatively few Beatles songs to have been written by George Harrison (and indeed performed by him). Harrison chose the same title for his autobiography, published in 1980 just a few weeks before John Lennon was assassinated in New York City.

43. Standard of comparison : TOUCHSTONE
A “touchstone” is an excellent example of something, a sample that is used to test the excellence or genuineness of other samples, a standard.

46. Beginning of the Constitution? : USS
“Old Ironsides” was a nickname given to the USS Constitution even though she is actually a wooden-hulled ship. The Constitution was launched in 1797 and can still be seen at sea today. She is the oldest commissioned naval vessel in the world. You can visit Old Ironsides at the Boston Navy Yard, where I had the privilege of touring her in 2011. As an old sailor, I’d say she is the best-maintained ship I’ve ever been on and paradoxically, she is also the oldest. Really, really beautiful …

47. Note holder, of sorts : LIENOR
A lien is the right that one has to retain or secure someone’s property until a debt is paid.

57. Smidgen : IOTA
Iota is the ninth letter in the Greek alphabet. We use the word “iota” to portray something very small as it is the smallest of all Greek letters.

Our word “smidgen”, meaning a small amount, might come from the Scots word “smitch” that means the same thing or “a small insignificant person”.

58. Laplander : SAMI
Lapland is a geographic region in northern Scandinavia, largely found within the Arctic Circle. Parts of Lapland are in Norway, Sweden and Finland. The people who are native to the region are called the Sami people. The Sami don’t like to be referred to as “Lapps” and they regard the term as insulting.