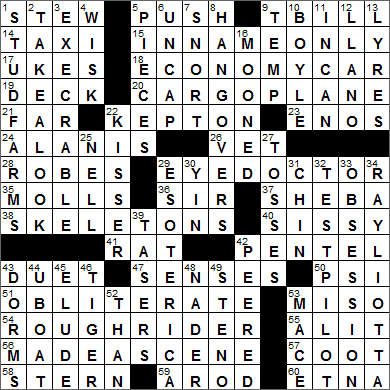 Today’s Wiki-est, Amazonian Googlies
Across
9. Single-price auction purchase, informally : T-BILL
A Treasury note (T-Note) is a government debt that matures in 1-10 years. A T-Note has a coupon (interest) payment made every six months. The T-note is purchased at a discount to face value, and at the date of maturity can be redeemed at that face value. A T-Bill is a similar financial vehicle, but it matures in one year or less, and a T-Bond matures in 20-30 years.

17. Strummed instruments, for short : UKES
The ukulele (“uke”) originated in the 1800s and mimicked a small guitar brought to the Hawaiian Islands by Portuguese immigrants.

The Book of Jubilees is an account of the world from creation to the history that exists in parallel to the Book of Genesis and Exodus in the Bible. Jubilees was written in the second century BC.

24. “You Learn” singer Morissette : ALANIS
Alanis Morissette is a Canadian singer-songwriter. After releasing two pop albums in Canada, in 1995 she recorded her first album to be distributed internationally. Called “Jagged Little Pill”, it is a collection of songs with more of a rock influence. The album was a huge success, the highest-selling album of the 1990s, and the highest-selling debut album by any artist at any time (selling over 30 million units).

26. Fact-check : VET
The verb “to vet” comes from the term “veterinarian”. The idea is that to “vet” something is to subject it to careful examination, like a veterinarian checking out an animal.

35. Unlawful partners : MOLLS
The slang term “moll” is a used for the female companion of a gangster. “Moll” is short for “Molly”, which is a nickname for “Mary”. In 17th century England a moll was a prostitute.

36. British Empire honoree : SIR
The British Empire was the largest empire in history. Tt its height, the empire covered almost 25% of the Earth’s land mass, with “control” of about 20% of the world’s population.

37. Queendom in I Kings : SHEBA
Sheba is referenced in the Bible several times. The “Queen of Sheba” is mentioned as someone who traveled to Jerusalem to behold the fame of King Solomon. No one knows for sure where the kingdom of Sheba was located, although there is evidence that it was actually the ancient Semitic civilization of Saba. The Sabeans lived in what today is Yemen, on the Arabian Peninsula.

42. Maker of markers : PENTEL
Pentel is Japanese company that is known for manufacture of pens and markers.

50. Unit of pressure: Abbr. : PSI
Pounds per square inch (PSI) is a measure of pressure.

53. Soup flavoring : MISO
Miso is the name of the seasoning that makes the soup. Basic miso seasoning is made by fermenting rice, barley and soybeans with salt and a fungus to produce a paste. The paste can be added to stock to make miso soup, or perhaps to flavor tofu.

57. Symbol of baldness : COOT
Someone might be described as “bald as a coot”, meaning that the person has no hair at all. A coot is a water bird, one that looks as though it is bald because of its markings. The head is actually covered with feathers.

59. Biogenesis scandal figure of ’13 : A-ROD
The Biogenesis baseball scandal is the story that broke in 2013 in which several professional baseball players were accused of using performance-enhancing drugs supplied by a clinic called Biogenesis of America. The highest-profile player caught up in the scandal is Alex Rodriguez (A-Rod) of the New York Yankees.

60. Zeus trapped Typhon under it : ETNA
Typhon was known as the “father of all monsters” in Greek mythology, and he was married to the “mother of all monster”, Echidna. Typhon had a huge human torso with a hundred dragon heads. His lower body was made up of gigantic viper coils. Although all the gods feared Typhon, Zeus finally defeated him and trapped him underneath Mount Etna.

Down
1. Breeding grounds : STUD FARMS
The word “stud”, meaning “a male horse kept for breeding”, is derived from the Old English word “stod”, which described a whole herd of horses.

8. Party followers, perhaps : HANGOVERS
The main cause of hangover symptoms seems to be dehydration. Ethanol causes increased urine production, leaving the body short of water and resulting in headaches, dry mouth and a lack of energy. The symptoms can be alleviated by drinking a lot of water.

10. Philosopher Robert who wrote “The Sceptical Chymist” : BOYLE
Irishman Robert Boyle is regarded as one of the founders of modern chemistry, although his early work would better be described as “alchemy”. His name is best known from Boyle’s Law, his experimental observation that the pressure of a gas decreases proportionally as its volume increases.

Robert Boyle’s “The Sceptical Chymist” was published in 1661. The main hypothesis presented by Boyle was that matter consisted of atoms that were constantly in motion, and that the physical behavior of matter was the result of collisions of those moving particles.

11. Like the sun god Inti : INCAN
Inti was the sun god worshiped by the Incas. Images depicting Inti are featured on the national flags of several nations, including Argentina and Uruguay.

13. Strummed instruments : LYRES
The lyre is a stringed instrument most closely associated with Ancient Greece, and with the gods Hermes and Apollo in particular. According to myth, Hermes slaughtered a cow from a sacred herd belonging to Apollo and offered it to the gods but kept the entrails. Hermes used the entrails to make strings that he stretched across the shell of a tortoise, creating the first lyre. Apollo liked the sound from the lyre and agreed to accept it as a trade for his herd of cattle.

32. Former job of each member of the Mercury Seven : TEST PILOT
The Mercury Seven was the name given to the original lineup of NASA astronauts. Several members of the 7-man team actually flew on all the major NASA programs: Mercury, Gemini, Apollo and the Space Shuttle. The seven astronauts were:

“Field of Dreams” is a fantasy drama about baseball, released in 1989 and starring Kevin Costner. “Field of Dreams” was also the last film in which Burt Lancaster made an appearance. The baseball stadium that was built for the movie can be visited in Dubuque County, Iowa.

39. Police armory supply : TASERS
Victor Appleton wrote a novel for young adults called “Tom Swift and His Electric Rifle”. The company that developed the TASER electroshock weapon named its product as a homage to the novel. The acronym TASER stands for “Thomas A. Swift’s Electric Rifle”.

44. Battle of the Atlantic craft : U-BOAT
U-boat stands for the German “Unterseeboot” (undersea boat). U-boats were primarily used in WWII to enforce a blockade against enemy commercial shipping, with a main objective being to cut off the supplies being transported to Britain from the British colonies and the US. The epic fight for control of the supply routes became known as the Battle of the Atlantic.

48. Critical Mass Energy Project founder : NADER
Ralph Nader has run as a third-party candidate for the office of President of the United States four times now, in every election from 1996 to 2008. Nader’s name was first first linked with the presidential race in 1971, when the famous Dr. Benjamin Spock offered to stand aside as candidate in the 1972 race if Nader would agree to run, but he declined.

49. Old-style office job : STENO
Stenography is the process of writing in shorthand. The term comes from the Greek “steno” (narrow) and “graphe” (writing).

53. Irritating stuff : MACE
Mace is actually a brand name, originally introduced by Lake Erie Chemical when they started to manufacture “Chemical Mace”, with the name being a play on the club-like weapon from days of old. Mace was originally a form of tear gas, but Mace today uses a formula that is actually a pepper spray.