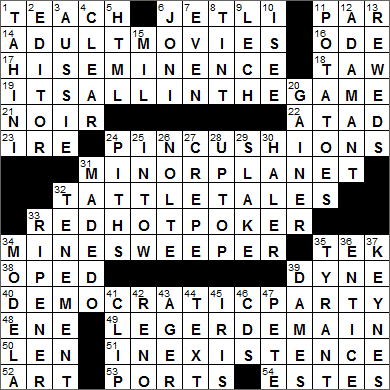 Today’s Wiki-est, Amazonian Googlies
Across
6. “Fearless” star, 2006 : JET LI
The actor Jet Li’s real name is Li Jian Jie. Jet Li is a martial artist and international film star from Beijing, China. Li played a villain in “Lethal Weapon 4”, and had a leading role in the 2000 movie “Romeo Must Die”.

16. Panegyrical lines : ODE
A “panegyric” was originally a formal speech made in public, the intent of which was to praise some person of some entity. Later, the term came to mean a laudatory verse, such as an ode. “Panegyris” is the Greek for “speech fit for a general assembly”.

17. What to call a cardinal : HIS EMINENCE
The College of Cardinals in the Roman Catholic church acts as an advisory group to the Pope. Each of the cardinals usually have an additional responsibility, usually leadership of a diocese or archdiocese. It is the College of Cardinals that is responsible for choosing a new pope, as required.

18. Shooter for kids : TAW
In the game of marbles, the “taw” is the shooting marble, and is shot at the “ducks”.

19. 1958 #1 hit composed by Vice President Charles Dawes : IT’S ALL IN THE GAME
“It’s All in the Game” is a 1951 song with lyrics by Carl Sigman. The music is a 1911 composition called “Melody in A Major” by Charles Dawes, who was destined to become Vice President of the US under Calvin Coolidge. I love this song, and in particular a version recorded by English pop star Cliff Richard in 1963 …

22. Slightly : A TAD
Back in the 1800s “tad” was used to describe a young child, and this morphed into our usage of “small amount” in the early 1900s. The original use of “tad” for a child is very likely a shortened version of “tadpole”.

31. Pluto, for one : MINOR PLANET
Pluto was discovered in 1930, and was welcomed as the ninth planet in our solar system. Pluto is relatively small in size, just one fifth of the mass of our own moon. In the seventies, astronomers began to discover more large objects in the solar system, including Eris, a “scattered disc object” at the outer reaches. Given that Eris is actually bigger than Pluto, and other objects really aren’t that much smaller, Pluto’s status as a planet was drawn into question. In 2006 there was a scientific definition for a “planet” agreed for the first time, resulting in Pluto being relegated to the status of “dwarf planet”, along with Eris.

35. Sci-fi narcotic : TEK
The “Tekwar” series of science-fiction novels was co-authored by Ron Goulart and the actor William Shatner, although it’s only Shatner’s name that appears on the book covers. The stories center around the microchip “drug” called “tek” which dominates the Tekwar universe.

39. 10 micronewtons : DYNE
A dyne is a unit of force. The name “dyne” comes from the Greek “dynamis” meaning “power, force”.

Newtons are units of force. The newton is of course named for Sir Isaac Newton, the English physicist and mathematician.

40. Group for people who are feeling blue? : DEMOCRATIC PARTY
On political maps, red states are Republican and blue states Democrat. The designation of red and blue states is a very recent concept, only introduced in the 2000 presidential election by TV journalist, the late Tim Russert. In retrospect, the choice of colors is surprising, as in other democracies around the world red is usually used to describe left-leaning socialist parties (the reds under the bed!), and blue is used for conservative right-wing parties. In election cycles, swing/battleground states are often depicted in purple.

48. Sierra Leone-to-Burkina Faso dir. : ENE
The Republic of Sierra Leone is a country in West Africa, lying on the Atlantic Coast. The capital city of Freetown was originally set up as a colony to house the “Black Poor” of London, England. These people were mainly freed British slaves of Caribbean descent who were living a miserable life in the run-down parts of London. Perhaps to help the impoverished souls, perhaps to rid the streets of “a problem”, three ships were chartered in 1787 to transport a group of blacks, with some whites, to a piece of land purchased in Sierra Leone. Those who made the voyage were guaranteed British citizenship and protection. The descendants of these immigrants, and others who made the journey over the next 60 years, make up the ethnic group that’s today called the Sierra Leone Creole.

49. Hocus-pocus : LEGERDEMAIN
Legerdemain is a term used for “sleight of hand”, the set of techniques used by magicians to manipulate objects such as cards or coins. The term comes from the Middle French “léger de main” that translates as “light of hand”.

52. “The proper task of life,” per Nietzsche : ART
Friedrich Nietzsche was a German philosopher. Not my cup of tea …

53. Modern connection points : PORTS
In the world of computing, a port is a interface between the computer and a peripheral or other computer. A port is also the female part of the connection.

54. Newbery Medal-winning author Eleanor : ESTES
Eleanor Estes started writing children’s books when she was bedridden, recovering from tuberculosis. By the time she died in 1988, she had written 20 books, including one novel for adults. Her most lauded title is “Ginger Pye” published in 1951.

Down
1. Falafel topper : TAHINI
“Tahini” is the Arabic name for the paste made from ground sesame seeds. Tahini is a major ingredient in hummus, one of my favorite dishes.

Falafel is a fried ball of ground chickpeas or fava beans served in pita bread. I love chickpeas, but falafel just seems too dry to me.

3. Kiwi’s neighbor : AUSSIE
Unlike many nicknames for people of a particular country, the name “Kiwi” for a New Zealander isn’t offensive at all. The term comes from the flightless bird called the kiwi, which is endemic to New Zealand and is the country’s national symbol. “Kiwi” is a Maori word, and the plural (when referring to the bird) is simply “kiwi”. However, when you have two or more New Zealanders with you, they are Kiwis (note the “s”, and indeed the capital “K”!).

5. Code with tags : HTML
HTML is HyperText Markup Language, the language used to write most Internet web pages (including this one). Elements in a web page are written between “tags”. For example, a “p” tags are used to define “paragraph” elements, and “h” tags (such as h1, h2 and h3) define “headlines”.

6. Mitchell with the platinum album “Blue” : JONI
Joni Mitchell is a Canadian singer and songwriter from Fort MacLeod in Alberta. Mitchell is perhaps best known for her recordings “Big Yellow Taxi” and “Woodstock”.

The word “lecher”, one who debauches, came into English in the 12th century. The original word in Old French was “lecheor”, literally “licker”.

11. Fries things? : POTATOES
“French fries” are called “chips” back in the British Isles where I grew up. In France, they’re called “pommes frites” (“fried potatoes”).

One G is one grand, one thousand dollars …

20. It’s a dive : GAINER
A gainer is a dive in which the diver leaves the board while facing forward, but makes a backward somersault, entering the water feet first.

26. People’s 1992 Sexiest Man Alive : NOLTE
The actor Nick Nolte got his first big break playing opposite Jacqueline Bisset and Robert Shaw in “The Deep”, released in 1976. Prior to that he had worked as a model, and in fact appeared in a magazine advertisement for Clairol in 1972 alongside fellow model Sigourney Weaver.

27. Brunch offering : CREPE
“Crêpe” is the French word for “pancake”.

28. High-five request : UP TOP!
The celebratory gesture that we call a “high-five” is said to have been invented by former baseball players Dusty Baker and Glenn Burke when they were both playing for the Los Angeles Dodgers in the later 1970s.

29. Satisfy : SLAKE
“To slake” is to satisfy a craving, as in slaking one’s thirst.

30. Comparatively sound : HALER
“Hale” is an adjective meaning “healthy”. Both the words “hale” and “healthy” derive from the the Old English “hal” meaning healthy.

32. Place where people lived in “How the Other Half Lives” : TENEMENT
Jacob Riis is famous for his photographs and newspaper articles that highlighted the plight of the impoverished in New York City. He wrote “How the Other Half Lives”, originally an extensive article that appeared in “Scribner’s Magazine” at Christmas 1889. The article had such an impact that Riis was commissioned to expand it into a book, which was published the following year.

34. Detroit debut of 1927 : MODEL A
The Ford Model A was the original car produced by the Ford Motor Company. The first production run lasted from 1903 to 1904, when it was replaced by the Model C. The name “Model A” was brought back in 1927 and used for the successor to the Model T.

36. Be coquettish with : ENTICE
A “coquet” is a male flirt, with “coquette” being a female flirt. The word comes from French, and is the diminutive of “coq”, the word for a cock. A cock might well be accused of “strutting his stuff” around the chicken run.

37. Macroeconomics pioneer : KEYNES
John Maynard Keynes was a British economist. Keynes argued that a country’s economy could and should be managed by fiscal and monetary policy in order to mitigate the effects of inevitable recessions and depressions.

39. Women, in pulp fiction : DAMES
“Pulp fiction” was the name given to cheap, fiction magazines that were popular from the late 1890s up to the 1950s. The phrase comes from the inexpensive wood pulp paper that was used for the publications. The upmarket equivalent, was printed on fine glossy paper.

42. Member of Clinton’s cabinet for all eight years : RENO
Janet Reno was Attorney General of the US from 1993 to 2001. Reno was the person to hold the office second longest, and was our first female Attorney General. In 2002, Reno ran for Governor of Florida but failed to win the Democratic nomination. Thereafter she retired from public life.

43. New ___ : AGER
New-Age music is created to provide a relaxing and stress-free atmosphere. The New Age movement is often said to have begun with the release of an album called “Spectrum Suite” by Steven Halpern in 1975.

45. Long-stemmed flower : IRIS
Iris is a genus of flowering plants that come in a wide variety of flower colors. The term “iris” is a Greek word meaning “rainbow”.

46. There’s not much interest in these nowadays : CDS
A certificate of deposit (CD) is like a less-flexible and higher-paying savings account. Instead of depositing money into a savings account and earning interest periodically, one can open a CD. With a CD one deposits a minimum amount of money but must leave it there for a specified length of time. In return for committing the funds for a fixed period, one is given a higher interest rate than a savings account and can redeem that interest and the initial deposit when the term has expired. CDs are relatively low-risk investments as they are FDIC insured, just like savings accounts.

47. Best of classic rock : PETE
Musician Pete Best is most famous as the first drummer with the Beatles. Famously, Best was sacked from the band by manager Brian Epstein. However, Epstein took this step reluctantly, and at the request of Lennon, McCartney and Harrison. Several stories have emerged about why the decision was made, but it seems that record producers at Parlophone were insisting that a session drummer be used in the band’s first recordings, and things snowballed from there. And of course, Best was soon replaced by Ringo Starr.