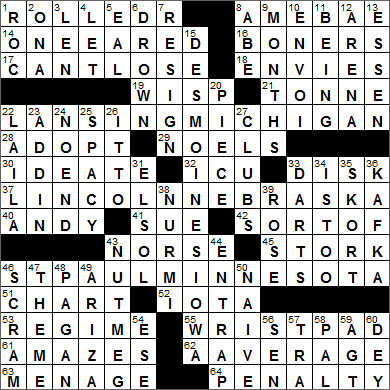 8. Lives in a cell? : AMEBAE
An ameba (or “amoeba” as we spell it back in Ireland) is a single-celled microorganism. The name comes from the Greek “amoibe”, meaning change. The name is quite apt, as the cell changes shape readily as the ameba moves, eats and reproduces.

14. Like the praying mantis, anatomically [weird, but true] : ONE-EARED
The term “praying mantis” is often used for species of insects more correctly called simply “mantises”. The familiar term refers to the prayer-like posture adopted by the insect with their fore-limbs folded. Strangely, the praying mantis is the only animal that we know with only one ear. That ear is located deep in the thorax or chest.

16. Goofs : BONERS
“Boner” is one of those words that I just don’t like because it can be used offensively. The term can be used to mean a faux pas, an error.

22. Midwest capital #1 : LANSING, MICHIGAN
Lansing, Michigan is unique among US state capitals in that it is not a county seat, even though it is located in Ingham County. The Ingham county seat is Mason, Michigan.

29. Many radio songs after Thanksgiving : NOELS
“Noël” is the French word for the Christmas season, ultimately coming from the Latin word for “birth” (natalis). Noel has come to be used as an alternative name for a Christmas carol.

33. U.F.O. shape : DISK
In 1952, the USAF revived its studies of reported sightings of unidentified flying objects (UFOs) in a program called Project Blue Book. Project Blue Book ran from 1952 until it was shut down in 1969 with the conclusion that there was no threat to national security and that there were no sightings that could not be explained within the bounds of modern scientific knowledge.

37. Midwest capital #2 : LINCOLN, NEBRASKA
The city of Lincoln is the second-largest in Nebraska, and is the state capital. In the days of the Nebraska Territory, the capital was the larger city of Omaha. When the territory was being considered for statehood, most of the population (which lived south of the River Platte) was in favor of annexation to Kansas. The pro-statehood legislature voted to move the capital nearer to that population in a move intended to appease those favoring annexation. As this conflict was taking place just after the Civil War, a special interest group in Omaha arranged for the new capital to be named Lincoln, in honor of the recently-assassinated president. The thought was that the populace south of the River Platte had been sympathetic to the Confederate cause and so would not pass the measure to move the capital if the Lincoln name was used. But the measure passed, the capital was moved, and Nebraska became the thirty-seventh State of the Union in 1867.

40. Samberg formerly of “S.N.L.” : ANDY
Andy Samberg is an actor and comedian who was a “Saturday Night Live” cast member from 2005 until 2012. Samberg also plays the lead on the police sitcom “Brooklyn Nine-Nine”.

43. Like early visitors to modern Nova Scotia : NORSE
Leif Erikson was a Norse explorer and was the first European to land in North America, some 500 years before Christopher Columbus’s landing in 1492. The Norsemen named the area they discovered “Vinland”, which might translate as “Wine Land” or “Pasture Land”. Erikson built a small settlement called Leifsbudir, which archaeologists believe they have found in modern day Newfoundland, at L’Anse aux Meadows. The settlement discovered in Newfoundland is definitely Norse, but there is some dispute over whether it is actually Erikson’s Leifsbudir.

45. Illustration on many a birth announcement : STORK
In German and Dutch society, storks resting on the roof of a house were considered a sign of good luck. This tradition led to nursery stories that babies were brought to families by storks.

46. Midwest capital #3 : ST PAUL, MINNESOTA
Saint Paul that is the state capital of Minnesota, and is one half of the “Twin Cities” or Minneapolis-Saint Paul. Saint Paul used to be called Pig’s Eye, named after a popular tavern in the original settlement in the area. In 1841, Father Lucien Galtier established a log chapel nearby that he dedicated to St. Paul the Apostle, giving the city it’s current name. The magnificent Cathedral of St. Paul now sits on the site where the log chapel was built.

53. Junta, e.g. : REGIME
A junta is a group of military officers that rule a country, usually after having seized power forcibly. “Junta” is a Spanish word meaning “council”.

63. Group of people living together : MENAGE
“Ménage” is the French word for “household”. The familiar term “ménage à trois” translates as “household of three” and is used to describe a domestic arrangement in which three people having sexual relations occupy the same household.

Down
1. Mythical bird with an enormous wingspan : ROC
The mythical roc is a huge bird of prey, reputedly able to carry off and eat elephants. The roc was said to come from the Indian subcontinent. The supposed existence of the roc was promulgated by Marco Polo in the accounts that he published of his travels through Asia.

3. Spy novelist Deighton : LEN
I used to walk my dog right past author Len Deighton’s house years ago, as we lived in the same village in Ireland (probably my only claim to fame!). Deighton wrote the excellent espionage thriller “The IPCRESS File”, made into a 1965 movie starring Michael Caine.

8. First prez to sport a beard : ABE
There is a story that just before Abraham Lincoln was elected president in 1860, he received a letter from a 12-year-old girl who criticized Lincoln’s appearance and his pock-marked, gaunt face. The little girl, Grace Bedell from New York, promised to get her brothers to vote for Lincoln if he would just grow a beard. However, Lincoln waited until after the election to grow his famous whiskers, a distinctive look that would forever be associated with his presidency.

10. Final stanza in a poem : ENVOI
An envoy (also “envoi”) is a short closing stanza in some works of poetry.

15. Midwest capital #4 : DES MOINES, IOWA
The city of Des Moines is the capital of Iowa, and takes its name from the Des Moines River. The river in turn takes its name from the French “Riviere des Moines” meaning “River of the Monks”. It looks like there isn’t any “monkish” connection to the city’s name per se. “Des Moines” was just the name given by French traders who corrupted “Moingona”, the name of a group of Illinois Native Americans who lived by the river. However, others do contend that French Trappist monks, who lived a full 200 miles from the river, somehow influenced the name.

22. Boxer Ali : LAILA
Laila Ali is the daughter of the great Muhammad Ali and is a very capable boxer in her own right. Laila is not a bad dancer either, coming in third place in the fourth season of “Dancing with the Stars”.

23. Computer extra : ADD-IN
A plug-in or add-in is a piece of software that adds features to an existing application.

31. Symbol on the flag de Argentina : EL SOL
The flag of Argentina is composed of three horizontal bands, light blue on the top and bottom, and white across the middle. The simpler version of the flag just has these three bands. The full version of the flag includes a sun in the center of the white band.

33. Game of motor precision that, strangely enough, is often played while inebriated : DARTS
Darts is a wonderful game often played in English and Irish pubs, even over here in America. The scoring in a traditional game of darts is difficult to describe in a sentence or two, but the game of darts called “Round the Clock” is simply hitting the numbers 1 through 20 in sequence.

35. Women’s tennis garment : SKORT
Skorts are a hybrid between shorts and a skirt.

36. “The Trial” author : KAFKA
Franz Kafka was born in 1883 in Prague, then part of Bohemia and today the capital of the Czech Republic. Kafka is known as one of the greatest novelists who worked in the German language, and even has an adjective named after him. Something that is “kafkaesque” is senseless, disorienting and may have menacing complexity. As it was for many great artists, Kafka’s fame came after his death when much of his work was published.

38. Paavo ___, the Flying Finn of 1920s Olympics : NURMI
Paavo Nurmi was one of a group of Finnish runners to earn the nickname “the Flying Finn”. Nurmi dominated middle and long distance running in the 1920s. He was the most successful athlete at the 1924 Paris Olympics, winning five gold medals.

39. Jack’s love in “Titanic” : ROSE
When James Cameron made his epic movie “Titanic”, released in 1997, it was the most expensive film ever made, costing about $200 million. It was a good investment for the studio as it became the highest-grossing film of all time, bringing in over $1.8 billion. “Titanic” remained the highest-grossing film until 2010, when Cameron eclipsed the prior record with “Avatar”.

43. Eggnog ingredient : NUTMEG
The fruit of the nutmeg tree yields two very different spices. What we call “nutmeg” comes from the seed of the tree. “Mace” is the dried covering of the seed.

A noggin was the name of a small cup back in the 1600s that later lent its name to a small drink (and eventually to “eggnog”).

48. Polytheistic : PAGAN
A pagan is someone who holds religious beliefs that are different from the main religions of the world. In classical Latin “paganus” was a villager, a rustic.

49. Trevor of the N.B.A. : ARIZA
Trevor Ariza is a professional basketball player who has been turning out for the Houston Rockets since 2014. Ariza had also previously played for the Rockets from 2009 to 2010.

56. V.I.P. on the Hill: Abbr. : SEN
The United States Capitol is home to the US Congress, and sits on Capitol Hill in Washington, D.C. Pierre Charles L’Enfant laid out the nation’s new capital city. L’Enfant’s plans called for a “Congress House” as home for the legislative branch of the government. It was Thomas Jefferson who insisted that the name be changed to “Capitol”.