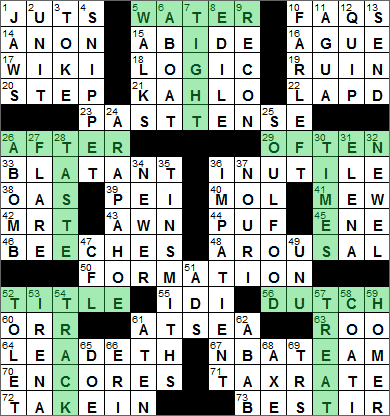 CROSSWORD SETTER: Jim Hilger
THEME: T-Formation … we have five pairs of themed answers, with the elements of each pair in a T-formation in the grid. Also, the paired answers intersect at the letter T:

50A. Following the nine black squares in the center of the grid, a hint to five pairs of answers in this puzzle : FORMATION

Today’s Wiki-est, Amazonian Googlies
Across
10. Online info sources : FAQS
Most websites have a page listing answers to Frequently Asked Questions (FAQ). There is a link to this blog’s FAQ page at the top-right of every page.

14. When Juliet tells the Nurse she will come in from the balcony : ANON
“Anon” originally meant “at once” and evolved into today’s meaning of “soon” apparently just because the word was misused over time.

I hear some noise within. Dear love, adieu.—
Anon, good Nurse!—Sweet Montague, be true.
Stay but a little. I will come again.

16. Chill producer : AGUE
An ague is a fever, one usually associated with malaria.

17. Popular online reference, for short : WIKI
A wiki is a website in which users are allowed to create and edit content themselves. The term “wiki” comes from the name of the first such site, introduced in 1994 and called WikiWikiWeb. “Wiki” is a Hawaiian word for “quick”, and is used because comprehensive content is created very quickly a there are so many collaborators contributing to the site.

18. Mr. Spock’s forte : LOGIC
Leonard Nimoy played the logical Mr. Spock in the original “Star Trek” television series. Spock has to be the most popular character on the show, and he keeps popping up in “Star Trek” spin offs to this day. Nimoy first worked alongside William Shatner (Captain Kirk) in an episode of “The Man from U.N.C.L.E.” (I loved that show!), with Nimoy playing a bad guy and Shatner playing an U.N.C.L.E. recruit.

21. Self-portraitist Frida : KAHLO
Frida Kahlo was a Mexican painter, famous for her self-portraits. She was married to the equally famous artist Diego Rivera. Kahlo was portrayed by the actress Salma Hayek in a film about her colorful life called “Frida” released in 2002.

22. “Lethal Weapon” force, briefly : LAPD
The “Lethal Weapon” series of film features Mel Gibson and Danny Glover in the lead roles. All four of the films in the series were directed by Richard Donner.

33. Not at all hidden : BLATANT
Something “blatant” is flagrant, brazenly obvious. The term was coined by Edmund Spenser in his 1596 poem “The Faerie Queen”. Spenser used “blatant” to describe a “thousand-tongued monster”, a metaphor for slander. It has been suggested that Spenser’s term was derived from the Latin verb “blatire” meaning “to babble”.

38. Defense grp. since 1948 : OAS
The Organization of American States (OAS) has its headquarters in Washington, D.C. All the independent states in the Americas are members of the group except Honduras, which had its membership suspended after the country’s 2009 coup.

39. J.F.K. Library architect : PEI
The John F. Kennedy Presidential Library is a splendid structure located right beside the Boston campus of the University of Massachusetts. President Kennedy chose the location for his library just one week before he was assassinated. The library itself was designed by architect I. M. Pei.

42. “Rocky III” actor (and an apt answer in this puzzle) : MR T
Mr. T’s real name is Laurence Tero Tureaud. Mr. T is famous for many things, including the wearing of excessive amounts of jewelry. He started this habit when he was working as a bouncer, wearing jewelry items that had been left behind by customers at a nightclub so that the items might be recognized and claimed. It was also as a bouncer that he adopted the name Mr. T. His catch phrase comes from the movie “Rocky III”. In the film, before he goes up against Rocky Balboa, Mr. T says, “No, I don’t hate Balboa, but I pity the fool”. He parlayed that line into quite a bit of success. He had a reality TV show called “I Pity the Fool”, and produced a motivational video called “Be Somebody … or Be Somebody’s Fool!”.

43. Wheat bristle : AWN
Awn is the name given to hair or bristle-like structures found in numerous species of plants. In some species, like barley, the awns can contain photosynthetic tissue.

44. Sta-___ fabric softener : PUF
Sta-Puf was a laundry rinse that was popular some decades ago. I don’t think that it’s around anymore …

45. Suffix with ethyl : -ENE
Ethylene (also called ethene) has a gazillion uses, including as an anesthetic and an aid to hastening the ripening of fruit. Ethylene’s most common use is as a major raw material in the manufacture of plastics (like polyethylene).

46. Trees with triangular nuts : BEECHES
The small triangular nuts of the beech tree are edible, but are very bitter. The nuts are called “beechmast” or simply “beechnuts”.

55. Exiled Amin : IDI
Idi Amin received most of his military training in the British armed forces, eventually achieving the highest rank possible for a Black African in the British Colonial Army in 1959, that of Warrant Officer. On his return to Uganda Amin joined his country’s military and quickly rose to the rank of Deputy Commander of the Army. During that time he was quite the athlete. He was a noted rugby player and swimmer, and for nine years held the Ugandan national light-heavyweight boxing title. By the early seventies, Amin was commander of all the armed forces of Uganda and in 1971 seized power in a military coup, displacing the country’s president Milton Obote. There followed seven years of brutal rule by Amin during which it is estimated that between 100,000 and 500,000 people were murdered. Amin was ousted from power in 1979 after a war with Tanzania, and fled to Libya where he stayed for a year. He then moved to Saudi Arabia, where he was financially supported by the Saudi Royal Family for the remainder of his life. Amin died in 2003.

56. With 57-Down, meal for which everyone pays his or her own way : DUTCH
Strictly speaking, when people “go Dutch” they each pay for themselves, as opposed to “splitting the tab”. That said, there is a suggestion that the term “go Dutch” originated with the Dutch door. Dutch doors had a top and a bottom equally divided in area.

60. Bruins legend Bobby : ORR
Bobby Orr is regarded as one of the greatest hockey players of all time. By the time he retired in 1978 he had undergone over a dozen knee surgeries. At 31 years of age, he concluded that he just couldn’t skate anymore. Reportedly, he was even having trouble walking …

63. A. A. Milne hopper : ROO
Like most of the characters in A. A. Milne’s “Winnie the Pooh”, Roo was inspired by on a stuffed toy belonging to Milne’s son Christopher Robin.

67. Heat or Thunder : NBA TEAM
The Miami Heat basketball team debuted in the NBA in the 1988-89 season. The franchise name was chosen in a competitive survey, with “Miami Heat” beating out “Miami Vice”.

70. Performance extras : ENCORES
“Encore” is the French word for “again”.

71. Something in brackets : TAX RATE
In a progressive tax system, brackets are divisions at which the rate of tax changes.

Down
1. Thriller set on Amity Island : JAWS
“Jaws” is a thrilling 1975 movie directed by Steven Spielberg that is based on a novel of the same name by Peter Benchley. The film has a powerful cast, led by Roy Scheider, Richard Dreyfuss and Robert Shaw. “Jaws” was perhaps the first “summer blockbuster” with the highest box office take in history, a record that stood until “Star Wars” was released two years later.

3. Joint action : TOKE
“Toke” is a slang term for a puff on a marijuana cigarette or on a pipe containing the drug.

5. Beats the rap : WALKS
A rap sheet is a criminal record. “Rap” is a slang term dating back to the 1700s that means “blame, responsibility” as in “to take the rap” and “to beat the rap”. This usage morphed into “rap sheet” in the early 1900s.

6. “Three Men in ___” (Jerome K. Jerome novel) : A BOAT
“Three Men in a Boat (To Say Nothing of the Dog)” is an 1889 novel by Jerome K. Jerome about boating holiday taken by the author on the River Thames in England. Jerome set out to pen a travel guide, but found that the humorous stories included in his account took over the work. The book is popular to this day, and fans even recreate the boat trip along the river. Highlights of the recreations are stops at the pubs mentioned along the way.

8. Roman magistrate : EDILE
In the days of the Roman Republic, aediles (also “ediles”) were magistrates who had responsibility for the management and upkeep of public facilities such as public buildings, streets and markets.

24. Ally of the Cheyenne: Var. : ARAPAHOE
The Arapaho tribe lived on the eastern plains of Colorado and Wyoming. The Arapaho traditionally wintered in small camps in the foothills of the Rockies, and then relocated to plains in the spring where they hunted the buffalo that were gathering to give birth to their young.

31. Justice Kagan : ELENA
Elena Kagan was the Solicitor General of the United States who replaced Justice John Paul Stevens on the US Supreme Court. That made Justice Kagan the fourth female US Supreme Court justice (there have been 108 men!). I hear she is a fan of Jane Austen, and used to reread “Pride and Prejudice” once a year. Not a bad thing to do, I’d say …

32. Handrail support : NEWEL
A newel is a principal upright post that supports a handrail beside a staircase. Newels are found at the top and bottom of the banister, and sometimes in between. Newels are often adorned with decorative trim to set them apart from the other posts by the staircase.

37. Michael of “Flashdance” : NOURI
Michael Nouri is a Lebanese-American actor whose most famous role was that of Nick Hurley (Alex’s boss) in the 1983 movie “Flashdance”.

47. North-of-the-border grid org. : CFL
The Canadian Football League was formed back in 1958, and has helped increase the popularity of football in the country. That said, ice hockey is still the main sports attraction north of the border.

58. Kinkajou cousin : COATI
A coati is a member of the raccoon family and is also known as the Brazilian aardvark, or the snookum bear. The coati is native to Central and South America, but can also be found in the southwest of the United States.

62. Simple quatrain pattern : ABAB
A quatrain is a group of four lines of poetry. The most common quatrain schemes are AAAA, AABB and ABAB.

66. Verdi aria “___ tu” : ERI
The aria “Eri tu” is from Verdi’s opera “Un ballo in maschera” (A Masked Ball). The opera tells the story of the assassination of King Gustav III of Sweden during a masked ball.

69. ___-80 (classic computer) : TRS
The TRS-80 was a model of computer sold by the Tandy Corporation through the company’s Radio Shack outlets. Back in 1977, the “big three” of personal computers were Apple, Commodore and Tandy. Well, at least Apple is still around …