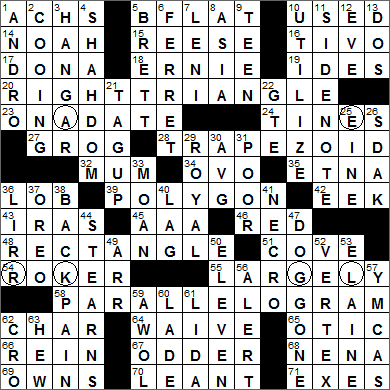 CROSSWORD SETTER: Daniel Landman
THEME: Polygons … the circled letters in the grid are VERTICES of POLYGONS, with each POLYGON being defined by a word made from those VERTICES:

14. 2013-’14 N.B.A. All-Star Joakim ___ : NOAH
Professional basketball player Joakim Noah is a citizen of the US, Sweden and France, as he was born in New York City to a French father and Swedish mother. Noah’s parents are celebrities in their own rights. Yannick Noah is a former world no. 3 tennis player, and Cécilia Rodhe was Miss Sweden in 1978.

17. Spanish lady : DONA
In Spain, a title of respect for men is “Don”. The equivalent female title is “Dona”.

18. Resident of 123 Sesame Street : ERNIE
Back in 1966, the Carnegie Institute allocated money to study the use of television to help young children prepare for school. The institute gave an $8million grant to set up the Children’s Television Workshop with the task of creating an educational TV program for young people. The program began to come together, especially after Jim Henson (of Muppet fame) got involved. The name “Sesame Street” was chosen simply because it was the “least disliked” of all names proposed just before the program went on the air.

20. ELK, geometrically, in the finished puzzle : RIGHT TRIANGLE
A right triangle is one that includes a right angle (i.e. 90 degrees).

27. Limey’s drink : GROG
Edward Vernon was a naval officer with the nickname “Old Grog”. In 1740, Vernon ordered that the daily ration of rum for his sailors should be watered down, in order to reduce discipline problems caused by drunkenness. The diluted rum was sweetened with sugar, and lemon or lime added to help preserve it on long voyages. This recipe, found to reduce scurvy among sailors (because of the citrus) spread throughout the Royal Navy, and “grog” was born.

“Limey” is a slang nickname for someone from Britain, and is a term used in particular by people from North America and Australia. “Limey” is thought to be short for “lime juicer”, an insulting phrase used to describe Royal Navy sailors who were given lime and lemon juice while at sea to help stave off scurvy.

28. EARL, geometrically : TRAPEZOID
A trapezoid is a four-sided shape in which at least one pair of sides are parallel.

32. Quiet : MUM
The phrase “mum’s the word” has been around since the early 1700s. “Mum” has been used to mean “silent” for centuries, the idea being that “mum” is the sound made when the lips are tightly sealed.

34. ___-lacto-vegetarian : OVO
A lacto-ovo vegetarian is someone who does not consume meat or fish, but does eat eggs (ovo) and dairy (lacto) products.

35. Europe’s highest volcano : ETNA
Mt. Etna is the largest of three active volcanoes in Italy. Mt Etna is about 2 1/2 times the height of its equally famous sister, Mt. Vesuvius.

39. ELK, EARL, LEAK or GEAR, geometrically : POLYGON
The suffix -gon comes from the Greek word “gonia” meaning “angle” or “knee”. So, a polygon has many “angles”. An octagon has eight angles or sides, for example.

46. Like Twizzlers : RED
Twizzlers candy has been produced since 1845, although back then the only flavor available was licorice. My wife is addicted to strawberry Twizzlers. Can’t stand the stuff myself …

54. “Wake Up With Al” co-host : ROKER
Al Roker is best known as the meteorologist on the “Today” show on NBC. He has successfully branched out from that platform though, and even co-wrote a novel called “The Morning Show Murders”, about a celebrity chef and TV host who get entangled in mystery. Topical stuff …

58. GEAR, geometrically : PARALLELOGRAM
A parallelogram is a quadrilateral in which the opposite sides are parallel.

68. “99 Luftballons” singer : NENA
Nena is a German singer (“Nena” became the name of her band as well) who had a big hit with one of my favorite songs of the eighties “99 Luftballons”. The English translation of the German title (“99 Red Balloons”) isn’t literal, with the color “red” added just so that the title had the right number of syllables for the tune. “Luftballon” is the name given to a child’s toy balloon in German.

71. Halves of an old item? : EXES
An unmarried couple known to be involved with each other might appear in the gossip columns. This appearance as “an item” in the papers, led to the use of “item” to refer to such a couple, but only since the very early seventies.

Down
1. Mixing male and female characteristics, slangily : ANDRO
“Andro-” is a prefix meaning male, as in androgen, a steroid hormone that controls the development of masculine characteristics.

3. Jet setting : HANGAR
“Hangar” is a French word for “shed”. The French first started using the term for a “shed for airplanes” in the very early 1900s.

4. Iran, formerly : SHAHDOM
The last Shah of Iran was Mohammed-Reza Shah Pahlavi, as he was overthrown in the revolution led by the Ayatollah Khomeini in 1979. The post-revolution government sought the extradition of the Shah back to Iran while he was in the United States seeking medical care (he had cancer). His prolonged stay in the United States, recovering from surgery, caused some unrest back in Iran and resentment towards the United States. Some say that this resentment precipitated the storming of the US Embassy in Tehran and the resulting hostage crisis.

7. Director Riefenstahl : LENI
Leni Riefenstahl was a German film director, actress and dancer. She was a noted figure moving in Adolf Hitler’s circle, and her most famous film was a propaganda piece called “Triumph of Will”. “Triumph of the Will” documents the 1934 Nazi Party Congress in Nuremberg. We’ve all probably seen many excerpts, shots of huge crowds, Nazis marching with flags, and frenzied speeches from Hitler. Riefenstahl was arrested after the war and detained for a number of years but never found guilty of any crime. She lived a long life, a very long life. She was married for the second time in 2003, at the age of 101 years. She died just a few weeks later, as she had been suffering from cancer.

9. First-time voter, often : TEEN
The minimum age of voters was called out in the US Constitution when it was passed in 1787. This was set at 21 years, but applied to only white male property owners. The minimum age of voters was lowered in the Twenty-sixth Amendment to the Constitution in 1971 as a response to student activism. Young people at that time were frustrated that they were mature enough to be drafted to fight in the Vietnam War, yet were not considered mature enough to vote in elections.

12. D-Day minus one : EVE
The most famous D-Day in history was June 6, 1944, the date of the Normandy landings in WWII. The term “D-Day” is used by the military to designate the day on which a combat operations are to be launched, especially when the actual date has yet to be determined. What D stands for seems to have been lost in the mists of time although the tradition is that D just stands for “Day”. In fact, the French have a similar term, “Jour J” (Day J), with a similar meaning. We also use H-Hour to denote the hour the attack is to commence.

22. Verizon forerunner : GTE
GTE was a rival to AT&T, the largest of the independent competitors to the Bell System. GTE merged with Bell Atlantic in 2000 to form the company that we know today as Verizon.

25. Article in Die Zeit : EINE
“Die Zeit” is the most widely read, weekly newspaper in Germany. It was first published soon after after in the end of WWII, in February of 1946. “Zeit” is the German word for “time”.

26. Neb. neighbor : SDAK
The Dakotas were admitted into the union in 1889, along with Montana and Washington. There was a famous rivalry between North and South Dakota, and some jockeying to determine which of the two’s admission papers should be signed first. President Harrison solved the problem by directing that the papers of all four states should be shuffled, and he signed them without recording the order.

29. 5-Down, for his entire career : ROYAL
The Kansas City Royals Major League Baseball team was founded in 1969. The team takes its name from the American Royal, a livestock show and rodeo held annually in Kansas City since 1899.

38. Lumbago : BACK PAIN
Lumbago is pain in the lower back. The name “lumbago” is a Late Latin term describing a “weakness of the loins and lower back”. The term comes from the Latin “lumbus” meaning “loin”.

44. Bear’s Wall Street partner : STEARNS
New York investment bank Bear Stearnswas one of the institutions that collapsed in the financial meltdown of 2008, and was then sold off to JPMorgan Chase.

57. Some fitness centers : YMCAS
The YMCA is a worldwide movement that has its roots in London, England. There, in 1844, the Young Men’s Christian Association (YMCA) was founded with the intent of promoting Christian principles through the development of “a healthy spirit, mind and body”. The founder, George Williams, saw the need to create YMCA facilities for young men who were flocking to the cities as the Industrial Revolution flourished. He saw that these men were frequenting taverns and brothels, and wanted to offer a more wholesome alternative.

59. Unaccounted for : AWOL
The Military Police (MPs) are concerned with personnel who go AWOL (Absent Without Leave).

60. Put on board : LADE
The verb “lade” meaning “to load” comes from an Old English word “hladan”. Lade also used to mean “to draw water” and indeed gave us our word “ladle”. So “lade” and “ladle” are close cousins.

62. ___-Magnon : CRO
Remains of early man, dating back to 35,000 years ago, were found in Abri de Cro-Magnon in southwest France, giving the name to those early humans. Cro-Magnon remains are the oldest human relics that have been discovered in Europe.