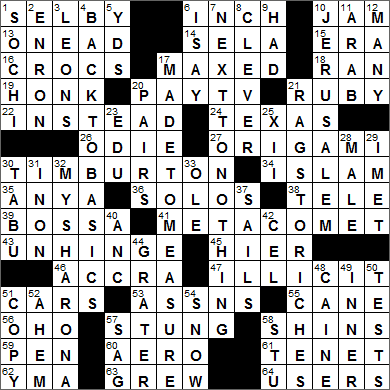 CROSSWORD SETTER: Todd Gross
THEME: Encyclopedia Volumes … each of today’s themed answers is a common phrase that looks like the title of an encyclopedia volume. The phrase is in the format X to Y, with X being alphabetically close to Y:

Today’s Wiki-est, Amazonian Googlies
Across
1. Actor David of “Dark Shadows” : SELBY
David Selby is an actor best known for playing Quentin Collins on the TV show “Dark Shadows” from 1968 to 1971, and Richard Channing on the soap opera “Falcon Crest” from 1982 to 1990.

13. Millennium starter : ONE AD
The designations Anno Domini (AD, “year of Our Lord”) and Before Christ (BC) are found in the Julian and Gregorian calendars. The dividing point between AD and BC is the year of the conception of Jesus, with AD 1 following 1 BC without a year “0” in between. The AD/BC scheme dates back to AD 525, and gained wide acceptance soon after AD 800. Nowadays a modified version has become popular, with CE (Common/Christian Era) used to replace AD, and BCE (Before the Common/Christian Era) used to replace BC.

14. Ward of “CSI: NY” : SELA
The actress Sela Ward turns up in crosswords a lot. Ward played Teddy Reed in the TV show “Sisters” in the nineties, and was in “Once and Again” from 1999-2002. I don’t know either show, but I do know Ward from the medical drama “House” in which she played the hospital’s lawyer and Greg House’s ex-partner. That was a fun role, I thought. More recently Ward played a lead role on “CSI: NY” and was a very welcome and much-needed addition to the cast …

16. Brand of colorful footwear : CROCS
Crocs are foam clogs that were originally designed as shoes to be worn at health spas.

24. Republic founded in 1836 : TEXAS
The first European flag to fly over the area that we now call Texas was the flag of Spain. The French had a colony there as well, albeit for a short length of time. Mexico controlled the territory for a long time, until Texas became independent in 1836. Texas joined the Union in 1845 (as the 28th state). During the Civil War Texas sided with the Confederate States of America, and then after the war, the Stars and Stripes flew again. That does make “Six Flags over Texas”.

26. Comics character who once solved a sudoku : ODIE
Odie is Garfield’s best friend and is a slobbery beagle, a character in Jim Davis’s comic strip named “Garfield”.

27. Paperwork? : ORIGAMI
Origami is the traditional Japanese art form of paper folding. The best-known example of the craft is the paper crane. The word “origami” is derived from “ori“ (folding) and “kami” (paper).

30. “Alice in Wonderland” director, 2010 : TIM BURTON
Movie director and producer Tim Burton makes my least favorite types of movie: dark, gothic, horror fantasies. The list of his titles includes “Edward Scissorhands”, “Sleepy Hollow”, “Sweeney Todd”, “Charlie and the Chocolate Factory” and “Alice in Wonderland”. Also included in each of these movies is Johnny Depp in a starring role, as Depp and Burton are good friends and frequent collaborators. Another frequent star in Burton movies is English actress Helena Bonham Carter, who has been his domestic partner since 2001.

34. Yusuf ___ a.k.a. Cat Stevens : ISLAM
The singer-songwriter that I mainly know as Cat Stevens has been through a few names in his life. He was born in London as Steven Georgiou and adopted the stage name “Steve Adams” in the mid-sixties. A year later he changed his stage name to “Cat Stevens”, with which he had most of success. During this time he had hits with classic songs like “Wild World”, “Moonshadow” and “Morning Has Broken”. He also wrote the song “The First Cut Is the Deepest”, which became a hit for four different artists. In 1977, Stevens converted to Islam and took the name Yusuf Islam in 1978.

39. ___ nova : BOSSA
Bossa Nova is a style of music from Brazil that evolved from samba. The most famous piece of bossa nova is the song “The Girl from Ipanema”.

41. Indian chief called King Philip : METACOMET
Metacomet was became the chief of the Wampanoag people in 1662, just over forty years after the Pilgrims founded the Plymouth Colony. The Wampanoag maintained an uneasy peace with the Puritans, and Metacomet adopted the English name Philip. As the puritan colonies expanded, the peace finally broke down and the conflict known as King Philip’s War began. The war lasted from 1675 until 1678.

46. West African capital : ACCRA
Accra sits on Ghana’s coast and is a major seaport as well as the country’s capital city. The name “Accra” comes from a local word “Nkran” meaning “ants”, a name chosen because of the large number of anthills found in the area when the city was founded.

58. Hebrew letters on dreidels : SHINS
A dreidel is a spinning top with four sides, often associated with the Jewish holiday of Hanukkah. Each of the four sides on a dreidel bears a letter from the Hebrew alphabet (nun, gimel, hei and shin). The four letters are the initials of the Hebrew phrase “Nes Gadol Hayah Sham” meaning “a great miracle happened there”. According to tradition, children would be taught Torah while hiding in caves away from the Greeks. When Greek soldiers approached, the children would hide their torah scrolls and play with their dreidels instead.

60. Nestlé chocolate bar since 1988 : AERO
I must admit to having a weakness for Aero chocolate bars. Aero was introduced by Rowntree’s in the North of England in 1935. The “aero” name is a reference to the chocolate’s “bubbly” texture.

61. Chief belief : TENET
A tenet is an article of faith, something that is held to be true. “Tenet” is Latin for “he holds”.

Down
1. Winter Olympics host after Vancouver : SOCHI
Sochi is a city in the west of Russian on the Black Sea coast. It is the largest resort city in the whole country. Sochi is going to be pretty busy in the next few years. It will host the 2014 Winter Olympic Games, the Russian Formula 1 Grand Prix from 2014 as well as the 2018 World Cup in soccer.

5. Drapers’ units: Abbr. : YDS
A draper is a cloth merchant. I think that the term “draper” is much more common on the other side of the pond.

10. It would be “a crown of glory in the hand of the Lord,” to Isaiah : JERUSALEM
Jerusalem is one of the oldest cities in the world, with the oldest part of Jerusalem having been settles in the 4th millennium BCE. The city is considered holy in all three of the big Abrahamic traditions of Judaism, Christianity and Islam and as a result is one of the crucial issues to be resolved in the Israeli-Palestinian conflict.

25. The last Pope Pius : XII
There have been twelve popes named Pius, the latest being Pope Pius XII who led the Roman Catholic Church until his death in 1958.

30. Fragrance from Dana Perfumes : TABU
Tabu is a whole line of cosmetics and perfumes produced by the House of Dana. The company’s brand names were purchased by a Florida company called Dana Classic Fragrances in 1999.

32. 1979 #1 hit whose title is sung with a stutter : MY SHARONA
“My Sharona” is a hit single from 1979 released by a band called the Knack. The band’s guitarist wrote the song after meeting a 17-year-old girl called Sharona, who later became his girlfriend. Young Sharona appears on the cover sleeve for the record. Three decades later, Sharona’s a real estate agent in LA.

37. Sheets on a ship : SAILS
The term “sheet” can be used for a sail on a ship. A rope used to trim a sail is also called a sheet.

40. Mandela’s political party, for short : ANC
As a young man, Nelson Mandela led the armed wing of the African National Congress (ANC). Mandela was eventually arrested and admitted to charges of sabotage and was sentenced to life in prison in 1964. He remained behind bars for 27 years, mainly in the infamous prison on Robben Island. As the years progressed, Mandela became a symbol of the fight against apartheid. He was released in 1990, and immediately declared his commitment to peace and reconciliation with South Africa’s white minority population. Mandela was elected president of the Republic of South Africa (RSA) in 1994, an office that he held until 1999. Nelson Mandela passed away on December 5, 2013.

42. Bugs might be seen in one : CEL
In the world of animation, a cel is a transparent sheet on which objects and characters are drawn. In the first half of the 20th century the sheet was actually made of celluloid, giving the “cel” its name.

48. Title ship in a W.W. II film : CAINE
Herman Wouk won a Pulitzer in 1951 for his novel “The Caine Mutiny”. The story involves mutiny and court-martial aboard a US Navy vessel and reflected, at least partly, the personal experiences of Wouk as he served in the Pacific in WWII aboard a destroyer-minesweeper. The novel was adapted into a marvelous film released in 1954 starring Humphrey Bogart as Philip Queeg, the harsh captain of the USS Caine.

58. Country singer Phillips : STU
Stu Phillips is a country singer from Calgary, Alberta who made a career for himself in Nashville.