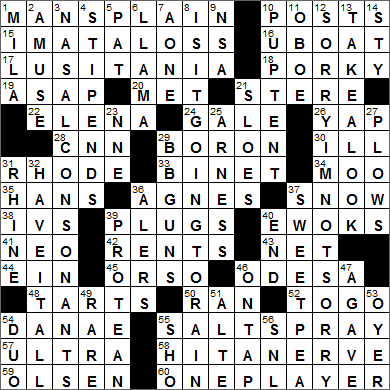 Today’s Wiki-est, Amazonian Googlies
Across
1. Patronizingly point out, in modern lingo : MANSPLAIN
If a man explains something in a condescending manner to a woman, he is said to be “mansplaining”, a portmanteau of “man” and “explaining”.

16. Source of doom for the 17-Across : U-BOAT
17. See 16-Across : LUSITANIA
U-boat stands for the German “Unterseeboot” (undersea boat). Notably, a U-boat sank the RMS Lusitania in 1915, an event that helped propel the US into WWI.

18. Famous stutterer : PORKY
Porky Pig was the first of the characters created by Warner Bros. to become a hit with audiences. Porky Pig is the guy with the line at the end of each cartoon, “Th-th-th-that’s all folks!” If you don’t mind a little adult language, there’s a very funny 11-second Porky Pig clip that the studio released on a blooper reel in 1938. Porky Pig stutters out “Son of g-g-gun”, only he doesn’t say “gun” …

21. Firewood unit : STERE
“Stere” is a metric measure, although it is not part of the modern metric system. Nowadays the stere is used as a measure for firewood, and is equal to one cubic meter.

22. First name on the Supreme Court : ELENA
Elena Kagan was the Solicitor General of the United States who replaced Justice John Paul Stevens on the US Supreme Court. That made Justice Kagan the fourth female US Supreme Court justice (there have been 108 men!). I hear she is a fan of Jane Austen, and used to reread “Pride and Prejudice” once a year. Not a bad thing to do, I’d say …

29. Element in Pyrex : BORON
Pyrex glassware is brand name owned by Corning. As well as being used in bakeware and laboratory glassware, Pyrex is often the material of choice for optics in large telescopes used in astronomy. Pyrex is made from borosilicate glass, the main ingredients of which at silica and boron trioxide.

31. ___ Island : RHODE
Rhode Island is the smallest state in the union, but is the second most densely populated. (after New Jersey). Rhode Island is known as the Ocean State, largely because about 14% of the state’s area is made up of ocean bays and inlets. Exactly how Rhode Island got its name is a little unclear. What is known is that way back in 1524, long before the Pilgrims came to New England, the Italian explorer Giovanni da Verrazzano likened an island in the area to the Island of Rhodes in the Mediterranean. There were subsequent references to “Rhode Island” in English publications, before the colonists arrived.

35. Prince in “Frozen” : HANS
“Frozen” is a 2013 animated feature from Walt Disney Studios that is based on the Hans Christian Andersen fairy tale “The Snow Queen”. “Frozen” is now the highest-grossing animated film of all time. I suppose I should watch it one day …

36. Patron saint of chastity : AGNES
Agnes of Rome was a member of the Roman nobility who was executed in the year 304 CE as a follower of Christianity, when she was just twelve of thirteen years old. She is now venerated as the patron saint of young girls. John Keats wrote a poem called “The Eve of Saint Agnes” which refers to the superstition that young women should practice certain rituals on Saint Agnes’s Eve in order to identify their future husbands.

40. Space race? : EWOKS
The Ewoks are creatures who live on the moon of Endor, first appearing in “Star Wars Episode VI: Return of the Jedi”. They’re the cute and cuddly little guys that look like teddy bears.

42. Monopoly card data : RENTS
The commercial game of Monopoly is supposedly a remake of “The Landlord’s Game” created in 1903 by a Quaker woman called Lizzie Phillips. Phillips used her game as a tool to explain the single tax theory of American economist Henry George. The Landlord’s Game was first produced commercially in 1924. The incredibly successful derivative game called Monopoly was introduced in 1933 by Charles Darrow, who became a very rich man when Parker Brothers bought the rights to the game just two years later in 1935.

44. Brahms’s “___ Deutsches Requiem” : EIN
Brahms’ “Ein Deutsches Requiem” (A German Requiem) is a huge work. It is performed by an ensemble of full orchestra with chorus and soloists, and has seven movements that last up to 80 minutes.

46. City south of Kyiv : ODESA
The city of Odessa (also “Odesa”) in Ukraine was founded relatively recently, in 1794 by Catherine the Great. The city was originally meant to be called Odessos after an ancient Greek city believed to have been located nearby. Catherine liked the way the locals pronounced the name as “Odessa” and so went with the less Greek-sounding name.

59. Elizabeth of “Avengers: Age of Ultron” : OLSEN
Elizabeth Olsen is an actress and singer, and the younger sister of the famed Olsen twins Mary-Kate and Ashley.

Down
1. Kunis of “Black Swan” : MILA
Mila Kunis is a Ukrainian-born, American actress, who plays Jackie Burkhart on “That ’70s Show”. Fans of the cartoon series “Family Guy” might recognize her voicing the Meg Griffin character. In ”Black Swan”, Kunis plays a rival ballet dancer to the character played by Natalie Portman. In her personal life, Kunis dated Macaulay Culkin for 8 years.

5. First lady before Betty : PAT
Pat Nixon was the First Lady of the US from 1969 to 1974. Nixon was born in Ely, Nevada and named Thelma Catherine Ryan. The future First Lady’s Irish father gave her the nickname “Pat” because she was born on March 16th, the day before St. Patrick’s Day.

6. Spitting image in the Andes? : LLAMA
Many female mammals lick off their newborn. That’s not an option for llamas as their tongues only reach out of their mouths about half an inch. Instead llama dams nuzzle their young and hum to them.

8. “Should I take an umbrella or not?” : IS IT GOING TO RAIN?
Our term “umbrella” ultimately derives from the Latin “umbra” meaning “shade, shadow”.

9. Metadata collector, for short : NSA
The National Security Agency (NSA) was set up in 1952 by President Truman, a replacement for the Armed Forces Security Agency that had existed in the Department of Defense since 1949. The NSA has always been clouded in secrecy and even the 1952 letter from President Truman that established the agency was kept under wraps from the public for over a generation. I really like the organization’s nickname … “No Such Agency”.

10. Scout’s shelter : PUP TENT
A pup tent is a small ridge tent, meant for use by 2-3 people. The term “pup tent” has been around since the mid-1800s. A pup tent was sometimes called a dog tent.

21. Cherry plum relatives : SLOES
The sloe is the fruit of the blackthorn bush, and the main flavoring ingredient in sloe gin.

23. Minneapolis-to-Duluth dir. : NNE
Duluth, Minnesota lies at the westernmost end of Lake Superior, and as such is the westernmost port of the Great Lakes. One has to travel 2,300 miles of inland waterway to get to the Atlantic Ocean from Duluth. The city of Duluth takes its name from the first European explorer of the region, the Frenchman Daniel Greysolon, Sieur du Lhut.

25. James of “Gunsmoke” : ARNESS
James Arness played the role of Matt Dillon, Marshal of Dodge City, on “Gunsmoke” for twenty years. If you count the occasions when he reprised the role for specials, he actually performed as Matt Dillon over five decades. And, did you know that Peter Graves, the actor who played Jim Phelps on “Mission: Impossible”, his real name was Peter Arness? He and James were brothers.

29. Pistols with spring-air action : BB GUNS
A BB gun is an air pistol or rifle that shoots birdshot known as BBs. Birdshot comes in a number of different sizes, from size 9 (0.080″ in diameter) to size FF (.23″). 0.180″ diameter birdshot is size BB, which gives the airgun its name.

31. Locale of some Swiss banks : RHINE
The river running through Europe that we know in English as the Rhine, is called “Rhein” in German, “Rhin” in French and “Rijn” in Dutch.

36. A’s and O’s : ALERS
The Oakland Athletics (usually “the A’s”) baseball franchise was founded back in 1901 as the Philadelphia Athletics. The team became the Kansas City Athletics in 1955 and moved to Oakland in 1968.

39. Frequently changing : PROTEAN
In Greek mythology, the sea-god Proteus had the ability to take on new shapes to hide himself. This led to our word “protean”, meaning someone or something that is ever-changing and versatile.

47. Sweetener source : AGAVE
Agave nectar (also “agave syrup”) is sweeter than honey, but is much more fluid. The nectar’s sweetness comes from its high fructose content. A lot of agave nectar comes from the blue agave, the same species that is used to make tequila.

49. Like years evenly divisible by four that are not leap years : RARE
I wasn’t sure of the origin of the term “leap year”, and when I checked I found it to be fairly obvious. As a reference, let’s use March 25, 2007, a Sunday. The year before, in 2006, March 25th fell one weekday earlier on a Saturday, following the rule that each year any particular date moves forward in the week by one day. However, the next year (208) has an extra day, February 29th. So March 25, 2008 falls on a Tuesday, “leaping” two weekdays forward, not one, as 2008 is a “leap” year. I think I am more confused now then when I started this paragraph …

53. ___ and terminer (high criminal court) : OYER
“Oyer and terminer” is a term that originates in English law and that applies in some US states. Here in the US, oyer and terminer is the name given to some courts of criminal jurisdiction. Even though it has its origins in English law, the words “oyer” and “terminer” come from French (via Anglo-Norman) and mean “to hear” and “to determine”.

54. The White Stripes, e.g. : DUO
The White Stripes were a rock duo from Detroit that were together from 1997 to 2011. The duo was made up of Meg and Jack White, who were married from 1996 to 2000. Prior to the couple tying the knot, Jack’s family name was Gillis. Gillis took the unusual step of taking his wife’s family name when they married.

56. Former gig for Sen. Franken : SNL
Al Franken is the junior US Senator from Minnesota. Franken won the seat in 2009 after an extremely close race, a race that he eventually won by just 312 votes. Prior to serving in the Senate, Franken was a noted satirist and a writer for “Saturday Night Live”.