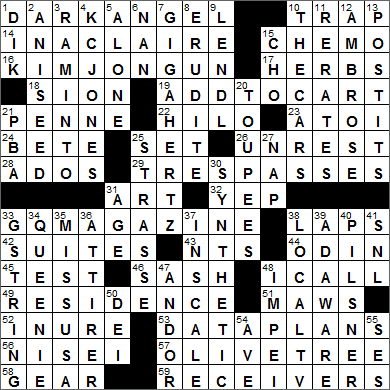 Today’s Wiki-est, Amazonian Googlies
Across
1. 2000s James Cameron cyberpunk/sci-fi series : DARK ANGEL
“Dark Angel” is a sci-fi series that ran from 2000 to 2002, and gave the star Jessica Alba her big break as an actress. Alba plays genetically-enhanced super-soldier in post-apocalyptic Seattle. The show is a creation of celebrated producer and director James Cameron.

15. Difficult treatment, informally : CHEMO
Chemotherapy is a form of cancer treatment. In the treatment, chemicals are introduced into the body that kill cells that divide rapidly, with the rapidly-dividing cancer cells being the target. Cells in the bone marrow, the digestive tract and hair follicles also divide rapidly, and so side effects usually ensue. Side effects include reduced blood cell count, nausea and hair loss.

16. Interviewee in 2014’s “The Interview” : KIM JONG-UN
Kim Jong-un is the current supreme leader of North Korea, a man very much in the news since he came to power on the death of his father Kim Jong-il in 2011. Kim Jong-un went to school for several years in Switzerland, living under an assumed name. While at school, he was known to be very athletic, and was particularly fond of playing and watching basketball.

“The Interview” is a 2014 comedy film co-directed by and co-starring Seth Rogen. In the movie, Rogen and fellow star James Franco play journalists who are instructed by the CIA to assassinate North Korean leader Kim Jong-un during a scheduled interview. The film created a huge controversy when the government of North Korea threatened retaliation should the film be released. Sony arranged for a limited release in cinemas, but made it readily available for online rental and purchase. “The Interview” has made more money for Sony than any other digital release.

17. Catnip and others : HERBS
About 50% of all cats are affected in some way by the plant catnip. There is a terpenoid in the oil of the plant called nepetalactone that the cat inhales and that can cause anything from drowsiness to anxiety.

18. “The Da Vinci Code” priory : SION
The Priory of Sion is presented in the preface of Dan Brown’s novel “The Da Vinci Code” as a secret society that did in fact exist. However, there is a lot of evidence that the priory was an invention, created in forged documents in the sixties. Regardless, Dan Brown’s book is a really enjoyable read, in my humble opinion …

21. Trattoria order : PENNE
Cylindrical pasta is known in general as “penne”, and there are many variants. For example, ziti is a particularly large and long tube with square-cut ends. “Penne” is the plural of “penna”, the Italian for “feather, quill”.

22. Variety of poker, briefly : HI/LO
In the card game Seven Card Stud Hi/Lo, the pot is usually split by the highest and the lowest hands.

23. French possessive : A TOI
“À toi” is the French term for “yours”, when talking to someone with whom one is familiar. “À toi” literally means “to you”.

24. Émile Zola’s “La ___ humaine” : BETE
“La bête humaine” (The Human Beast) is an 1870 novel by French author Émile Zola. It is a tale of murder set on the railway system between Paris and Le Havre.

33. “Look Sharp. Live Smart” sloganeer : GQ MAGAZINE
The Men’s magazine known today as “GQ” used to be titled “Gentlemen’s Quarterly”, and before that was called “Apparel Arts” when it was launched in 1931.

38. 200 at a 500 : LAPS
The first Indy 500 race was held on Memorial Day in 1911. The winner that day was one Ray Harroun. Harroun had seen someone using a rear view mirror on a horse-drawn vehicle, and decided to fit one on his Marmon “Wasp” motor car. Supposedly that was the first ever use of a rear-view mirror on a motor vehicle.

43. Some Windows systems : NTS
Windows XP, Windows Vista and Windows 7, 8 and 10; they’re all based on the Windows NT operating system. There is a common perception that Windows NT (WNT) takes its name from VMS, an earlier operating system developed by Digital Equipment Corporation. “WNT” is what’s called a “Caesar cypher” of “VMS”, as you just augment the letters of VMS alphabetically by one to arrive at WNT. Bill Gates disputes this derivation of the name, and in a 1998 interview stated that the NT originally stood for N-Ten and that the marketing folks at Microsoft revised history by changing it to “New Technology”.

44. Two-time mythological role for Anthony Hopkins : ODIN
Thor is a superhero who was introduced to us by Marvel Comics in 1962. The character is of course based on the Norse god Thor, and comes complete with a magical hammer. Like so many comic book heroes it seems, Thor has made it to the big screen. Actor Chris Hemsworth played the role in the 2011 film “Thor” directed by the great Kenneth Branagh. Branagh must have needed the cash. Thor’s father Odin is played by Anthony Hopkins. He must have needed the cash too …

57. Athena’s gift to Athens : OLIVE TREE
According to myth, the goddess Athena competed with Poseidon for the privilege of being the patron of the city we now call Athens. Poseidon gave the city a salt water spring, and Athena offered an olive tree. As the olive tree was a source of wood, oil and food, Athena won the competition, and the city was named “Athens” in her honor.

Down
1. Hägar creator Browne : DIK
“Hagar the Horrible” is a comic strip that was created by the late Dik Browne and is now drawn by his son, Chris Browne. “Hagar the Terrible” (not “Horrible”) was the nickname given to Dik by his sons.

2. Ouzo flavorer : ANISEED
Ouzo is an aperitif from Greece that is colorless and flavored with anise. Ouzo is similar to pastis from France and also has a flavor like sambuca from Italy.

4. Hall-of-Famer from the 1950s-’60s Celtics : KC JONES
K. C. Jones is a retired professional basketball player who played and coached with the Boston Celtics. Jones won the NBA Championship 11 times with the Celtics, eight times as a player and three times in a coaching position.

5. Forever ___ (Internet meme) : ALONE
A “meme” (short for “mineme”) is a cultural practice or idea that is passed on verbally or by repetition from one person to another. The term lends itself very well to the online world where links, emails, files etc. are so easily propagated.

6. Photographer Goldin : NAN
Nan Goldin is an American photographer who is based in New York, Berlin and Paris.

8. Learned : ERUDITE
“Erudite” is a lovely-sounding word meaning “learned, well-educated”. The term comes from the Latin verb “erudire” meaning “to educate”, or more literally “to bring out of the rough”.

9. Three-time U.S. Open champ in the 1980s : LENDL
Ivan Lendl is a former professional tennis player from Czechoslovakia. Lendl appeared in eight consecutive US Open finals in the eighties, a record that stands to this day.

10. “Let’s Go” group, 1979 : THE CARS
The Cars are a rock band from Boston, Massachusetts who were at the height of their success in the late seventies and early eighties.

11. Changes at Standard & Poor’s, say : RERATES
Standard & Poor’s (S&P) is a financial services company, famous for its stock market indices, especially the S&P 500. The company also publishes credit ratings for sovereign governments, and in 2011 famously lowered the rating of the US federal government from AAA to to AA+.

13. Some office notes : POST-ITS
The Post-it note was invented at 3M following the accidental discovery of a low-tack, reusable adhesive. The actual intent of the development program was the discovery of a super-strong adhesive.

15. ___ Chang, Harry Potter’s onetime crush : CHO
Cho Chang is a fellow student of Harry Potter, one year ahead of him at Hogwarts. Chang is the girl who gives Harry his first kiss!

In ten-pin bowling, a perfect game is a score of 300, which means that 12 strikes are bowled in a row.

25. Bonn boulevard : STRASSE
After WWII, Bonn was chosen as the capital of West Germany, a choice promoted by Chancellor Konrad Adenauer who was from the area. After German reunification, the capital was moved to Berlin.

33. Burlesque show wear : G-STRING
The origins of “G-string”, the type of revealing underwear, is unclear. However, the term “geestring” has been used since the 1800s and originally referred to the string that held the loincloths worn by Native Americans.

34. She’s “too cute to be a minute over 17” in a Chuck Berry song : QUEENIE
“Little Queenie” is a Chuck Berry song that wrote and recorded in 1959. Berry used the same melody for his Christmas song “Run Rudolph Run” that was released the prior year.

35. 46-Across wearer since 1952 : MISS USA
The Miss USA beauty pageant was founded in 1952 in order to select the American candidate for the Miss Universe competition.

39. Computer program that blocks viruses : AD-AWARE
Ad-Aware is a spyware removal application that was originally developed in Germany in 1999.

40. Stella Artois or Beck’s : PILSNER
Pilsener (also pilsner or pils) is a pale lager. The name “pilsener” comes from the city of Pilsen, now in the Czech Republic. It was in Pilsen, in 1842, that the first bottom-fermented lager was produced. A bottom-fermented beer is much clearer that a top-fermented beer, and has a crisper taste. The “top” and “bottom” refers to where the yeast gathers during the brewing process.

Beck’s beer comes from Bremen in northern Germany. It is the fifth most successful brewery in the country, based on sales. The image you’ll see on the bottle, a key within a shield, is the mirror image of Bremen’s coat of arms.

An “alumnus” (plural … alumni) is a graduate or former student of a school or college. The female form is “alumna” (plural … alumnae). The term comes into English from Latin, in which alumnus means foster-son or pupil. “Alum” is an informal term used for either an alumna or an alumnus.

48. Noted Guangzhou-born architect : IM PEI
I. M. Pei (full name: Ieoh Ming Pei) is an exceptional American architect who was born in the Jiangsu province in eastern China. Of Pei’s many wonderful works, my favorite is the renovation of the Louvre in Paris, especially the Glass Pyramid in the courtyard.

50. ___ gratia : DEI
“Dei Gratia” is Latin for “By the Grace of God”. The term is used in the name of a monarch who is said to be ruling by divine right. For example, the full title of the UK’s Queen is “Elizabeth II, by the Grace of God, of the United Kingdom of Great Britain and Northern Ireland and of Her other Realms and Territories Queen, Head of the Commonwealth, Defender of the Faith”.