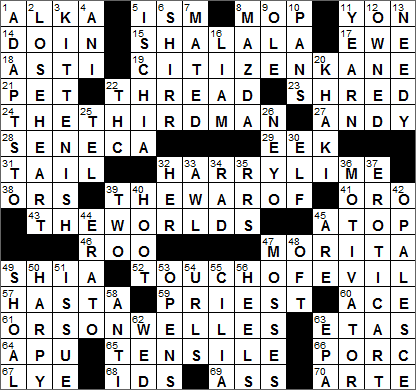 Today’s Wiki-est, Amazonian Googlies
Across
1. ___-Seltzer : ALKA
Alka-Seltzer is a brand of fizzy antacid that has been marketed since 1931. In terms of ingredients, it is a mix of sodium bicarbonate, aspirin and anhydrous citric acid.

15. Donna of Clinton’s cabinet : SHALALA
Donna Shalala was a Secretary of Health and Human Services in the Clinton Administration. Shalala was the first Arab-American to serve in a cabinet position.

18. Piedmont wine : ASTI
Asti is in the Piedmont region of northwest Italy. The region is perhaps most famous for its Asti Spumante sparkling white wine.

19. Directorial triumph for 61-Across : CITIZEN KANE
“Citizen Kane” was the first film made by Orson Welles, one considered by many to be the finest film ever made. It’s a remarkable achievement by Wells, as he played the lead, and also produced and directed. Despite all the accolades for “Citizen Kane” over the decades, the movie was far from a commercial success in its early run and actually lost money at the box office.

24. Film featuring 61-Across : THE THIRD MAN
“The Third Man” is a great film noir produced in England in 1949, and starring Joseph Cotten, Orson Welles and Trevor Howard. It’s a great film in itself, but is often remembered for the title music, an instrumental piece featuring the zither that was written and performed by Anton Karas. The screenplay for the film was written by Graham Greene.

27. Crooner Williams : ANDY
The singer Andy Williams was born in Wall Lake, Iowa. He was at the height of his popularity in the sixties as host of “The Andy Williams Show”. It was also in the sixties when Williams adopted his famous theme song “Moon River”, which was written for 1961 movie “Breakfast at Tiffany’s” by Henry Mancini and Johnny Mercer. Off the stage, he was a noted collector of Navajo blankets and owned a collection worth over a million dollars.

28. Roman Stoic philosopher : SENECA
Seneca the Younger was a playwright as well as a tutor and advisor to the Emperor Nero of Ancient Rome. Although maybe innocent, Seneca was forced to commit suicide by Nero as it was alleged that Seneca participated in a plot to kill the emperor. To kill himself, Seneca cut into a number of veins in order to bleed to death.

31. Prehensile ___ : TAIL
A part of the body that is described as prehensile is adapted for grasping. Examples would be an elephant’s trunk and a monkey’s tail.

39. With 43-Across, panic-inducing production of 61-Across : THE WAR OF
(43A. See 39-Across : THE WORLDS)
Orson Welles starred in and directed 1938’s famous radio play “The War of the Worlds”. This adaptation of the H. G. Wells science-fiction novel included several apparent news broadcasts that reported the effects of an alien invasion. Many people who heard the broadcasts didn’t realise that they were part of a play. It is estimated that of 6 million people who tuned it, 1.2 million listeners were genuinely frightened by what they were hearing.

46. Friend of Eeyore : ROO
In A. A. Milne’s “Winnie-the-Pooh” collection of stories, Pooh has many friend in Hundred Acre Wood. Besides Christopher Robin, who doesn’t actually live in the wood, the list includes Piglet, Eeyore, Kanga, Roo, Rabbit, Tigger and Owl.

47. Akio who co-founded Sony : MORITA
Sony was founded by Akio Morita and Masaru Ibuka. The two partners met in the Japanese Navy during WWII.

52. 1958 film by 61-Across : TOUCH OF EVIL
“Touch of Evil” is a 1958 film noir that is very much Orson Welles project. Wells wrote the screenplay, directed the film and co-starred. Other stars are Charlton Heston and Janet Leigh, with Marlene Dietrich supporting. Apparently Welles got the directing job at the behest of Heston (laugh, everyone!) …

60. Result of rapid service? : ACE
An ace is an unreturnable tennis serve.

61. Noted director/actor born in May 1915 : ORSON WELLES
George Orson Welles (known as “Orson”) is perhaps best-remembered in the world of film for his role in 1941’s “Citizen Kane”. In the world of radio, Welles is known for 1938’s famous broadcast of “The War of the Worlds”, a broadcast that convinced many listeners that the Earth was indeed being invaded by aliens.

63. Greek vowels : ETAS
Eta is the seventh letter of the Greek alphabet, and is a forerunner of our Latin character “H”. Originally denoting a consonant, eta was used as a long vowel in Ancient Greek.

64. Kwik-E-Mart clerk : APU
The fictional Kwik-E-Mart store is operated by Apu Nahasapeemapetilon on “The Simpsons” TV show. Apu is married to Manjula , and the couple have eight children, actually eight octuplets. The convenience store owner doesn’t seem to be making much use of his Ph.D in computer science that he earned in the US. Apu’s undergraduate degree is from Caltech (the Calcutta Technical Institute), where he graduated top of his class of seven million students …

66. Alternative to boeuf or jambon : PORC
In French, meat served for dinner might be beef (boeuf), ham (jambon) or pork (porc).

67. Caustic substance : LYE
What we call “lye” is usually sodium hydroxide, although historically the term was used for potassium hydroxide. Lye has many uses, including to cure several foodstuffs. Lye can make olives less bitter, for example. The chemical is also found in canned mandarin oranges, pretzels and Japanese ramen noodles. More concentrated grades of lye are used to clear drains and clean ovens. Scary …

68. Things checked by the T.S.A. : IDS
The Transportation Security Administration (TSA) was created in 2001, soon after the 9/11 attacks. TSA personnel carry out the baggage and body searches at US airports.

69. Nincompoop : ASS
The word “nincompoop”, meaning a fool, seems to have been around for quite a while. It has been used since the 1670s, but no one appears to know its origins.

70. Johnson of comedy : ARTE
Arte Johnson, as well being a frequent judge on “The Gong Show”, played the German soldier on “Rowan & Martin’s Laugh-In”. Johnson’s character’s famous catchphrase was, “Very interesting, but …”

Down
4. Singer DiFranco : ANI
Ani DiFranco is a folk-rock singer and songwriter. DiFranco has also been labeled a “feminist icon”, and in 2006 won the “Woman of Courage Award” from National Organization of Women.

6. Bake, as a shelled egg : SHIRR
Shirred eggs are eggs that have been baked without their shells in a flat-bottomed dish. The term “shirred” comes from the name of the dish that was traditionally used for the baking.

7. Out of moves, in chess : MATED
In the game of chess, when the king is under immediate threat of capture it is said to be “in check”. If the king cannot escape from check, then the game ends in “checkmate” and the player in check loses. In the original Sanskrit game of chess, the king could actually be captured. Then a rule was introduced requiring that a warning be given if capture was imminent (today we announce “check!”) so that an accidental and early ending to the game doesn’t occur.

8. “Zoom-zoom” sloganeer : MAZDA
“Zoom-zoom” is a catchphrase use by the automaker Mazda. Mazda is based in the Hiroshima Prefecture in Japan. The ballpark where the Hiroshima baseball team play was for many years known as the MAZDA Zoom-Zoom Stadium.

9. Corrida cry : OLE!
We translate the Spanish phrase “Plaza de Toros” as “bullring”, and bullfighting is known as “corrida de toros” in Spain. Bullfighting can also be seen in Portugal, southern France and in parts of Latin America.

16. Neeson of “Taken” : LIAM
Irish actor Liam Neeson got his big break when he played Oskar Schindler in the Spielberg epic, “Schindler’s List”. Neeson was in the news a few years ago when he lost his wife, actress Natasha Richardson, in a tragic skiing accident in 2009.

20. Color whose name comes from Urdu : KHAKI
“Khaki” is an Urdu word, translating literally as “dusty”. The word was adopted for its current use as the name of a fabric by the British cavalry in India in the mid-1800s.

30. Brownie : ELF
A brownie is an elfen figure in Scottish and English folklore. Brownies are purported to live in houses, helping with work around the house, but only at night when they can’t be seen. Believers might leave small items of food for the brownies, to encourage them to help out.

32. 2013 Spike Jonze film : HER
Spike Jonze is a movie director whose first feature film was “Being John Malkovich” (1999). Jonze also directed a couple of films for which he wrote the screenplays, namely “Where the Wild things Are” (2009) and “Her” (2013). Jonze also co-created the MTV show “Jackass”. Can’t stand that show, said he grumpily …

35. Monopoly quartet: Abbr. : RRS
The four railroad properties in the Monopoly board game are:

39. Number of graduates in the first class at West Point (1802) : TWO
West Point is a military reservation in New York State, located north of New York City. West Point was first occupied by the Continental Army way back in 1778, making it the longest, continually-occupied military post in the country. Cadet training has taken place at the garrison since 1794, although Congress funding for a US Military Academy (USMA) didn’t start until 1802. The first female cadets were admitted to West Point in 1976, and today about 15% of all new cadets are women.

42. Shimmer colorfully : OPALESCE
An opal is often described as having a milky iridescence, known as “opalescence”.

44. Muse for Keats : ERATO
In Greek mythology, Erato was the Muse of Lyric Poetry.

The English poet John Keats died in Rome in 1821, and is buried there in the Protestant Cemetery. His last wish was that his grave be marked with a tombstone bearing just the words “”Here lies One whose Name was writ in Water”, and no name nor date. Keats’ friends honored his request to some extent, as the words were included on the stone and no name is given. The full epitaph reads:
This Grave / contains all that was Mortal / of a / Young English Poet / Who / on his Death Bed, in the Bitterness of his Heart / at the Malicious Power of his Enemies / Desired / these Words to be / engraven on his Tomb Stone: / Here lies One / Whose Name was writ in Water. 24 February 1821

47. Bryophytic growths : MOSSES
Bryophytes are the collection of terrestrial plants that do not have vascular systems. Bryophytes are mainly the mosses, hornworts and liverworts.

50. Monster of Greek myth : HARPY
A harpy is a shrewish woman or a predatory person. The term comes from Greek mythology in which a harpy was a winged spirit noted for stealing food from a king called Phineus. Phineus angered the god Zeus and so was punished by being exiled to an island with a buffet of food that he could never eat. Every time he tried to eat, harpies would arrive and steal the food

53. Bids one club, say : OPENS
That would be “one club”, a possible opening bid in the card game of bridge.

55. Eyelashes, scientifically : CILIA
“Cilia” is the Latin for “eyelash”.