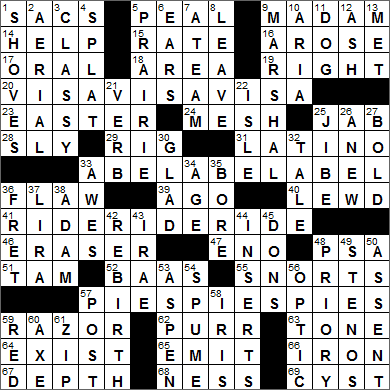 CROSSWORD SETTER: Jacob Stulberg
THEME: Three Identical Words? … each of today’s themed answers appears on the face of it to be three repeated words, but it isn’t:

20. In relation to someone’s travel document? : VIS-A-VIS A VISA (not “visa visa visa”)
We use the French phrase “vis-a-vis” to mean “with regard to” or “in relation to”. The literal translation from the French is “face to face”. When we imported the phrase into English in the mid-1700s, it had two other meanings that were more faithful to the original. Firstly, it could be a “face to face” meeting (not so today), and secondly, it was a type of carriage in which the occupants faced each other.

A visa is a usually a stamp in one’s passport, an indication that one is authorized to enter a particular country. The word “visa” comes into English, via French, from the Latin expression “charta visa” meaning “paper that has been seen”, or “verified paper”.

23. Holiday not widely observed by Quakers : EASTER
Members of the Religious Society of Friends are known as Friends or Quakers. The Christian sect started in England in the 1640s, led by George Fox. The principal tenet at that point was that Christians could have direct experience of Jesus Christ without the mediation of clergy, a reflection of the increasing dissatisfaction with the established church at that time. The term “Quaker” is thought to have been used earlier in reference to foreign religious sects whose followers were given to fits of shaking during religious fervor. Somehow that term became used for members of the Religious Society of Friends. Because the Friends trace their roots back to 16th-century Puritanism, most tend not to observe religious festivals such as Christmas, Lent or Easter, holding that the birth, crucifixion and resurrection of Christ should be commemorated every day.

31. Many a MundoFox watcher : LATINO
MundoFOX is a Spanish-language TV channel jointly owned by RCN Televisión and Fox International.

In the story of Cain and Abel in the Book of Genesis, Cain murders his brother Abel. Subsequently, God asks Cain, “Where is Abel thy brother?” Cain replies, “I know not. Am I my brother’s keeper?”

46. Paper Mate’s Pink Pearl, e.g. : ERASER
Pink Pearl is a brandname of eraser that is produced by the Paper Mate division of Newell Rubbermaid.

47. Brian who produced U2 : ENO
Brian Eno is a musician, composer and record producer from England who first achieved fame as the synthesiser player with Roxy Music. As a producer, Eno has worked with David Bowie, Devo and U2.

51. Cap named for a Robert Burns hero : TAM
A tam o’shanter is a man’s cap traditionally worn by Scotsmen. “Tams” were originally all blue (and called “blue bonnets”), but as more dyes became readily available they became more colorful. The name of the cap comes from the title character of Robert Burns’ poem “Tam O’Shanter”.

67. “Mark twain” measure : DEPTH
Samuel Langhorne Clemens was the real name of the author Mark Twain. Twain wasn’t the only pen name used by Clemens. Early in his career he signed some sketches as “Josh”, and signed some humorous letters that he wrote under the name “Thomas Jefferson Snodgrass”. The name of Mark Twain came from the days when Clemens was working on riverboats on the Mississippi. A riverboatman would call out “by the mark twain” when measuring the depth of water. This meant that on the sounding line, according to the “mark” on the line, the depth was two (“twain”) fathoms, and so it was safe for the riverboat to proceed.

68. Role for Costner or Stack : NESS
Eliot Ness was the Treasury agent charged with the task of bringing down the notorious Chicago gangster Al Capone. When Ness took on the job in 1930, Chicago law-enforcement agents were renowned for being corrupt, for being on the take. Ness handpicked 50 prohibition agents who he thought he could rely on, later reducing the group to a cadre of 15 and ultimately just 11 trusted men. That group of 11 earned the nickname “The Untouchables”, the agents who couldn’t be bought.

Eliot Ness was portrayed by Kevin Costner in “The Untouchables” (good movie).

The actor Robert Stack appeared in many Hollywood films, but he is best known for his TV appearances. Stack played Eliot Ness in the crime series “The Untouchables”, and was the host of “Unsolved Mysteries”.

Down
2. Like most Google Earth views : AERIAL
Google Earth is a program that maps the Earth by superimposing satellite images and aerial photographs. Google acquired the technology when it purchased Keyhole, Inc in 2004. Keyhole had been partially funded by the CIA.

4. Paintball impact sound : SPLAT!
The “paint” in paintball isn’t actually paint, but rather a mix of gelatin and food coloring.

5. With 11-Down, barking rodent : PRAIRIE
(11D. See 5-Down : DOG)
The prairie dog is a type of ground squirrel that is found in the grasslands of North America. Prairie dogs are so named because they inhabit prairies and because they have a warning call that is similar to the bark of a dog.

10. Bocelli piece : ARIA
Andrea Bocelli is a classically-trained tenor who sings popular music, a so-called cross-over artist. Bocelli was born with poor eyesight and then became totally blind at the age of 12 when he had an accident playing soccer.

12. Makeup of some bats : ASH
Most wooden baseball bats are made out of ash. Bats are also made of maple, although maple bats are falling out of favor due to a tendency for them to shatter.

13. “Miracle” player of 1969 : MET
The New York Mets baseball team was founded in 1962, a replacement for two teams that the city had lost, namely the Brooklyn Dodgers and the New York Giants. For several years the Mets played very poorly, finishing no better than second-to-last in their division. Then along came the “Miracle Mets” who beat the Baltimore Orioles in 1969 to claim the World Series in a huge upset.

22. Any of the Canaries : ISLE
The Canary Islands are located off the northwest coast of Africa. The islands aren’t named for the canary bird and in fact the bird is named for the islands. The Canary Islands name comes from the Latin “Canariae Insulae” which translates as “Island of the Dogs”, the original name for the biggest island now called Gran Canaria. In the days of Ancient Rome the island was noted as a home to a large number of very large dogs.

32. Chaucer piece : TALE
Geoffrey Chaucer was an English author. He is often referred to as the father of English literature because he established vernacular English as a legitimate language for artistic works, as up to that point authors used French or Latin. Chaucer’s most famous work is actually unfinished, a collection of stories called “The Canterbury Tales”, all written at the end of the 14th century.

34. Actuarial figure : AGE
In the world of insurance, an actuary is a person who works out the appropriate premium based on risk.

35. Barrel diameter : BORE
The bore of a rifle’s barrel is its internal diameter.

37. Turkish currency unit : LIRA
The word “lira” is used in a number of countries for currency. “Lira” comes from the Latin for “pound” and is derived from a British pound sterling, the value of a Troy pound of silver. For example, the lira (plural “lire”) was the official currency of Italy before the country changed over to the euro in 2002.

38. “Paradise Lost” character : ADAM
“Paradise Lost” is an epic poem written by Englishman John Milton. It is indeed an epic work, published originally in ten volumes with over ten thousand lines of verse. The “paradise” that is “lost” is the Garden of Eden, from which Adam and Eve were expelled by God in the “Fall of Man”.

43. “Dies ___” (hymn) : IRAE
“Dies Irae” is Latin for “Day of Wrath”. It is the name of a famous melody in Gregorian Chant, one that is often used as part of the Roman Catholic Requiem Mass.

49. Notepad holders of old : STENOS
Stenography is the process of writing in shorthand. The term comes from the Greek “steno” (narrow) and “graphe” (writing).

53. Wood used in matchmaking : ASPEN
The “quaking” aspen tree is so called because the structure of the leaves causes them to move easily in the wind, to “tremble, quake”. The wood of the aspen is soft, although very strong with a low flammability. It is the wood of choice for matches, as the low flammability adds an element of safety.

54. Surf froth : SPUME
Our word “spume” that we use for “froth” comes from the Latin “spuma” meaning “foam”.

56. ___ disc (blind spot) : OPTIC
The optic nerve enters the eyeball at a location on the retina called the optic disc. Because there are no light-sensitive cells at the optic disc, there is a “hole” in our visual field that is called the blind spot. People with normal vision don’t usually notice this blind spot as the brain “fills in” the blind spot with information from the other eye.

58. “Bearded” bloom : IRIS
Iris is a genus of flowering plants that come in a wide variety of flower colors. The term “iris” is a Greek word meaning “rainbow”. Many species of irises are called “flags”. One suggestion is that the alternate name comes from the Middle English “flagge” meaning “reed”. This term was used because iris leaves look like reeds.