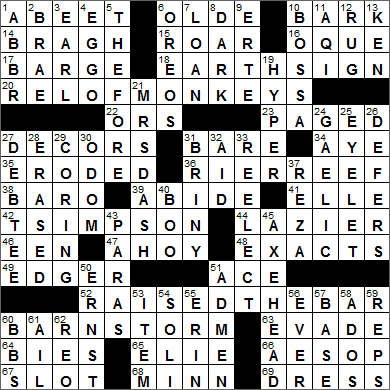 CROSSWORD SETTER: Peter A. Collins
THEME: Raise the Bar … the five themed answers in today’s grid have had THE BAR RAISED. The starting letters BAR of each answer has been RAISED to the line above:

52A. Elevated expectations … or what this puzzle’s maker did to five answers in this puzzle? : RAISED THE BAR

10A. Communicate like a drill sergeant : BARK
16A. Scarlatti’s style : (BAR)OQUE

60A. Campaign from town to town : BARNSTORM
64A. Line of Mattel dolls : (BAR)BIES

Today’s Wiki-est, Amazonian Googlies
Across
6. ___ English 800 (Miller Brand) : OLDE
Olde English 800 can be strong stuff, depending on where you buy it. The alcohol content can be as high as 8.0%, which is when produced for Canada.

14. Word after “go” in a seasonal phrase : BRAGH
“Erin go bragh!” is an anglicization of an Irish phrase “Éirinn go Brách!”, which translates as “Ireland Forever!”

16. Scarlatti’s style : BAROQUE
Something described as “baroque” is extremely ornate and convoluted. The term comes from the Baroque Period, in which many of the arts focused on great detail and elaborate design.

Alessandro Scarlatti was an Italian composer from Palermo who was active in the Baroque period. He is remembered today mainly for his operas. Alessandro was the father of composers Domenico Scarlatti and Pietro Filippo Scarlatti.

18. Capricorn, Taurus or Virgo : EARTH SIGN
Each of the twelve astrological signs is associated with one of the classical elements:

The story that Julius Caesar was born via a Caesarean section seems be unfounded. Although such procedures were indeed carried out in Ancient Rome there are no reports of the mother surviving (and Julius Caesar’s mother did raise her child).

38. Prefix with -meter : BARO-
A barometer is an instrument used to measure atmospheric pressure. There are several types of barometer, each using a different technology to measure pressure. Some use water or mercury in a tube. An aneroid barometer uses the amount of “bulge” in a thin metal disk covering a partially-evacuated chamber. This compact technology is often used in barometers that resemble clocks.

41. Magazine offering “Beauty Tips, Fashion Trends & Celebrity News” : ELLE
“Elle” magazine was founded in 1945 in France and today has the highest circulation of any fashion magazine in the world. “Elle” is the French word for “she”. “Elle” is published monthly worldwide, although you can pick up a weekly edition if you live in France.

42. Perpetual 10-year old of TV : BART SIMPSON
Bart Simpson is the main character in television’s “The Simpsons”. Bart’s name was chosen by the writers as it is an anagram of “brat”. Bart is voiced by actress and comedian Nancy Cartwright.

46. Velvet add-on : -EEN
Velveteen is an imitation velvet that is made from cotton or cotton and silk.

51. Part of a “wheel” hand in poker : ACE
In poker, a “wheel” or “bicycle” is a hand containing the cards 5-4-3-2-A, regardless of suit. In most games of poker, this is the lowest-ranking straight.

64. Line of Mattel dolls : BARBIES
The famous Barbie doll was created by businesswoman Ruth Handler and first appeared on store shelves in 1959. Barbie was based on a German fashion doll called Bild Lilli that was introduced in 1955. Lilli had been a German cartoon character before taking on a three-dimensional form. Prior to the introduction of Bild Lilli and Barbie, children’s dolls were primarily representations of infants.

65. Nobel laureate Wiesel : ELIE
Elie Wiesel is a holocaust survivor, best known for his book “Night” that tells of his experiences in Auschwitz and Buchenwald. Wiesel was awarded the Nobel Peace Prize in 1986.

66. Moral authority? : AESOP
Aesop is remembered today for his famous fables. Aesop lived in Ancient Greece, probably around the sixth century BC. Supposedly he was born a slave, somehow became a free man, but then met with a sorry end. Aesop was sent to the city of Delphi on a diplomatic mission but instead insulted the Delphians. He was tried on a trumped-up charge of stealing from a temple, sentenced to death and was thrown off a cliff.

67. Parking meter opening : SLOT
An early patent for a parking meter, dated 1928, was for a device that required the driver of the parked car to connect the battery of his or her car to the meter in order for it to operate!

68. Ont. neighbor : MINN
The US state of Minnesota shares a border with two Canadian provinces: Ontario and Manitoba.

69. Shift, maybe : DRESS
A shift is a dress that is cut above-the-knee and has no clearly-defined waist. This style of dress originated in the 1920s when it was worn by the “flappers”, young women who defied social norms at the time. The shift was comfortable to wear and allowed easy movement, particularly on the dance floor.

2. Hill by a loch : BRAE
“Brae” is a lowland Scots word for the slope or brow of a hill.

3. Court figure : EARL
In the ranking of nobles, an earl comes above a viscount and below a marquess. The rank of earl is used in the British peerage system and is equivalent to the rank of count in other countries. Other British ranks have female forms (e.g. marquess and marchioness, viscount and viscountess), but there isn’t a female word for the rank of earl. A female given the same rank as an earl is known as a countess.

4. Breakfast-on-the-run option : EGGO
Eggo is the brand name of a line of frozen waffles made by Kellogg’s. When they were introduced in the 1930s, the name “Eggo” was chosen to promote the “egginess” of the batter. “Eggo” replaced the original name chosen, which was “Froffles”, created by melding “frozen” and “waffles”.

10. ___ nova : BOSSA
Bossa Nova is a style of music from Brazil that evolved from samba. The most famous piece of bossa nova is the song “The Girl from Ipanema”.

12. Kilim or Kirman : RUG
A kilim is a tapestry-woven rug made in the Middle East and eastern Europe. As it has no pile, i.e. no upright yarns, a kilim rug is relatively cheap to produce and to purchase.

A Kirman rug is a Persian rug with ornate flowing designs made using muted colors. The rugs are named for the Iranian city of Kerman (also “Kirman”) located in the southeast of the country.

13. Watanabe of “The Last Samurai” : KEN
Ken Watanabe is an actor from Japan known mainly for his roles in the films “Letters from Iwo Jima” and “The Last Samurai”. My favorite of Watanabe’s movies though, is “Inception”. Great film …

19. Hopped up : HYPER
“To hop up” is to drug, to administer narcotics. The meaning can be extended to increasing the speed and power of a car, also known as “souping up”.

24. Language from which “slogan” and “spunk” come : GAELIC
Our word “slogan” comes from the Gaelic “sluagh-ghairm”, which was a battle cry used in Scotland and Ireland. We’ve been using “slogan” to mean a phrase used by a political or other movement since the early 1700s.

We’ve been using the word “spunk” to mean “pluck, courage” since the late 1700s. Prior to that it was a Scottish word meaning “spark” that we absorbed into English.

29. Geophysicist’s activity : CORING
A core sample is a cylindrical section of a substance that is obtained by drilling. Core samples can be taken from many different material, such as concrete, rock and even human tissue.

31. Like the Dead Sea : BRINY
The Dead Sea is a salt lake that lies over 1,000 feet below sea level in the Middle East. It is one of the saltiest bodies of water in the world, with a salt content that is almost ten times that of most oceans.

37. Iran’s ___ Shah Pahlevi : REZA
The last Shah of Iran was Mohammed-Reza Shah Pahlavi, as he was overthrown in the revolution led by the Ayatollah Khomeini in 1979. The post-revolution government sought the extradition of the Shah back to Iran while he was in the United States seeking medical care (he had cancer). His prolonged stay in the United States, recovering from surgery, caused some unrest back in Iran and resentment towards the United States. Some say that this resentment precipitated the storming of the US Embassy in Tehran and the resulting hostage crisis.

43. Law firm assistants, for short : PARAS
A paralegal is someone who is trained in legal matters sufficiently to assist a lawyer. A paralegal cannot engage in the practice of law and must be supervised by a qualified lawyer.

50. Dada pioneer Max : ERNST
Max Ernst was a painter and sculptor, a pioneer in the Dada movement and Surrealism. Ernst was born near Cologne in Germany in 1891 and he was called up to fight in WWI, as were most young German men at that time. In his autobiography he writes “Max Ernst died the 1st of August, 1914” a statement about his experiences in the war. In reality, Ernst died in 1976 having lived to the ripe old age of 85.

53. Twosome : ITEM
An unmarried couple known to be involved with each other might appear in the gossip columns. This appearance as “an item” in the papers, led to the use of “item” to refer to such a couple, but only since the very early seventies.

54. Singular efforts at La Scala? : SOLI
“Soli” (the plural of “solo”) are pieces of music performed by one artist, whereas “tutti” are pieces performed by all of the artists.

The La Scala Opera House opened in 1778. It was built on the site of the church of Santa Maria della Scala, which gave the theater its name: “Teatro alla Scala” in Italian.

58. Kerfuffles : ADOS
“Kerfuffle” comes from the Scottish “curfuffle”, with both words meaning “disruption”.

62. Early automotive inits. : REO
The REO Motor Company was founded by Ransom Eli Olds (hence the name REO). The company made cars, trucks and buses, and was in business from 1905 to 1975 in Lansing, Michigan. Among the company’s most famous models were the REO Royale and the REO Flying Cloud.