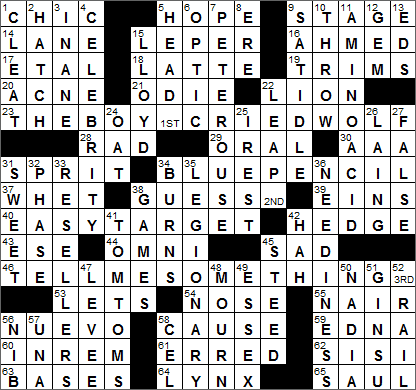 CROSSWORD SETTER: Jacob Stulberg
THEME: Base Routine … we are reminded in today’s puzzle of everyone’s favorite Abbott and Costello routine “Who’s on First?” Three squares in the grid use the base numbers FIRST, SECOND and THIRD, for the down-answers:

From the comedy routine we know that:

We use WHO, WHAT and I DON’T KNOW as part of the across-answers:

9. Larva, e.g. : STAGE
The larva is an intermediate stage in the development of an insect. All four stages are embryo, larva, pupa and imago.

14. Strike zone? : LANE
A ten-pin bowler marks down an X when he or she makes a strike.

15. Biblical outcast : LEPER
The horrible disease known as leprosy is also called Hansen’s disease, named after the Norwegian physician famous for isolating the bacterium that causes the disease. We can use the term “leper” to mean someone in general who is shunned by society.

16. “Arabian Nights” prince : AHMED
In the “Arabian Nights”, Prince Ahmed is noted for having a magic tent which would grow larger to shelter an army, and then grow small again so that it could fit into a pocket.

18. Iced ___ : LATTE
The term “latte” is an abbreviation of the Italian “caffelatte” meaning “coffee (and) milk”. Note that in the correct spelling of “latte”, the Italian word for milk, there is no accent over the “e”. An accent is often added by mistake when we use the word in English, perhaps meaning to suggest that the word is French.

23. One of Aesop’s fables : THE BOY WHO CRIED WOLF
“The Boy Who Cried Wolf” is one of Aesop’s fable, and the tale that gives rise to our phrase “to cry wolf”, which means to give a false alarm. In the fable, a shepherd boy is in the habit of tricking nearby villagers into thinking a wolf is attacking his flock by crying “wolf!”. When an actual attack is made, the villages assume it’s another false alarm and the sheep are are eaten by the wolf.

28. Nuclear plant unit : RAD
A rad is a unit used to measure radiation levels that is largely obsolete now. The rad has been superseded by the rem.

29. Like some contracts : ORAL
An oral contract is just as valid as a written contract in most cases. The phrase “verbal contract” is sometimes used to describe a contract that is agreed by spoken communication, but this is inaccurate. A verbal contract is simply one that uses words, and can be either written or spoken.

31. Diagonal spar : SPRIT
A sprit is a pole that extends out from a mast, often supporting a special sail called a spritsail.

34. Edit : BLUE-PENCIL
The tradition is that an editor writes corrections to written copy using a blue pencil. The practise arose with the introduction of the “non-photo blue” pencil, which had a color that did not show up in some photographic reproduction processes.

37. Make keen : WHET
The words “whet” and “pique” can both be used in the sense of sharpening or awaking one’s interest or desire.

43. Lagos-to-Dar es Salaam dir. : ESE
Lagos is a port and the biggest city in Nigeria. Lagos used to be the country’s capital, until it was replaced in that role in 1991 by Abuja, a city built for just for this purpose.

44. Prefix with science : OMNI-
“Omniscience” is the quality of having complete knowledge and awareness. The term comes from the Latin “omnis” meaning “all” and “scientia” meaning “knowledge”.

53. Instances when service isn’t perfect? : LETS
An umpire might call “let!” in a game of tennis.

55. Veet rival : NAIR
Nair is a hair removal product that has some pretty harsh ingredients. The most important active constituents are calcium hydroxide (“slake lime”) and sodium hydroxide (“caustic soda”). Other Nair components seem to be there to soothe the skin after the harsher chemicals have done their job. The name “Nair” probably comes from combining “no” and “hair”.

The hair removal product “Neet” was launched in Canada in 1901, and was also sold as “Immac”. Today it is sold under the name “Veet”.

60. Against a thing, legally : IN REM
“In rem” translates from Latin as “in a thing”. In a lawsuit, an action is described as “in rem” if it is directed against some property. This would be the case if someone disputes ownership of a piece of land, for example. An action “in personam” on the other hand, is directed against a specific individual.

62. “They say” it in Spain, in an old Andrews Sisters hit : SI SI
“Say ‘Si Si’” is a song first published in 1935, composed by Ernesto Lecuona, with lyrics originally in Spanish. The most famous recordings of the song were by the Andrews Sisters and by the Glenn Miller Orchestra.

But, Sweetheart, tell me why
No matter how I try
You won’t listen to my plea
Won’t say “Yes” in any language to me
When will you say “Si, Si”

The Andrews Sisters of the boogie-woogie era really were sisters, from Mound, Minnesota. The trio consisted of LaVerne, Maxene and Patty Andrews. Their biggest hit was 1941’s marvelous “Boogie Woogie Bugle Boy”.

– First Base: Who
– Second Base: What
– Third Base: I Don’t Know
– Left field: Why
– Center field: Because
– Pitcher: Tomorrow
– Catcher: Today
– Shortstop: I Don’t Care/I Don’t Give a Darn

64. Cat with tufted ears : LYNX
A lynx is a wild cat, of which there are four species. These are:

65. For whom David played the harp : SAUL
According to the Bible’s Book of Samuel, Saul was troubled by an evil spirit sent by God. David is a skilled soldier and harpist and is sent to the Saul to play for him. David is then appointed as Saul’s armor bearer and remains at court, playing his harp as required.

Down
6. Part of FiOS : OPTIC
FiOS is a service from Verizon that bundles Internet, telephone and television service. All three services are provided over fiber-optic lines, right to the door.

Leucine is an essential amino acid meaning that it cannot be made in the body, so much be consumed in the diet. Leucine s sometimes taken as dietary supplement as there is some evidence that it slows the degradation of muscle tissue.

15. Frank ___, two-time Best Director Oscar winner : LLOYD
Frank Lloyd was a film director originally from Scotland, and a winner of two Academy Awards. He didn’t win an Oscar for his most famous film though, the 1935 classic “Mutiny on the Bounty” starring Clark Gable and Charles Laughton.

22. Tiny adjustment to an atomic clock : LEAP SECOND
Coordinated Universal Time (UTC) is the primary time standard used to regulate clocks around the world. Because the Earth’s rotational speed is decreasing ever so slowly, UTC can vary slightly from solar time. As a result, leap seconds are added as required to UTC, on average about once every 19 months. Leap seconds are always added on June 30th or December 31st.

24. Quaker ___ Bran : OAT
The Quaker Oats Company was founded in 1901 when four oat mills merged, including the Quaker Mill Company of Ravenna, Ohio. Quaker Mill’s owner Henry Parsons Crowell played the key role in the new company and remained at the helm until 1943.

26. Psychiatry writer R. D. ___ : LAING
R. D. Laing was a controversial Scottish psychiatrist. Laing was associated with the anti-psychiatry movement, holding the view that psychiatric treatments are often more damaging to to patients rather than helpful.

32. Half-moon, e.g. : PHASE
The phases of the moon have been given the following names, in order:

33. Pawnshops and such : RESELLERS
The tradition sign outside a pawnbroker’s shop consists of three balls. This symbol dates back to the Middle Ages, where it was used on coats of arms as a sign of monetary success. The running joke is that the three balls mean “two to one, you won’t get your stuff back”.

35. Roman soldier : LEGIONARY
In Ancient Roman, a legionary was a professional soldier, a heavy infantryman. As a result, a legionary was loaded down with armor including a shield, helmet, a pair of javelins, a short sword and a dagger.

38. Darts and hearts : GAMES
Darts is a wonderful game often played in English and Irish pubs, even over here in America. The scoring in a traditional game of darts is difficult to describe in a sentence or two, but the game of darts called “Round the Clock” is simply hitting the numbers 1 through 20 in sequence.

41. The Indians regularly beat them : TOM-TOMS
The tom-tom is a drum played with the hands, which gave its name to a dull, repeating beat or sound.

47. Surge protector? : LEVEE
A levee is an artificial bank usually made of earth, running along the length of a river. A levee is designed to hold back river water at a time of potential flooding. “Levée” is the French word for “raised” and is an American term that originated in French-speaking New Orleans around 1720.

49. Clacton-on-Sea’s county : ESSEX
Clacton-on-Sea is a seaside resort in Essex on the southeast coast of England. I spent many a summer day at Clacton with my family when I was a young lad …

50. Petrova of tennis : NADIA
Nadia Petrova is a tennis player from Moscow who has ranked third in the world in doubles. Petrova has a good complement of athletic genes as her father was a successful hammer thrower and her mother won an Olympic bronze in the 400m track relay.

51. Kind of knife : GINSU
Ginsu knives are more famous for their hard-sell television ads than they are for their efficacy in the kitchen. The Ginsu phenomenon took off in the seventies when two brothers found a set of knives called “Eversharp” that were being manufactured in Ohio. The brothers changed the brand name to something more exotic, and Japanese in particular (Ginsu), and then produced ads that made references to Japanese martial arts. I think they made a fortune …

52. Subway power source : THIRD RAIL
The first commercial uses of a third rail to power trains were actually in Ireland, with the Giant’s Causeway Tramway in 1883, and the Bessbrook and Newry Tramway in 1885.

56. Pen part : NIB
“Nib” is a Scottish variant of the Old English word “neb”, with both meaning the beak of a bird. This usage of “nib” as a beak dates back to the 14th century, with “nib” meaning the tip of a pen or quill coming a little later, in the early 1600s.

The Andes is the longest continuous chain of mountains in the world, running right down the length of the west coast of South America for about 4,300 miles. The highest peak in the range is Mt. Aconcagua, at an elevation of 22,841 feet. Interestingly, the peak of Mt. Chimborazo in Ecuador is the furthest point on the Earth’s surface from the center of the planet. That’s because of the equatorial “bulge” around the Earth’s “waist”.

58. Image of Pluto, say : CEL
In the world of animation, a cel is a transparent sheet on which objects and characters are drawn. In the first half of the 20th century the sheet was actually made of celluloid, giving the “cel” its name.