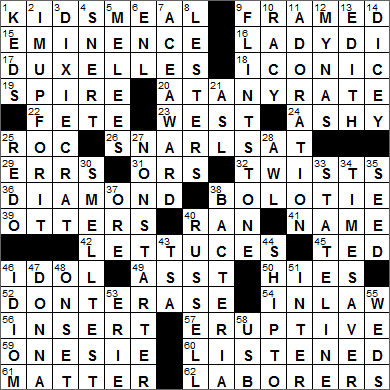 Today’s Wiki-est, Amazonian Googlies
Across
9. Like TV’s Dr. Richard Kimble, famously : FRAMED
If you recall the beginning of each episode of “The Fugitive” television series, there was a narration that summarized the background to the show. It started off “The Fugitive, a QM Production — starring David Janssen as Dr. Richard Kimble: an innocent victim of blind justice, falsely convicted for the murder of his wife …” Those words were read by actor William Conrad, who made a name for himself in his detective series playing the portly “Cannon”.

16. Spectator who got a standing O at Wimbledon in 1981 : LADY DI
Charles, Prince of Wales married Lady Diana Spencer in 1981 at St. Paul’s Cathedral in London. The wedding was a huge television event, with about 750 million people tuning in worldwide. Although the event was billed as a fairytale wedding, the couple separated in 1992 and divorced in 1996.

17. Mushroom layer of a beef Wellington : DUXELLES
“Duxelles” is a mixture of chopped mushrooms, onions, shallots and herbs that have been sauteed and then reduced to a paste. I am a huge, huge fan of duxelles …

18. Quintessential : ICONIC
In Ancient Greece, Aristotle believed that there was a fifth element, beyond the accepted four elements of earth, wind, fire and water. This fifth element he called aether, postulating it was the makeup of celestial bodies. In Middle French in the 14th century, the “fifth element” was called “quinte essence”, coming into English as “quintessence’ in the early 15th century. In the late 1500s, quintessence came to mean “purest essence” in a more general sense, with quintessential meaning “at it’s finest”.

25. Danger in stories of Sinbad the sailor : ROC
The mythical roc is a huge bird of prey, reputedly able to carry off and eat elephants. The roc was said to come from the Indian subcontinent. The supposed existence of the roc was promulgated by Marco Polo in the accounts that he published of his travels through Asia.

31. Where most occupants need masks, for short : ORS
Operating room (OR)

36. Pirates’ place : DIAMOND
The Pittsburgh Pirates (nicknamed the Bucs or Buccos) joined baseball’s National League in 1887 just six years after the league was formed. The Pirates played in the first ever World Series in 1903, and won their first World Series in 1909.

45. Annual Vancouver event, familiarly : TED
The acronym TED stands for Technology Entertainment and Design. TED is a set of conferences held around the world (the main event held in Vancouver) by a non-profit group called the Sapling Foundation. The conference subjects are varied, and the meetings are often led by big names such as Bill Clinton, Al Gore, Bill Gates and Jane Goodall. The Sapling Foundation then makes recordings of the conferences available for free online with the intent of disseminating the ideas globally. These conferences are known as “TED Talks”.

59. Layette item : ONESIE
A “onesie” is a baby’s bodysuit, and is a common gift at a baby shower.

62. “Das Kapital” topic : LABORERS
“Das Kapital” (entitled “Capital” in English versions) is a book about political economy written by Karl Marx, first published in 1867. The book is in effect an analysis of capitalism, and proffers the opinion that capitalism relies on the exploitation of workers. Marx concludes that the profits from capitalist concerns come from the underpaying of labor.

Down
1. Footwear donned on camera by Mr. Rogers : KEDS
Keds is a brand name of athletic shoe first introduced in 1916 by US Rubber. The shoe was originally marketed as a rubber-soled, canvas-topped sneaker.

3. Onetime Strom Thurmond designation : DIXIECRAT
Dixiecrats were members of the States’ Rights Democratic Party, a segregationist group that was disbanded after only a few months of activity, in 1948. The Dixiecrats were a breakaway faction from the Democratic Party. The Dixiecrat party platform was centered around States’ rights, racial segregation and white supremacy.

4. Comics pet in a horned helmet : SNERT
Snert is the clever dog that belongs to Hägar the Horrible in the classic comic strip.

5. Rows : MELEES
Our word “melee” comes from the French “mêlée”, and in both languages the word means “confused fight”.

7. TV honor last presented in 1997 : ACE AWARD
The ACE Awards were instituted in 1978, with the acronym standing for “Award for Cable Excellence”. The name of the award was later changed to the Cable ACE Award, and honored excellence in cable television programming. The award was abandoned after the 1997 ceremony as recognition of cable programming at the Emmys made a separate cable TV award redundant.

8. Newsman Holt and others : LESTERS
Lester Holt is a television journalist. Holt is anchor for the weekend editions of the shows “Today” and “Nightly News” on NBC, as well as the show “Dateline NBC”.

9. Noted employee of Slate : FLINTSTONE
In “The Flintstone” animated TV show, Fred Flintstone operates a bronto-crane at the Slate Rock and Gravel Company, which is owned by Fred’s boss Mr. Slate.

12. Winged mimics : MYNAS
Some species of myna (also “mynah”) bird are known for their ability to imitate sounds.

13. Mrs. Theodore Roosevelt : EDITH
Edith Carow was the second wife of Theodore Roosevelt and the First Lady of the US when President Roosevelt was in office. Theodore’s first wife was Alice Hathaway Lee who died two days after the birth of their daughter in 1884. Roosevelt proposed to Carow in 1885 and the couple were married in 1886. Carow survived her husband, who died in 1919. The former First Lady briefly came out of retirement during the 1932 presidential election to campaign for President Herbert Hoover, which put Edith in opposition to her cousin-in-law Franklin D. Roosevelt.

21. Class in which students raise their hands, briefly? : ASL
It’s really quite unfortunate that American Sign Language (ASL) and British Sign Language (BSL) are very different, and someone who has learned to sign in one cannot understand someone signing in the other.

28. Corset-making tool : AWL
I guess one might use an awl to make holes in the whalebone that often is incorporated into corsets.

40. “The Principles of Mathematics” philosopher : RUSSELL
Bertrand Russell was a British philosopher, a noted liberal and outspoken pacifist.

43. Org. conducting lots of X-rays : TSA
The Transportation Security Administration (TSA) was created in 2001, soon after the 9/11 attacks. TSA personnel carry out the baggage and body searches at US airports.

44. U.P.S. label phrase : SHIP TO
United Parcel Service (UPS) is based in Sandy Springs, Georgia and has its own airline that operates out of Louisville, Kentucky.

47. 1959 #2 hit whose flip side was “La Bamba” : DONNA
The 1958 single “Donna” by Ritchie Valens is one of those A-sides that was outshone by the record’s B-side, which in this case was “La Bamba”. “Donna” was written as a tribute ot Valens’ high school sweetheart Donna Ludwig.

53. New York county on the Canadian border : ERIE
Erie County lies just west of Wyoming County in New York State. Erie County is home to the city of Buffalo, and sits right on the shores of lake Erie.

58. Kind of port : USB
Universal Serial Bus (USB) is an industry standard dealing with how computers and electronic devices connect and communicate, and deal with electrical power through those connections.