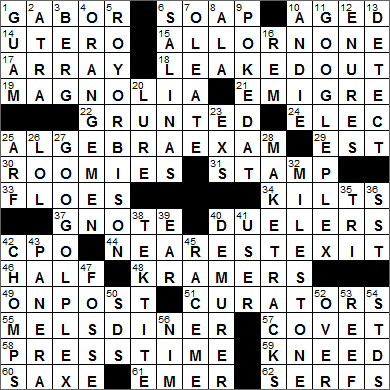 CROSSWORD SETTER: Barry C. Silk
THEME: None … well, there’s a mini-theme with GOOGLEPLEX and GOOGOLPLEX nicely placed in the grid:

Today’s Wiki-est, Amazonian Googlies
Across
1. Socialite who wrote “How to Catch a Man, How to Keep a Man, How to Get Rid of a Man” : GABOR
Zsa Zsa Gabor is a Hungarian American actress, born in Budapest as Sári Gábor (the older sister of the actress Eva). Zsa Zsa Gabor has been married a whopping nine times, including a 5-year stint with Conrad Hilton and another 5 years with the actor George Sanders. One of Gabor’s famous quips was that she was always a good housekeeper, as after every divorce she kept the house!

10. Acquired wisdom, per a saying : AGED
“Wisdom comes with age”.

14. In ___ diagnosis : UTERO
“In utero” is a Latin term meaning “in the uterus”. The Latin “uterus” translates as both “womb” and “belly”. The Latin word was derived from the Greek “hystera” also meaning womb, which gives us the words “hysterectomy”, and “hysterical”.

19. Image on Mississippi’s state quarter : MAGNOLIA
The Mississippi state quarter features two magnolia blossoms, and was first issued on October 15, 2002. Mississippi is known as the home to many stately Magnolia trees, giving it the nickname “the Magnolia State”.

21. Edward Snowden, notably : EMIGRE
Edward Snowden is a former NSA contractor who leaked several top secret NSA documents to the media beginning in June 2013. After disclosing his name as the source of the leaks, Snowden tried to seek asylum in Ecuador. While travelling to Ecuador he had a layover in Moscow. While in Moscow, the US government revoked his passport, which effectively left him stranded in the transit area of Moscow Airport. The Russian government eventually granted him annually renewable temporary asylum.

25. Series of unknown challenges? : ALGEBRA EXAM
Algebra is a branch of mathematics in which arithmetical operations are performed on variables rather than specific numbers (x,y etc). The term “algebra” comes from the Arabic “al jebr” meaning “reunion of broken parts”.

33. Labrador Sea sights : FLOES
An ice floe is a sheet of ice that has separated from an ice field and is floating freely on the ocean.

The Labrador Sea in the North Atlantic Ocean is located between the Labrador Peninsula and Greenland.

34. Highland games gear : KILTS
Highland games are centered on competitions of strength, as well music and dance contests. The Cowal Games in Dunoon, Scotland is the largest games in the world in numbers of participants. However, the games hosted by the Caledonian Club of San Francisco in Pleasanton, California (my hometown) is the largest in the world in numbers of attendees.

42. U.S.C.G. rank : CPO
A Chief Petty Officer (CPO) is a non-commissioned officer (NCO) in the Navy (USN) and Coast Guard (USCG). The “Petty” is derived from the French word “petit” meaning “small”.

48. Divorced title couple of film : KRAMERS
“Kramer vs. Kramer” is a 1979 film based on a Avery Corman novel. The movie stars Meryl Streep and Dustin Hoffman as a couple getting a divorce, and the impact that the breakup has on their young son.

51. Exhibitionists? : CURATORS
The term “curator” is Latin and applies to a manager, guardian or overseer. In English, the original curators were the guardians and overseers of minors and those with mental disease.

55. 1970s-’80s sitcom locale : MEL’S DINER
The TV sitcom “Alice” ran from 1976 to 1985, a story about a widow named Alice who takes a job at Mel’s Diner. The show was based on a very successful 1974 movie called “Alice Doesn’t Live Here Anymore” directed by Martin Scorsese (his first Hollywood production) and starring Ellen Burstyn and Kris Kristofferson.

60. Old German duchy name : SAXE
Saxony was the name given at different times in history to states along the Elbe river in central Europe. As the various states broke up, they spawned many duchies that retained the name “Saxe”. The most famous of these duchies was probably Saxe-Coburg and Gotha, two united duchies in Germany that ceased to exist after WWII. A notable branch of the Saxe-Coburg and Gotha House is the British Royal Family, as Queen Victoria was married to Prince Albert of Saxe-Coburg and Gotha. King George V of the United Kingdom changed the name of the family to the House of Windsor in a politically sensible move during WWI.

62. Ones in bondage : SERFS
A serf was a member of the lowest feudal class, someone attached to land owned by a lord. “Serf” comes from the Latin “servus”, meaning “slave”.

Down
1. Where Chamorro is spoken : GUAM
Chamorro is a language spoken on Guam and on the Northern Mariana Islands.

Guam is a US territory in the western Pacific Ocean, the largest of the Mariana Islands. Guam is also the first territory in the United States to see the sun rise on any particular day. As such, the territory has adopted the motto, “Where America’s day begins”. During WWII, the US territory of Guam was occupied by the Japanese for 31 months until it was liberated in the Battle of Guam in July 1944. Of the 18,000 Japanese men holding the island, only 485 surrendered, so almost all perished in the invasion. One Japanese sergeant hid out on the island for an incredible 28 years, finally surrendering in 1972!

2. Blade handle? : ATRA
Fortunately for crossword constructors, the Atra razor was introduced by Gillette in 1977. The Atra was sold as the Contour in some markets and its derivative products are still around today.

3. “Lulu” opera composer : BERG
Alban Berg was a composer from Austria. He was one of the members of what is called the Second Viennese School, along with Arnold Schoenberg and Anton Weber. This group embraced the concept of atonality, something which frankly is beyond me …

4. 2003 N.C.A.A. hoops champs : ORANGEMEN
The Orange are the athletic teams of the Syracuse University. I should know that as I lived in Syracuse for three years when I moved to the US back in 1983. And, I met my wife there, so happy memories …

5. Subject of the 2013 musical biography “Rhapsody in Black” : ROY ORBISON
Roy Orbison had to be one the sickliest looking performers I’ve ever seen. Orbison had a very sallow complexion, pock-marked from teenage acne. The yellowish skin tone came from a severe bout of jaundice as a child. Perhaps poor nutrition affected him and his siblings, because all of them had very poor eyesight, with Roy almost blind and wearing very thick lenses from a very young age. He was also very ashamed of his head of hair, which was almost a ghostly white, and so he dyed it jet black even when he was young. Despite all this, he was immensely popular in his heyday with teenage girls, particularly in Canada and Ireland for some reason. On a tour of Ireland in 1963, the Irish police had to stop one of his performances in order to pull a bevy of local lasses off poor Mr. Orbison …

7. 6-Across ingredient : OLEATE
(6A. It’s slippery when wet : SOAP)
Oleic Acid is a fatty acid, found in many animal and plants sources, but most notably in olives. As such, “Oleic” means “derived from the olive”. Oleic acid dissolves in basic solutions to create soaps.

12. Hardens : ENURES
“Enure” is a variant spelling of “inure”, meaning to harden oneself against the effects of, to accustom oneself to.

16. Acronym associated with retirement? : REM
REM is an acronym standing for Rapid Eye Movement sleep. REM sleep takes up 20-25% of the sleeping hours and is the period associated with one’s most vivid dreams.

George Strait is a country music singer, known as the “King of Country”. The moniker seems to be well deserved as Strait has had more number one hits on Billboard’s list of Hot Country Songs than any other artist.

27. Vast number : GOOGOLPLEX
(11D. Corporate headquarters in Mountain View, Calif. : GOOGLEPLEX)
A “googol” is 10 raised to the power of 100. The term “googol” was coined by the nine-year-old nephew of American mathematician Edward Kasner. The uncle had asked the boy to come up with an interesting name for “a very large number”. Kasner then came up with the name “googleplex”, which he defined as 1 followed by as many zeros one could write before getting tired. He later refined to definition of a googolplex to be 10 to the power of a googol. And yes, the search engine called “Google” is a deliberate misspelling of “googol”, and Google’s headquarters in Mountain View, California is called the Googleplex, a similar deliberate misspelling.

28. Skedaddle : MAKE TRACKS
“Skedaddle ” is a slang term meaning “run away” that dates back to the Civil War.

36. Retired runway model : SST
The most famous supersonic transport (SST) is the retired Concorde. Famously, the Concorde routinely broke the sound barrier, and cruised at about twice the speed of sound. Above Mach 2, frictional heat would cause the plane’s aluminum airframe to soften, so airspeed was limited.

38. Meteorite impact product : TEKTITE
Tektites are small pieces of natural glass that are formed when meteorites impact the Earth.

43. Sandwich chain : PANERA
Panera Bread is a chain of bakery/coffeehouses. It’s a good place to get online while having a cup of coffee. Back in 2006 and 2007, Panera was the largest provider of free Wi-Fi access in the whole of the US.

45. Flower-bearing shoot : RACEME
A raceme is a long stalk with flowers placed at equal distances from each along its length. It just keeps growing, and new flowers appear at the tip.

47. Best Musical after “The Lion King” : FOSSE
“Fosse” is a musical revue that opened on Broadway in 1999 and ran for over a thousand performances. It showcases the choreography of Bob Fosse.

Bob Fosse won more Tony Awards for choreography than anyone else, a grand total of eight. He also won an Oscar for Best Director for his 1972 movie “Cabaret”, beating out the formidable Francis Ford Coppola who was nominated that same year for his epic, “The Godfather”.

50. Org. with buttons that said “There’s a change gonna come” : SDS
Students for a Democratic Society (SDS) was an activist group in the sixties. The SDS organized the largest student strike in the history of the United States on 26 April 1968, with about a million students staying away from class that day. The “Students for a Democratic Society” name was revived in 2006 with the foundation of a new US-based student organization with left wing beliefs. Today’s SDS was founded by a pair of high school students from Greenwich Village, New York.

53. The Keys, essentially : REEF
A “key” (also “cay”) is a low island offshore, as in the Florida Keys. Our term in English comes from the Spanish “cayo” meaning “shoal, reef”.

56. Math-based game : NIM
Nim is an ancient entertainment, a simple mathematical game of strategy. Nim involves removing items from distinct piles (say matchsticks). Each player must remove at least one item per turn, and the last person to remove an item is the loser.