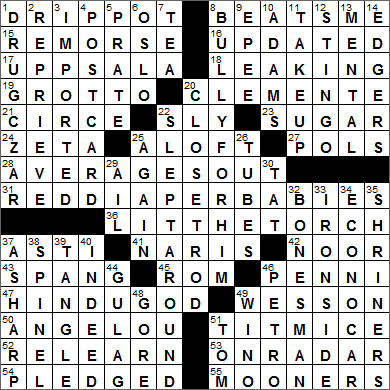 Today’s Wiki-est, Amazonian Googlies
Across
15. Parole board consideration : REMORSE
The term “parole” is a French word that we use in English, with the French “parole” meaning “word, speech”. Of particular interest is the French phrase “parole d’honneur” which translates as “word of honor”. In the early 1600s we started using “parole” to mean a promise by a prisoner of war not to escape, as in the prisoner giving his “word of honor” not to run off. Over time, parole has come to mean conditional release of a prisoner before he or she has served the full term of a sentence.

17. Swedish university where Anders Celsius taught : UPPSALA
Uppsala is the fourth largest city in Sweden and is home to Uppsala University founded in 1477, the oldest university in the whole of Scandinavia. I very nearly went to study at Uppsala University, but in 1979 and not in 1477 …

19. Natural shelter : GROTTO
A “grotto’ is a cave or cavern. It is a word that we have imported from Italian, in which language it has the same meaning, or can describe a vault.

20. Hall-of-Famer with exactly 3,000 hits : CLEMENTE
Roberto Clemente was a Major League Baseball player from Puerto Rico who played for the Pittsburgh Pirates from 1955 to 1972. Clemente devoted much of his spare time in charity work in Caribbean countries, and in 1972 flew to Nicaragua to deliver aid to to earthquake victims. While en route, Clemente was killed in a plane crash.

21. Goddess of magic : CIRCE
Circe is a minor goddess in Greek mythology, the goddess of magic. She was fond of transforming those who did not please her into animals by using magical potions.

24. Sixth in a series : ZETA
Zeta is the sixth letter of the Greek alphabet, and is a precursor of our Roman letter Z. The word “zeta” is also the ancestor of the name “zed”, which became “zee”, the pronunciation that we use here in the US.

31. Children of American Communists : RED DIAPER BABIES
A “red diaper baby” is a child of a parent who was a member of the US Communist Party, or more generally the child of any radical parent.

41. Hole in the head : NARIS
The nostrils are also called the “nares” (singular “naris”).

42. Former Jordanian queen : NOOR
Queen Noor is the widow of King Hussein of Jordan. Queen Noor was born Lisa Halaby in Washington, D.C., the daughter of Najeeb Halaby. Her father was appointed by President Kennedy as the head of the Federal Aviation Administration, and later became the CEO of Pan Am. Lisa Halaby met King Hussein in 1977, while working on the design of Jordan’s Queen Alia Airport. The airport was named after King Hussein’s third wife who had been killed that year in a helicopter crash. Halaby and the King were married the next year, in 1978.

43. Exactly, informally : SPANG
“Spang” is an informal term (that’s new to me) meaning “precisely, squarely”, as in “spang in the middle of this mess”.

46. Bygone Finnish coin : PENNI
A penni was one hundredth of a markka, the currency of Finland that was used until it was replaced by the euro in 2002. The markka was introduced by the Finns in 1860 to replace the Russian ruble.

47. Deva, for one : HINDU GOD
In the Hindu transition, the devas are benevolent deities. The female form of “deva” is “devi”.

49. Big name in oil : WESSON
Wesson cooking oil was named for David Wesson, a food chemist who came up with a process to deodorize cottonseed oil in 1899. Wesson used to be pure cottonseed oil, but is now a mixture of cheaper vegetable oils.

50. Poet who won three Grammys for Best Spoken Word Album : ANGELOU
Maya Angelou is an African-American autobiographer and poet. Angelou recited her poem “On the Pulse of Morning” at the inauguration of President Clinton in 1983.

51. Tufted songbirds : TITMICE
The birds known as chickadees or titmice in North America, are usually called simply “tits” in the rest of the English-speaking world.

53. Being tracked, in a way : ON RADAR
Scientists have been using radio waves to detect the presence of objects since the late 1800s, but it was the demands of WWII that accelerated the practical application of the technology. The British called their system RDF standing for Range and Direction Finding. The system used by the US Navy was called Radio Detection And Ranging, which was shortened to the acronym RADAR.

55. Tail waggers? : MOONERS
The first recorded mooning incident took place in 66 AD, during the First Roman-Jewish War. Roman soldiers decided to moon Jewish pilgrims as they traveled to the Jewish Temple in Jerusalem.

Down
3. Unsuitable for locavores : IMPORTED
A “locavore” is someone who limits his or her diet to food that is produced locally, often within 100 miles of its point of purchase. There’s a great memoir by the author Barbara Kingsolver that discusses the experiences of her and her family with the locavore lifestyle called “Animal, Vegetable, Miracle: A Year of Food Life” An excellent read …

6. Setting for Ibsen’s “Hedda Gabler” : OSLO
“Hedda Gabler” is a play by the great Norwegian playwright Henrik Ibsen, first published in 1890. Considered one of the greatest theater roles, the title character of Hedda Gabler is sometimes referred to as “the female Hamlet”.

9. French pioneer of sign language : EPEE
The French clergyman Abbé Charles-Michel de l’Épée is often referred to as the “Father of the Deaf”. Épée dedicated much of his life to helping the deaf. He opened the world’s first free school for the deaf in 1760 in Paris, initially using it to provide shelter for those who were poor and hearing-impaired. Épée developed a type of sign language that is believed to be the first example of a formal and complete visual-gesture system for the deaf.

12. British beer with a kick : STINGO
“Stingo” is a slang term for strong ale that is sometimes used in Britain, especially in Yorkshire in the north of England.

13. Bonkers : MENTAL
The word “bonkers” meaning “crazy” originated in the fifties. The term might come from navy slang meaning “slightly drunk”, behaving as though one received a “bonk” on the head.

20. What may help you hang in there? : CLOSET ROD
In old French a “clos” was an enclosure, with the diminutive form “closet” describing a small enclosure or private room. Over time this evolved into our modern usage, to describe a cabinet or cupboard.

30. Forever stamp? : TAT
The word “tattoo” (often shortened to “tat”) was first used in English in the writings of the famous English explorer Captain Cook. In his descriptions of the indelible marks adorning the skin of Polynesian natives, Cook anglicized the Tahitian word “tatau” into our “tattoo”.

32. Secret society brother to George W. Bush and John Kerry : BONESMAN
Skull and Bones is a secret society at Yale University, founded in 1832. The society is well funded, and even owns a 40-acre island in Upstate New York that members and alumni use as a retreat. Noted members of Skull and Bones included William F. Buckley, Jr., President Bush (both father and son) and Senator John Kerry. And President William Howard Taft was the son of one of the society’s founders.

33. 1960s-’70s detective series : IRONSIDE
“Ironside” is a classic police television drama that first ran from 1967 to 1975. Star of the show is Raymond Burr playing the partially paralyzed former Chief of Detectives Robert T. Ironside. Ironside was forced to retire from the SFPD when he was shot by a sniper, but ended up as special consultant to the department.

35. Group governed by the Imperial Divan : SHRINERS
The Shriners are an offshoot of the Freemasons. One of the founders was Walter Fleming, who picked up the idea of creating a group with a Middle Eastern theme after witnessing an Arabian musical comedy in Southern France and again in North Africa. He gave the group its name, the Ancient Order of the Nobles of the Mystic Shrine, or Shriners for short.

38. Rubylike gem : SPINEL
Spinel is a magnesium aluminate mineral that is sometimes used as a gemstone. Two of the more famous gem-quality spinels are the Black Prince’s Ruby and the Timur Ruby, both of which are in the British Crown Jewels collection. Spinels are distinct from rubies, but the rose-tinted variety used to be called Balas rubies.

44. Place bereft of happy campers? : GULAG
The Gulag was a government agency in the Soviet Union that administered forced labor camps. The term “gulag” was used for the camps themselves, especially when used for political dissidents. “GULag” is actually an acronym for the Russian “Chief Administration of Corrective Labor Camps and Colonies”.

48. Cause for an R rating : GORE
The Motion Picture Association of America’s (MPAA) film-rating system (R, PG-17, G etc.) is purely voluntary and is not backed by any law. Movie theaters agree to abide by the rules that come with the MPAA ratings in exchange for access to new movies.

51. Barnyard male : TOM
A male turkey is called a “tom”, taking its name from a “tomcat”. The inference is that like a tomcat, the male turkey is relatively wild and undomesticated, sexually promiscuous and frequently getting into fights.