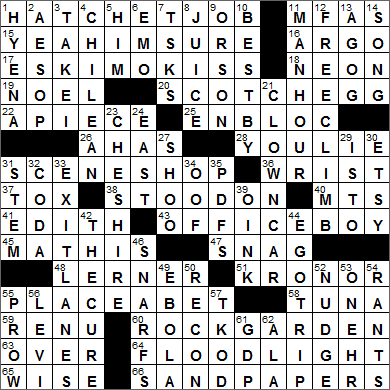 Museum docents are people who serve as guides for visitors to their institutions, usually providing their services for free. The term “docent” comes from the Latin “docere” meaning “to teach”.

16. 2012 political thriller : ARGO
“Argo” is a 2012 movie that is based on the true story of the rescue of six diplomats hiding out during the 1979 Iran hostage crisis. The film was directed by and stars Ben Affleck and is produced by Grant Heslov and George Clooney, the same pair who produced the excellent “Good Night, and Good Luck”. I saw “Argo” recently and recommend it highly, although I found the scenes of religious fervor pretty frightening …

17. Touching of noses : ESKIMO KISS
What we call an “eskimo kiss” is a pressing of one’s nose against the nose of another. The practice is based on a traditional Inuit greeting known as a “kunik”. A kunik is an intimate expression of affection involving the pressing of the tip of the nose and the upper lip against the cheek or the forehead of a loved one. While touching the other person’s skin, person giving the kunik breathes in, causing a gentle suction bond between the two.

18. Like some Crayola crayons : NEON
In the year 2000 the Crayola company, very cleverly I think, held the “Crayola Color Census 2000” in which people were polled and asked for their favorite Crayola colors. President George W. Bush chose “Blue Bell” and Tiger Woods chose “Wild Strawberry”.

19. “O Sanctissima,” e.g. : NOEL
“Noël” is the French word for the Christmas season, ultimately coming from the Latin word for “birth” (natalis). Noel has come to be used as an alternative name for a Christmas carol.

“O Sanctissima” is a Roman Catholic hymn that praises the Virgin Mary, with words in Latin. The same tune is used with different words in English, as a Christmas Carol. There is also an arrangement by Ludwig van Beethoven that is well-known as a Christmas carol in German, called “O du fröhliche”.

20. Deep-fried pub dish : SCOTCH EGG
I used to love Scotch eggs when I was a student, great food with a pint or two of beer. A Scotch egg is made from a hard-boiled egg that is wrapped in sausage meat, coated in breadcrumbs and then deep-fried. We hadn’t heard of cholesterol in those days …

45. “It’s Not for Me to Say” crooner : MATHIS
Johnny Mathis had to face a tough choice in 1956. Mathis was a talented high jumper in college and was invited to try out for the US Olympic team destined for the Melbourne Games. At the same time he was scheduled to make his first recordings, in New York. Mathis opted to go to the Big Apple.

48. “My Fair Lady” lyricist : LERNER
The George Bernard Shaw play “Pygmalion” was adapted by Lerner and Loewe to become the Broadway musical “My Fair Lady”. The musical spun off the wonderful 1964 film of the same name starring Audrey Hepburn and Rex Harrison. To cockney Eliza Doolittle, Professor Henry Higgins was “‘Enry ‘Iggins”.

51. Swedish coins : KRONOR
“Krona” translates in English as “crown”, and is the currency of Sweden. As a member of the European Union, Sweden is required to adopt the euro as its official currency. Such a move isn’t really popular in Sweden and so the Swedish government has been using a legal loophole to allow the country to retain the krona.

60. Form of xeriscaping : ROCK GARDEN
“Xeriscaping” is landscaping that reduces or eliminates the need for irrigation, i.e. drought-tolerant landscaping. The adjective “xeric” means “adapted to a dry environment”.

Down
1. Member of a den : HYENA
Hyenas have the reputation of being cowardly scavengers. That said, the spotted hyena that lives in Sub-Saharan Africa actually kills about 95% of its food and a pack of spotted hyenas are capable of driving off leopards or lionesses before they can consume their kill.

2. “Slow and steady wins the race” source : AESOP
“The Tortoise and the Hare” is perhaps the most famous fable attributed to Aesop. The cocky hare takes a nap during a race against the tortoise, and the tortoise sneaks past the finish line for the win while his speedier friend is sleeping.

3. “To the Stars” autobiographer : TAKEI
George Takei played Mr. Sulu, the helmsman in the original “Star Trek” series. Takei has played lots of roles over the years and is still very active in television. Did you know that he appeared in the 1963 film about President Kennedy’s WWII career called “PT-109”? Not only did Takei play the helmsman on the Starship Enterprise, he played the helmsman steering the Japanese destroyer that ran down John F. Kennedy’s motor torpedo boat.

6. Overly sensitive, informally : EMO
The musical genre of “emo” originated in Washington D.C. in the 80s, and takes its name from “emotional hardcore”. Not my cup of tea …

9. Mork’s supervisor on “Mork & Mindy” : ORSON
“Mork & Mindy” is a sitcom that originally aired from 1978 to 1982. The title characters were played by Robin Williams and Pam Dawber. Mork is an alien from the planet Ork who reports back to his superior called Orson. Orson is played by voice actor Ralph James. Ralph James was also known for providing the voice of Mr Turtle in famous Tootsie Pop commercials in the seventies.

23. County of Lewis Carroll’s birth : CHESHIRE
Lewis Carrollwas the pen name of Charles Lutwidge Dodgson. He was born in 1832 in the village of Daresbury near Warrington in the county of Cheshire, in the northwest of England. And, let’s not forget one of Carroll’s most beloved characters, the Cheshire Cat.

24. One side in the annual Shrine Game : EAST
The East-West Shrine Game is a college football all-star game played every January. The event is sponsored by the Nobles of the Mystic Shrine (“the Shriners”) and proceeds go the Shriners’ charitable causes.

The Shriners are an offshoot of the Freemasons. One of the founders was Walter Fleming, who picked up the idea of creating a group with a Middle Eastern theme after witnessing an Arabian musical comedy in Southern France and again in North Africa. He gave the group its name, the Ancient Order of the Nobles of the Mystic Shrine, or Shriners for short.

30. Modern collection of vendors : ETSY
Etsy.com is an e-commerce website where you can buy and sell the kind of items that you might find at a craft fair.

31. ___ fields : STEM
The acronym STEM stands for the disciplines of science, technology, engineering and mathematics. An alternative acronym with a similar meaning is MINT, standing for mathematics, information sciences, natural sciences and technology.

32. Led Zeppelin’s final studio album, appropriately : CODA
In music, a coda is primarily a passage that brings a movement to a conclusion. “Coda” is Italian for “tail”.

35. Some email attachments : PDFS
Portable Document Format (PDF) is a file format introduced by Adobe Systems in 1993. PDF documents can be shared between users and read using many different applications, making them more universally accessible than documents saved by one particular program.

49. What fruit bats can carry : EBOLA
The Ebola virus causes a very nasty form of hemorrhagic fever. The name of the virus comes from the site of the first known outbreak, in a mission hospital in the Ebola River Valley in the Democratic Republic of the Congo. The disease is transmitted from human to human by exposure to bodily fluids. In nature, the main carrier of Ebola is the fruit bat.

54. Philippics : RANTS
A philippic is a damning speech designed to bring down a politician. The “original” philippic was delivered in the 4th century BCE by the Greek statesman Demosthenes, and was an attack on Philip II of Macedon, hence the name.

56. Founder of one of the 12 tribes of Israel : LEVI
In the Torah, the Israelites are traced back to Jacob, the grandson of Abraham. Jacob had twelve sons, six with each of his concurrent wives Leah and Rachel. The sons became the ancestors of the Twelve Tribes of Israel. The sons were:

57. Having thrown in the towel, maybe : TKOD
In boxing, a knockout (KO) is when one of the fighters can’t get up from the canvas within a specified time, usually 10 seconds. This can be due to fatigue, injury, or the participant may be truly “knocked out”. A referee, fighter or doctor may also decide to stop a fight without a physical knockout, especially if there is concern about a fighter’s safety. In this case the bout is said to end with a technical knockout (TKO).

61. Natl. figure : GDP
A country’s Gross National Product (GNP) is the value of all services and products produced by its residents in a particular year. GNP includes all production wherever it is in the world, as long as the business is owned by residents of the country concerned. Gross Domestic Product (GDP) is different, although related, and is the value of all services and goods produced within the borders of the country for that year.