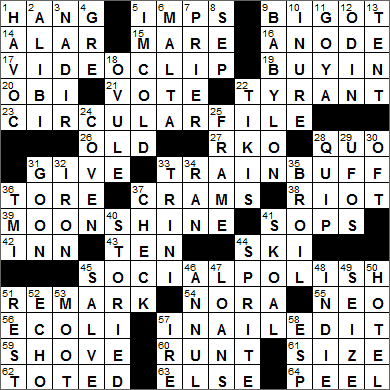 CROSSWORD SETTER: Jennifer Nutt
THEME: I Nailed It! … the last words of today’s themed answers give us a sequence of steps one might take in manicuring nails:

57A. Appropriate exclamation upon solving this puzzle? : I NAILED IT!

17A. Excerpt shown on TV : VIDEO CLIP
23A. Wastebasket, jocularly : CIRCULAR FILE
33A. Visitor at a railroad museum, say : TRAIN BUFF
39A. Product of a backwoods still : MOONSHINE
45A. What a boor sorely lacks : SOCIAL POLISH

Today’s Wiki-est, Amazonian Googlies
Across
9. Prejudiced person : BIGOT
“Bigot” is a French word that back in the late 1500s meant “sanctimonious person, religious hypocrite”. We use the term today to describe someone who is biased towards his or her own group, and who is intolerant of those outside of that group.

14. Banned apple spray : ALAR
The chemical name for Alar, a plant growth regulator and color enhancer, is daminozide. Alar was primarily used on apples but was withdrawn from the market when it was linked to cancer.

15. Horse with a foal : MARE
There are lots of terms to describe horses of different ages and sexes, it seems:

16. One end of a battery : ANODE
A battery is a device that converts chemical energy into electric energy. A simple battery is made up of three parts: a cathode, an anode and a liquid electrolyte. Ions from the electrolyte react chemically with the material in the anode producing a compound and releasing electrons. At the same time, the electrolyte reacts with the material in the cathode, absorbing electrons and producing a different chemical compound. In this way, there is a buildup of electrons at the anode and a deficit of electrons at the cathode. When a connection (wire, say) is made between the cathode and anode, electrons flow through the resulting circuit from the anode to cathode in an attempt to rectify the electron imbalance.

20. Kimono sash : OBI
The sash worn as part of traditional Japanese dress is known as an obi. The obi can be tied in what is called a butterfly knot.

27. One of the Big Five movie studios, once : RKO
The RKO Pictures studio was formed when RCA (RADIO Corporation of America) bought the KEITH-Albee-ORPHEUM theaters (and Joe Kennedy’s Film Booking Offices of America). The RKO initialism then comes from the words “Radio”, “Keith” and “Orpheum”.

28. Status ___ : QUO
“Status quo” translates from Latin as “state in which”, and in English is used to mean the existing condition or state of affairs.

33. Visitor at a railroad museum, say : TRAIN BUFF
A “buff” or a “nut” is one who is extremely enthusiastic and knowledgeable about a subject.

41. Chunks of bread for stew, e.g. : SOPS
Cerberus is a dog with three heads that appears in both Greek and Roman mythology. Cerberus had the job of guarding the gates of Hades and preventing those who had crossed the River Styx from ever escaping. A sop is a piece of food that has been dipped in some liquid, as one might sop a piece of bread in soup. There is an idiomatic expression, “to give a sop to Cerberus”, which means to give someone a bribe, or pay someone off. The idea is that if one could bribe Cerberus, give him a sop to eat, then he would let you pass and escape from Hades.

42. Holiday ___ : INN
The first Holiday Inn hotel was opened in 1952. The name for the hotel chain was inspired by the 1942 movie “Holiday Inn” starring Bing Crosby and Fred Astaire.

54. Writer Ephron : NORA
Nora Ephron had many talents, including writing film scripts and novels. Many of the movies that she wrote, she also directed. These would include some of my favorite movies of all time like “Sleepless in Seattle”, “You’ve Got Mail” and most recently, the wonderful “Julie & Julia”. And, did you know that Nora Ephron’s second marriage was to journalist Carl Bernstein of Watergate fame? She wrote an autobiographical novel based on her life with Bernstein, dealing in particular with Bernstein’s affair with the daughter of British Prime Minister James Callaghan.

56. Intestinal bug : E COLI
Escherichia coli (E. coli) are usually harmless bacteria found in the human gut, working away quite happily. However, there are some strains that can produce lethal toxins. These strains can make their way into the food chain from animal fecal matter that comes into contact with food designated for human consumption.

60. Peewee pup : RUNT
Back around 1500. a runt was an old or decayed tree stump, and by the early 1600s “runt” was being used to describe animals that were similarly old and decayed. Ultimately “runt” came to mean the smallest and often sickest in a litter.

62. Schlepped : TOTED
Our word “schlep” means “to carry, drag”. As one might expect, “schlep” comes from Yiddish, with “shlepen” having the same meaning.

Down
1. Mayhem : HAVOC
“Havoc” is a great damage or destruction. The term comes from the Anglo-French phrase “crier havok”, which was an order given in the late 1500s to soldier instructing them to seize plunder.

2. Proof you weren’t anywhere near the murder : ALIBI
“Alibi” is the Latin word for “elsewhere” as in, “I claim that I was ‘elsewhere’ when the crime was committed … I have an ‘alibi'”.

4. Coll. senior’s test : GRE
Passing the Graduate Record Examination (GRE) is usually a requirement for entry into graduate school here in the US.

6. Island nation for which a distinctive cat is named : MALTA
The island state of Malta is relatively small, but its large number of inhabitants makes it one of the most densely populated countries in Europe. Malta’s strategic location has made it a prized possession for the conquering empires of the world. Most recently it was part of the British Empire and was an important fleet headquarters. Malta played a crucial role for the Allies during WWII as it was located very close to the Axis shipping lanes in the Mediterranean. The Siege of Malta lasted from 1940 to 1942, a prolonged attack by the Italians and Germans on the RAF and Royal Navy, and the people of Malta. When the siege was lifted, King George VI awarded the George Cross to the people of Malta collectively in recognition of their heroism and devotion to the Allied cause. The George Cross can still be seen on the Maltese flag, even though Britain granted Malta independence in 1964.

The cat known as a “Maltese” is one with a fur that is primarily blue or gray, regardless of breed. Such coloring was prevalent in cats on the island of Malta, hence the name.

8. Follower of Aug. : SEP
The month of September is the ninth month in our year, although the name “September” comes from the Latin word “septum” meaning “seventh”. September was the seventh month in the Roman calendar until the year 46 BC when Julius Caesar introduced the Julian calendar. The Julian system moved the start of the year from March 1st to January 1st, and shifted September to the ninth month. The Gregorian calendar that we use today was introduced in 1582.

9. Ancient Hanging Gardens city : BABYLON
The Hanging Gardens of Babylon were one of the Seven Wonders of the Ancient World. Unlike the other “Wonders”, the Hanging Gardens may only have existed in legend. The Gardens were supposedly constructed in Babylon by King Nebuchadnezzar II for his wife Amytis. Amytis was from Media and she was homesick, so her husband created an elaborate garden in Babylon that was replete with plants from homeland.

11. “The Naked Maja” painter : GOYA
Francisco Goya was a Spanish painter, often called the last of the Old Masters and the first of the moderns. Two of Goya’s most famous works are “The Nude Maja” and “The Clothed Maja”.

12. Thor’s father : ODIN
In Norse mythology, Odin was the chief of the gods. Odin’s wife Frigg was the queen of Asgard whose name gave us our English term “Friday” (via Anglo-Saxon). Odin’s son was Thor, and his name gave us the term “Thursday”. Odin himself gave us our word “Wednesday”, from “Wodin”, the English form of his name.

22. Polynesian carvings : TIKIS
A tiki is a large carving of wood or stone resembling a human form, found in Polynesian cultures. The carvings often mark out boundaries of sites sacred to the locals.

24. Witches’ gathering : COVEN
“Coven” is an old Scottish word meaning simply “gathering”. The first known application of the word to witchcraft came during the trial of a Scotswoman in 1662 accused of being a witch. At that time, “coven” came to mean a group of 13 witches.

29. Subjects of a top-secret government cover-up, some believe : UFOS
In 1952, the USAF revived its studies of reported sightings of unidentified flying objects (UFOs) in a program called Project Blue Book. Project Blue Book ran from 1952 until it was shut down in 1969 with the conclusion that there was no threat to national security and that there were no sightings that could not be explained within the bounds of modern scientific knowledge.

“If I Had a Hammer” is a song written in 1949 by Pete Seeger and Lee Hays. The song has been released by many artists, but my guess would be that the most famous recording was by Peter, Paul and Mary in 1962.

44. Mountain Dew alternative : SPRITE
Sprite is Coca-Cola’s answer to the very successful soft drink called 7 Up. Sprite was introduced in 1961, and Coca-Cola used its muscle to topple 7 Up from its dominant position in the market. Sprite has been the number-one selling lemon soda since 1978.

48. Any movie at the Sundance Film Festival : INDIE
The Sundance film festival is the largest independent film event in the country, and takes place every year around the Sundance Resort near Provo, Utah. The festival has its roots in the Utah/US Film Festival which started in Salt Lake City in 1978. Management of the festival was taken over by Robert Redford’s Sundance Institute in 1985. The festival has became a bit of a media feeding frenzy in recent years, as a lot of A-list celebrities attend. The Festival organizers introduced a “Focus on Film” campaign in 2007 to try to offset some of the madness.

50. Four houses + 1 in Monopoly : HOTEL
In the game of Monopoly, one can purchase a hotel by “demolishing” four houses and by paying an extra amount equal to the price of a house.