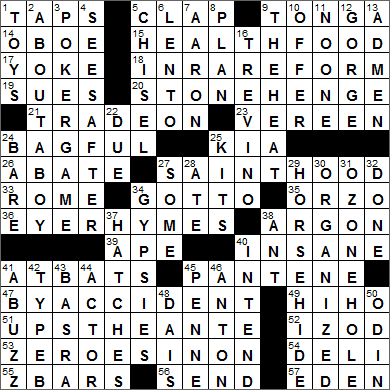 Today’s Wiki-est, Amazonian Googlies
Across
1. Call in the evening : TAPS
“Taps” is played nightly by the US military, indicating “lights out”. It’s also known as “Butterfield’s Lullaby” as it is a variation of an older bugle call named the “Scott Tattoo”, arranged during the Civil War by the Union Army’s Brigadier General Daniel Butterfield. The tune is called “taps”, from the notion of drum taps, as it was originally played on a drum, and only later on a bugle. The whole tune comprises just 24 notes, with there only being four different notes within the 24 i.e. “low G”, C, E and “high G”. Minimalism at its best …

9. Island group near Fiji : TONGA
The Kingdom of Tonga is made up of 176 islands in the South Pacific, 52 of which are inhabited and scattered over an area of 270,000 square miles. Tonga was given the name Friendly Islands in 1773 when Captain James Cook first landed there, a reference to the warm reception given to the visitors.

14. Heckelphone lookalike : OBOE
A heckelphone is a musical instrument like an oboe, but pitched an octave lower. The heckelphone was invented in 1904 by a manufacturer of woodwind instruments in Germany called Wilhelm Heckel.

17. For which two heads are better than one? : YOKE
A yoke is a wooden beam used between a pair of oxen so that they are forced to work together.

20. Site of an annual British music festival : STONEHENGE
The magnificent Stonehenge monument in the south of England was built from 3000 to 2000 BC. “Stonehenge” has given its name to “henges”, a whole class of earthenwork monuments that are circular in form with an internal ditch surrounded by a bank. Paradoxically, Stonehenge doesn’t qualify as a henge by this contemporary definition, as its earthen bank is surrounded by an external ditch.

23. Ben who played the Wizard in “Wicked” : VEREEN
Ben Vereen is an American actor and dancer who is probably best known for playing Chicken George in the magnificent television miniseries “Roots”. When he was applying for a passport in the sixties, Vereen discovered that he was adopted. He then went looking for his birth parents and identified his birth mother (who had passed away by this time). She went away on a trip when Ben was very young only to return and find that her child and the person minding him had disappeared. She never saw her son again.

25. Soul producer : KIA
The Kia Soul is a compact car produced in South Korea, although it was designed by Kia here in Irvine, California. Yep, the Kia Soul is from Seoul …

27. Judas never attained it : SAINTHOOD
Judas Iscariot was one of the twelve original apostles who studied with Jesus. Famously, it was Judas who betrayed Jesus for thirty pieces of silver, a transaction that led to the Crucifixion and Resurrection.

35. Pasta option : ORZO
Orzo is pasta that has been formed into granular shapes, much like barley. And indeed, “orzo” is the Italian word for “barley”.

36. Four-hour tour features? : EYE RHYMES
Sight rhymes (also “eye rhymes”) are words that share the same spelling at the end of a word, but not the same sound. Examples are “four”, “hour” and “tour”.

38. Roughly 1% of the earth’s atmosphere : ARGON
The chemical element argon has the symbol Ar. Argon is a noble gas, and so by definition is relatively nonreactive. The name “argon” comes from the Greek word for “lazy, inactive”. There’s a lot of argon around, as it is the third-most abundant gas in our atmosphere.

49. Bygone cracker brand : HI-HO
Sunshine Biscuits was an independent producer of cookies and crackers which produced Hi-Ho crackers in competition with the successful Ritz brand. In 1996, Sunshine was absorbed by the Keebler Company and Hi-Ho Crackers was on the list of brands that was discontinued because of the merger.

52. Maker of PerformX sportswear : IZOD
Jack Izod was a tailor of some repute over in England, producing shirts for King George V as well as other members of the Royal Family. As Izod was about to retire, he was approached for the use of his name by an American clothing manufacturer based in New York. The brand Izod of London was introduced to America in 1938.

56. “You ___ Me” (1957 R&B hit) : SEND
“You Send Me” is a 1957 song written and recorded by Sam Cooke, his debut single. “You Send Me” was originally released as the B-side to a recording by Cooke of “Summertime” from George Gershwin’s opera “Porgy and Bess”. The B-side turned out to be more popular with disk jockeys, and so the subsequent releases had the A-side and B-side designations switched.

57. Fall location : EDEN
In the Christian tradition, the “fall of man” took place in the Garden of Eden when Adam and Eve succumbed to the temptation of eating from the tree of knowledge of good and evil, against the bidding of God. As a result, Adam and Eve were banished from Eden to prevent them becoming immortal by eating from the tree of life. The first humans had transitioned from a state of innocent obedience to a state of guilty disobedience.

Down
2. 1998 coming-of-age novel by Nick Hornby : ABOUT A BOY
The English author Nick Hornby wrote three novels that were adapted into successful movies, namely “High Fidelity”, “About a Boy” and “Fever Pitch”.

3. Oscar Madison’s weekly event : POKER GAME
“The Odd Couple” is a play by the wonderfully talented Neil Simon first performed on Broadway, in 1965. This great play was adapted for the big screen in 1968, famously starring Jack Lemmon (as Felix Unger, the neat-freak) and Walter Matthau (as Oscar Madison, the slob). The success of the play and the film gave rise to an excellent television sitcom that ran from 1970-1975, starring Tony Randall and Jack Klugman. In 1985, Neil Simon even went so far as to adapt the play for an all-female cast, renaming it “The Female Odd Couple”. I’d like to see that one …

5. Tool with a bezel : CHISEL
The bezel of a chisel is the sloping face of the tool.

6. How a nocturne is often played : LENTO
A lento passage is a piece of music that has a slow tempo.

A nocturne is a musical piece that is written to be evocative of the night.

16. British Open winner of 1971 and 1972 : TREVINO
Lee Trevino is an American golfer of Mexican descent, and so has the nicknames “The Merry Mex” and “Supermex”. He is well known for his great sense of humor and for playing pranks on the golf course. For many years, Trevino wore a Band-Aid on his arm while playing, covering the tattoo with the name of his ex-wife.

25. Baby foxes : KITS
A kit is a young mammal of several species, including the ferret and the fox. “Kit” is probably a shortened form of “kitten”.

29. Old baseball coverage? : HORSEHIDE
The official balls in the sport of baseball were traditionally covered by horsehide. The covering was switched to cowhide in 1974.

30. In a union : ORGANIZED
Workers in a trade union are said to be organized.

31. Atmospheric problem : OZONE HOLE
Chlorofluorocarbons (CFCs) are the propellants that were once used in aerosols. CFCs make their way up into the ozone layer and trigger a chain reaction that converts ozone (O3) into regular oxygen (O2). That conversion creates “holes” in the ozone layer. Regular O2 is good stuff, but we need O3 to absorb harmful UV radiation raining down on us. CFC is not good stuff …

The Montreal Protocol is an international treaty designed to phase out production of chemicals that deplete the ozone layer of the atmosphere. The protocol is actually a great example of international cooperation actually achieving something. The ozone hole over Antarctica is recovering and the levels of ozone are expected to return to 1980 levels in fifty years or so.

38. Word with carpenter or weaver : ANT
Carpenter ants can wreak havoc in a wooden structure. They burrow into damp wood creating galleries and pathways that form a complex network of nests. Unlike termites though, carpenter ants don’t feed on the wood.

Weaver ants can be found in extremely large colonies consisting of perhaps more than a hundred nests. A colony can consist of over half a million workers. Weaver ants are very territorial and defend their territories aggressively. It is not unknown for farmers in southeast Asia to use weaver ants to control agricultural pests.

42. Easygoing : TYPE B
The Type A and Type B personality theory originated in the fifties. Back then, individuals were labelled as Type A in order to emphasize a perceived increased risk of heart disease. Type A personality types are so called “stress junkies”, whereas Type B types are relaxed and laid back. But there doesn’t seem to be much scientific evidence to support the linkage between the Type A personality and heart problems.

43. Arabian port that’s home to Sinbad Island : BASRA
It’s quite a coincidence that the Iraqi city of Basra has a name that is an anagram of “Arabs”, isn’t it? Basra also features in the H. G. Wells science-fiction tale “The Shape of Things to Come”. Written in 1933, the storyline predicts a global conflict (WWII) that breaks out in 1940 lasting for ten years, after which chaos reigns as no victor emerges. Following worldwide plague, a benevolent dictatorship takes charge and the world moves towards a serene utopia. In time, the dictators are overthrown and peacefully retired, and the people of the Earth live happily ever after, all citizens of one global state with its capital in Basra in the Middle East.

45. Pasta option : PENNE
Cylindrical pasta is known in general as “penne”, and there are many variants. For example, ziti is a particularly large and long tube with square-cut ends. “Penne” is the plural of “penna”, the Italian for “feather, quill”.

46. ___ Chigurh (“No Country for Old Men” villain) : ANTON
“No Country for Old Men” is a 2007 thriller made by the Coen brothers that is based on a novel of the same name by Cormac McCarthy. I have to put this one on my list as I hear good things about it. It won several Oscars and stars Tommy Lee Jones, a favorite actor of mine.

48. Lectern locale : DAIS
Ultimately our word “dais”, meaning “raised platform for a speaker”, comes from the Latin “discus” meaning a “disk-shaped object”. I guess that many a dais was disc-shaped …

50. Figure in the Ynglinga saga : ODIN
In Norse mythology, Odin was the chief of the gods. Odin’s wife Frigg was the queen of Asgard whose name gave us our English term “Friday” (via Anglo-Saxon). Odin’s son was Thor, and his name gave us the term “Thursday”. Odin himself gave us our word “Wednesday”, from “Wodin”, the English form of his name.

Ynglinga saga is an Old Norse saga written in 1225 by the Icelandic poet Snorri Sturluson. The work tells the history of the Norwegian kings from the age of mythical prehistory until the 12th century.