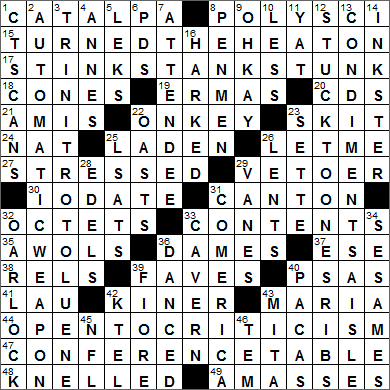 Today’s Wiki-est, Amazonian Googlies
Across
1. Tree with white flowers : CATALPA
The catalpa tree is particularly prized by fisherman, as the leaves are eaten by the caterpillars of the catalpa sphinx moth. They make such good bait that some anglers plant catalpa trees just to source the caterpillars.

8. Int’l relations is a branch of it : POLY SCI
I always thought that the accepted abbreviation for political science was “poli sci”, but I guess I’ve learned something new, yet again …

17. “The three words that best describe” the Grinch, in song : STINK, STANK, STUNK!

You’re a foul one, Mr. Grinch,
You’re a nasty wasty skunk,
Your heart is full of unwashed socks, your soul is full of gunk, Mr. Grinch,
The three words that best describe you are as follows, and I quote,
“Stink, stank, stunk”!

19. Gospel singer Franklin and others : ERMAS
Erma Franklin was an R&B and gospel singer. She was the elder sister of Aretha Franklin. Erma toured with Aretha for a while, and even recorded backup vocals on her sister’s big hit “Respect”.

20. Fidelity offerings, briefly : CDS
A certificate of deposit (CD) is like a less-flexible and higher-paying savings account. Instead of depositing money into a savings account and earning interest periodically, one can open a CD. With a CD one deposits a minimum amount of money but must leave it there for a specified length of time. In return for committing the funds for a fixed period, one is given a higher interest rate than a savings account and can redeem that interest and the initial deposit when the term has expired. CDs are relatively low-risk investments as they are FDIC insured, just like savings accounts.

21. French Facebookers’ connections : AMIS
A male friend in France is “un ami”, and a female friend is “une amie”.

24. Giant rival, for short : NAT
The Washington Nationals baseball team started out life as the Montreal Expos in 1969. The Expos moved to Washington in 2005 becoming the Nats. There are only two Major Leagues teams that have never played in a World Series, one being the Mariners and the other the Nats.

25. Like a U-Haul when you haul : LADEN
The U-Haul company was started by married couple Leonard Shoen and Anna Mary Carty in Ridgefield, Washington in 1945. The Shoens used $5,000 of seed money to build trailers in their garage, and then cleverly recruited gas station owners as franchisees with whom they would split the rental revenue. There are now about 15,000 U-Haul dealers across the country.

29. Executive using a check? : VETOER
“Veto” comes directly from Latin and means “I forbid”. The word was used by tribunes of Ancient Rome to indicate that they opposed measures passed by the Senate.

30. Disinfect, in a way, as a wound : IODATE
To iodate is to iodize, to apply iodine.

Tincture of iodine is a disinfectant. A “tincture” is a substance used in dyeing. Since the 1600s, “tincture” has also been used for a solution of medicine in an alcohol mixture.

32. Oxygen’s protons, neutrons and electrons : OCTETS
Oxygen was discovered in 1773 by Swedish Carl Wilhelm Scheele. English chemist Joseph Priestley made the same discovery independently the following year. Priestley was the first to publish his work and so usually gets the credit as for isolating the gas.

35. Subtractions from the division? : AWOLS
The Military Police (MPs) are concerned with personnel who go AWOL (Absent Without Leave).

37. Suffix with Taiwan : -ESE
The island of Taiwan is separated from the coast of mainland China by the Taiwan Strait. The East China Sea lies to the north, the Philippine Sea to the east, the Luzon Strait to the south and the South China Sea to the southwest.

41. Charley who caught Warren Spahn’s 1961 no-hitter : LAU
Charlie Lau played in the major leagues as a catcher, and later made a name for himself as a hitting coach. The Ted Williams book called “The Science of Hitting” was the “Bible of Batting” until Lau came out with “The Art of Hitting .300” in 1992.

42. Ralph of Cooperstown : KINER
Ralph Kiner is a former Major League Baseball player. Kiner has been calling the games for the New York Mets from the broadcast booth for decades now.

48. Slowly took its toll? : KNELLED
The word “knell” is used for a solemn ring from a bell, often associated with death or a funeral. “Knell” comes the Old English “cnell” and is probably imitative in origin, sounding like a peal from a large bell.

Down
1. Images of organs, often : CT SCANS
A CT (or “CAT”) scan produces (via computer manipulation) a three dimensional image of the inside of an object, usually the human body. It does so by taking a series of two dimensional x-ray images while rotating the camera around the patient.

3. Something to level with : TRINITROTOLUENE
TNT is an abbreviation for trinitrotoluene. Trinitrotoluene was first produced in 1863 by the German chemist Joseph Wilbrand, who developed it for use as a yellow dye. TNT is relatively difficult to detonate so it was on the market as a dye for some years before its more explosive properties were discovered.

4. Queen ___ Revenge (Blackbeard’s ship) : ANNE’S
Blackbeard the pirate was given the slave ship called La Concorde de Nantes in 1717 by his boss, the pirate Benjamin Hornigold. Blackbeard renamed the vessel Queen Anne’s Revenge, possibly as a nod to Queen Anne, the last Stuart monarch. Blackbeard lost the vessel off the coast of North Carolina less than a year later. The wreck of the Queen Anne’s Revenge was discovered in shallow water in 1996 and is still undergoing excavation.

5. Albanian cash : LEKS
The official currency of Albania is called the lek. The first lek was introduced in 1926, and was apparently named after Alexander the Great.

6. A.P.B. issuers : PDS
A police department (PD) might issue an All Points Bulletin (APB). An APB is a broadcast from one US law enforcement agency to another.

9. Gershwin musical whose name sounds like an approval : OH, KAY!
“Oh, Kay!” is a musical by George and Ira Gershwin that opened on Broadway in 1926. The most famous song from the show is “Someone to Watch Over Me”.

11. China’s Sun ___-sen : YAT
Sun Yat-sen is known as the “Father of the Nation” in China, and is uniquely revered in both the mainland of China and on the island of Taiwan. During his rule as president of the country he promoted his political philosophy known at the Three Principles of the People, namely nationalism, democracy and the people’s livelihood.

13. What may hold the mayo : CONDIMENTS AISLE
Mayonnaise originated in the town of Mahon in Menorca, a Mediterranean island belonging to Spain. The Spanish called the sauce “salsa mahonesa” after the town, and this morphed into the French word “mayonnaise” that we use in English today.

14. Juli who won the 1999 and 2000 L.P.G.A. Championship : INKSTER
Juli Inkster has played professional golf for over 27 years and ranks second in wins amongst all players active on the LPGA tour today. Inkster has played many times on the US team in the Solheim Cup (the women’s equivalent to the Ryder Cup), and has won more points for her team than any other American who has played in the competition.

16. Heeded a herald, say : HARKED
“Hark! The Herald Angels Sing” is one of my favorite Christmas carols. It was written in 1739 by Charles Wesley, although he scored it as a very slow and somber tune. A number of musicians modified the music over the years (including Felix Mendelssohn) giving us the more uplifting air that we know today.

22. Brewery equipment : OASTS
An oast is a kiln used for drying hops as part of the brewing process. Such a structure might also be called an “oast house”.

25. Future counselor’s challenges, for short : LSATS
The Law School Admission Test (LSAT) has been around since 1948.

26. Periods of forbearance : LENTS
In Latin, the Christian season that is now called Lent was termed “quadragesima” (meaning “fortieth”), a reference to the forty days that Jesus spent in the desert before beginning his public ministry. When the church began its move in the Middle Ages towards using the vernacular, the term “Lent” was introduced. “Lent” comes from “lenz”, the German word for “spring”.

31. Bank with a landmark tower in Dallas : COMERICA
Comerica is a retail bank and financial services company based in Dallas. Comerica was founded in 1849 as the Detroit Savings Fund Institute.

32. Rowboat feature : OARLOCK
Oarlock are swivelling braces on the sides of a rowing boat that hold the oars as the boat is being propelled. Back in Ireland, we call them “rowlocks” (pronounced “rollox”).

36. Twisted, e.g. : DANCED
The Twist is a dance that was born in the sixties, and was inspired by the Chubby Checker hit of 1960 called “The Twist”. Chubby Checker sang the song live in front of a crowd in Deland, Florida in October 2012. About 40,000 people danced along to the music, setting a new Guinness World Record for the most people “twisting” at the same time. Checker helped keep the dance craze going by releasing a follow-on hit “Let’s Twist Again” in 1961.

40. South American rodents : PACAS
There are two species of rodents called pacas, and both are found in Central and South America. In some parts, paca is considered a gourmet dish.

42. Label of the “Singing to the Hits” series : K-TEL
K-Tel was founded in 1962 in Winnipeg, Manitoba by one Philip Kives. K-Tel’s recipe for success was the sale of inexpensive goods with a simple sales pitch and mail-order distribution.

43. Former Xerox competitor : MITA
Mita was a Japanese photocopier manufacturer that was purchased by Kyocera in 2000.

45. Org. that ex-Pats have left : NFL
The New England Patriots football team was founded in 1959 as the Boston Patriots. The “Patriots” name was selected from suggestions made by football fans in Boston. The team played at several different stadiums in the Boston area for just over ten years, before moving to their current home base in Foxborough, Massachusetts. At the time of the move, the “Boston” name was dropped and changed to “New England”.

46. Pro ___ : TEM
“Pro tempore” can be abbreviated to “pro tem” or “p.t.” “Pro tempore” is a Latin phrase that best translates as “for the time being”. It is used to describe a person who is acting for another, usually a superior.