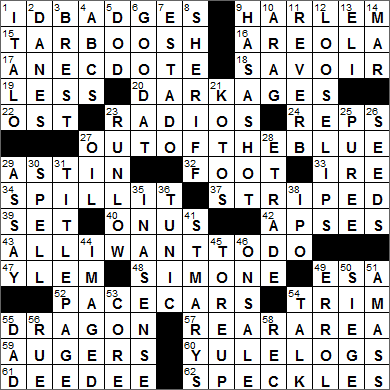 Today’s Wiki-est, Amazonian Googlies
Across
9. Apollo setting : HARLEM
The Apollo Theater in the Harlem district of Manhattan, New York was opened in 1914 as Hurtig & Seamon’s New Burlesque Theater. The original facility was a whites-only venue. When it was opened to African Americans in 1934, the name was changed to the Apollo.

15. Tasseled topper : TARBOOSH
“Tarboosh” is the Arabic name for the hat called a “fez” in Turkish.

17. Speech opener, often : ANECDOTE
An anecdote is a short account of an event, usually something amusing. The term ultimately derives from the Greek “anekdota” meaning “things unpublished”, or more literally “things not given out”.

18. To know, in Nantes : SAVOIR
Nantes is a beautiful city located on the delta of the Loire, Erdre and Sèvre rivers. It has the well deserved nickname of “The Venice of the West”. I had the privilege of visiting Nantes a couple of times on business, and I can attest that it really is a charming city.

20. Unenlightened stretch : DARK AGES
The “Dark Ages” was a term that used to be popular as a description of the period following the decline of the Roman Empire in Europe, the time after the “light of Rome” was extinguished. The Dark Ages were said to end with the rise of the Italian Renaissance in the 14th century. The Italian Renaissance was centered on the cities of Florence and Siena in Tuscany.

The German city of Dresden was almost completely destroyed during WWII, especially as a result of the famous firebombing of the city in 1945. Restoration work in the inner city in recent decades led to it being designated as a UNESCO World Heritage Site However, in 2006 when the city built a highway bridge close to the city center, UNESCO took Dresden off the list. This marked the only time a European location has lost World Heritage status.

24. Hill people, for short : REPS
Capitol Hill is home to the House of Representatives.

29. Sean of “The Lord of the Rings” : ASTIN
Sean Astin is best known for playing the title role in the 1993 film “Rudy” and the character Samwise Gamgee in the “Lord of the Rings” movies. You might also have seen him playing Lynn McGill in the 5th season of “24”. Astin is the son of actress Patty Duke.

42. Quartet in a cathedral, maybe : APSES
The apse of a church or cathedral is a semicircular recess in an outer wall, usually with a half-dome as a roof and often where there resides an altar. Originally apses were used as burial places for the clergy and also for storage of important relics.

43. 2008 crossover hit for the country duo Sugarland : ALL I WANT TO DO
The country music duo called Sugarland was formed in 2002 by Kristen Hall and Kristian Bush. The duo became a trio with the addition of lead singer Jennifer Nettles, and then a duo again after the departure of Kristen Hall.

47. Matter in the Big Bang theory : YLEM
Back in the 1940s, cosmologists George Gamow and Ralph Alpher used the term “ylem” to describe the primordial plasma that was presumed to exist right after the Big Bang.

According to the Big Bang theory, the universe came into being just under 14 billion years ago. The theory tells us that the universe started out as a hot and dense mass that began to expand rapidly (in a “big bang”). Within three minutes of the “bang”, the universe cooled so that energy was converted into subatomic particles like protons, electrons and neutrons. Over time, subatomic particles turned into atoms. Clouds of those atoms formed stars and galaxies.

49. Paraguayan pronoun : ESA
Paraguay is a landlocked country in South America that is bordered by Argentina, Brazil and Bolivia. Paraguay’s capital is Asunción, which is home to almost a third of the nation’s population.

59. Wood borers : AUGERS
An auger is a drill, a boring tool.

60. Holiday cakes with swirls : YULE LOGS
A Yule log is a large log made from a very hard wood that is burned as part of the Christmas celebration. There is a cake called a Yule log that is served at Christmas, especially in French-speaking parts of the world. The cake is made from sponge that is rolled up to resemble a wooden Yule log.

61. Myers of the Clinton White House : DEE DEE
Dee Dee Myers was a very capable White House Press Secretary in the first two years of the Clinton administration, the first woman to hold that post. After leaving the White House, Myers acted as a consultant on the TV show “The West Wing”, and I am sure helped add that touch of authenticity to a great television program.

62. Pointillism features : SPECKLES
Pointillism is a style of painting that grew out of Impressionism. The pointillist technique calls for the artist to use small, distinct dots of bold color to build up the image. Pointillism was developed in the late 1800s by the great French painter, Georges Seurat. You can go see his magnificent work “A Sunday Afternoon on the Island of La Grande Jatte” at The Art Institute of Chicago the next time you’re in town.

Down
1. ___-Abyssinian War : ITALO
The First Italo-Ethiopian War (also “First Italo-Abyssinian War) was fought between 1895 and 1896. Ethiopia wasn’t fighting alone as Russia and France provided material support against Italy. The end result was a victory for Ethiopia, a unique outcome. Never before had an African nation successfully resisted the colonial onslaught of a European nation. However, the Second Italo-Ethiopian War, fought thirty years later, resulted in the military occupation of Ethiopia by Italy and the formation of the colony of Italian East Africa.

2. Ninth-century invaders of East Anglia : DANES
East Anglia is a region in on the east coast of England, located to the immediate northeast of London. East Anglia is home to the famous university city of Cambridge.

3. Home to the marine megapark Océanopolis : BREST
Brest is a port city in northwest France, and is the second largest military port in the country. Brest was an important base for German U-boats during WWII when France was occupied by the Nazis. Brest is the most westerly city in the whole country.

5. Pentagon outfit, briefly : DOD
The incredible building known as the Pentagon was built during WWII, and dedicated on January 15, 1943. It is the largest office building in the world (by floor space) covering an area of about 6.5 million square feet. As it was built during the war years, a major requirement was that it use a minimum amount of steel. So the steel shortage dictated that the building be no more than four stories in height, covering an awful lot of real estate.

11. Addition to the mix : REVERB
When audio mixing in the process of sound recording, the sound engineer might add some reverb, a slight reverberation.

13. Reuner in New Haven : ELI
Eli is the nickname for a graduate of Yale University, a term used in honor of the Yale benefactor Elihu Yale.

21. Japanese zithers : KOTOS
The koto is a traditional stringed instrument, and the national musical instrument of Japan.

25. Strain to make? : PUREE
A “purée” is a food that has been made smooth by straining or blending. “Purée” is a French term, which I believe is now used to mean “pea soup” (more completely written as “purée de pois”). The French verb “purer” means “to strain, clean”, from the Latin “purare” meaning “to purify, clean”.

27. “The Starry Night,” e.g. : OIL
“The Starry Night” is a Van Gogh masterpiece depicting what the artist could see from the window of his room in a sanitarium near the village of Saint-Rémy-de-Provence. I am somewhat ashamed to note that one reason I know this painting so well is that I put together a 2,000-piece jigsaw puzzle last Christmas depicting “The Starry Night”.

28. Fidelity alternative : E*TRADE
E*Trade is mainly an online discount brokerage. It was founded in 1982 in Palo Alto, California, and I used to drive by its headquarters almost every day. The company is now run out of New York City. E*Trade produces those famous Super Bowl ads with the talking babies staring into a webcam.

30. One cast in a Harry Potter film : SPELL
The author of the amazingly successful “Harry Potter” series of books is J. K. Rowling. Rowling wrote the first book when she was living on welfare in Edinburgh in Scotland, and in longhand. She would often write in local cafes, largely because she needed to get her baby daughter out of the house (she was a single mom), and the youngster would tend to fall asleep on walks. Within five years, the single mom on welfare became a very rich woman, and is now worth about $1 billion!

31. Place for an imprint : TITLE PAGE
In the world of publishing, an imprint is a trade name used by the publisher. One publishing company might have more than one imprint. For example, Simon & Schuster have around 35 different imprints, including Howard Books and Scribner.

36. Viking garment : TUNIC
The Vikings were a Germanic people from northern Europe who were noted as great seafarers. Key to the success of the Vikings was the design of their famous “longships”. Made from wood, the longship was long and narrow with a shallow hull, It was also light, so that the crew would actually carry it small distances over land and around obstacles. Longships were designed to be propelled both by sail and by oars.

38. Big business news, for short : IPO
An Initial Public Offering (IPO) is the very first offer of stock for sale by a company on the open market. In other words, an IPO marks the first time that a company is traded on a public exchange. Companies have an IPO to raise capital to expand (usually).

41. River draining Lake Superior : ST MARYS
The St. Marys River drains Lake superior, running about 75 miles and emptying into Lake Huron. The whole length of the river forms a border between Michigan and Ontario. A famous spot along the river is the St. Marys Rapids, which is bypassed by the Soo Locks on the Sault Ste. Marie Canal.

50. Lengthy bout : SIEGE
Our word “siege” comes from a 13th century word for a “seat”. The military usage derives from the concept of a besieging force “sitting down” outside a fortress until it falls.