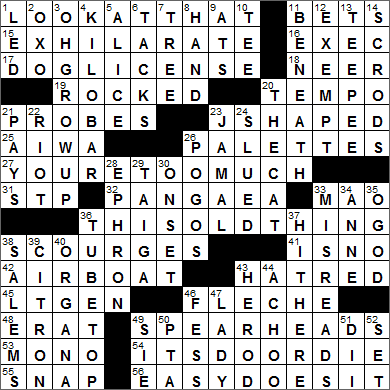 CROSSWORD SETTER: Kyle Mahowald
THEME: None
BILL BUTLER’S COMPLETION TIME: Did not finish!
ANSWERS I MISSED: Several in the top-right

Today’s Wiki-est, Amazonian Googlies
Across
18. When Romeo says he “saw true beauty” before seeing Juliet : NE’ER
Early in Shakespeare’s “Romeo and Juliet”, Romeo catches sight of Juliet for the first time. How about this for some complimentary words?

Oh, she shows the torches how to burn bright! She stands out against the darkness like a jeweled earring hanging against the cheek of an African. Her beauty is too good for this world; she’s too beautiful to die and be buried. She outshines the other women like a white dove in the middle of a flock of crows. When this dance is over, I’ll see where she stands, and then I’ll touch her hand with my rough and ugly one. Did my heart ever love anyone before this moment? My eyes were liars, then, because I never saw true beauty before tonight.

21. The Mariners, e.g. : PROBES
NASA’s Mariner program was a series of probes launched into space to investigate Mars, Venus and Mercury. There were ten Mariner probes launched in all (three were lost, though), and Mariner 11 and 12 evolved into the Voyager 1 and 2 spacecraft.

The Pep Boys automotive stores started out in Philadelphia when four friends pooled their money ($800, in 1921) to open an auto parts store. The name “Pep” was taken from a Pep Valve grinding compound that they carried. They changed the name to Pep Boys as at least one local used to refer to the store as “the boys at Pep”. One of the friends cashed out of the business, and the remaining trio eventually rebranded the store as “The Pep Boys – Manny, Moe & Jack”.

32. It underwent a long, massive breakup : PANGAEA
Pangaea was a supercontinent that existed during the age of the dinosaurs, the late Paleozoic and early Mesozoic eras. Pangaea broke apart due to movement of tectonic plates in the Earth’s crust. All of today’s continents were once part of Pangaea.

33. Leader who said “It is right to rebel” : MAO
Chairman Mao used the phrase at least twice:

38. Burmese pythons in the Everglades, e.g. : SCOURGES
Burmese pythons are huge snakes that are native to Southeast Asia, as the name suggests. However, Burmese pythons started to be spotted in the wild in South Florida starting in the 1980s. The speculation is that the first of the creatures set up home in the Everglades when pet owners released them illegally, finding the Burmese python just too much to take care of at home. Now there may be as many as 300,000 in the state.

42. Everglades transport : AIRBOAT
An airboat is a boat with a flat bottom and aircraft type propeller on the stern that provides forward motion. The propeller is often connected to a small aircraft engine. Believe it or not, the first airboat was built in 1905 by a team led by Alexander Graham Bell, who famously invented the first practical telephone.

The Everglades are a tropical wetlands that cover much of southern Florida. The area was named “River Glades” by a British surveyor in 1773, and is suggested that poor transcription of the word “river” led to the use of “ever”. The southern 20% of the Everglades is a protected region that we know as Everglades National Park. The park is the third largest National Park in the lower 48 states, after Death Valley NP (the largest) and Yellowstone NP.

43. “A sentiment appropriate to the occasion of another’s superiority,” per Ambrose Bierce : HATRED
Ambrose Bierce was, among other things, an American satirist. He wrote a satirical lexicon called “The Devil’s Dictionary” published in 1911. The book is still popular today, with an updated version released in 2009. It includes “new” definitions from Bierce that were not included in his original work. Roy Morris, Jr. wrote a biography about Bierce called “Ambrose Bierce: Alone in Bad Company”.

45. Geo. Washington was the U.S.’s first : LT GEN
Historically, the rank of lieutenant general was subordinate to a captain general. The latter was in command on the battlefield, and the former was his “lieutenant”, his second in command.

46. Fencing move that means “arrow” in French : FLECHE
In the sport of fencing, the “flèche” is a surprise move in which the attacker makes a fast, exaggerated walking stride with the weapon thrust forward. The move is so dramatic and with such momentum that the only choice is to continue moving past the opponent if the attack i unsuccessful. The term “flèche” is French for “arrow”, reflecting the element of surprise and speed of the forward motion.

48. Sic ___ scriptum : ERAT
“Sic” indicates that a quotation is written as originally found, perhaps including a typo. “Sic” is Latin for “thus, like this”. The term is more completely written as “sic erat scriptum”, which translates as “thus was it written”.

53. Source of some fevers : MONO
Mononucleosis is a viral disease that is also simply “Mono” or glandular fever. The virus that causes the disease can only be contracted through direct exposure to infected saliva. As a result, Mono is often called “the kissing disease”.

Down
2. Brand name chosen for its symmetry : OXO
The OXO line of kitchen utensils is designed to be ergonomically superior to the average kitchen too. The intended user of OXO products is someone who doesn’t have the normal range of motion or strength in the hands e.g. someone suffering from arthritis.

3. Response to a puerile joke : OH GROW UP!
Something described as “puerile” is foolishly childish or immature. The term comes from the Latin “puer” meaning “boy”.

6. Changes course : TACKS
“To tack” is a sailing term, meaning to veer into and through the wind in order change course, resulting in the wind coming over the opposite side of the vessel after the tack is completed.

8. Straight, say : HAND
The poker hand known as a straight contains five cards in a numerical sequence, with at least two different suits. If the cards are all in the same suit, the hand is called a straight flush.

13. Mobile home : TEEPEE
A tepee (also written as “tipi” and “teepee”) is a cone-shaped tent traditionally made from animal hides that is used by the Great Plains Native Americans. A wigwam is a completely different structure and is often a misnomer for a tepee. A wigwam is a domed structure built by Native Americans in the West and Southwest, intended to be a more permanent dwelling. The wigwam can also be covered with hides but more often was covered with grass, reeds, brush or cloth.

14. New England delicacies : SCRODS
Scrod is the name given to fish that has been “scrawed” i.e. split open, dried and then broiled.

20. 1960s Robert Loggia series about a burglar-turned-bodyguard : THE CAT
“T.H.E. Cat” is an action series that originally aired in the mid-sixties, starring Robert Loggia as the title character. The title comes from the Loggia’s full name in the show: Thomas Hewitt Edward Cat. Loggia plays a professional bodyguard who was once a cat burglar.

23. Crawford who won the 2014 Sixth Man of the Year Award : JAMAL
Jamal Crawford is an NBA basketball player from Seattle. Crawford generally plays as a shooting guard, and sometimes plays point guard.

The NBA’s Sixth Man of the Year Award has been presented since 1983. It is awarded to the league’s best performing “sixth man”, the player who comes off the bench as a substitute.

26. Dances by jumping in place : POGOS
The pogo is a dance in which the dancers jump and down with a stiff torse, resembling the use of a pogo stick. Most pogo dancers are into punk rock, I am reliably informed …

28. Screenwriter who knew the identity of Deep Throat before it was made public : EPHRON
Nora Ephron had many talents, including writing film scripts and novels. Many of the movies that she wrote, she also directed. These would include some of my favorite movies of all time like “Sleepless in Seattle”, “You’ve Got Mail” and most recently, the wonderful “Julie & Julia”. And, did you know that Nora Ephron’s second marriage was to journalist Carl Bernstein of Watergate fame? She wrote an autobiographical novel based on her life with Bernstein,
dealing in particular with Bernstein’s affair with the daughter of British Prime Minister James Callaghan.

Mark Felt was the Associate Director of the FBI during the Watergate scandal of the early seventies. Felt was also the secret informant who provided secret information to Bob Woodward and Carl Bernstein of “The Washington Post”, who broke the story. Felt was given the pseudonym “Deep Throat” by the newspaper’s managing editor, and was a reference to the “deep” background information that was provided and was a play on the “Deep Throat” pornographic film that was released in 1972. To their credit, Woodward and Bernstein refused to reveal the identity of Deep Throat for almost three decades. It was Felt who actually gave up his name to the public, in 2005, after which Woodward and Bernstein confirmed the facts.

29. Region between the tundra and steppes : TAIGA
The word “taiga” comes from Mongolian and is the name of an ecosystem or biome that exists in northern regions around the world, largely covered in coniferous forests. “Taiga” is sometimes used interchangeably with “Boreal Forest”.

A steppe is a grassland, devoid of trees apart from those growing near rivers and lakes. We would likely call such a geographic feature a prairie in this country.

34. Colonial heretic Hutchinson : ANNE
Anne Hutchinson arrived in Boston from England in 1634, along with her husband and ten surviving children (five others had died). Anne and her family became members of the Boston church, but soon her religious views diverged from the church leaders. She became a major contributor to the religious tension in the colony that became known as the Antinomian or Free Grace Controversy. The leader of the free grace movement was Puritan minister John Cotton, with Anne Hutchinson being his most charismatic preacher.

38. Alternative to Camels : SALEMS
The Salem brand was introduced in 1956 as the first filter-tipped menthol cigarette. Salem is an R. J. Reynolds brand, and along with the Winston brand, is named for the city of Winston-Salem, North Carolina, where R. J. Reynolds is headquartered.

39. Fruit historically used for medicinal purposes : CITRON
Most of our citrus fruits are hybrids of four original fruits. These are the pummelo, the mandarin, the papeda and the citron.

40. “Star Wars” surname : ORGANA
The full name of the character played by Carrie Fisher in the “Star Wars” series of films is Princess Leia Organa of Alderaan, and later Leia Organa Solo. Leia is the twin sister of Luke Skywalker, and the daughter of Anakin Skywalker (aka Darth Vader) and Padmé Amidala. Leia is raised by her adoptive parents Bail and Breha Organa. She eventually marries Han Solo.

43. Villain in a Nativity play : HEROD
Herod Agrippa was the grandson of Herod the Great, and like his grandfather was a Roman client king of Judea. It is thought that Herod Agrippa is the “Herod” mentioned in the Bible’s “Acts of the Apostles”, the king who imprisoned Peter and who had killed James son of Zebedee. Agrippa’s grandfather was the King Herod who ordered the Massacre of the Innocents described in the Gospel of Matthew. This was Herod’s attempt to kill the young Jesus by ordering the murder of all boys aged two or younger in Bethlehem and vicinity.

46. Talk, with “up” : FESS
The term “fess” is most often seen as part of the phrasal verb “to fess up” meaning “to admit to something”. “Fess” is simply a shortened form of “confess”.