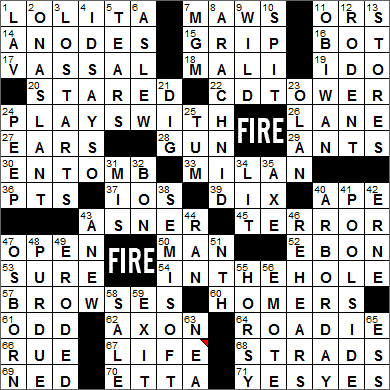 CROSSWORD SETTER: Ellen Leuschner
THEME: Fire in the Hole … we have two HOLES in the grid today, that we fill with the word FIRE. The word FIRE is then used to complete the adjacent answers in the grid:

54A. Warning before a detonation … and a hint to 16 of this puzzle’s answers : FIRE IN THE HOLE

Today’s Wiki-est, Amazonian Googlies
Across
1. 1962 Kubrick film : LOLITA
Vladimir Nabokov’s novel “Lolita” has a famously controversial storyline, dealing with a middle-aged man’s obsession and sexual relationship with a 12-year-old girl. Although “Lolita” is considered a classic today, after Nabokov finished it in 1953 the edgy subject matter made it impossible for him to find a publisher in the US (where Nabokov lived). In 1955, he resorted to publishing it in English at a printing house in Paris. Publication was followed by bans and seizures all over Europe. A US printing house finally took on the project in 1958, by which time the title had such a reputation that it sold exceptionally quickly. “Lolita” became the first book since “Gone with the Wind” to sell over 100,000 copies in its first three weeks in stores.

14. What juice may come out of? : ANODES
A battery is a device that converts chemical energy into electric energy. A simple battery is made up of three parts: a cathode, an anode and a liquid electrolyte. Ions from the electrolyte react chemically with the material in the anode producing a compound and releasing electrons. At the same time, the electrolyte reacts with the material in the cathode, absorbing electrons and producing a different chemical compound. In this way, there is a buildup of electrons at the anode and a deficit of electrons at the cathode. When a connection (wire, say) is made between the cathode and anode, electrons flow through the resulting circuit from the anode to cathode in an attempt to rectify the electron imbalance.

17. Lowly worker : VASSAL
In the feudal system of medieval Europe, a vassal was someone who agreed to provide some sort of service to a lord. A typical example of such a service would be military support. In return, the vassal was usually granted a piece of land.

18. Big African exporter of gold : MALI
The Republic of Mali is a landlocked country in western Africa, south of Algeria. Formerly known as French Sudan, the nation’s most famous city is Timbuktu. Mali is the third-largest producer of gold on the continent, after South Africa and Ghana.

22. Jewel case display unit : CD TOWER
A CD case is also known as a jewel box, and I am not sure why …

29. Stinging insects : FIRE ANTS
Fire ants are stinging ants, many species of which are called red ants. Most stinging ants bite their prey and then spray acid on the wound. The fire ant however, bites to hold on and then injects an alkaloid venom from its abdomen, creating a burning sensation in humans that have been nipped.

37. Island in the Aegean : IOS
The Cyclades are a group of islands in the Aegean Sea lying southeast of the Greek mainland. There are about 200 islands in the group, almost all of which are the peaks of a submerged mountain range. Ios is one of the larger islands, 11 miles long and 6 miles wide.

39. New Jersey’s Fort ___ : DIX
Fort Dix is the name commonly used for what is now more correctly called Joint Base McGuire -Dix-Lakehurst, a US Army base located near Trenton, New Jersey. Fort Dix was established in 1917 by the Army, and was consolidated with nearby Air Force and Navy facilities in 2009.

40. Great ___ : APE
The hominids are the great apes, and belong to the family of primates called Hominidae. Extant genera that make up the family Hominidae are:

43. Actor Ed : ASNER
Ed Asner is most famous for playing the irascible but lovable Lou Grant on “The Mary Tyler Moore Show” and on the spin-off drama “Lou Grant”. Off-screen, Asner is noted for his political activism. He served two terms as president of the Screen Actors Guild (SAG) and was very involved in the 1980 SAG strike. When “Lou Grant” was cancelled in 1982, despite decent ratings, there was a lot of talk that the cancellation was a move by the network against Asner personally. In fact one of Asner’s activist colleagues, Howard Hesseman (who played Johnny Fever), found that his show “WKRP in Cincinnati” was also cancelled … on the very same day.

50. Many a calendar beefcake : FIREMAN
It’s not really clear how the “cheesecake” came to be used for a provocative picture of a woman. It is known that the term arose in the 1930s, and originally applied to to the covers of “pulp” magazines that used the images of the attractive young females to attract a largely male audience. One theory is that during the depression years, the luscious cheesecake dessert was unattainable, as were the “luscious” models depicted on the magazine covers. The male equivalent of cheesecake is “beefcake”.

Heaven’s ebon vault,
Studded with stars unutterably bright,
Through which the moon’s unclouded grandeur rolls,
Seems like a canopy which love has spread
To curtain her sleeping world.

61. Ripley-esque : ODD
“Ripley’s Believe It or Not!” is a huge franchise on television, affiliated to a worldwide chain of museums. The franchise started out as cartoon feature appearing in newspapers in 1918.

62. Impulse transmitter : AXON
A nerve cell is more correctly called a neuron, and the long nerve fiber that is part of a neuron is called the axon.

64. One working for Kansas or Alabama : ROADIE
A “roadie” is someone who loads, unloads and sets up equipment for musicians on tour, on the road.

Kansas is a progressive rock band from Topeka. Kansas had some hits in the seventies.

Alabama is a band from Fort Payne, Alabama who perform a blend of country music and southern rock.

68. Valuable violins, for short : STRADS
Generations of the Stradivari family produced violins, the most famous of which were constructed by Antonio Stradivari.

69. Ludd from whom Luddites got their name : NED
In contemporary usage, a “Luddite” is someone who is slow to adopt new technology. This usage has even been extended to “Neo-Luddism”, meaning the active opposition to some technologies. It has been suggested that the term “Luddism” commemorates a youth called Ned Ludd, who smashed two mechanical knitting machines in 1779, in the belief that they represented automation that took away jobs. In the following decades, Luddism became an active movement, with Luddites going on rampages, smashing equipment that was deemed to create unemployment.

Down
1. Head : LAV
Our word “lavatory” originally referred to a washbasin, and comes from the Latin “lavatorium”, a place for washing. In the 1600s a “lavatory” came to mean a washroom, and in the 1920s a toilet.

7. Big inits. in Las Vegas : MGM
MGM Grand is the name given to a chain of hotel resorts and casinos, most famously the MGM Grand in Las Vegas. The MGM Grand Las Vegas was the largest hotel in the world when it opened in 1993, and is now the second-largest (behind the Venetian, also in Las Vegas).

8. Scorpion or tick : ARACHNID
Arachnids are creatures with eight jointed legs. The name of the class Arachnida comes from the Greek “aráchnē” meaning “spider”.

10. British W.W. II plane : SPITFIRE
The magnificent Supermarine Spitfire fighter aircraft is considered by most to have been key to the defeat of Germany’s Luftwaffe in the Battle of Britain. The plane was in production from the thirties through the fifties, and there were more Spitfires produced that any other British aircraft.

12. Woodchuck or chinchilla : RODENT
The woodchuck is also known as the groundhog, and is one a group of large ground squirrels called marmots.

23. Pearl S. Buck heroine : O-LAN
Pearl S. Buck’s novel “The Good Earth” won a Pulitzer in 1932, and helped Buck win the Nobel Prize for literature a few years later. The novel tells of life in a Chinese village and follows the fortunes of Wang Lung and his wife O-Lan. Although “The Good Earth” has been around for decades, it hit the bestseller list again in 2004 when it was a pick for Oprah’s Book Club.

38. Like Havarti cheese : SEMISOFT
Havarti cheese was invented in the mid-1800s by Danish farmer Hanne Nielsen. He chose “Havarti” from the name of his farm, Havarthigaard, located in the neighborhood of Øverød, north of Copenhagen.

40. Annual April celebration : ARBOR DAY
Arbor Day is a holiday each year in which people traditionally plant and care for trees. The first Arbor Day was held way back in 1872.

42. Seashore flier : ERNE
The ern (also erne) is also called the white-tailed eagle, and the sea-eagle.

48. Indiana rival : PURDUE
The Purdue Boilermakers are the athletic teams of Purdue University. The school picked up the nickname in 1891 after a football game with fellow Indiana school, Wabash College. A subsequent newspaper headline referred to Purdue as the “boiler makers”, a reference to the engineering education prevalent in Purdue at the time. And the name stuck …

58. Chapter 11 event, maybe : FIRE SALE
In the US Bankruptcy Code, Chapter 11 allows for a company or individual to reorganize affairs in the event that debts become so cumbersome that they cannot be cleared. Should the reorganization be unsuccessful, then Chapter 7 of the code might apply, which covers the sale of assets and distribution of proceeds to creditors.

65. Slaloming shape : ESS
“Slalom” is an anglicized version of the Norwegian word “slalam” that translates as “skiing race”.