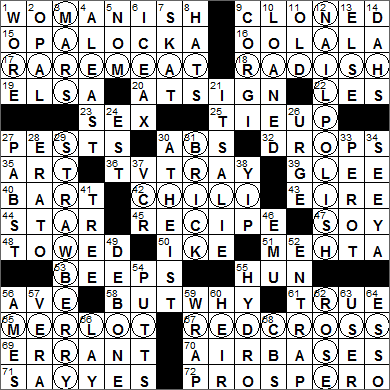 CROSSWORD SETTER: David Steinberg
THEME: Red Cross … each of the answers comprising circled letters in the grid is something RED. Those RED answers are in pairs that CROSS each other. Each pair is a RED CROSS:

17A. Something that’s just not done at the dinner table? : RARE MEAT
3D. Twix maker : MARS

15. Miami suburb : OPA-LOCKA
Opa-Locka is a rather interesting city in Florida. Opa-Locka is located near Miami, and has a themed city plan that is based on “One Thousand and One Nights”. The city hall has a very Arabian look, and some examples of street names are Ali Baba Avenue and Sesame Street.

19. “Frozen” character who sings “Let It Go” : ELSA
“Let It Go” is a highly successful song from the Disney animated film “Frozen” released in 2013. It was performed in the movie by Idina Menzel, who also was the voice actor for the character Elsa. “Let It Go” is one of the very few Disney songs to make it into the Billboard Top Ten.

27. Stinkbugs and others : PESTS
The stinkbug is so called due to its ability to exude a foul-smelling substance as a means of defense.

35. “___ is to console those who are broken by life”: Van Gogh : ART
Vincent Van Gogh was a Dutch post-impressionist painter who seems to have had a very tortured existence. Van Gogh only painted for the last ten years of his life, and enjoyed very little celebrity while alive. Today many of his works are easily recognized, and fetch staggering sums in auction houses. Van Gogh suffered from severe depression for many of his final years. When he was only 37, he walked into a field with a revolver and shot himself in the chest. He managed to drag himself back to the inn where he was staying but died there two days later.

39. “On cloud nine” feeling : GLEE
I don’t think that anyone is really certain of the etymology of the term “on cloud nine” meaning “elated”, but I do like the following explanation. The 1896 “International Cloud-Atlas” was a long-standing reference used to define cloud shapes that was based on a classification created by amateur meteorologist Luke Howard some decades earlier. The biggest and puffiest of all cloud shapes (and most comfortable-looking to lie on) is cumulonimbus. And you guessed it, of the ten cloud shapes defined in the atlas, cumulonimbus was cloud nine …

42. Tailgate dish : CHILI
The full name of the dish that is often called simply “chili” is “chili con carne”, Spanish for “peppers with meat”. The dish was first created by immigrants from the Spanish Canary Islands in the city of San Antonio, Texas (a city which the islanders founded). The San Antonio Chili Stand was a popular attraction at the 1893 Chicago World’s Fair, and that stand introduced the dish to the rest of America and to the world.

44. Symbol on Captain America’s shield : STAR
Captain America is a fictional superhero in comics published by Marvel Comics. He is the alter ego of a physically weak man called Steve Rogers who was given an experimental serum by the US Government during WWII.

45. It might have a stirring part : RECIPE
The Latin “recipere” means “to take”, and the imperative form “recipe” was written at the top of medical prescriptions as an instruction, i.e. Take (the following). This use of “recipe” evolved into the instruction for preparing a dish of food in the mid-1700s.

50. Half of a candy duo : IKE
Mike and Ike is a brandname of fruit-flavored candy made by Just Born starting in 1940. Just Born launched quite a clever marketing campaign in 2012 asserting that Mike and Ike had “split up due to creative differences”. The campaign involved production of two different boxes for the candy showing one or the other name scratched out. Clever …

51. Longtime New York Philharmonic conductor : MEHTA
Zubin Mehta is an Indian conductor of western classical music, from Mumbai. Mehta studied music in Vienna, where he made his conducting debut in 1958. In 1961 he was named assistant director of the Los Angeles Philharmonic, creating a fuss with the music director designate of the orchestra, Georg Solti. Solti resigned as a protest, and Mehta took his job. In 1978 Mehta took over as Music Director and Principal Conductor of the New York Philharmonic, eventually becoming the longest holder of that position.

55. Fifth-century invader : HUN
The Huns were a nomadic people who originated in Eastern Europe in the 4th century. Under the command of Attila the Hun they developed a unified empire that stretched from modern-day Germany across to the steppes of Central Asia. The whole of the Hunnic Empire collapsed within a year of Attila’s death in 453 AD.

65. Dark wine : MERLOT
Merlot is one of the main grapes used to make Bordeaux wines, along with Cabernet Sauvignon, Cabernet Franc and Petit Verdot.

67. Aid provider since 1864 … or a hint to this puzzle’s shaded squares : RED CROSS
Back in 1859, a Swiss businessman called Henri Dunant went to meet French emperor Napoleon III, to discuss making it easier to conduct commerce in French-occupied Algeria. The Emperor was billeted at Solferino, where France and Austria were engaged in a major battle. In one day, Dunant witnessed 40,000 soldiers die in battle and countless wounded suffering on the battlefield without any organized medical care. Dunant abandoned his business agenda and instead spent a week caring for the sick and wounded. Within a few years, in 1863, he had founded the precursor to the Red Cross, and in 1901 he was awarded the first ever Nobel Peace Prize.

69. Wandering : ERRANT
Someone described as “errant” is roving around, especially in search of adventure like “knights errant”.

Down
3. Twix maker : MARS
I remember Twix bars from way back in 1967 when they were introduced in the British Isles. Twix bars made it to the US over a decade later, in 1979.

4. Rays’ div. : AL EAST
The Tampa Bay Rays are a relatively “young” franchise, being formed in 1998. The initial name of the franchise was the Tampa Bay Devil Rays. While known as the Devil Rays, the team finished last in the league in almost every year. The name was changed to the Tampa Bay Rays in 2008, and I am told the Rays started into a streak of winning seasons soon after.

Alexandre Dumas’ “Three Musketeers” are Athos, Porthos and Aramis, and their young protégé is D’Artagnan. A musketeer was an infantry soldier who was equipped with a musket. Funnily enough, the three “musketeers” really don’t use their muskets, and are better known for their prowess with their swords.

7. Trick-taking game : SKAT
When I was a teenager in Ireland, I had a friend with a German father. The father taught us the game of Skat, and what a great game it is. Skat originated in Germany in the 1800s and is to this day the most popular card game in the country. I haven’t played it in decades, but would love to play it again …

9. Welsh ___ : CORGI
The Welsh corgi is a herding dog that originated in Britain, with two recognized breeds: the Pembroke and Cardigan. Corgis aren’t speedy enough to do their job by running around livestock like collies, and instead nip at the heels.

14. “Tom,” entirely, in Morse code : DAHS
Dahs and dits are the sound equivalents of dashes and dots of Morse Code. Samuel Morse didn’t invent Morse code, but it took his name because it was invented for use on the electric telegraph invented by him.

27. Colt 45 maker : PABST
Frederick Pabst was a brewer from the Milwaukee, Wisconsin area who had immigrated to the US from Prussia with his parents. Pabst bought himself into his father-in-law’s small brewery and over the years grew the enterprise into a public company, eventually changing the name from “Best” to “Pabst”. The most famous beer from Pabst is of course Pabst Blue Ribbon.

28. Muse whose name means “beloved” : ERATO
In Greek mythology, the muses are the goddesses who inspire the creation of literature and the arts. The number of muses is a subject of debate at times, but the most popular view is that there are nine:

29. Kool-Aid flavor : STRAWBERRY
The drink we know today as Kool-Aid was invented by Edward Perkins and his wife, in Perkins’ mother’s kitchen in southwest Nebraska. Kool-Aid is now the Official Soft Drink of the state.

30. One who’s beyond belief? : ATHEIST
The term “atheism”, meaning “disbelief in the existence of a god or gods”, comes from the Greek “atheos” meaning “without god”.

31. Adobe, e.g. : BRICK
The building material known as adobe has been around a long time, and has been used in dry climates all over the world. The original form of the word “adobe” dates back to Middle Egyptian times, about 2000 BC. The original spelling is “dj-b-t”, and translates as mud (sun-dried) brick.

33. Reform Party pioneer : PEROT
The Reform Party of the USA was founded in 1995 by Ross Perot with the intent of creating an alternative to the Republican and Democratic Parties. The Reform Party’s biggest success was the election of Jesse Ventura as Governor of Minnesota.

TiVo was introduced in 1999 and was the world’s first commercially successful DVR (Digital Video Recorder).

41. Symbol on the state flag of Maine or South Carolina : TREE
Maine’s state flag features the state coat of arms on a blue background. The center of the shield depicts a moose resting under a pine tree, and the shield is supported by a farmer and seaman. The North Star sits atop the shield.

54. Sounds from jalopies : PUTTS
The origins of our word “jalopy” meaning “dilapidated old motor car” seem to have been lost in time, but the word has been around since the 1920s. One credible suggestion is that it comes from Jalapa, Mexico as the Jalapa scrap yards were the destination for many discarded American automobiles.

56. NASA’s ___ Research Center : AMES
The Ames Research Center is just down the road here, located at Moffett Field, at the southern tip of San Francisco Bay. Joseph Ames was a member of the National Advisory Committee for Aeronautics when it was formed in 1915, and chaired the committee from 1919-1939.

57. Unseen “Cheers” wife : VERA
On the television show “Cheers”, the character Norm Peterson has a wife called Vera. Vera was mentioned in most of the episodes, but never actually showed her face. She made some brief appearances and vocal cameos, but that was about it.

64. It’s a gas up north : ESSO
The brand name Esso has its roots in the old Standard Oil company as it uses the initial letters of “Standard” and “Oil” (ESS-O). The Esso brand was replaced by Exxon in the US, but ESSO is still used in many other countries.