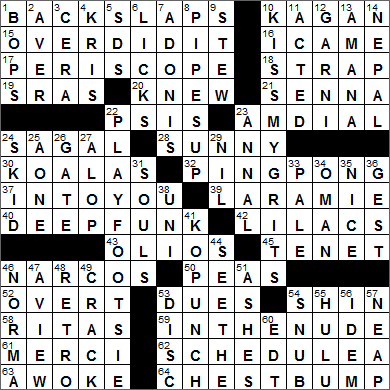 Today’s Wiki-est, Amazonian Googlies
Across
10. First female U.S. solicitor general, 2009 : KAGAN
Elena Kagan was the Solicitor General of the United States who replaced Justice John Paul Stevens on the US Supreme Court. That made Justice Kagan the first female US Solicitor General and the fourth female US Supreme Court justice. I hear she is a fan of Jane Austen, and used to reread “Pride and Prejudice” once a year. Not a bad thing to do, I’d say …

16. Start of a three-part claim : I CAME
The oft-quoted statement “Veni, vidi, vici” (“I came, I saw, I conquered”) is believed by many to have been written by Julius Caesar. The words date back to 47 BC and refer to the short war between Rome and Pharnaces II of Pontus.

17. Means of looking above and beyond : PERISCOPE
The prefix “peri-” is Greek in origin and means “around”. An example of its use is “periscope”, a device on a submarine for looking “around”.

21. Kind of tea used medicinally : SENNA
Sennas are used as purgatives and laxatives.

22. Penultimate letters : PSIS
The Greek letter psi is the one that looks a bit like a trident or a pitchfork. It is the 23rd letter of the 24 letters in the Greek alphabet.

24. Ritter’s co-star on TV’s “8 Simple Rules” : SAGAL
Katey Sagal played Peggy Bundy on “Married … with Children”. Later she took over as star of the show “8 Simple Rules” in the middle of its run, when John Ritter passed away unexpectedly in 2003. More recently, Sagal has been appearing on the FX drama “Sons of Anarchy”. In 2004, she married Kurt Sutter who created the “Sons of Anarchy” series.

30. Some joeys : KOALAS
“Joey” is the name given to all infant marsupials, not just kangaroos. No one really seems to know for sure what the etymology is of the term “joey”.

The koala bear really does look like a little bear, but it’s not even closely related. The koala is an arboreal marsupial and a herbivore, native to the east and south coasts of Australia. Koalas aren’t primates, and are one of the few mammals other than primates who have fingerprints. In fact, it can be very difficult to tell human fingerprints from koala fingerprints, even under an electron microscope. I’m a little jealous of the koala, as it sleeps up to 20 hours a day …

32. Go back and forth : PING-PONG
Ping-pong is called table tennis in the UK, where the sport originated in the 1880s. Table tennis started as an after-dinner activity among the elite, and was called “wiff-waff”. To play the game, books were stacked in the center of a table as a “net”, two more books served as “”rackets” and the ball used was actually a golf ball. The game evolved over time with the rackets being upgraded to the lids of cigar boxes and the ball becoming a champagne cork (how snooty is that?). Eventually the game was produced commercially, and the sound of the ball hitting the racket was deemed to be a “ping” and a “pong”, giving the sport its alternative name.

39. Gem City of the Plains : LARAMIE
A French (or French-Canadian) trapper named Jacques LaRamie came to the area surrounding modern-day Laramie in the late 1810s, one of the first Europeans to visit. One day he disappeared without trace in the backcountry, but his name survives as it’s used for the Laramie Mountains, Laramie River, and ultimately the city of Laramie, Wyoming.

40. Bad case of the blues : DEEP FUNK
“Funk” is ill-humor, a word that dates back to the mid-1700s and is probably a term that came from Scottish and northern English.

42. Title flora in a Whitman poem : LILACS
Walt Whitman wrote his famous poem “When Lilacs Last in the Dooryard Bloom’d” as an elegy following the violent death of President Lincoln.

Walt Whitman is considered to be one of the greatest American poets, born in 1819 on Long Island, and living through the American Civil War. Whitman was a controversial character, even during his own lifetime. One view held by him was that the works attributed to William Shakespeare were not actually written by Shakespeare, but rather by someone else, or perhaps a group of people.

43. Gallimaufries : OLIOS
Olio is a term meaning a hodgepodge or a mixture, coming from the mixed stew of the same name. The stew in turn takes its name from the Spanish “olla”, the clay pot used for cooking.

A “gallimaufry” is a hodge-podge, a confused medley. The term came into English from the French “galimafrée”, which is a stew or hash made from odds and ends available in the kitchen.

45. Something to live by : TENET
A tenet is an article of faith, something that is held to be true. “Tenet” is Latin for “he holds”.

46. Ring fingerers? : NARCOS
“Narc” or “narco” is a slang term for a law enforcement officer who tracks down criminals associated illegal drugs.

52. Patent : OVERT
Something described as “patent” is clearly evident, obvious. The term ultimately derives from the Latin “patentum” meaning “open, lying open”.

58. Awards for romances : RITAS
The RITA Awards are presented by Romance Writers of America (RWA) to authors exhibiting excellence in the genre of romantic fiction. The RITA is named for the RWA’s first president, Rita Clay Estrada.

62. Top form? : SCHEDULE A
Schedule A is an attachment that can be filed with IRS Form 1040. Many taxpayers use Schedule A to itemize deductions, an alternative to taking the standard deduction.

4. Kardashians’ mom : KRIS
Kris Kardashian is the matriarch of the Kardashian clan. She was married to the lawyer Robert Kardashian who was one of O. J. Simpson’s lawyers in his 1995 murder trial. The couple divorced in 1990 and Kris then married the celebrated decathlete from the 1976 Olympic Games, Bruce Jenner. That marriage ended in divorce as well, in 2015.

5. ’60s strikers : SDS
Students for a Democratic Society (SDS) was an activist group in the sixties. The SDS organized the largest student strike in the history of the United States on 26 April 1968, with about a million students staying away from class that day. The “Students for a Democratic Society” name was revived in 2006 with the foundation of a new US-based student organization with left wing beliefs. Today’s SDS was founded by a pair of high school students from Greenwich Village, New York.

6. Punishment, metaphorically : LICKS
To take a licking, or to takes one’s licks, is to take a beating, to take one’s punishment.

7. Dreamboat : ADONIS
In Greek mythology, Adonis is a beautiful young god loved by Aphrodite. Adonis dies in a hunting accident (gored by a boar), but not before he gives Aphrodite a child. Adonis was originally a Phoenician god “absorbed” into Greek lore (Phoenicia is modern day Lebanon). The child born of Adonis to Aphrodite was called Beroe, after which is named Beirut, the capital city of Lebanon. We also use the term “adonis” to mean “beautiful male”.

10. Old sitcom retort : KISS MY GRITS!
“Kiss my grits!” is a phrase commonly used by Flo on the sitcom “Alice”.

Florence Jean “Flo” Castleberry is a waitress in the sitcom “Alice” that originally aired on CBS in the 70s and 80s. Flo got her own sitcom (called “Flo”) which had a brief run in the early 80s. I saw a few episodes of “Alice”, but that’s about it. Oh, and Flo was played by Polly Holliday.

13. It has a range of ranges : AMANA
The Amana Corporation takes its name from the location of its original headquarters, in Middle Amana, Iowa.

14. It’s west of Sikkim : NEPAL
Nepal lies to the northeast of India. Today, the state is known as the Federal Democratic Republic of Nepal. In 2008, the Communist Party of Nepal won the country’s general election. Soon after, the Assembly voted to change the form of government, moving away from a monarchy and creating a secular republic.

Sikkim is a state in the country of India that lies in the Himalayas. Sikkim borders Nepal, Tibet and Bhutan, as well as the Indian state of West Bengal. Sikkim is the least populous state in the whole country.

23. Record of the year : ANNAL
“Annal” is a rarely used word, the singular of the more common “annals”. An annal would be the recorded events of one year, with annals being the chronological record of events in successive years. The term “annal” comes from the Latin “annus” meaning “year”.

27. Catawampus : ALOP
I had to go to one of my two huge volumes of the OED to find the definition of “alop”. It means “lop-sided”. A lovely word, I think, but it’s amazing that the term seems to have avoided the Internet!

34. Member of the 1990s Persian Gulf war coalition : OMAN
The coalition forces that engaged in the Gulf War of 1990 to 1991 comprised mainly US military personnel. The next largest contributors of forces were Saudi Arabia, the UK and Egypt, in that order.

36. Feat : GEST
Our word “gest” meaning a great deed or an exploit has been around since about 1300, and comes from the Old French word “geste” meaning the same thing. These days “geste” can also mean “gesture”.

46. Ibsen play parodying an opera : NORMA
“Norma, or A Politician’s Love” is an 1851 play written by Norwegian author Henrik Ibsen. The play is a satire based on Bellini’s opera of the same name, but Ibsen inserts politicians of the day as the main characters.

47. “___ From the Bridge” : A VIEW
“A View From the Bridge” is a play by Arthur Miller. It has an unusual structure for a play first performed in 1955 in that it is a verse-drama, meaning that all of the dialog is spoken in the form of verse, somewhat like the works of Shakespeare.

55. “Anywhere, Anytime” sloganeer : HULU
Hulu.com is a website providing streaming video of full television shows. It is a joint venture of NBC and Disney, and so features a lot of their content. The service is free and is supported by advertising, but you can sign up for a premium subscription and get access to more shows. A lot of younger folks seem to use Hulu quite often …

56. The same, to Caesar : IDEM
Idem is usually abbreviated as “id.” and is the Latin word for “the same”. In research papers idem is used in a list of references, in place of citations “already mentioned above”.