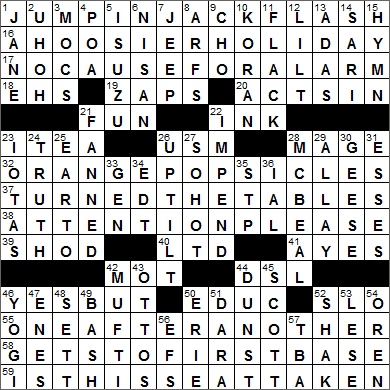 Today’s Wiki-est, Amazonian Googlies
Across
1. 1968 hit with the line “I was raised by a toothless, bearded hag” : JUMPIN’ JACK FLASH
“Jumpin’ Jack Flash” is a song released in 1968 by the Rolling Stones. The song was written by Mick Jagger and Keith Richards at Richards’ country house. Apparently Jagger awoke one morning to the sound of a gardener doing his work. Richards told Jagger that the gardener’s name was Jumpin’ Jack Dyer, and the song evolved from there.

16. Theodore Dreiser travelogue : A HOOSIER HOLIDAY
“A Hoosier Holiday” is a 1916 travel book written by novelist Theodore Dreiser. It recounts a car journey taken by Dreiser from New York City to Indiana, his first trip home to his native state.

22. Means of maritime defense : INK
Octopuses and squid have the ability to release a dark pigment into the water as a means of escape. The dark pigment is called cephalopod ink (the squid and octopus belong to the class cephalopod). The dark color is created by melanin, the same substance that acts as a pigment in human skin.

26. Sch. near Gulfport : USM
The University of Southern Mississippi (USM) is located in Hattiesburg, Mississippi about 100 miles northeast of New Orleans. The school was founded in 1910, and its athletic teams are known as the Golden Eagles.

28. Conjurer, old-style : MAGE
Mage is an archaic word for a magician.

32. Alternatives to lemon ices : ORANGE POPSICLES
The term ice pop has been supplanted in the US by “popsicle”, as the Popsicle brand of ice pop became so popular. We still use “ice pop” in Ireland, and in the UK the same thing is called an “ice lolly”, and in Australia it’s an “ice block”.

40. Classic Ford : LTD
There has been a lot of speculation about what the abbreviation LTD stands for in the car model known as “Ford LTD”. Many say it is an initialism standing for Luxury Trim Decor, and others say that it is short for “limited”. Although the car was produced in Australia with the initialism meaning Lincoln Type Design, it seems LTD was originally chosen as just three meaningless letters that sound well together.

44. Kind of provider, for short : DSL
An Internet Service Provider (ISP) is just what the name indicates, a company that provides its customers with access to the Internet. One way that ISPs differentiate themselves from each other is in the way in which end users are connected to the ISP’s network. So, there are cable ISPs, DSL ISPs, dial-up ISPs and satellite ISPs.

52. ___ Poke : SLO
Slo Pokes are a brand of candy described as “caramel on a stick”, made by the Gilliam Candy Company.

55. Seriatim : ONE AFTER ANOTHER
We use the Latin word “seriatim” to mean “one after another”. The term means the same thing in Latin, i.e. “in a series”.

Down
1. Dick’s running mate : JANE
The “Dick and Jane” beginning reader series of books was originally written by William S. Gray and Zerna Sharp and first published in the 1930s. There are claims of plagiarism from an earlier pair of books published throughout the British Commonwealth that featured the characters Dick and Dora. Indeed, I grew up in the British Isles with “Dick and Dora”, and always assumed that “Dick and Jane” were somehow their American cousins!

4. Bluegrass genus : POA
Poa is a genus in the grass family. Poa grass can be called meadow grass, bluegrass, tussock and speargrass. “Poa” is a Greek word meaning “fodder”.

5. Trooper, e.g. : ISUZU
Isuzu is a Japanese auto manufacturer, very successful in the medium and heavy truck market in particular. You’ll be seeing fewer and fewer Isuzu passenger cars on American roads though, as the company exited the US passenger car market in 2008. The Isuzu Trooper was one of their most successful SUVs, produced between 1981 and 2005.

6. It comes before Iyar : NISAN
Nisan is the first month in the Hebrew ecclesiastical calendar.

7. “Go anywhere, do anything” sloganeer : JEEP
The Jeep is the original off-road vehicle. It was developed by the American Bantam Car Company in 1940 at the request of the US government who recognized the upcoming need for the armed forces as American involvement in WWII loomed. The Bantam Company was too small to cope with demand, so the government gave the designs to competing car companies. The design and brand eventually ended up with AMC in the seventies and eighties.

8. Lab sounds? : ARFS
The Labrador (Lab) breed of dog has been around at least since 1814, and the chocolate Labrador appeared over a century later in the 1930s.

9. Actor John of “American Pie” films : CHO
John Cho is an actor and musician who was born in Seoul, South Korea but who has lived in the US since he was a young boy. Cho’s break in movies came in playing Harold Lee in the ”Harold & Kumar” films. He is now making a name for himself playing Mr. Sulu in the latest “Star Trek” movies.

10. A hafiz knows it by heart : KORAN
“Hafiz” is an Arabic word meaning “guardian” and “retentive”. The term is used for someone who has completely memorized the Qur’an and is knowledgeable and is an authority on the text.

11. P.R. person : FLACK
“Flack” is a slang term for a press agent. The term apparently originated in the 1930’s and is derived from movie publicity agent Gene Flack.

14. Wear over a petticoat : SARI
The item of clothing called a “sari” (also “saree”) is a strip of cloth, as one might imagine, unusual perhaps in that is unstitched along the whole of its length. The strip of cloth can range from four to nine meters long (that’s a lot of material!). The sari is usually wrapped around the waist, then draped over the shoulder leaving the midriff bare. I must say, it can be a beautiful item of clothing.

A petticoat is an undergarment worn from the waist that goes under a skirt or dress. That said, the term “petticoat” was used in my day back in the British Isles for a full-length slip. The name translates literally as “small coat” and was originally a padded coat worn by men under armor.

15. Service lines? : HYMN
A “hymn” is a song of praise or thanksgiving to a deity. The term comes into English via Old French and is ultimately derived from the Greek “hymnos”, the word for an ode or song in praise of the gods. The Greek term is possibly a variant of “hymenaios” meaning “wedding song”, derived from Hymen, the Greek god of marriage.

23. Drops in the bucket : IOTAS
Iota is the ninth letter in the Greek alphabet. We use the word “iota” to portray something very small as it is the smallest of all Greek letters.

28. Ally in a partnership : MCBEAL
“Ally McBeal” is a very successful television show that aired from 1997 to 2002. It starred Calista Flockhart in the title role, as a successful lawyer. I must admit, I never watched the show, but I am told by a kind blog reader that it’s good viewing. It was created by David E. Kelley, who is also the man behind other successful legal dramas including “The Practice”, “Boston Legal” and “Harry’s Games’. Kelley is married to actress Michelle Pfeiffer.

30. V composition, perhaps : GEESE
Apparently geese fly in a V-formation for a couple of reasons. One is that it makes for efficient flight and conserves energy. The leading bird gets no advantage, but every following bird gets to “slipstream” a little. It has been noted that the lead bird drops to the back of the formation when it gets fatigued. It’s also thought that the flock can stick together more easily when in formation, so it is more difficult to lose someone along the way.

31. Indicators of possessiveness : ESSES
The man’s, the woman’s, the boy’s …

35. 500 letters : STP
STP is a brand name for automotive lubricants and additives. The name STP comes from “Scientifically Treated Petroleum”.

The first Indy 500 race was held on Memorial Day in 1911. The winner that day was one Ray Harroun. Harroun had seen someone using a rear view mirror on a horse-drawn vehicle, and decided to fit one on his Marmon “Wasp” motor car. Supposedly that was the first ever use of a rear-view mirror on a motor vehicle.

42. Off-duty wear : MUFTI
“Mufti” is civilian dress that is worn by someone who usually wears a uniform. The term is probably related somehow to the Arabic “mufti”, the word for a Muslim scholar who interprets Islamic law.

44. “Spider-Man” actress : DUNST
Kirsten Dunst is a Hollywood actress from Point Pleasant, New Jersey. Dunst is perhaps best known for playing the love interest and female lead in the “Spider-Man” series of movies opposite Tobey Maguire. Personally, my favorite Dunst films are “Wimbledon” and “Marie Antoinette”. Dunst is a dual citizen of the US and Germany, as her father is from Hamburg.

45. Hero of the Mexican-American War : SCOTT
Winfield Scott was a general in the US Army and presidential candidate who lost to Franklin Pierce in 1852. Scott was so popular at the time that his Whig Party abandoned the incumbent President Millard Fillmore in favor of Scott as a candidate to replace Fillmore. However, Scott lost to Franklin Pierce. It is thought by many that the contemporary phrase “Great Scott!” is a reference to Winfield Scott.

46. Meditative sort : YOGI
A yogi is a practitioner of yoga.

47. Chemical endings : -ENES
An alkene is an organic compound made up of carbon and hydrogen atoms. It differs from an alkane in that it has at least one C=C double bond. The simplest alkene is the gas ethylene, a major raw material used in the manufacture of plastics (like polyethylene).

48. Granite paving block : SETT
A sett is a small rectangular paving stone with a rounded top used to make a road surface. It’s like a cobblestone, I think …

49. More than dis : BASH
“Dis” is a slang term meaning “insult” that originated in the eighties, and is a shortened form of “disrespect” or “dismiss”.

50. Lakeside tribe : ERIE
The Erie people lived on lands south of Lake Erie. The Erie were sometimes referred to as the Cat Nation, a reference to the mountain lions that were ever-present in the area that they lived. The name “Erie” is a shortened form of “Erielhonan” meaning “long tail”, possibly a further reference to the mountain lion or cat, which was possibly used as a totem. The Erie people gave their name to the Great Lake.

52. Common English lit subj. : SHAK
Although William Shakespeare is known as a playwright and poet, he perhaps began his career as an actor in London. Shakespeare definitely acted in some of his own plays early in his career, as well as some plays by other playwrights of the period, and in particular those of Ben Johnson.

53. Start of treason? : LESE
Lèse majesté is the crime of offending the dignity of the “majesty” or sovereign, or the state. The term is from French Law, and comes from the law of Ancient Rome. In Latin “laesa maiestas” means “injured majesty”. Clearly, the term has no relevance in the United States but in other countries, including many in Europe, the law is occasionally cited.

54. Opera conductor Daniel : OREN
Daniel Oren is a conductor who was born in Israel. He is the artistic director of the Verdi Opera House in Salerno, Italy.