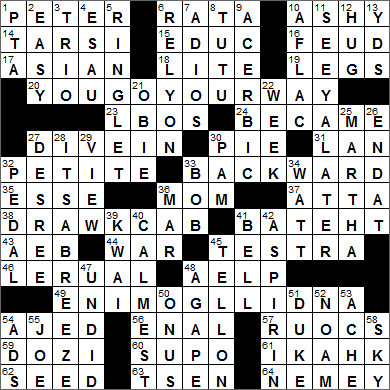 CROSSWORD SETTER: Joe Krozel & Peter A. Collins
THEME: You Go Your Way, eniM oG ll’I dnA … all the across-answers in the botom half of the grid are written BACKWARDS:

Additionally, the three answer going acorss the middle of the grid all read the same forwards and backwards:

Today’s Wiki-est, Amazonian Googlies
Across
1. Die (out) : PETER
The verb phrase “to peter out”, meaning “to fizzle out”, originated in the 1840s in the American mining industry. While the exact etymology isn’t clear, it probably derives from the term “saltpetre”, a constituent of gunpowder.

14. Podiatrist’s concerns : TARSI
The tarsals (also “tarsi”) are the ankle bones, equivalent to the carpals in the wrist.

17. Like the mynah, by origin : ASIAN
Some species of myna (also “mynah”) bird are known for their ability to imitate sounds.

23. Some mergers, for short : LBOS
A leveraged buyout (LBO) is a transaction in which an investor acquires a controlling volume of stock in a company, but buys that stock with borrowed funds (hence “leveraged”). Often the assets of the acquired company are used as collateral for the borrowed money. There is a special form of LBO known as a management buyout (MBO) in which the company’s own management team purchases the controlling interest.

30. Three Stooges missile : PIE
If you’ve seen a few of the films starring the Three Stooges you’ll have noticed that the line up changed over the years. The original trio was made up of Moe and Shemp Howard (two brothers) and Larry Fine (a good friend of the Howards). This line up was usually known as “Moe, Larry and Shemp”. Then Curly Howard replaced his brother when Shemp quit the act, creating the most famous trio, “Moe, Larry And Curly”. Shemp returned when Curly had a debilitating stroke in 1946, and Shemp stayed with the troupe until he died in 1955. Shemp was replaced by Joe Besser, and then “Curly-Joe” DeRita. When Larry Fine had a stroke in 1970, it effectively marked the end of the act.

35. To be, to Brutus : ESSE
The most famous man with the name “Brutus” in Ancient Rome was Marcus Junius Brutus the Younger. It was this Brutus that Julius Caesar turned to when he was assassinated on the steps of the Senate. William Shakespeare immortalized Brutus by featuring him in his play, “Julius Caesar”, and giving his victim the line “Et tu, Brute?”

41. Something you might put drinks on : THE TAB
When we “run a tab” at a bar say, we are “running a tabulation”, a listing of what we owe. Such a use of “tab” is American slang that originated in the 1880s.

46. It’s an honor : LAUREL
In the Ancient Olympic Games, the winner of an event was awarded an olive wreath. When the games were revived in 1896, the winners were originally given a silver medal and an olive branch, with runners-up receiving a bronze medal and a laurel branch. The tradition of giving gold, silver and bronze medals began at the 1904 Summer Olympic Games held in St. Louis, Missouri.

59. Phillips-Van Heusen subsidiary : IZOD
Jack Izod was a tailor of some repute over in England, producing shirts for King George V as well as other members of the Royal Family. As Izod was about to retire, he was approached for the use of his name by an American clothing manufacturer based in New York. The brand Izod of London was introduced to America in 1938.

61. Material for work? : KHAKI
“Khaki” is an Urdu word, translating literally as “dusty”. The word was adopted for its current use as the name of a fabric by the British cavalry in India in the mid-1800s.

64. Mideast land : YEMEN
Yemen is located on the Arabian Peninsula, lying just south of Saudi Arabia and west of Oman. Yemen is the only state on the peninsula that is a republic (its official name is the Republic of Yemen). Everyone over the age of 18 gets to vote, but only Muslims can hold elected office.

3. Cream, for instance : TRIO
Cream were a “supergroup” from Britain, meaning the band was comprised of musicians from other successful groups. The band’s members were Eric Clapton (from the Yardbirds), and Jack Bruce and Ginger Baker (both from the Graham Bond Organisation).

4. Biblical twin : ESAU
Esau, was the grandson of Abraham and the twin brother of Jacob, the founder of the Israelites. When Esau was born to Isaac and Rebekah, the event was described, “Now the first came forth, red all over like a hairy garment”. Esau is portrayed later in life as being very different from his brother, as a hunter and someone who loves the outdoor life.

7. “I’m outta here!” : ADIOS!
The term “adios” is Spanish for “goodbye”. In the Spanish language, “adios” comes from the phrase “a dios vos acomiendo” meaning “I commend you to God”.

8. Need for some dancers : TUTU
The word “tutu”, used for a ballet dancer’s skirt, is actually a somewhat “naughty” term. It came into English from French in the early 20th century. The French “tutu” is an alteration of the word “cucu”, a childish word for “cul” meaning the “bottom,” or “backside”.

10. Big name in insurance : AFLAC
Back in 1999, Aflac was already huge in the world of insurance but it wasn’t a household name. So, a New York advertising agency was given the task of making the Aflac brand more memorable. One of the agency’s art directors, while walking around Central Park one lunchtime, heard a duck quacking and in his mind linked it with “Aflac”, and that duck has been “Aflacking” ever since …

21. Stage award since 1956 : OBIE
The Obies are the “Off-Broadway Theater Awards”. The Obies are presented annually and the recipients are chosen by “The Village Voice” newspaper.

22. TV’s “This ___” : WEEK
“This Week” is a Sunday morning talk show on ABC that is hosted by George Stephanopoulos.

27. One-named singer of “You Gotta Be” : DES’REE
Des’ree is an R&B singer from London, England. One of Des’ree’s biggest hits is the song “Kissing You”, which was used in the 1996 film adaption of Shakespeare’s “Romeo and Juliet” starring Leonardo DiCaprio and Claire Danes.

29. Penthouse perk : VIEW
Originally, the term “penthouse” was used to describe a modest building attached to a main structure. In fact, in centuries past, the manger in which Jesus was born was often referred to as a penthouse. The modern, more luxurious connotation dates back to the early twenties.

30. Spray in a kitchen : PAM
PAM cooking oil was introduced in 1961 by Leon Rubin and Arthur Meyerhoff. The name “PAM” is an acronym … standing for “Product of Arthur Meyerhoff”. Who’d a thunk it …?

32. Organ control : PEDAL
The pedal keyboard on an organ is the keyboard that is played using the feet. Usually the pedals control the lower notes, the bass line of a piece of music.

39. Title river in a 1957 film : KWAI
The river referred to in the movie (and novel) “The Bridge on the River Kwai” is actually called the Khwae Yai River, and is in western Thailand. The original novel by Pierre Boulle was published in French in 1952, and the wonderful movie released in 1957. Both tell the story of construction of part of the Burma Railway and a bridge over the river, using prisoners of war as laborers. The film stars William Holden, Alec Guinness and Jack Hawkins.

42. It’s a relief : ASPIRIN
Aspirin was a brand name for the drug acetylsalicylic acid. Aspirin was introduced by the German drug company Bayer AG in the late 1800s. As part of the war reparations paid by Germany after WWI, Bayer AG lost the use of the trademark “Aspirin” (as well as the trademark Heroin!) and it became a generic term.

50. Stigma : ONUS
A stigma (plural “stigmata), in a social sense, is a distinguishing mark of disgrace. For example, one might have to suffer the stigma of being in prison. The term derives from the Greek “stigma”, which was a mark or brand.

51. 2015 N.C.A.A. basketball champs : DUKE
Duke University was founded in 1838 as Brown’s Schoolhouse. The school was renamed to Trinity College in 1859, and to this day the town where the college was located back then is known as Trinity, in honor of the school. The school was moved in 1892 to Durham, North Carolina in part due to generous donations from the wealthy tobacco industrialist Washington Duke. Duke’s donation required that the school open its doors to women, placing them on an equal footing with men. Trinity’s name was changed to Duke in 1924 in recognition of the generosity of the Duke family.

52. Linguist Chomsky : NOAM
Noam Chomsky is a professor of linguistics at MIT. Chomsky is known as one of the fathers of modern linguistics.

55. Mud : JOE
It seems that no one really knows why we refer to coffee as “joe”, but we’ve been doing so since early in WWII.

58. Domain of Thor : SKY
In Norse mythology, Thor was the son of Odin. Thor wielded a mighty hammer and was the god of thunder, lightning and storms. Our contemporary word “Thursday” comes from “Thor’s Day”.