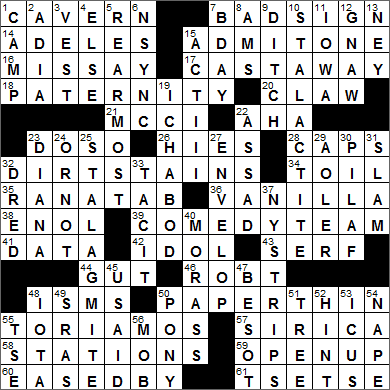 CROSSWORD SETTER: Joe Krozel
THEME: Stalactite and Stalagmite … there is a note with today’s puzzle:

This puzzle seemingly has more than one solution … but only one is “correct.”

Today’s Wiki-est, Amazonian Googlies
Across
7. Red sky at morning, to a sailor : BAD SIGN
We often see red in the sky at sunrise and sunset. This is because at those times of day, sunlight travels through the thickest part of the atmosphere and only the red wavelengths of light make it through. Dust and moisture particles in the atmosphere tend to scatter the other wavelengths. These scattering particles are most concentrated in weather systems, and weather systems tend to move from west to east, because of westerly trade winds. So, if we see a red sky illuminated by the sun rising in the east, then the red is caused by a weather system to the east i.e. one that has passed. If we see a red sky lit by a setting sun in the west, it is likely that the sunlight is coming through a weather system that is on its way. So the old adage has some truth to it:
Red sky at night, sailor’s delight. Red sky in morning, sailor’s warning

14. Astaire and Adkins : ADELES
Adele Astaire was Fred Astaire’s elder sister. Before Fred made it big in movies, the two were a successful music hall act, particularly in England. Adele married into nobility in England, taking the name Lady Charles Cavendish.

17. One sending a message in a bottle, maybe : CASTAWAY
Messages in bottles can float around the sea for a long time. One of the oldest messages ever delivered was found in 1999 in the River Thames in England. A ginger-beer bottle had been thrown into the English Channel in 1914 during WWI by British soldier Thomas Hughes, containing a letter to his wife. Private Hughes was killed two days after sending off his message, and his wife passed away in 1979. The message was delivered after its 85-year journey to the 86-year-old daughter of the couple, who was living in New Zealand at the time.

34. *Work hard : TOIL (MOIL is “incorrect”)
“To moil” is to toil or to slave away. The verb originally applied to laboring in the mire, swamp. The term comes from the Old French “moillier” meaning “to wet”, as in getting wet in the mire.

38. Certain alkene : ENOL
An enol is an alkene with a hydroxyl group, sort of part-alkene and part-alcohol. The term “enol” therefore, is a portmanteau of “alkene” and “alcohol”.

39. Sid Caesar and Imogene Coca, e.g. : COMEDY TEAM
Imogene Coca was a comic actress from Philadelphia who is perhaps best-known for her appearances on television starting in the forties. Famously, Coca performed opposite Sid Caesar on NBC’s “Your Show of Shows” in the fifties.

41. Grist for a statistician : DATA
When grain has been separated from its chaff, to prepare it for grinding, it is called “grist”. Indeed, the word “grist” is derived from the word “grind”. Grist can be ground into a relatively coarse meal, or into a fine flour. The names can be confusing though. For example, the grist from maize when ground to a coarse consistency is called “grits”, and when ground to a fine consistency is called “corn meal”. There is an idiomatic phrase “grist for one’s mill”, meaning something used to one’s advantage.

42. Taylor Swift, for one : IDOL
Singer Taylor Swift had one of her first gigs at the US Open tennis tournament when she was in her early teens. There she sang the national anthem and received a lot of favorable attention for the performance.

43. Underling of yore : SERF
A serf was a member of the lowest feudal class, someone attached to land owned by a lord. “Serf” comes from the Latin “servus”, meaning “slave”.

46. ___ Morris, signature on the Declaration of Independence : ROBT
Robert Morris was a Philadelphia merchant who had been born in Liverpool, England. Morris provided sums of money from his own purse to help finance the Continental Army during the American Revolution, and was a signatory to the Declaration of Independence. Morris also signed the Articles of Confederation and the United State Constitution. Sadly, he lost his fortune in 1798 and spent several years in debtors’ prison. It was partly because of Morris’ situation that the US Congress passed the nation’s first bankruptcy legislation, which allowed him to leave prison. Morris spent his subsequent years quietly, although in poor health. He passed away in 1806.

55. Singer with the 1994 double-platinum album “Under the Pink” : TORI AMOS
Tori Amos is an American pianist and singer. Amos started playing the piano at two years old, and was composing piano pieces by age five. She was playing in piano bars (chaperoned by her father) when she was 14. I’m going to have to find some of her music (I lead such a sheltered life …)!

57. Judge John who was Time’s 1973 Man of the Year : SIRICA
Judge John Sirica came to national attention when he presided over the trial of the Watergate burglars. It was Judge Sirica who issued the order for President Richard Nixon to hand over the tape recordings of conversations in the Oval Office, the so-called “Watergate tapes”.

61. Fly in a jungle : TSETSE
Tsetse flies live on the blood of vertebrate mammals. The name “tsetse” comes from Tswana, a language of southern Africa, and translates simply as “fly”. Tsetse flies are famous for being carriers of the disease known as “sleeping sickness”. Sleeping sickness is caused by a parasite which is passed onto humans when the tsetse fly bites into human skin tissue. If one considers all the diseases transmitted by the insect, then the tsetse fly is responsible for a staggering quarter of a million deaths each year.

Down
2. 1998 Sarah McLachlan hit : ADIA
Sarah McLachlan is singer/songwriter from Halifax, Nova Scotia who lives in Vancouver. In 1997, McLachlan married Ashwin Sood, the drummer in her band. Apparently the 1998 hit song “Adia”, that she co-wrote and recorded, was intended as an apology to her best friend … for stealing her ex-boyfriend and then marrying him!

3. One of three pieces : VEST
Here’s another word that often catches me out. What we call a vest in the US is a waistcoat back in Ireland. And the Irish use the word “vest” for an undershirt.

8. Morns : AMS
The 12-hour clock has been around a long time, and was even used in sundial format in Ancient Egypt. Our use of AM and PM dates back to Roman times, with AM standing for Ante Meridiem (before noon) and PM standing for Post Meridiem (after noon). However, the Romans originally used the AM concept a little differently, by counting backwards from noon. So, 2AM to the Romans would be two hours before noon, or 10AM as we would call it today.

10. 1-Across sight : STALACTITE (STALAGMITE is “incorrect”)
A stalactite is a mineral deposit that hangs from the roof of a cave, formed by continuous dripping of mineral-rich water. “Stalactite” comes from the Greek word “stalasso” meaning “to drip”.

11. Name repeated in ___ City, ___ : IOWA
Iowa City was founded in 1839 in a move to relocate the capital of the Iowa Territory nearer to the center of the territory. The city was constructed, and officially made the capital in 1841. The Iowas Territory was admitted to the union as a state in 1846, and the state capital moved to Des Moines in 1857.

13. Actor Richard of “Mrs. Miniver” : NEY
Richard Ney was an actor from New York City who is best-remembered on the big screen for playing the eldest child of Clem and Kay Miniver in the 1942 WWII drama “Mrs. Miniver”. Famously, Ney married Greer Garson a year after “Mrs Miniver” was released. Garson was a little older than Ney and had played his mother in the film.

15. Part of many plays, but not “Waiting for Godot” : ACT III
An Irishman I may be, but I have sat through so many Samuel Beckett plays (the Irish dramatist) and I have yet to come away feeling satisfied that I spent my time well. Of course I am in the minority, as Beckett’s play “Waiting for Godot” was once voted the most significant English language play of the 20th century. Maybe I will give “Waiting for Godot” another chance one day, but I doubt it …

19. Schoolmaster in a Washington Irving tale : ICHABOD
Ichabod Crane is the protagonist in Washington Irving’s short story, “The Legend of Sleepy Hollow”. It’s thought that Irving “stole” the name from someone he actually knew, a captain in the army called Ichabod B. Crane.

22. Syrian V.I.P. : ASSAD
Dr. Bashar al-Assad is the current President of the Syrian Arab Republic and the son of the former President Hafez al-Assad whom he replaced in 2001. President Assad is a medical doctor, speaks fluent English and conversational French. Assad was studying ophthalmology in London when he met his wife, who is an Englishwoman.

23. Mythical huntress : DIANA
Diana was the Roman goddess of the hunt, the moon and birthing. The Greek equivalent of Diana was the goddess Artemis. According to Roman mythology, Diana was the twin sister of Apollo, and the daughter of Jupiter and Latona.

25. 1-Across sight : STALAGMITE (STALACTITE is “incorrect”)
A stalagmite is a rock formation that rises from the floor of a cave as a result of mineral deposits dissolved in water dripping from the ceiling. The largest-known stalagmite in the world is located in the largest cave in the world: Son Doong Cave in Vietnam. That stalagmite is over 230 feet tall.

A stalactite is a mineral deposit that hangs from the roof of a cave, formed by continuous dripping of mineral-rich water. “Stalactite” comes from the Greek word “stalasso” meaning “to drip”.

29. Many an early Internet adopter : AOLER
Founded as Quantum Computer Services in 1983, the company changed its name in 1989 to America Online. As America Online went international, the acronym AOL was used in order to shake off the “America-centric” sound to the name. During the heady days of AOL’s success the company could not keep up with the growing number of subscribers, so people trying to connect often encountered busy signals. That’s when users referred to AOL as “Always Off-Line”.

30. Rice ___ : PILAF
“Pilaf” is a Persian word, and we use it to describe rice that is browned in oil and then cooked in a seasoned broth.

31. Big pan? : SLAM
To pan something is to criticize it harshly.

32. Historic Scott : DRED
Famously, the slave Dred Scott was unsuccessful in suing for his freedom in St. Louis, Missouri in 1857.

37. Steakhouse offerings, for short : NY STRIPS
Delmonico’s Restaurant in New York City, which dates back to 1827, had a signature cut of short loin that it served as a Delmonico steak. That same cut came to be known in the US as a New York strip steak, due to the association with the city and the restaurant.

45. Humanitarian org. : USAID
The US Agency for International Development (USAID) was set up by President John F. Kennedy in 1961. The agency’s mission is to end extreme poverty and promote democratic societies, while helping to advance the security and prosperity of the US.

48. Not one ___ : IOTA
Iota is the ninth letter in the Greek alphabet. We use the word “iota” to portray something very small as it is the smallest of all Greek letters.

49. Some doñas: Abbr. : SRAS
In Spain, a title of respect for men is “Don”. The equivalent female title is “Dona”.

53. Where cc’s may be delivered : ICUS
Intensive Care Unit (ICU)

55. K’ung Fu-___ (Confucius) : TSE
The sayings of the Chinese philosopher Confucius (anglicized from “K’ung Fu-Tse”) are collected in a work called “The Analects” or “Linyu”. It wasn’t Confucius who wrote down his thoughts though, but rather his pupils, some 40 or so years after his death in 479 BC.

56. Approach en masse : MOB
“En masse” is a French term, which is best translated as “as a group”.