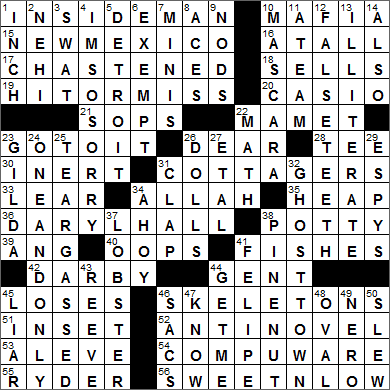 Today’s Wiki-est, Amazonian Googlies
Across
10. Group with rackets : MAFIA
Apparently “Cosa Nostra” is the real name for the Italian Mafia. “Cosa Nostra” translates as “our thing” or “this thing of ours”. The term first became public in the US when the FBI managed to turn some members of the American Mafia. The Italian authorities established that “Cosa Nostra” was also used in Sicily when they penetrated the Sicilian Mafia in the 1980s. The term “Mafia” seems to be just a literary invention that has become popular with the public.

15. U.S. state with the oldest capital city : NEW MEXICO
Santa Fe is New Mexico’s capital, and the fourth most-populous city in the state (after Albuquerque, Las Cruces and Rio Rancho). Sitting at 7,199 feet above sea level, Santa Fe is the highest state capital in the US. The city’s name translates from Spanish as “Holy Faith”. The full name of the city when it was founded in 1607 was “La Villa Real de la Santa Fe de San Francisco de Asís”, meaning “the Royal Town of the Holy Faith of Saint Francis of Assisi”. It became the capital of the province Santa Fe de Nuevo México in 1610, making Santa Fe the oldest state capital in the US.

20. Tokyo-based electronics giant : CASIO
Casio is a Japanese manufacturer of mainly electronic products, including calculators and watches. It was Casio that produced the first portable and compact all-electric calculator, in 1957 would you believe?

21. Minor concessions : SOPS
Cerberus is a dog with three heads that appears in both Greek and Roman mythology. Cerberus had the job of guarding the gates of Hades and preventing those who had crossed the River Styx from ever escaping. A sop is a piece of food that has been dipped in some liquid, as one might sop a piece of bread in soup. There is an idiomatic expression, “to give a sop to Cerberus”, which means to give someone a bribe, or pay someone off. The idea is that if one could bribe Cerberus, give him a sop to eat, then he would let you pass and escape from Hades.

22. “The Cryptogram” playwright David : MAMET
David Mamet is best known as a playwright, and indeed won a Pulitzer for his 1984 play “Glengarry Glen Ross”. Mamet is also a successful screenwriter and received Oscar nominations for the films “The Verdict” (1982) and “Wag the Dog” (1997).

33. Disinheritor of Cordelia : LEAR
“King Lear” is one of William Shakespeare’s tragedies. Lear’s three daughters figure prominently in the storyline. The three are, in order of age:

36. Member of a pop duo whose debut album was titled “Whole Oats” : DARYL HALL
Daryl Hall & John Oates are a pop music duo, most successful in the late seventies and early eighties. They had six number one hits, including the 1982 release “Maneater”.

39. Film director Lee : ANG
Taiwanese director Ang Lee sure has directed a mixed bag of films, mixed in terms of genre but not in terms of quality. He was at the helm for such classics as “Sense & Sensibility” (my personal favorite), “Crouching Tiger, Hidden Dragon”, “Hulk”, “Brokeback Mountain” and “Life of Pi”.

44. Man of urbanity : GENT
We use “urbane” today to mean something courteous or refined. Back in the 1500s the term was used in the same way that we now use “urban”. Those townsfolk thought they were more sophisticated than the countryfolk, and so the usage evolved.

46. Dancers in danse macabre imagery : SKELETONS
“Danse Macabre” is a symbolic dance that dates back to late-medieval times. Known in English as “Dance of Death”, it features the devil in the form of a skeleton, leading people or other skeletons to their graves.

52. Literary term popularized by Sartre : ANTINOVEL
An antinovel is experimental work of fiction that was popularized by French philosopher Jean-Paul Sartre as an “anti-roman” (the French translation of the term). I’ve never read an antinovel, and it sounds like I would hate the genre. It is characterized by a lack of plot, presentation of characters outside of chronological order, and experimental use of vocabulary.

54. Big name in the mainframe business : COMPUWARE
Compuware is a software company based in Detroit that was founded in 1973. Compuware makes products for the Information Technology departments of large businesses.

55. “Brideshead Revisited” surname : RYDER
“Brideshead Revisited” is a novel written by Evelyn Waugh, famously made into British television series starring Jeremy Irons and Anthony Andrews. “Brideshead” was the name of the magnificent estate in the storyline. For the television production, Castle Howardin North Yorkshire was used as Brideshead. if you ever get the chance, Castle Howard is for my money, the must-see stately home in England.

56. Product in pink packets : SWEET’N LOW
Sweet’n Low is an artificial sweetener with saccharin as the main ingredient. At least that’s in the US. In Canada the main ingredient is sodium cyclamate. Saccharin was banned in Canada in 1977 due to fears that the sweetener causes cancer. The original studies showing the incidence of cancer in lab rats were eventually shown to be faulty, and so the ban was lifted in 2014.

Down
2. Classic pop : NEHI
The brand of Nehi cola has a name that sounds like “knee-high”, a measure of a small stature. Back in the mid-1900’s the Chero-Cola company, which owned the brand, went for a slightly different twist on “knee-high” in advertising. The logo for Nehi was an image of a seated woman’s stockinged legs, with her skirt pulled up to her knees, to hint at “knee-high”.

3. Try to beat the buzzer? : SWAT
One might swat at a fly that’s annoyingly buzzing around.

5. Bankruptcy declarer of 2013 : DETROIT
The city of Detroit’s economic strength declined at the beginning of the 21st century, resulting in a 25% drop in population between 2000 and 2010. Detroit filed for the country’s largest municipal bankruptcy in history in 2013, facing a debt of $18.8 billion. The city exited bankruptcy at the end of 2014.

7. Some M&M’s : MINIS
M&M’s Minis were introduced in 1996. The minis are smaller versions of the traditional M&M candies, and are sold in tubes rather than bags.

10. Cause of black eyes? : MASCARA
Variations of mascara have been around a long time, and certainly there was a similar substance in use in Ancient Egypt. “Mascara” is a Spanish word meaning “stain, mask”.

23. Rita Hayworth film briefly featured in “The Shawshank Redemption” : GILDA
Rita Hayworth played the quintessential femme fatale in the 1946 movie “Gilda”, in which she starred opposite Glenn Ford.

Rita Hayworth was born in Brooklyn as Margarita Carmen Cansino. Her father was a flamenco dancer from Spain and so his daughter fell naturally into dancing. The family moved to Hollywood where Hayworth’s father set up a dance studio, and there worked with the likes of James Cagney and Jean Harlow. The young Hayworth had a slow start in movies, finding herself typecast because of her Mediterranean features. When she underwent extensive electrolysis to change her forehead and dyed her hair red, she started to get more work (how sad is that?). In 1941 she posed for that famous pin-up picture which accompanied GIs all over the world.

25. Put down, in a way, as a group of rioters : TEAR-GASSED
The technical name for tear gas is a lachrymatory agent, meaning that it causes tearing (“lacrima” is the Latin for “tear”).

26. What plangonologists collect : DOLLS
A plangonologist is a collector of dolls, although it’s a term that I can’t find in a mainstream dictionary. The term derives from the wax doll called a “plaggon” that was used for female roles in Greek theater, as women were not allowed to perform. Over time, “plaggon” became “plangon”, giving us plangonology.

29. Awards show since 1993 : ESPYS
The ESPY Awards are a creation of the ESPN sports television network. One difference with similarly named awards in the entertainment industry is that ESPY winners are chosen solely based on viewer votes.

34. Hearty greeting? : AHOY!
A stereotypical pirate might yell out “Ahoy, me hearty!”

37. Bisque bit : LOBSTER
A traditional bisque is a creamy soup made from crustaceans such as lobster, crab or shrimp. The term “bisque” probably comes from the Bay of “Biscay” off the west coast of France, a nod to the French origin of the soup and its seafood content. So, if you see a vegetable “bisque” in a restaurant, you’ll know that the term is being misused …

38. Biscotto bit : PINE NUT
What we know in this country as “biscotti” are more properly called “biscotti di Prato”. A biscotto is a twice-baked, almond-flavored confection that originated in the Italian city of Prato. Modern versions of biscotti often contain anise or cinnamon in addition to the almond flavoring.

41. One of baseball’s Alous : FELIPE
Felipe Alou is a former professional baseball player and manager. Alou managed the Montreal Expos from 1992 to 2001, and the San Francisco Giants from 2003 to 2006. Alou was born and raised in the Dominican Republic and came to the US to play for the Giants in 1955. Felipe’s brothers Matty and Jesús followed him to the US, and into Major League baseball.

43. One of Chaucer’s pilgrims : REEVE
A reeve was a senior official in the days of Anglo-Saxon England, perhaps a chief magistrate of a town. Famously, a reeve appears in Geoffrey Chaucer’s “Canterbury Tales”. “The Reeve’s Tale” is the third tale in the book.

Geoffrey Chaucer was an English author. He is often referred to as the father of English literature because he established vernacular English as a legitimate language for artistic works, as up to that point authors used French or Latin. Chaucer’s most famous work is actually unfinished, a collection of stories called “The Canterbury Tales”, all written at the end of the 14th century.

44. “Capeesh?” : GET ME?
“Capeesh?” is a slang term meaning “do you understand?” It comes from the Italian “capisce” meaning “understand”.

46. Alveoli, e.g. : SACS
The alveoli are the little air sacs in the lungs of mammals, the site of gas exchange with the blood. Carbon dioxide is taken out of the blood and replaced with oxygen. Isn’t life remarkable?

49. Husband of ancient Rome’s Poppaea Sabina : NERO
The Roman emperor Nero had quite the family life. When Nero was just 16-years-old he married his stepsister, Claudia Octavia. He also had his mother and step-brother executed.

Poppaea Sabina was the second wife of the Emperor Nero. Poppaea was an ambitious and ruthless woman by all accounts.