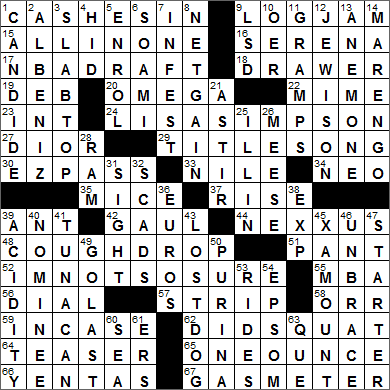 Today’s Wiki-est, Amazonian Googlies
Across
16. Star close to Venus : SERENA
Serena Williams is the younger of the two Williams sisters playing professional tennis. Serena has won more prize money in her career than any other female athlete.

Venus Williams is the older of the two Williams sisters playing professional tennis. In 2002, Williams became the first black woman to earn the World No. 1 ranking by the Women’s Tennis Association.

17. Jordan was part of it in 1984 : NBA DRAFT
Michael Jordan is considered by many to be the greatest basketball player of all time. Not only is Jordan a talented sportsman, but he is also very successful in the business world. He is now the majority owner of the Charlotte Bobcats NBA team.

19. Miss at a party? : DEB
Deb is short for “debutante”, which translates from French as “female beginner”.

27. French Christian : DIOR
Christian Dior was a French fashion designer. As WWII approached, Dior was called up by the French military, drawing a temporary halt to his career in fashion. He left the army in 1942 and for the duration of the war designed clothes for wives of Nazi officers and French collaborators. After the war his designs became so popular that he helped reestablish Paris as the fashion center of the world.

29. “Hair,” for example : TITLE SONG
The full name of the famed show from the sixties is “Hair: The American Tribal Love-Rock Musical”. This controversial work outraged many when it was first performed in the sixties, as it attacked many aspects of life at the time. For example, the song “Air” is a satirical look at pollution, sung by a character who comes onto the stage wearing a gas mask. The opening lines are “Welcome, sulfur dioxide. Hello carbon monoxide. The air … is everywhere”. How things have changed in fifty years said he … satirically …

30. Driver’s convenience : E-ZPASS
E-ZPASS was a technology development driven (pun!) by the tolling agencies of New York, New Jersey and Pennsylvania. The first E-ZPASS toll booth was built on the New York Thruway, and opened at the Spring Valley toll plaza in 1993.

33. Blue ___ : NILE
The Blue Nile and the White Nile are the two major tributaries that form the River Nile.

34. What may be attached to cortexes? : NEO-
The neocortex is part of the brain, the part of the cerebral cortex that is especially large in higher animals.

39. Marvel’s ___-Man : ANT
In the Marvel universe, the original Ant-Man was a scientist who used a drug to change his size, becoming small in scale while increasing his strength.

42. Caesarean section? : GAUL
The Gauls were a Celtic race, with Gaul covering what is now known as France and Belgium. We use the term “Gallic” today, when we refer to something pertaining to France or the French.

44. Alternative to Pantene : NEXXUS
Nexxus is a brand of hair-care products that was developed by Alberto-Culver, and which now is made by Unilever.

“Suit” is a slang term for a business executive or manager.

56. Something people have often been told not to touch : DIAL
Don’t touch that dial! Keep on watching!

57. Gambling mecca, with “the” : STRIP
The Las Vegas Strip is a 4-mile section of Las Vegas Boulevard that is home to many hotels and casinos. Fifteen of the world’s twenty-five largest hotels are located on the Las Vegas Strip.

Captain John Yossarian is the protagonist in Joseph Heller’s novel “Catch 22”. Yossarian’s story is based on the author’s own experiences when stationed in Italy during World War II.

“Catch-22” is a novel by Joseph Heller set during WWII. The title refers to absurd bureaucratic constraints that soldiers had to suffer. Heller’s “Catch 22” was invoked by an army psychiatrist to explain that any pilot requesting to be evaluated for insanity, to avoid flying dangerous missions, had to be sane as only a sane man would try to get out of such missions. The term “catch-22 has entered the language and describes a paradoxical situation from which one can’t escape due to contradictory rules; one loses, no matter what choice one makes.

62. Had zero effect : DID SQUAT
“Squat” is a slang term for “nothing”, and probably has a distasteful derivation that is related to a bodily function.

Down
1. Source of the line “If this is the best of all possible worlds, what are the others?” : CANDIDE
“Candide, ou l’Optimisme” is a 1759 satirical novella by the French philosopher Voltaire. “Candide” was adapted into an operetta with music by American composer Leonard Bernstein.

2. Spanish composer Isaac : ALBENIZ
Isaac Albéniz was a Spanish Catalan pianist and composer. Albéniz is best remembered for creating works built around motifs from Spanish folk music. Although he wrote these works for piano, many have been transcribed for the guitar and are frequently heard today.

9. Hit from the ’60s? : LSD
LSD (colloquially known as “acid”) is short for lysergic acid diethylamide. A Swiss chemist called Albert Hofmann first synthesized LSD in 1938 in a research project looking for medically efficacious ergot alkaloids. It wasn’t until some five years later when Hofmann ingested some of the drug accidentally that its psychedelic properties were discovered. Trippy, man …

Francis Scott Key is remembered mainly as the man who wrote the lyrics to “The Star-Spangled Banner”. Key was a lawyer and amatuer poet from Georgetown, now a neighborhood in Washington, D.C.

12. Norman who directed “In the Heat of the Night” : JEWISON
Norman Jewison is a movie director and actor from Toronto. Jewison was at the helm for many celebrated films, including “The Cincinnati Kid”, “The Russians Are Coming, the Russians Are Coming”, “In the Heat of the Night”, “The Thomas Crown Affair” (1968 version), “Fiddler on the Roof”, “Jesus Christ Superstar”, “Agnes of God”, “Moonstruck” and “The Hurricane”.

14. Served with a sauce of mushrooms, tomatoes, olives, oil and wine : MARENGO
Chicken Marengo is a French dish that is similar to chicken à la Provençale. The former traditionally includes egg and crayfish, although these ingredients are often omitted in contemporary versions. The dish was supposedly created for Emperor Napoleon after the defeat of the Austrian army at the Battle of Marengo that took place south of Turin in Italy.

25. “Sick” : ILLIN’
I am no expert, but my research seems to indicate that “sick” and “illin’” have opposite meanings …

In the world of contemporary slang (that has left me behind some years ago) “illin’” is the opposite of “chillin’” apparently. Illin’ is uncool, not relaxed, a bit crazy perhaps.

26. Attorney general between Smith and Thornburgh : MEESE
Ed Meese was born in Oakland, California just down the road here and spent 24 years in the office of the Treasurer of Alameda County, the county in which I live. After military service, Meese earned himself a law degree at UC Berkeley. Later, as Chief of Staff for President Reagan, he was instrumental in a famous decision to crack down on student protesters at Berkeley which resulted in one protester dying and a two-week occupation of the city by the California National Guard.

William French Smith was US Attorney General for four years in the Reagan administration. After stepping down from office, Smith joined a law firm in Los Angeles, and was also the chairman of the foundation that located the present site for the Ronald Reagan Presidential Library in Simi Valley, California.

36. French bread : EUROS
The “eurozone” or “euro area” is a monetary and economic union within the European Union of 19 states (as of today) that use the euro as a shared legal tender and their sole currency.

39. Nonbasic property : ACIDITY
The “opposite” of an acid is a base. Acids turn litmus paper red, and bases turn it blue. Acids and bases react with each other to form salts. An important subset of the chemicals called bases are the alkalis, the hydroxides of the alkali metals and of ammonium. The term “alkali” is sometimes used interchangeably with “base”, especially if that base is readily soluble in water.

41. Item in many a cat owner’s pantry : TUNA CAN
The word “pantry” dates back to 1300 when it came into English from the Old French “panetrie” meaning a “bread room”. Bread is “pain” in French, and “panis” in Latin.

50. Fancy Feast company : PURINA
Purina began operations in 1894 as an operation for producing feed for farm animals. A few years later, in 1902, the Ralston name was introduced when Webster Edgerly joined the business. Edgerly was the founder of a controversial social movement called Ralstonism. Central to the movement was personal health, with RALSTON standing for Regime, Activity, Light, Strength, Temperation, Oxygen and Nature.

Fancy Feast is a brand of cat food that was introduced by the Carnation Company in 1982.

54. British college : EPSOM
The Surrey town of Epsom in England is most famous for its racecourse (Epsom Downs), at which is run the Epsom Derby every year, one of the three races that make up the English Triple Crown. We also come across Epsom salt from time to time. Epsom salt is magnesium sulfate, originally prepared by boiling down mineral waters. Epsom was indeed a spa town at one time. The town is also home to Epsom College, an English “public school” (which actually means “private, and expensive”). One of Epsom’s “old boys” was the Hollywood actor Stewart Granger.

60. With 13-Down, water dweller that looks like a plant but is actually an animal : SEA
(13D. See 60-Down : ANEMONE)
The name “anemone” means “daughter of the wind” in Greek, and at one time it was believed that the wind was what actually caused the flower to bloom. The sea anemone is named for the terrestrial plant even though it isn’t a plant at all. The sea anemone is a predatory animal found on the ocean floor.

61. Workplaces with many stats, for short? : ERS
Emergency room (ER)