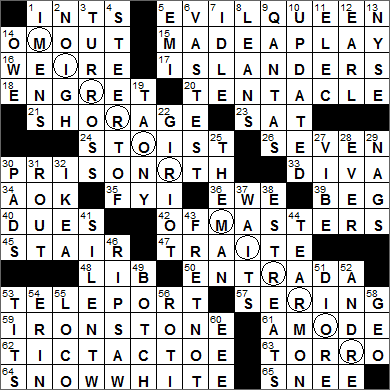 CROSSWORD SETTER: Jason Flinn
THEME: Mirror Mirror … the circled letters in the grid give us two MIRRORS. The answers that “hit” these mirrors “reflect” off them, making a 90-degree turn. So, an across-answer turns down when bouncing off a mirror, and a down-answer turns across. All of these shenanigans are courtesy of SNOW WHITE and the EVIL QUEEN:

5. She queried a magic object named twice in this puzzle’s shaded squares : EVIL QUEEN
In the Grimm fairy tale about Snow White, the evil queen asks her magical mirror, “Mirror, mirror on the wall, who in the land is fairest of all?” The queen is routinely told that she is, until Snow White reaches the age of sixteen, when the answer becomes “Snow White”. And that sparks off a whole boatload of trouble for poor Snow White.

17. 1980-83 Stanley Cup winners : ISLANDERS
The New York Islanders are an NHL team, one of three such franchises in the New York City area (along with the New Jersey Devils and the New York Rangers). When the team was founded in 1972 it was designated as a “Long Island franchise”, and it was expected to take the name the Long Island Ducks, but New York “Islanders” it was to be.

20. Cuttlefish feature : TENTACLE
Cuttlefish are marine animals that are related to squids and octopodes. Cuttlefish have a unique internal shell, and are molluscs, not fish.

26. 1992 Prince song or its peak position in Billboard : SEVEN
The singer Prince was born in Minneapolis, and he lives there to this day. He took his stage name from his father, a jazz musician who used the name Prince Rogers when performing. At one point in his career, Prince used a stage name that was just a symbol that didn’t have a pronounceable name. Later the symbol was dubbed “Love Symbol #2”.

30. Stir stir : PRISON RIOT
The slang word “stir”, meaning a prison, probably has its roots in Start Newgate prison in London, where it was a nickname for the establishment.

33. Tempestuous talent : DIVA
“Diva” comes to us from Latin via Italian. “Diva” is the feminine form of “divus” meaning “divine one”. The word is used in Italy to mean “goddess” or “fine lady”, and especially is applied to the prima donna in an opera. We often use the term to describe a singer with a big ego.

34. In good order : A-OK
Our term “A-OK” is supposedly an abbreviation for “A(ll systems are) OK”, and arose in the sixties during the Space Program.

35. Header on many a forwarded email : FYI
You might see FYI (for your information) or Attn. (attention) at the top of a memo.

42. Darwin’s “The Descent ___” : OF MAN
Englishman Charles Darwin studied medicine at the University of Edinburgh in Scotland but neglected his studies largely due to his interest in nature and natural history. In the early 1830s, a friend put forward Darwin’s name as a candidate for the post of “collector” on the voyage of HMS Beagle. The Beagle was intending to spend two years at sea primarily charting the coast of South America. The voyage ended up taking five years, during which time Darwin sent back copious letters describing his findings. Back in Britain these letters were published as pamphlets by a friend and so when Darwin eventually returned home in 1836, he had already gained some celebrity in scientific circles. It was while on the Beagle that Darwin developed his initial ideas on the concept of natural selection. It wasn’t until over twenty years later that he formulated his theories into a scientific paper and in 1859 published his famous book “On the Origin of the Species”. This original publication never even mentioned the word “evolution” which was controversial even back then. It was in 1871 that Darwin addressed head-on the concept that man was an animal species, in his book “The Descent of Man, and Selection in Relation to Sex”.

48. Pol. affiliation of British P.M. William Gladstone : LIB
William Ewart Gladstone was the leader of the Liberal party and Prime Minister of Britain on four different occasions. Gladstone resigned in 1894. At the time of his resignation he was 84 years old, making him the oldest person to serve in the office.

59. Heavy, durable china : IRONSTONE
Ironstone is a type of pottery that was developed in Staffordshire, England in the early 1800s. It was developed as a less pricey alternative to porcelain. The “iron” in the name is only a reference to the material’s durability, as it contains no iron as such.

62. Winning line : TIC-TAC-TOE
When I was growing up in Ireland we played “noughts and crosses” … our name for the game tic-tac-toe.

63. Former Yankee skipper in the Hall of Fame : TORRE
As a manager, Joe Torre was part of four World Series wins, all of them with the New York Yankees baseball team. Torre is an Italian American who was born in Brooklyn, New York. During the run-up (pun intended!) to the 2006 Winter Olympics in Turin, Torre carried the Olympic flame part of the way through Florence in Italy, handing it over to the next runner at the famous Ponte Vecchio. I’d guess that was quite a thrill for him …

64. Answer provided by the magic object named twice in the shaded squares : SNOW WHITE
“Snow White” is a traditional German fairy tale that was published in 1812 in the collection of the Brothers Grimm. There is also a second, very different Grimms’ Fairy Tale called “Snow White and Red Rose”, not to be confused with its more famous cousin.

65. Bygone sticker : SNEE
“Snick or snee” is the name given to cut and thrust while fighting with a knife. The phrase is rooted in a pair of Dutch words and it gave its name to a “snee”, a light sword-like knife.

Down
2. Bête ___ : NOIRE
“Bête noire” translates from French as “black beast” and is used in English to describe something or someone that is disliked.

4. Third class on the Titanic : STEERAGE
Originally, “steerage” was that part of a ship holding the steering tackle that ran from the rudder up to the tiller or wheel. The steerage area also served as cheap accommodation (with dire conditions) for passengers who could only afford to pay a small amount for travel. This usage evolved into the name of the cheapest class of ticket even when amenities improved on board.

5. Former Big Four record company : EMI
The Big Four recording labels were (until EMI was broken up in 2012 and absorbed by what became “the Big Three”):

6. Like Russia, of all countries : VASTEST
The largest countries in the world by area are, in order:

9. Longtime sponsor of the Socceroos national soccer team : QANTAS
QANTAS is the national airline of Australia. The company name was originally an acronym for Queensland and Northern Territory Aerial Services.

The Australian national soccer team is nicknamed the Socceroos, a play on the word “kangaroo”.

13. Business page heading : NYSE
The roots of the New York Stock Exchange (NYSE) go back to 1792 when a group of 24 stock brokers set up the New York Stock & Exchange Board. They did so in an agreement signed under a buttonwood tree outside 68 Wall Street. That document became known as the Buttonwood Agreement.

19. Many an “I Ching” user : TAOIST
The “I Ching” is an ancient Chinese text dating back to the 2nd millennium BC. The text deals with aspects of cosmology and divination, and perhaps served as a guide for making predictions of the future. The statements in the “I Ching” consist of 64 hexagrams, sets of six lines composed in horizontal stacks.

25. Annual Augusta event : THE MASTERS
Golf’s Masters Tournament is the first of the four major championships in the annual calendar, taking place in the first week of April each year. It is played at Augusta National Golf Club in Georgia, and has a number of traditions. One is that the winner is awarded the famous “green jacket”, but he only gets to keep it for a year and must return it to the club after twelve months.

32. International company with an acronymic name : IKEA
The furniture chain IKEA was founded by Ingvar Kamprad in 1943, when he was just 17-years-old. IKEA is an acronym that stands for Ingvar Kamprad Elmtaryd Agunnaryd (don’t forget now!). Elmtaryd was the name of the farm where Ingvar Kamprad grew up, and Agunnaryd is his home parish in Sweden.

37. John with the 1984 #1 hit “Missing You” : WAITE
John Waite is a singer-songwriter from England. Waite most successful release is the 1841 number-one hit “Missing You”. Waite lived from many years in New York City and now lives in Santa Monica, California.

38. Latino star once named one of “The 10 sexiest bachelors in the world” by People magazine : ESTRADA
Actor Erik Estrada got his big break in the movie “Airport 1975”, before playing motorcycle police officer Poncherello on the television show “CHiPs” from 1977-81.

41. Wrong start? : SILENT W
There is a silent letter W at the start of the word “wrong”.

46. Shop tool : RIP SAW
In woodworking, a cut across the grain is known as a cross cut. A cut along the grain is called a rip cut. Most saws are designed to perform the best cross cuts, but there is a special rip saw that more easily cuts straight lines along the grain.

51. Certain bulb component : DIODE
A Light Emitting Diode (LED) is a specialized form of semiconductor that when switched on releases photons (light). LEDs were used in early digital watches, and are getting more and more popular even though their use in electronic equipment is fading away. LEDs are used now as a replacement for the much less efficient tungsten light bulb. I replaced all of my tungsten Xmas lights a few years ago and saved a lot on my electricity bill.

52. Man: Prefix : ANDRO-
“Andro-” is a prefix meaning male, as in “androgen”, a steroid hormone that controls the development of masculine characteristics.

54. Home of the Lia Fáil : ERIN
The “Lia Fáil” is the coronation stone that is found on the Hill of Tara, the traditional seat of the High Kings of Ireland. “Lia Fáil” translates from Irish as “stone of destiny”.

55. Unhinged : LOCO
In Spanish, if one isn’t sane (sano) one might be described as crazy (loco).

56. Pita-like bread : ROTI
In an Indian restaurant, naan bread is very popular. Roti is the unleavened cousin to naan.

58. Former G.M. make : GEO
Geos were small vehicles manufactured by General Motors mainly in the nineties. Geos were designed to compete head-to-head with the small imports that were gaining market share at the time in the US. Some Geo models that you might remember are the Metro, the Prizm and the Storm. The cars were actually built as joint-ventures with Japanese manufacturers. The Prizm was a GM/Toyota project, the Metro was GM/Suzuki, and the Storm was GM/Isuzu.