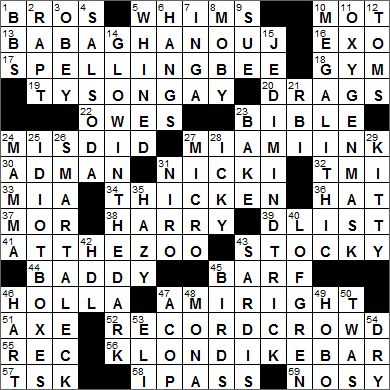 Happy Fourth of July, everyone!

Today’s Wiki-est, Amazonian Googlies
Across
10. Zinger : MOT
“Bon mot” translates from French as “good word”. We use “bon mot” (and sometimes just “mot”) to mean a quip, a witticism.

13. Staple of Mediterranean cuisine : BABA GHANOUJ
Baba ghanoush (also baba ghanouj) is an Arab dish with the main ingredient of mashed eggplant. It is sometimes served as a (delicious) dip.

16. Prefix with biology : EXO-
Exobiology is the study of life in the universe, and central to the work of exobiologists is the search for life beyond earth. A fascinating field, I would imagine …

17. Character-building event? : SPELLING BEE
Back in 18th-century America, when neighbors would gather to work for the benefit of one of their group, such a meeting was called a “bee”. The name “bee” was an allusion to the social nature of the insect. In modern parlance, a further element of entertainment and pleasure has been introduced, for example in a “quilting bee”, or even a “spelling bee”.

19. He became the fastest sprinter in the U.S. in 2009 : TYSON GAY
Tyson Gay is an American sprinter who is currently the second-fastest man in the world over 100m, with only Usain Bolt recording a better time.

23. Job holder? : BIBLE
The story of “the patience of Job” is told in the Book of Job in the Bible. Job exhibits great patience in refusing to condemn God after Satan was allowed to destroy his family and property.

27. Former TLC reality show set in a Florida tattoo parlor : MIAMI INK
“Miami Ink” is yet another reality show, this one set in a tattoo parlor in Miami Beach. And guess what? It’s a franchise now, with versions called “LA Ink”, “London Ink”, “NY Ink” and “Madrid Ink”.

31. “Super Bass” singer Minaj : NICKI
Nicki Minaj is a rapper from Queens, New York who was born in Trinidad.

32. Inappropriate detail, for short : TMI
Too Much Information (TMI)

36. Ring-toss item? : HAT
One might toss one’s hat in the ring, take up the challenge, show willingness to vie for a position perhaps.

37. Neighbor of W. Sahara : MOR
Morocco is lies just 9 miles south of Spain, across the Straits of Gibraltar in the Mediterranean Sea.

38. Badger : HARRY
“To badger” is to harass. The term comes from the cruel practice of “badger-baiting”, which dates back to medieval times. Badger-baiting is a blood sport in which a dog is used as “bait” for a badger in its den, to draw him out into the open. The den is an artificial structure built to resemble a natural badgers’ den, complete with a tunnel entrance. The dog is sent down the tunnel causing the badger and dog to lock their jaws on each other. The badger and dog are then removed from the den by pulling on the dog’s tale. I am ashamed to say that badger-baiting is still practiced (illegally) in Ireland, with ten convictions in the courts over the past 20 years.

41. Where “giraffes are insincere,” in a Simon & Garfunkel hit : AT THE ZOO
“At the Zoo” was written by Paul Simon, and released by Simon and Garfunkel in 1967. The song is a homage to the Central Park Zoo in Simon’s native city of New York. He released a children’s book in 1991 that uses the lyrics of the song as a text, with detailed illustrations. Simon made some changes, dropping the drug references in consideration of his audience …

44. Dr. No or Mr. Hyde : BADDY
“Dr. No” may have been the first film in the wildly successful James Bond franchise, but it was the sixth novel in the series of books penned by Ian Fleming. Fleming was inspired to write the story after reading the Fu Manchu tales by Sax Rohmer. If you’ve read the Rohmer books or seen the films, you’ll recognize the similarities between the characters Dr. No and Fu Manchu.

Robert Louis Stevenson’s novella “The Strange Case of Dr. Jekyll and Mr. Hyde” was first published in 1886. There are many tales surrounding the writing of the story including one that the author wrote the basic tale in just three to six days, and spent a few weeks simply refining it. Allegedly, Stevenson’s use of cocaine stimulated his creative juices during those few days of writing.

51. Pink slip : AXE
The term “pink-slip” can be used as a verb meaning “to terminate an employee”. No one really seems to know for sure where the term originated, but there are lots of stories.

56. Treat with a polar bear in its logo : KLONDIKE BAR
The delicious treat made from an ice cream square covered with chocolate is actually called a “Klondike”, not a “Klondike Bar”.

4. Stain-removing compound : SAL SODA
Sodium carbonate is a well known as a water softener sold for use in laundry, and is variously described as Sal Soda, Washing Soda and Soda Crystals.

7. Actress Cadranel of TV’s “Lost Girl” : INGA
Inga Cadranel is an actress from Canada who is best known for her television roles, in such shows as “Lost Girl” and “Orphan Black”.

10. Like Stonehenge : MEGALITHIC
The magnificent Stonehenge monument in the south of England was built from 3000 to 2000 BC. “Stonehenge” has given its name to “henges”, a whole class of earthwork monuments that are circular in form with an internal ditch surrounded by a bank. Paradoxically, Stonehenge doesn’t qualify as a henge by this contemporary definition, as its earthen bank is surrounded by an external ditch.

12. ___ River, N.J. : TOMS
The Township of Dover, New Jersey was renamed to the Township of Toms River in 2006. Toms River makes appearances on the small and large screens quite a lot, for example in “Jersey Shore”, “Boardwalk Empire” and “The Amityville Horror”.

14. Like some rave accessories : GLOW-IN-THE-DARK
As you might imagine, I’ve never been to a rave, and don’t have one upcoming in my diary. And as raves often start at 2 a.m. then I’m unlikely ever to experience one. A rave is generally an all-night party featuring loud, electronically-synthesized music usually played by a DJ as opposed to a live band.

15. Skill used by Obi-Wan Kenobi : JEDI MIND TRICK
The Jedi are the “good guys” in the “Star Wars” series of movies. The most famous Jedi knights from the films are Obi-Wan Kenobi (played by Alec Guinness, and later Ewan McGregor) and Yoda (voiced by Frank Oz).

In baseball, a squeeze play is one in which a batter bunts the ball expecting to be thrown out at first, but gives a runner at third base a chance to score. In a safety squeeze the runner at third waits to see where the bunt is going before heading for home. In a suicide squeeze, the runner heads home as soon as the pitcher throws the ball.

24. With 33-Across, musical set on the island of Kalokairi : MAMMA
(33A. See 24-Down : MIA!)
Skopelos is a Greek island off the Aegean coast, in the island group known as the Northern Sporades. Skopelos was the island featured in the film version of the ABBA musical “Mamma Mia!”, although in the movie it was given the name Kalokairi.

26. Wise one : SMART ALECK
Apparently the original “smart Alec” (sometimes “Aleck”) was Alec Hoag, a pimp, thief and confidence trickster who plied his trade in New York City in the 1840s.

29. Pool in a casino : KITTY
The “pot” in a card game has been referred to as the kitty since the 1880s. It’s not certain how the name “kitty” evolved but possibly it came from “kit”, the necessary equipment for the game.

Robert De Niro is noted for his longtime and highly successful collaboration with the director Martin Scorsese. He is also noted for his commitment as a method actor. Famously, De Niro gained a full 60 pounds in order to play Jake Lamotta in the 1980 movie “Raging Bull”.

40. Longtime E Street Band guitarist : LOFGREN
The musician Nils Lofgren was a member of Bruce Springsteen’s E Street Band for over 25 years. Lofgren provided vocals and played guitar, and was hired as the replacement for Steven Van Zandt.

The E Street Band is the backing group for Bruce Springsteen. The band came together in 1972 but didn’t take a formal name until two years later. The keyboard player in the original line up was David Sancious, and his mother allowed the group to rehearse at her home. That home was on E Street in Belmar, New Jersey, and that’s where the band got their name.

42. Cholesterol panel letters : HDL
HDL (high-density lipoprotein) is a compound that is used to transport fats around the body. When HDL is combined with (i.e. is transporting) cholesterol, it is often called “good cholesterol”. This is because HDL seems to remove cholesterol from where it should not be, say on the walls of arteries, and transports it to the liver for reuse or disposal. Important stuff …

43. Eatery known for its celebrity caricatures : SARDI’S
Sardi’s is a renowned restaurant in the Theater District of Manhattan that was opened in 1927 by Italian immigrant Vincent Sardi, Sr. Sardi’s is famous for attracting celebrities who pose for caricatures that are then displayed on the restaurant’s walls. After the death of actress and director Antoinette Perry in 1946, her friend and partner Brock Pemberton was having lunch at Sardi’s and came up with idea of a theater award that could be presented in Perry’s honor. The award was to be called the Tony Award.

46. Either of two married supersleuths of 1970s-’80s TV : HART
“Hart to Hart” is a romantic mystery TV series that originally aired from 1979 to 1984. The title characters are a wealthy couple who like to play amateur detectives. Jonathan and Jennifer Hart are played by Robert Wagner and Stefanie Powers. The original choice for the role of Jonathan was Cary Grant, who was 75 years old at the time of casting. When the younger Wagner was picked, the first choice for the role of Jennifer was Natalie Wood, Wagner’s real-life wife. And, the show was created by author and TV writer Sidney Sheldon.

47. Rent-___ : A-COP
“Rent-a-cop” is a derogatory term for a security guard. The term was used in 1988 as the title for a much-panned comedy-action film starring Burt Reynolds and Liza Minnelli. Minnelli was named Worst Actress at the 1988 Golden Raspberry Awards for her performance in “Rent-A-Cop”, and also for “Arthur 2: On the Rocks” that came out the same year.

49. Type tending to drift : HOBO
No one seems to know for sure how the term “hobo” originated, although there are lots of colorful theories. My favorite is that “hobo” comes from the first letters in the words “ho-meward bo-und”, but it doesn’t seem very plausible. A kind blog reader tells me that according to Click and Clack from PBS’s “Car Talk” (a great source!), “hobo” comes from “hoe boy”. Hoe boys were young men with hoes looking for work after the Civil War. Hobos differed from “tramps” and “bums”, in that “bums” refused to work, “tramps” worked when they had to, while “hobos” traveled in search of work.