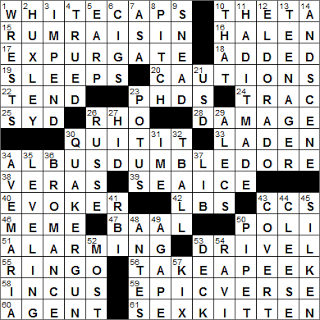 Today’s Wiki-est, Amazonian Googlies
Across
1. Shore sights on a windy day : WHITECAPS
Whitecaps are ocean waves that have a breaking crest that is white in color.

10. Letter accompanying sin? : THETA
The Greek letter theta is commonly used in geometry to represent the angle between two lines (say at the corner of a triangle).

16. Van ___ : HALEN
Van Halen is a heavy metal band formed in Pasadena, California back in 1972. Brothers Eddie and Alex Van Halen originally called the band Mammoth, changing the name to Van Halen in 1974 when they found out there was another Mammoth playing the circuit. Early on, the brothers were renting a sound system from David Lee Roth, and they decided to save some money by bringing him into the band and saving on the rental fee!

17. Clean up, as text : EXPURGATE
“To expurgate” is to remove material from a text that is deemed objectionable. The term derives from the Latin “expurgare” meaning “to purify, clean out”.

23. Goals of some candidates : PHDS
PhD is an abbreviation for “philosophiae doctor”, Latin for “teacher of philosophy”.

26. Density symbol : RHO
Rho is the Greek letter that looks just like our Roman letter “p”. Rho is the symbol used for density, i.e. mass/volume.

33. Weighed down : LADEN
The verb “lade” meaning “to load” comes from an Old English word “hladan”. Lade also used to mean “to draw water” and indeed gave us our word “ladle”. So “lade” and “ladle” are close cousins.

34. School head in a best-selling series of novels : ALBUS DUMBLEDORE
Professor Albus Dumbledore is the headmaster of the school for wizards called Hogwarts, in the Harry Potter universe. The “Harry Potter” books were written by J. K. Rowling, and she chose the name Dumbledore as it is an Early English word for a bumblebee. Apparently she pictured him wandering around, humming to himself.

38. Aloe ___ (some succulents) : VERAS
Aloe vera has a number of alternate names that are descriptive of its efficacy as a medicine. These include the First Aid plant, Wand of Heaven, Silent Healer and Miracle Plant.

42. Abbr. in a birth announcement, often : LBS
The unit of mass that we know today as a “pound” is descended from the old Roman unit of weight known as a “libra”. That “libra” connection is why we abbreviate “pound” to “lb”. The name “pound” though comes from the Latin “pondo” meaning “weight”. Our term “ounce” comes from the Latin “uncia”, which was 1/12 of a Roman “libra”.

46. Many a Facebook repost : MEME
A “meme” (short for “mineme”) is a cultural practice or idea that is passed on verbally or by repetition from one person to another. The term lends itself very well to the online world where links, emails, files etc. are so easily propagated.

47. False god : BAAL
The name “Baal” was used for several gods and sometimes human officials by ancient Semitic peoples. In the Hebrew Bible, Baal is notably cited as a false god. As a result, we sometimes use the term “baal” today to mean a false god or an idol.

55. Rock star’s nickname derived from his jewelry : RINGO
Ringo Starr’s real name is Richard Starkey. Before he joined the Beatles (replacing drummer Pete Best), Starkey played with the Raving Texans. It was with the Raving Texans that he adopted the name “Ringo Starr”, because he wore a lot of rings and he thought it sounded “cowboyish”. Back then his drum solos were billed as “Starr Time”.

58. Ear bone also known as the anvil : INCUS
The middle ear is the portion of the ear immediately behind the eardrum. The middle ear contains three small bones called the ossicles, the three smallest bones in the human body. The ossicles’ job is to transmit sound from the outer ear to the inner ear. The shape of the bones gives rise to their names: the hammer (malleus), anvil (incus) and stirrup (stapes).

59. Genre of the “Odyssey” : EPIC VERSE
“The Odyssey” is one of two epic poems from ancient Greece that is attributed to Homer. “The Odyssey” is largely a sequel to Homer’s other epic, “The Iliad”. “The Odyssey” centers on the heroic figure Odysseus, and his adventures on his journey home to Greece following the fall of Troy.

61. Coquettish sort : SEX KITTEN
A “coquet” is a male flirt, with “coquette” being a female flirt. The word comes from French, and is the diminutive of “coq”, the word for a cock. A cock might well be accused of “strutting his stuff” around the chicken run.

Down
1. Extracts : WRESTS
The verb “to wrest” can mean to obtain by violent twisting and pulling. The word “wrest” derives from the Middle English “wresten” meaning “to twist”. Our word “wrestling” has the same etymology.

5. Kurt Russell’s role in “Tombstone” : EARP
The legendary Western gunfighter and lawman Wyatt Earp has been portrayed on the big and small screen many, many times. Kevin Costner played the title role in 1994’s “Wyatt Earp”, and Val Kilmer played Earp in 2012’s “The First Ride of Wyatt Earp”. Joel McCrea had the part in 1955’s “Wichita”, and Kurt Russell was Earp in 1993’s “Tombstone”.

8. Spiel : PITCH
A spiel is a lengthy speech or argument designed to persuade, like a sales pitch. “Spiel” comes to us from German, either directly (“spiel” is the German for “play”) or via the Yiddish “shpil”.

9. Three-time P.G.A. Championship winner : SNEAD
Sam Snead was probably the most successful golfer never to win a US Open title, as he won a record 82 PGA Tour events. He did win seven majors, but never the US Open. He was also quite the showman. He once hit the scoreboard at Wrigley Field stadium with a golf ball, by teeing off from home plate.

12. Poe poem that begins “Gaily bedight, / A gallant knight” : ELDORADO
“Eldorado” is an Edgar Allan Poe poem that was first published in 1849. The poem tells of a gallant knight who spends much of his life in search of the legendary “Lost City of Gold” called El Dorado.

13. Joan of Arc, at the time of her death : TEENAGER
Joan of Arc (also Jeanne d’Arc, her birth name) led the French Army successfully into battle a number of times during the Hundred Years War with England. When she was eventually captured, Joan was tried in Rouen, the seat of the occupying English government in France at that time. There she was burned at the stake having been found guilty of heresy. Joan of Arc was canonized some 600 years later, in 1920, and is now one of the patron saints of France.

21. Alternative to EUR : USD
An alternative currency to the euro (EUR) is the US dollar (USD).

President Barack Obama has his own Twitter account, one that he actually uses himself (and is not managed by some staffer). The name of the account is @POTUS. President Obama’s first tweet, sent out in May 2015, was:

26. Charlotte ___ (cream-filled dessert) : RUSSE
Charlotte Russe is a cold dessert consisting of Bavarian cream set in a mold layered with ladyfingers. The dessert was named by its creator in honor of Princess Charlotte, daughter of British King George IV, and in honor of Czar Alexander I of Russia (“russe” is French for “Russian”).

29. Guinness and others : ALECS
Sir Alec Guinness played many great roles over a long and distinguished career, but nowadays is best remembered (sadly, I say) for playing the original Obi-Wan Kenobi in “Star Wars”.

30. Wood painted to look like a cannon : QUAKER GUN
A “Quaker Gun” is a fake cannon that was used to deceive the enemy in the 1700s and 1800s. Quaker guns were simply wooden logs that were painted black to resemble cannons. The idea was to trick the enemy into believing that a particular position was more heavily fortified than was the real situation.

31. The Beatles’ “___ Mine” : I ME
“I Me Mine” is one of the relatively few Beatles songs to have been written by George Harrison (and indeed performed by him). Harrison chose the same title for his autobiography, published in 1980 just a few weeks before John Lennon was assassinated in New York City.

34. Solo at many a wedding : AVE MARIA
“Ave Maria” (“Hail Mary” in English) is the prayer at the core of the Roman Catholic Rosary, which itself is a set of prayers asking for the assistance of the Virgin Mary. Much of the text of the “Hail Mary” comes from the Gospel of Luke. The words in Latin are:

In baseball, the line square is a summary set of statistics for the game. It is seen at every baseball stadium, and includes the number of runs scored by each team per innings, as well as the total number of hits and errors. The more comprehensive box score includes the line score, but also shows the individual performance of each player.

44. Sir Lancelot portrayer of 1975 : CLEESE
The magnificent actor and comedian John Cleese came to the public’s attention as a cast member in the BBC’s comedy sketch show “Monty Python’s Flying Circus”. Cleese then co-wrote and starred in the outstanding sitcom “Fawlty Towers”. He even had a role in two “James Bond” films.

“Monty Python and the Holy Grail” was released as a movie in 1975, and was a great success. Some thirty years later the film’s storyline was used as inspiration for the hit musical “Spamalot”. I saw “Spamalot” recently and wasn’t that impressed. But, mine was very much a minority opinion …

49. Love of one’s fellow man, to Greeks : AGAPE
In ancient Greek there were three words that translated as “love”.

– “Agape” … the love of family, of a spouse, of God, of one’s fellow man
– “Philia” … a non-sexual affection, a friendship, a brotherhood
– “Eros” … an affection of a sexual nature

50. Lab tube : PIPET
A pipette (also “pipet”) is tool used in a lab to transport an accurately measured volume of liquid. Back in my day, we would suck up the liquid into the pipette by applying our mouths to the top of the instrument. This could be quite dangerous, as one ended up with a mouthful of something unsavory if one lifted the top of pipette out of the liquid too soon. Nowadays, things are much safer.

52. Guinness superlative : MOST
“The Guinness Book of World Records” holds some records of its own. It is the best-selling, copyrighted series of books of all time and is one of the books most often stolen from public libraries! The book was first published in 1954 by two twins, Norris and Ross McWhirter. The McWhirter twins found themselves with a smash hit, and eventually became very famous in Britain hosting a TV show based on world records.

54. Sitarist Shankar : RAVI
Ravi Shankar was perhaps the most famous virtuoso (to us Westerners) from the world of Indian classical music, and was noted for his sitar playing. Also, Shankar was the father of the beautiful pop singer Norah Jones.

57. Purchase that’s puffed : KIX
Kix cereal has been around since 1937, would you believe? Kix used to be just puffed grains, processed to give the characteristic shape. Then the decision was made to add sugar to get better penetration into the young kid marketplace. Sad really …