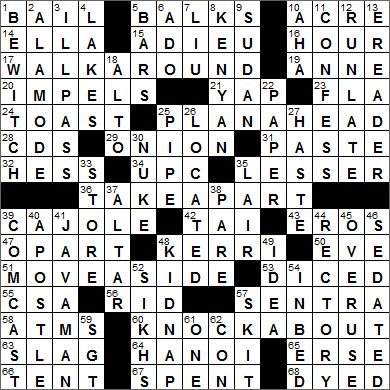 CROSSWORD SETTER: Lynn Lempel
THEME: A-lternative Meanings … each of today’s themed answers looks like a common two-word phrase, with the second word starting with A. But, the clue has been written so that the answer is three words, with A being the middle word:

Today’s Wiki-est, Amazonian Googlies
Across
5. Commits a pitching infraction : BALKS
To balk is to stop and refuse to go on. It’s not just a baseball term …

10. One of the 40 in a farmer’s “back 40” : ACRE
In the Public Land Survey System, land right across the country is divided into townships and sections. A section is roughly equivalent to a square mile, 640 acres. It became the practice to refer to quarter-quarter divisions of a section, with a quarter of a quarter of a section being equal to 40 acres (check the math!). From this sprung phrases like “lower 40” (nominally the lowest elevation 40 acres on a property) and the “back 40” (nominally a 40 acre parcel that was undeveloped on a property, “out the back”).

14. Singer Fitzgerald : ELLA
Ella Fitzgerald, the “First Lady of Song”, had a hard and tough upbringing. She was raised by her mother alone in Yonkers, New York. Her mother died while Ella was still a schoolgirl, and around that time the young girl became less interested in her education. She fell in with a bad crowd, even working as a lookout for a bordello and as a Mafia numbers runner. She ended up in reform school, from which she escaped, and found herself homeless and living on the streets for a while. Somehow Fitzgerald managed to get herself a spot singing in the Apollo Theater in Harlem. From there her career took off and as they say, the rest is history.

23. Miami’s home: Abbr. : FLA
The city of Miami in Florida takes its name from the nearby Miami River, which is itself named for the Mayaimi Native American people who lived around nearby Lake Okeechobee.

24. “Here’s to the happy couple!,” e.g. : TOAST
The tradition of “toasting” someone probably dates back to the reign of Charles II, when the practice was to drink a glass of wine to the health of a beautiful or favored woman. In those days, spiced toast was added to beverages to add flavor, so the use of the word “toast” was an indicator that the lady’s beauty would enhance the wine. Very charming, I must say …

25. Design the lav? : PLAN A HEAD (looks like “plan ahead”)
In old sailing ships the toilet area for the regular sailors was located in the forward part (the head) of the ship, hence the term “head” that has been used since then for any toilet on board a boat.

Our word “lavatory” originally referred to a washbasin, and comes from the Latin “lavatorium”, a place for washing. In the 1600s a “lavatory” came to mean a washroom, and in the 1920s a toilet.

32. Gas brand with a green-and-white logo : HESS
The Hess Corporation is an oil company based in New York City. In 1964, the company started selling toy trucks with the Hess logo on them, in Hess gas stations. The company has been selling them every since, bringing out new models just before Christmas. Hess toy trucks have become quite collectible and the old ones can fetch a pretty penny.

34. What a checkout scanner scans, briefly : UPC
UPC stands for Universal Price Code or Universal Product Code. The first UPC-marked item to get scanned in a store was on June 26, 1974 at 08:01 a.m. at Marsh’s supermarket in Troy, Ohio. It was a 10-pack of Wrigley’s Juicy Fruit chewing gum …

39. Wheedle : CAJOLE
“To wheedle” is to influence by flattery for one’s gain. Such a lovely verb, I think …

43. Winged archer of myth : EROS
Eros, the Greek god of love, was also known as Amor.

48. U.S. gymnast Strug who clinched the 1996 team gold on a hurt ankle : KERRI
Kerri Strug is that plucky little gymnast who made an outstanding final vault in the 1996 Atlanta Olympics despite having an injured ankle. I think we all remember her being carried off after her vault in the arms of the US team coach Bela Karolyi.

50. The “madam” in “Madam, I’m Adam” : EVE
The three most famous palindromes in English have to be:

51. Pass the coleslaw or potato salad? : MOVE A SIDE (looks like “move aside”)
The term “coleslaw” is an Anglicized version of the Dutch name “koolsla”, which in itself is a shortened form of “Koolsalade” meaning “cabbage salad”.

55. The South in the Civil War: Abbr. : CSA
The Confederate States of America (CSA) set up government in 1861 just before Abraham Lincoln took office. Jefferson Davis was selected as President of the CSA at its formation and retained the post for the life of the government.

57. Nissan compact : SENTRA
The Nissan Sentra is sold as the Nissan Sunny back in Japan.

64. Vietnam’s capital : HANOI
Hanoi was the capital of North Vietnam, and Saigon the capital of South Vietnam, during the Vietnam War. After the conflict ended, Hanoi was made capital of the reunified state. Saigon, the larger metropolis, was renamed to Ho Chi Minh City.

Down
1. Place a hex on : BEWITCH
“Hexen” is a German word meaning “to practice witchcraft”. The use of the word “hex” in English started with the Pennsylvania Dutch in the early 1800s.

2. Served with ice cream : A LA MODE
In French, “à la mode” simply means “fashionable”. In America, the term has also come to describe a way of serving pie, usually with ice cream, or as I recall from when I lived in Upstate New York, with cheese.

4. Land of 10,000 ___ (Minnesota) : LAKES
An unofficial nickname for the state of Minnesota is “Land of 10,000 Lakes”. That nickname is quite apt as the state is home to almost twelve thousand lakes that are at least ten acres in size.

7. “Kill Bill” actress Lucy : LIU
Lucy Liu is an actress from Queens, New York. Liu’s big break came when she was chosen to play the Ling Woo character in “Ally McBeal”. I liked her in the 2000 film “Charlie’s Angels” but as I am no fan of Quentin Tarantino, I did not enjoy the movie “Kill Bill”. I am having fun watching one of Liu’s more recent projects, in which she plays Jane Watson, one of the two lead characters in the TV crime drama “Elementary”.

8. Nairobi resident : KENYAN
Nairobi is the capital and largest city in the African nation of Kenya. The city is named for the Nairobi River, which in turn takes its name from the Maasai “Enkare Nairobi” meaning “Cool Water”. Nairobi was founded in 1899 as a stop on the Kenya-Uganda railroad, at a time when the country was a British colony.

9. Egypt’s southern neighbor : SUDAN
South Sudan is an African country that gained her independence in 2011, after a split with Sudan. Sadly, the new nation has been ravaged by a civil war since 2013.

39. Internet and cable giant : COMCAST
Comcast is the largest cable company in the United States. Comcast was founded in 1963 as American Cable systems.

40. John, James or Judas : APOSTLE
In the Christian tradition, John the Apostle was one of the twelve followers of Jesus who were called the Apostles. John lived longer than all of the other Apostles and was the only one who did not die a martyr. John wrote the Gospel of John in the New Testament, as well as three Epistles of John and the Book of Revelation.

Judas Iscariot was one of the twelve original apostles who studied with Jesus. Notably, it was Judas who betrayed Jesus for thirty pieces of silver, a transaction that led to the Crucifixion and Resurrection.

41. Human/ape “missing link” found in Indonesia in 1891 : JAVA MAN
Java Man is the popular name given to early human fossils that were found on the island of Java in Indonesia in 18891 and 1892. Java Man is more correctly referred to as Homo erectus erectus. At the time of discovery, these were the oldest human remains that had been found to date. There was a theory held for many years that Java Man represented a “missing link” between apes and humans.

The term “missing link” is usually applied to the concept that there existed some form of animal that is a hybrid between apes and humans. The idea that there was some “ape-man” is discounted these days by the scientific community, which now favors the theory of evolution.

59. The Beatles’ ___ Pepper : SGT
Sgt. Pepper’s Lonely Heart Club Band was the alter-ego of the Beatles and was the title of a famous studio album released in 1967.