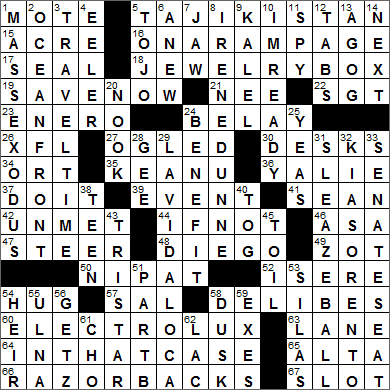 Today’s Wiki-est, Amazonian Googlies
Across
1. Minute bit : MOTE
“Mote” is another word for a speck of dust.

5. Land bordering western China : TAJIKISTAN
The Republic of Tajikistan is a former Soviet Socialist Republic that lies north of Afghanistan and east of China. Most of the country’s people speak Persian and belong to the Tajik ethnic group. Tajikistan is landlocked, with 90% of the republic covered by mountains.

15. Field fraction : ACRE
At one time, an acre was defined as the amount of land a yoke of oxen could plow in a day. This was more precisely defined as a strip of land “one furrow long” (i.e. one furlong) and one furlong wide. The length of one furlong was equal to 10 chains, or 40 rods. A area of one furlong times 10 rods was one rood.

16. Like the Hulk, typically : ON A RAMPAGE
The comic book hero called the Hulk first made an appearance in 1962. The Hulk is the alter ego of reserved and withdraw physicist Bruce Banner. Banner mutates into the Hulk when he gets angry.

18. A cameo may be seen in it : JEWELRY BOX
Cameo is a method of carving, often the carving of a gemstone or a piece of jewelry. The resulting image is in relief (sits proud of the background), whereas an engraved image would be produced by the similar carving method known as intaglio. Nowadays, the term cameo is used for any piece of oval-shaped jewelry that contains the image of a head, usually in profile (maybe even a photograph).

21. Called before getting married : NEE
“Née” is the French word for “born” when referring to a female. The male equivalent is “né”.

23. Part of summer in Latinoamérica : ENERO
In Spanish, the year (el año) starts in January (enero) and ends in December (diciembre).

26. 2001 sports flop, for short : XFL
The XFL was an American Football league that only survived for one season. The intention of the league was to provide football fans with something to watch in the off-season, but the fans didn’t bother. There was discussion when the league was founded that “XFL” would stand for “Extreme” Football League, but the decision was made to let the “X” stand for nothing at all.

35. Laurence co-starred with him in “The Matrix” : KEANU
Keanu Reeves is a Canadian actor whose most celebrated roles were a metalhead in “Bill & Ted’s Excellent Adventure” (1989), a cop in “Speed” (1994) and the main antagonist Neo in “The Matrix” series of films. Although Reeves is a Canadian national, he was born in Beirut, Lebanon. Reeves has some Hawaiian descent, and the name “Keanu” is Hawaiian for “the coldness”.

I’d guess that most famous roles played by actor Laurence Fishburne are Morpheus in “The Matrix” series of movies, and Dr. Raymond Langston on the TV show “CSI”. Fishburne is married to the actress Gina Torres. The pair play a married couple on the TV show “Hannibal”.

36. “Baa! Baa! Baa!” singer : YALIE
The Yale Whiffenpoofs are an a cappella group based in Yale University. They are the oldest such university group in this country, established in 1909. “The Whiffenpoof Song” is the group’s traditional closing number. The song was first performed back in 1909, and has been recorded by many artists including Rudy Vallee and Bing Crosby.

48. Soccer legend Maradona : DIEGO
Diego Maradona has to be the most famous of Argentina’s soccer players. He is also one of the country’s most controversial sportsmen, noted for his outspoken manner with journalists and his cocaine addiction.

49. “B.C.” sound effect : ZOT!
“B.C.” is a comic strip that was drawn by Johnny Hart, and now since Hart’s passing, is produced by his grandson. Hart introduced “B.C.” in 1958. One of the non-human characters in the strip is the Anteater, who sucks up ants with his sticky tongue making a “ZOT” sound. Hart’s Anteater is the inspiration for Peter the Anteater, the team mascot for UC Irvine. Johnny Hart’s other famous comic strip is the brilliant “The Wizard of Id”.

52. River rising in the Graian Alps : ISERE
The Isère river gives its name to the French Department of Isère, located partly in the French Alps. In turn, Isère gave its name to a somewhat famous ship called the Isère, which in 1885 delivered the Statue of Liberty from France to America in 214 shipping crates.

The Graian Alps are a range of mountains in the western Alps, lying in part of France, Italy and Switzerland. The range takes its name from the Graiocceli, a Celtic tribe that lived in the area. The most famous peak in the Graian Alps is probably Mont Blanc.

57. Paradise in fiction : SAL
Jack Kerouac’s “On the Road” is largely autobiographical, telling the story of Sal Paradise (Jack K.) and the road trips that he and his friends took across the country in the fifties.

58. “Sylvia” ballet composer, 1876 : DELIBES
Léo Delibes was a French composer, famous for the ballets “Coppélia” and “Sylvia”, as well as the operas “Le roi l’a dit” and “Lakmé”. There is a Divertissement in Delibes’ “Sylvia” that is probably the most recognized pizzicato in the the whole repertoire.

60. Hoover competitor : ELECTROLUX
Electrolux is a Swedish company, the second largest manufacturer of household appliances in the world (after Whirlpool). The company was founded in 1919 mainly to make vacuum cleaners. Electrolux owns dozens of brands including Frigidaire and Westinghouse.

The first practical portable vacuum cleaner was invented by James Spangler in 1907. Spangler sold the patent for the design to his cousin’s husband, William Henry Hoover. Hoover then made his fortune from manufacturing and selling vacuum cleaners. Hoover was so successful in my part of the world that back in Ireland we don’t use the verb “to vacuum” and instead say “to hoover”, and a hoover is what we call a vacuum cleaner, regardless of who makes it.

63. Strike setting : LANE
Bowling has been around for an awfully long time. The oldest known reference to the game is in Egypt, where pins and balls were found in an ancient tomb that is over 5,000 years old. The first form of the game to come to America was nine-pin bowling, which had been very popular in Europe for centuries. In 1841 in Connecticut, nine-pin bowling was banned due to its association with gambling. Supposedly, an additional pin was added to get around the ban, and ten-pin bowling was born.

66. N.C.A.A. team with the mascot Boss Hog : RAZORBACKS
The athletic teams of the University of Arkansas in Fayetteville are known as the Razorbacks, and sometimes as the Diamond Hogs. The Razorback is a type of pig, a wild hog.

Down
5. Japanese P.M. executed in 1948 : TOJO
Hideki Tojo was a general and the Prime Minister of Japan during most of WWII. Although the attack on Pearl Harbor was planned before he took office, Tojo was the Prime Minister who made the decision to declare war on the US. After Japan surrendered, General MacArthur ordered Tojo’s arrest. Tojo attempted to commit suicide by shooting himself in the heart, but missed. There is a story that while recovering, Tojo was given a set of replacement dentures that were made by an American dentist. Apparently the dentist drilled the message “Remember Pearl Harbor” into the teeth in Morse code. Tojo was hanged for war crimes in 1948.

8. Cary Grant’s “Penny Serenade” co-star : IRENE DUNNE
Irene Dunne was a wonderful, and beautiful, Hollywood actress. She played a variety of roles, but I always think of her as the leading lady with Cary Grant in the movies “The Awful Truth”, “My Favorite Wife” and “Penny Serenade”. Irene Dunne was great friends with fellow actress Loretta Young, and the two often attended church together. Dunne is often described as the best actress never to win an Oscar, even though she was nominated five times for the Best Actress Academy Award.

Cary Grant was an actor from England who made it big, really big in Hollywood. “Cary Grant” is a stage name, chosen by Archibald Leach. There’s a great moment in the film “His Girl Friday” when Grant says the line “I never had so much fun since Archie Leach died”, an inside joke.

“Penny Serenade” is a 1941 film starring Cary Grant and Irene Dunne as a married couple struggling to stay together and raise a child.

9. Infant rocketed to Earth from Krypton : KAL-EL
Jor-El was a scientist on the planet Krypton who was married to Lara. Jor-El and Lara had an infant son named Kal-El who they were able to launch into space towards Earth just before Krypton was destroyed. Kal-El became Superman. In the 1978 movie “Superman”, Jor-El was played by Marlon Brando, Lara was played by Susannah York, and Kal-El/Superman was of course played by Christopher Reeve.

20. New tablet of 2011 : NOOK
The Barnes & Noble electronic-book reader is called the Nook. The Nook accounts for 10-15% of electronic book readers in the world.

29. Subject of a 1999 Ricky Martin hit : LA VIDA LOCA
“Livin’ La Vida Loca” is a 1999 single recorded by Ricky Martin, the title of which translates as “living the crazy life”.

38. Bar mitzvah, e.g. : TEEN
A Jewish girl becomes a Bat Mitzvah at 12 years of age, the age at which she becomes responsible for her actions. Boys become Bar Mitzvahs at 13. The terms translate into English as daughter and son of the commandments.

40. Coat, in old slang : TOG
The verb “tog”, meaning to dress up, comes from the Latin “toga”, the garment worn in Ancient Rome. “Tog” can be use as an informal word for a coat or a cloak. Back in Ireland, togs are what we call swimming shorts.

43. Studio with a horse logo : TRISTAR
TriStar is a subsidiary of Columbia Pictures, founded in 1982 as Nova Pictures. The company logo features Pegasus, the winged horse.

45. Emulate an esne : TOIL
“Esne” is an uncommon word, a synonym for “serf” as best I can tell, a member of the lowest feudal class.

51. Medicare option : PART B
Medicare is divided into four parts:

55. Literally, “elbow” : ULNA
The humerus is the long bone in the upper arm. The bones in the forearm are the radius and ulna. “Ulna” is the Latin word for “elbow”, and “radius” is Latin for “ray”.

56. “The Sound” of music : GETZ
Stan Getz was a jazz saxophonist. Getz’s playing style earned him the nickname “The Sound”.

59. An item no more : EXES
An unmarried couple known to be involved with each other might appear in the gossip columns. This appearance as “an item” in the papers, led to the use of “item” to refer to such a couple, but only since the very early seventies.

61. John who played Sulu in “Star Trek” films : CHO
John Cho is an actor and musician who was born in Seoul, South Korea but who has lived in the US since he was a young boy. Cho’s break in movies came in playing Harold Lee in the ”Harold & Kumar” films. He is now making a name for himself playing Mr. Sulu in the latest “Star Trek” movies.