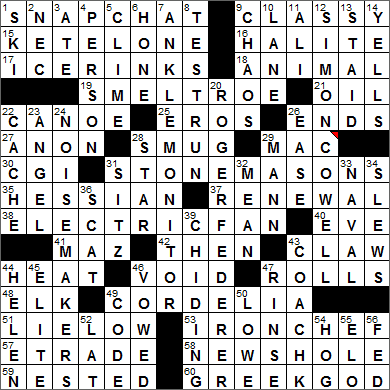 Today’s Wiki-est, Amazonian Googlies
Across
1. Instagram alternative : SNAPCHAT
Snapchat is a messaging system that allows users to send photos and video clips to a limited list of recipients. The photos and clips, called “snaps”, can be viewed for only a few seconds before they are deleted from the recipient’s device and from the Snapchat servers.

15. “Gentlemen, this is vodka” sloganeer : KETEL ONE
Ketel One is a brand of vodka from the Netherlands. The vodka is distilled from wheat in copper pot stills, and “ketel” is Dutch for “pot still”.

16. Melter on winter sidewalks : HALITE
Halite is the mineral form of sodium chloride, and is also known as “rock salt”. Halite is used melt ice, as salt water has a lower freezing point than pure water. Adding salt to icy sidewalks can therefore cause any ice to melt (as long as the ambient temperature isn’t too low). A mixture of halite and ice can also be used to cool things below the freezing point of water, perhaps to make ice cream.

19. Masago, at a sushi bar : SMELT ROE
The Japanese dish called “masago” is actually the roe of the capelin fish. Masago is often mixed with wasabi and served as “wasabi caviar”.

22. Camp vehicle : CANOE
The boat called a canoe takes its name from the Carib word “kenu” meaning “dugout”. It was Christopher Columbus who brought “kenu” into Spanish as “canoa”, which evolved into our English “canoe”.

25. Winged figure of myth : EROS
Eros was the Greek god of love, the Greek counterpart of the Roman god Cupid.

27. Any day now : ANON
“Anon” originally meant “at once” and evolved into today’s meaning of “soon” apparently just because the word was misused over time.

35. Participant in the Battle of Saratoga, 1777 : HESSIAN
The Hessians were German regiments that fought for the British during the American Revolutionary War. They took their name from the homeland of about one third of the men, namely Hesse-Kassel.

43. Hammer part : CLAW
The peen of a hammer is on the head, and is the side of the head that is opposite the striking surface. Often the peen is in the shape of a hemisphere (as in a ball-peen hammer), but usually it is shaped like a claw (mainly for removing nails).

47. Takes turns in a casino : ROLLS
The “casino” originated in the 1700s, first describing a public room for music or dancing. The name “casino” is a diminutive of “casa” meaning “house”.

49. Shakespearean sister : CORDELIA
“King Lear” is one of William Shakespeare’s tragedies. Lear’s three daughters figure prominently in the storyline. The three are, in order of age:

53. Japanese import set in a kitchen : IRON CHEF
“Iron Chef” is a Japanese cooking show that has been aired since 1993. The original Japanese show was dubbed for airing in English-speaking countries and became a surprising hit around the world. There are now spin-off shows around the world including “Iron Chef America” and “Iron Chef UK”.

57. Charles Schwab alternative : E*TRADE
E*Trade is mainly an online discount brokerage. It was founded in 1982 in Palo Alto, California, and I used to drive by its headquarters almost every day. The company is now run out of New York City. E*Trade produces those famous Super Bowl ads with the talking babies staring into a webcam.

Down
2. Big inits. in computing : NEC
NEC is the name that the Nippon Electric Company chose for itself outside of Japan after a rebranding exercise in 1983.

5. Iceland has a cold one : CLIME
Clime is just another word for climate, as in the expression “in search of warmer climes”.

Iceland is the most sparsely populated country in the whole of Europe, with two-thirds of the nation’s population residing in and around the capital city of Reykjavik. Iceland was settled by the Norse people in AD 874, and was ruled for centuries by Norway and then Denmark. Iceland became independent in 1918, and has been a republic since 1944.

7. Flight preventer : ANKLE MONITOR
A person under house arrest often wears an ankle monitor that is used to ensure that he or she does not stray far from home. An alternative system involves random calls to the confined person’s home that have to be answered by the convict. On the face of it, house arrest seems to be a very economic alternative for a society instead of the prison system. As part of the sentence, the convict may even be asked to pay for the cost of monitoring his or her house arrest.

12. Fox hunt leader of old : SIMON COWELL
Simon Cowell was invited to be a judge on “Pop Idol”, a British show that spawned “American Idol”. Cowell was then asked to take part in the US spin-off, and we haven’t stopped seeing him since …

20. Five-in-a-row U.S. Open winner : ROGER FEDERER
Roger Federer is a Swiss tennis player considered by many to be the greatest tennis player of all time. Federer is married to former tennis pro Mirka Vavrinec. The couple are parents to two sets of twins.

22. Private stock : CACHE
A “cache” is a secret supply. We imported the term into English from French Canadian trappers in the 17th century. Back then, “cache” was as slang term for a “hiding place for stores”, derived from the French verb “cacher” meaning “to hide”.

24. Detritus on New Year’s morning : NOISEMAKERS
“Detritus” is the loose material that results from the process of erosion. The usage of the term has evolved to man any accumulated material or debris. “Detritus” is Latin for “a wearing away”.

29. “Buddenbrooks” novelist : MANN
Thomas Mann was a German novelist whose most famous work is probably his novella “Death in Venice”, originally published in German in 1912 as “Der Tod in Venedig”. The story was famously adapted for the big screen in 1971, in a movie starring Dirk Bogarde.

31. ___ bath : SITZ
A “sitz bath” is one in which the water comes up to the hips. It is usually a therapeutic bath used to treat discomfort in the lower part of the body. The term comes from the German “Sitzbad” meaning a bath (bad) in which one sits. “Sitzen” is German for “to sit”.

33. Like the historic Battle of Lepanto, 1571 : NAVAL
The Battle of Lepanto was a 1571 naval battle fought between the Spanish-led Holy League and the Ottoman Empire. It was the last battle in Mediterranean fought entirely between navies using galleys.

36. “Beat it!” : SCAT!
Our word “scat”, meaning “get lost!” comes from a 19th-century expression “quicker than s’cat”, which meant “in a great hurry”. The original phrase probably came from the words “hiss” and “cat”.

43. Leader of five N.C.A.A. basketball championships for Duke, informally : COACH K
Mike Krzyzewski is a coach and former basketball player from Chicago, Illinois. As a young man, Krzyzewski captained the Army Cadets basketball team, before serving in the Army for five years. After resigning from active duty, Coach K (as he is called) eventually took the head coaching job with the Army Cadets followed by the head coach’s position with Duke, where he has been since 1980. Today, Coach K also coaches the US International team.

44. Hunt for a film? : HELEN
Helen Hunt is a very talented actress who first came to national attention playing opposite Paul Reiser in TV’s hit sitcom “Mad About You”. Hunt then starred in some major films including “As Good as It Gets” (for which she won the Best Actress Oscar), “Twister, “Cast Away”, What Women Want” and more recently “The Sessions”. Offscreen, Hunt was married for a while to Hank Azaria, a favorite actor of mine.

46. Gave one’s parole : VOWED
The term “parole” is a French word that we use in English, with the French “parole” meaning “word, speech”. Of particular interest is the French phrase “parole d’honneur” which translates as “word of honor”. In the early 1600s we started using “parole” to mean a promise by a prisoner of war not to escape, as in the prisoner giving his “word of honor” not to run off. Over time, parole has come to mean conditional release of a prisoner before he or she has served the full term of a sentence.

50. Lucius S. ___, hardware chain store eponym : LOWE
Lucius S. Lowe opened the first Lowe’s hardware store in 1921, in North Wilkesboro, North Carolina. Lucius only knew the one store, as it was family who expanded the company after he passed away in 1940.

52. Muscle used in pull-ups, briefly : LAT
The muscles known as the “lats” are the latissimi dorsi, the broadest muscles in the back. “Latissimus” is the Latin for “broadest” and “dorsum” is Latin for “back”.

54. Chopper : HOG
Some modified Harley-Davidson motorcycles were referred to as “choppers”, as the owners would chop of parts that were deemed unnecessary for speed.

55. “A New World Record” grp., 1976 : ELO
If you listen to the song “Rockaria” on the 1976 ELO album “A New World Record”, you’ll hear an “oops”. The introduction to the track features an opera singer who starts the vocals too early in the first take. The band decided to use that first take anyway, complete with the singer saying “oops”.