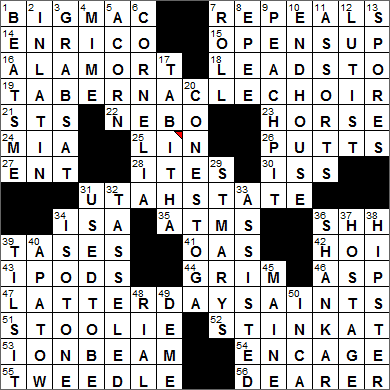 CROSSWORD SETTER: David Kwong
THEME: The Beehive State … the black squares in today’s grid are arranged into eight blocks that resemble the State of Utah. And, we have some answers that refer to the Beehive State:

Today’s Wiki-est, Amazonian Googlies
Across
1. Sandwich introduced in 1968 : BIG MAC
The iconic Big Mac sandwich was introduced nationally by McDonald’s in 1967. It was the creation of a Pittsburgh franchisee who offered it on the menu as a response to the very similar Big Boy sandwich offered by the competing “Big Boy” restaurant chain.

16. Quite ill, in Lille : A LA MORT
The French phrase “à la mort” translates as “to the death”, and is used to mean “mortally ill”.

Lille is a large city in the very north of France sitting right on the border with Belgium. The name “Lille” is a derivation of the term “l’isle” meaning “the island”.

19. Temple Square group founded in 1847 : TABERNACLE CHOIR
The Mormon Tabernacle Choir is a self-funded entity that is part of the Church of Jesus Christ of Latter-day Saints. The choir is known within the church as simply “MoTab”. The choir was founded back in 1847, just a few weeks after the original Mormon pioneers arrived in the Salt Lake Valley.

22. Mount of Moses : NEBO
Mount Nebo is an elevated spot in Jordan that is mentioned in the Bible. According to the Book of Deuteronomy, Moses climbed Mount Nebo from the plains of Moab in order to see the Promised Land, the Land of Israel that he was destined never to enter. According to Christian and some Islamic traditions, Moses was buried on Mount Nebo.

26. Taps on the links : PUTTS
The oldest type of golf course is a links course. The name “links” comes from the Old English word “hlinc” meaning “rising ground”. “Hlinc” was used to describe areas with coastal sand dunes or open parkland. As a result, we use the term “links course” to mean a golf course that is located at or on the coast, often amid sand dunes. The British Open is always played on a links course.

The world-famous “New Yorker” magazine is published by Conde Nast. It was founded back in 1925 by Harold Ross and his wife Jane Grant, a reporter for “The New York Times”. The venerated magazine has become famous for many aspects of its content, including its stylish covers and its cartoons.

31. University suggested by this puzzle’s black squares : UTAH STATE
Utah State University is located in the city of Logan, in the northern part of the state.

41. Hemispheric grp. : OAS
The Organization of American States (OAS) has its headquarters in Washington, D.C. All the independent states in the Americas are members of the group except Honduras, which had its membership suspended after the country’s 2009 coup.

42. ___ polloi : HOI
“Hoi polloi” is a Greek term, literally meaning “the majority, the many”. In English, “hoi polloi” has come to mean “the masses” and is often used in a derogatory sense.

46. Subject for a toxicologist : ASP
The asp is a venomous snake found in the Nile region of Africa. It is so venomous that the asp was used in ancient Egypt and Greece as a means of execution. Cleopatra observed such executions noting that the venom brought on sleepiness without any painful spasms. When the great queen opted to commit suicide, the asp was therefore her chosen method.

47. Young followers : LATTER-DAY SAINTS
Brigham Young was the second President of the Church of Jesus Christ of Latter-Day Saints. Young believed in and practiced polygamy, so he has a large family of descendants. One of his more famous great-great-great-grandsons is Steve Young, the retired quarterback for the San Francisco 49ers.

51. Police reporter? : STOOLIE
Stoolies, also called canaries, will sing to the cops given the right incentive. “Stoolie” is short for “stool pigeon”. A stool pigeon was a decoy bird tied to a stool so as to lure other pigeons. “Stoolies” were originally decoys for the police, rather than informers, hence the name.

55. Entice with music : TWEEDLE
“To tweedle” is to coax, allure. Originally “to tweedle” meant “to sing, whistle”, so today the term can often mean “to coax with music”.

Down
2. Like traditional Masses : IN LATIN
The principal act of worship in the Roman Catholic tradition is the Mass. The term “Mass” comes from the Late Latin word “missa” meaning “dismissal”. This word is used at the end of the Latin Mass in “Ite, missa est” which translates literally as “Go, it is the dismissal”.

6. First wife of Julius Caesar : CORNELIA
Julius Caesar’s first wife was Cornelia, and she had died one year before he married his second wife Pompeia Sulla. Caesar divorced his second wife a few years later as there were unfounded allegations that she was having an affair. Caesar stated at the time that, “my wife ought not even to be under suspicion”, giving rise to the proverb “Caesar’s wife must be above suspicion”.

8. One guarded at the Olympics : EPEE
“En garde” is a French term that has been absorbed into the sport of fencing. Originally a warning “on guard!”, it is spoken at the start of an encounter to warn the fencers to take a defensive position.

9. Part not used when making a cobbler : PEACH PIT
The dessert called “cobbler” originated in colonial America when settlers invented it as a substitute for suet pudding as they didn’t have the necessary ingredients to make the more traditional dish. Instead, they stewed fruit and covered it with a layer of uncooked scones or biscuits, creating a surface that resembled a “cobbled” street, hence the name.

13. Future ferns : SPORES
Spores are produced by many bacteria, fungi and non-flowering plants. A spore is a reproductive body encased in a protective shell that is highly resistant to damage, and resistant to heat in particular.

17. “Bewitched” spinoff : TABITHA
The sitcom “Tabitha” was a big flop, a spin-off of the very successful “Bewitched” series that had finished several years before “Tabitha” aired. The title role was played by Lisa Hartman, who continued with her acting career after “Tabitha” with some degree of success. Hartman is the wife of country music star Clint Black.

20. Prairie transport : CONESTOGA
A Conestoga is a large covered wagon that was used in many of the wagon trains that crossed North America in the late 1700s and early 1800s. The name was taken from the Conestoga Valley near Lancaster, Pennsylvania where the design was developed. The Conestoga wagon resembled a boat on wheels, and often the gaps between the planks were caulked so that it would float when crossing water.

29. Title religious school in a classic Crosby/Bergman film : ST MARY’S
“Going My Way” is a 1944 musical film starring Bing Crosby and Barry Fitzgerald as the incoming and outgoing pastors of a New York City parish. The film was so successful that it spawned a sequel called “The Bells of St. Mary’s” that was released the following year, with Crosby starring opposite Ingrid Bergman.

36. Big name in Indian music : SHANKAR
Ravi Shankar was perhaps the most famous virtuoso (to us Westerners) from the world of Indian classical music, and was noted for his sitar playing. Also, Shankar was the father of the beautiful pop singer Norah Jones.

39. Cheese made from pasteurized cow’s milk : TILSIT
Tilsit cheese was created in the mid-1800s by Prussian-Swiss settlers around the town of Tilsit in former East Prussia. Tilsit is now the city of Sovetsk in Russia.

50. ___ Empire : INCA
The Inca Empire was known as the Tawantinsuyu, which translates as “land of the four quarters”. The Inca Empire was a federal organization having a central government that sat above four “suyu” or “quarters”, four administrative regions.