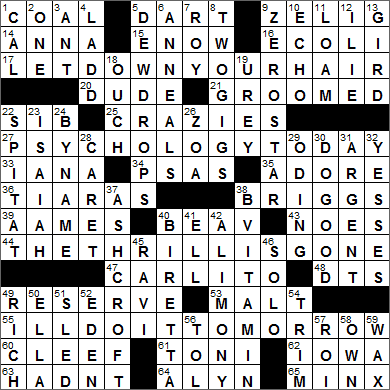 CROSSWORD SETTER: Paula Gamache
THEME: The Result of Waxing … if we take the last word from each of today’s themed answers we arrive at the phrase “HAIR TODAY, GONE TOMORROW”, which might hint at the spa treatment known as WAXING:

17A. Entreaty to Rapunzel : LET DOWN YOUR HAIR
27A. Magazine whose website has a “Find a Therapist” feature : PSYCHOLOGY TODAY
44A. 1970 B. B. King hit : THE THRILL IS GONE
55A. Procrastinator’s promise : I’LL DO IT TOMORROW

Today’s Wiki-est, Amazonian Googlies
Across
9. Woody Allen title role : ZELIG
“Zelig” is a 1983 film by Woody Allen. “Zelig” tells the fictitious story, in documentary style, of Leonard Zelig (played by Allen) who has the gift of being able to change his appearance in order to better fit in with the company he keeps. He becomes famous as a “human chameleon”. By using archive footage, the film includes clever “cameos” by real figures from history (like Calvin Coolidge, Herbert Hoover and Susan Sontag).

16. Cause of some abdominal cramps : E COLI
Escherichia coli (E. coli) are usually harmless bacteria found in the human gut, working away quite happily. However, there are some strains that can produce lethal toxins. These strains can make their way into the food chain from animal fecal matter that comes into contact with food designated for human consumption.

17. Entreaty to Rapunzel : LET DOWN YOUR HAIR
“Rapunzel” is a fairy tale in the collection of the Brothers Grimm. Rapunzel was a maiden who was locked in a tower by an enchantress. The inevitable prince turns up, and he climbs up to Rapunzel using her long, fair hair as a climbing rope.

27. Magazine whose website has a “Find a Therapist” feature : PSYCHOLOGY TODAY
“Psychology Today” is a popular magazine that focuses on behavior and related topics, and has the aim of making psychology literature more accessible to the general public.

38. Myers-___ personality test : BRIGGS
The Myers-Briggs Type Indicator (MBTI) was created in 1962, by Katharine Cook Briggs and her daughter Isabel Briggs Myers. The MBTI has been a popular tool used by businesses and business consultants for decades. The MBTI is built on the theories of Carl Jung and is designed to assess an individual’s personality type and give insight into how that individual interacts with other personality types.

39. Willie of “Eight Is Enough” : AAMES
Willie Aames is an actor from Newport Beach, California. Aames is best known for playing Tommy Bradford on the TV comedy “Eight is Enough” that originally aired in the seventies.

40. Sitcom nickname of Wally’s bro : BEAV
Ward Cleaver and his wife June were the parents of Wally Cleaver and his younger brother “The Beaver”. The four family members appeared in the fifties sitcom “Leave It to Beaver”.

47. ___ Brigante (1993 Pacino role) : CARLITO
“Carlito’s Way” is a 1993 crime film based on two novels by Judge Edwin Torres: “Carlito’s Way” and the sequel “After Hours”. Directed by Brian De Palma, the film stars Al Pacino as Carlito Brigante, an ex-con who intends to go straight but gets dragged back into a life of crime.

48. Withdrawal symptom, in short : DTS
The episodes of delirium that can accompany withdrawal from alcohol are called Delirium Tremens (the DTs). The literal translation of this Latin phrase is “trembling madness”.

53. Germinated grain : MALT
Malt is germinated cereal grains that have been dried. The cereal is germinated by soaking it in water, and then germination is halted by drying the grains with hot air.

60. Van ___ & Arpels (jeweler) : CLEEF
Van Cleef & Arpels is a jewellery, watch and perfume company that is based in France. As perhaps one might expect, the company was founded by a Charles Arpels and an Alfred Van Cleef, back in 1906 in Paris.

61. Author Morrison : TONI
The writer Toni Morrison won the Nobel Prize for Literature in 1993. Amongst other things, Morrison is noted for first coining the phrase, “our first black President”, a reference to President Bill Clinton.

65. Cheeky, flirtatious sort : MINX
A minx is a flirtatious woman. The term derives from the 16th-century word “mynx” used for a pet dog.

Down
1. Old White House nickname : CAL
President Calvin Coolidge, the only US President to have been born on July 4th, was known as a man of few words. It was while he was serving as Vice-President to in the administration of Warren G. Harding, that Coolidge earned the nickname “Silent Cal”. There is a famous story told about Coolidge’s reticence that I would love to think is true, attributed to the poet Dorothy Parker. Sitting beside him at dinner, she remarked to him, “Mr. Coolidge, I’ve made a bet against a fellow who said it was impossible to get more than two words out of you.” His famous reply: “You lose.”

3. Orkin target : ANT
Orkin is a pest-control company. If you want to learn more about insects, you might want to visit the O. Orkin Zoo, a permanent exhibit at the Smithsonian in Washington, D.C. The exhibit has over 300 live insects, all displayed in their natural habitats.

6. Tempers : ANNEALS
One anneals glass or metal by exposing to a very specific temperature profile, resulting in a tougher or less brittle product.

10. Nymph of myth : ECHO
In Greek mythology, Echo is one of the Oreads, the mountain nymphs. Echo fell in love with the vain Narcissus, and followed him into the forest one day. Narcissus heard her following him and called out, “Who’s there?”. Echo answered, “Who’s there?” Again he called out, and again Echo echoed his words back to him. Get the gist?

11. Good earth : LOAM
Loam is soil made up of sand, silt and clay in the ratio of about 40-40-20. Relative to other soil types, loam is is usually rich in nutrients and moisture, drains well and is easy to till. Loam can also be used in constructing houses as it is quite strong when mixed with straw and dried.

13. Encircle : GIRD
The phrase “gird your loins” dates back to Ancient Rome. The expression describes the action of lifting “one’s skirts” and tying them between the legs to allow more freedom of movement before going into battle. Nowadays, “gird your loins” is a metaphor for “prepare yourself for the worst”.

19. 1934 Chemistry Nobelist Harold : UREY
Harold Urey was an American physical chemist who won the 1934 Nobel Prize in Chemistry for his discovery of deuterium, an isotope of hydrogen.

26. Animal group suffix : -ZOA
The suffix “-zoa” is used for groups of animal organisms e.g. protozoa and metazoa. “Zoia” is the Greek for “animals, living beings”.

28. Sticking point? : CARET
I suppose one might use a caret to show the “point” where one should “stick” a punctuation mark …

29. Having too much, informally : ODING
Overdosing (ODing)

31. Silver, in heraldry : ARGENT
In heraldry, “agent” is a silver color used to emblazon a coat of arms. The name comes from the Latin “argentum” meaning “silver”.

37. Attorney general during George W. Bush’s entire first term : ASHCROFT
John Ashcroft served as US Attorney General in the administration of President George W. Bush. Ashcroft is quite the musician and has composed some religious tunes in particular. When he was a member of the US Senate (representing the state of Missouri) he formed a barbershop quartet along with three of his colleagues that was called the Singing Senators.

38. Part of a complex : B VITAMIN
The B vitamins were originally thought to be just one vitamin, which was labeled vitamin B. It was then discovered vitamin B was in fact made up of eight distinct vitamins, which today are given distinct numbers (B1, B6, B12 etc). Supplements often contain a mixture of all eight, a combination known as vitamin B complex.

40. Cardinal’s cap : BIRETTA
A biretta is a type of cap, one with three or four peaks and often a central tuft. Birettas are often worn by the clergy, and are particularly associated with the Roman Catholic tradition.

45. Musician Shankar : RAVI
Ravi Shankar was perhaps the most famous virtuoso (to us Westerners) from the world of Indian classical music, and was noted for his sitar playing. Also, Shankar was the father of the beautiful pop singer Norah Jones.

56. “My mama done ___ me” : TOL’
“My mama done tol’ me” are the first words of the immensely popular standard “Blues in the Night”. The music was written by Harold Arlen and the lyrics by Johnny Mercer, originally for a film of the same name released in 1941.

57. Early resident in the Louvre : ROI
In French, a king and queen (roi et reine) are members of the nobility (noblesse).