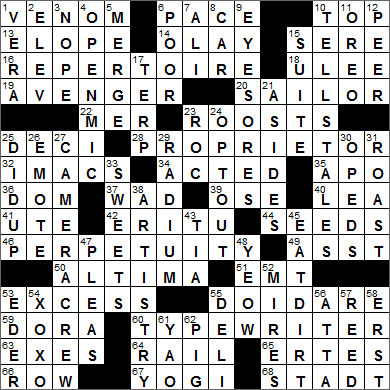 16A. Everything you can perform : REPERTOIRE
28A. Business owner : PROPRIETOR
46A. Time without end : PERPETUITY
60A. Apt example of this puzzle’s theme : TYPEWRITER

14. Brand name that sounds like a cheer : OLAY
Oil of Olay was developed in South Africa in 1949. When Oil of Olay was introduced internationally, it was given slightly different brand names designed to appeal in the different geographies. In Ireland we know it as Oil of Ulay, for example, and in France it is Oil of Olaz.

18. Beekeeper in a 1997 movie : ULEE
“Ulee’s Gold” is a highly respected film from 1997 in which Peter Fonda plays the title role of Ulee. Ulee’s “gold” is the honey that Ulee produces. It is a favorite role for Peter Fonda and he has shared that playing Ulee brought to mind his father Henry Fonda, who himself kept a couple of hives. So if you see Peter Fonda in “Ulee’s Gold” you’re witnessing some characteristics that Peter saw in his father.

19. Marvel’s Thor, Captain America or Iron Man : AVENGER
The Avengers are a team of superheroes in the Marvel Comics universe. The original lineup, which dates back to 1963, consisted of Ant-Man, Hulk, Iron Man, Thor and the Wasp. Soon after their formation, the Avengers rescued Captain America trapped in ice, and thereafter he joined the team. There is a 2012 movie called “The Avengers” that features Iron Man, Captain America, Hulk and Thor.

32. Apples since 1998 : IMACS
The iMac is a desktop computer platform from Apple introduced in 1998. One of the main features of the iMac is an “all-in-one” design, with the computer console and monitor integrated. The iMac also came in a range of colors, that Apple marketed as “flavors”, such strawberry, blueberry and lime.

The initials “G.I.” stand for “Government Issue” and not “General Infantry”, as is often believed. GI was first used in the military to denote equipment made from Galvanized Iron and during WWI, incoming German shells were nicknamed “GI cans”. Soon after, the term GI came to be associated with “Government Issue” and eventually became an adjective to describe anything associated with the Army.

36. Title for a Benedictine : DOM
The word “Dom” is used in the Roman Catholic Church as a title for some monks, including those in the Benedictine order.

41. Beehive State athlete : UTE
The Runnin’ Utes are the basketball team of the University of Utah. The team was given the nickname the Runnin’ Redskins back when Jack Gardner was the head coach from 1953 to 1971. The “Runnin'” part of the name was chosen because Gardner was famous for playing quick offenses. The “Redskins” name was later dropped in favor of the less controversial “Utes”.

42. Verdi aria for a baritone : ERI TU
The aria “Eri tu” is from Verdi’s opera “Un ballo in maschera” (A Masked Ball). The opera tells the story of the assassination of King Gustav III of Sweden during a masked ball.

50. Midsize Nissan : ALTIMA
Nissan has been making the Altima since 1993. In 2007 the company started to produce a hybrid version, Nissan’s first foray into the hybrid market and a successful one by all accounts. Altima hybrids are even used as police cruisers by the New York Police Department.

51. Defib expert : EMT
A defibrillator (defib) might be operated by an Emergency Medical Technician (EMT).

59. Explorer of kidvid : DORA
“Dora the Explorer” is a cartoon series shown on Nickelodeon. Part of Dora’s remit is to introduce the show’s young viewers to some Spanish words and phrases.

60. Apt example of this puzzle’s theme : TYPEWRITER
All the letters in the word “typewriter” appear on the top row of a QWERTY keyboard.

64. Complain loudly : RAIL
To rail at or against something is to complain bitterly about it.

65. Some Deco illustrations : ERTES
I don’t think the artist Erte had any particular link to crosswords, but he sure does turn up a lot in crosswords. “Erte” is a classic example of “crosswordese”.

Art deco is the name given to a style of design and architecture of the 1920s that actually had its roots in Belgium and then spread throughout Europe before arriving in North America. Celebrated examples of art deco architecture are the magnificent Chrysler Building in New York City completed in 1930, and the GE Building that sits in the middle of Rockefeller Center also in New York City, with the address of “30 Rock”.

67. First name in Jellystone Park : YOGI
Yogi Bear made his debut for Hanna-Barbera in 1958, on the Huckleberry Hound Show before he was given his own series. Do you remember that collar that Yogi wore around his neck? That was a little trick from the animators. By using the collar, for many frames all they had to do was redraw everything from the collar up, saving them lots and lots of time. Yogi and Boo Boo lived in Jellystone Park, and made Ranger Smith’s life a misery.

Down
1. Miles of “Psycho” : VERA
Vera Miles is an American actress who has been associated with a few celebrated movies. In 1954 she played Tarzan’s love interest in “Tarzan’s Hidden Jungle” (and ended up marrying “Tarzan”, actor Gordon Scott). Plans for her to play the female lead in “Vertigo” were shelved when she became pregnant. She did get a role in Hitchcock’s “Psycho” though, playing Lila Crane, the woman who discovered the secrets of Norman Bates and his motel.

7. Iraq’s Mosque of ___ (pilgrimage site) : ALI
The Imam Ali Mosque in Najaf, Iraq is a holy site for the Shia branch of Islam. The site is the final resting place of Ali ibn Abi Talib, the cousin and son-in-law of the prophet Muhammad who ruled over the Islamic Caliphate from 656 to 661 CE. Many also believe that the remains of Adam and Noah are buried within the mosque.

11. Stackable snack : OREO
There’s an iPhone app featuring the Oreo cookie. It’s a game in which one twists Oreo cookies apart, “licks” the cream from the center and then dunks the remainder of the cookie in a glass of milk.

17. Maryland athlete, informally : TERP
The sports teams of the University of Maryland are called the Maryland Terrapins, or “the Terps” for short. The name dates back to 1932 when it was coined by the the university’s president at the time, Curley Byrd. He took the name from the diamondback terrapins that are native to the Chesapeake Bay.

23. Mythical predator of elephants : ROC
The mythical roc is a huge bird of prey, reputedly able to carry off and eat elephants. The roc was said to come from the Indian subcontinent. The supposed existence of the roc was promulgated by Marco Polo in the accounts that he published of his travels through Asia.

26. Ham it up : EMOTE
The word “ham”, describing a performer who overacts, is apparently a shortened form of “hamfatter” and dates back to the late 1800s. “Hamfatter” comes from a song in old minstrel shows called “The Ham-Fat Man”. It seems that a poorly performing actor was deemed to have the “acting” qualities of a minstrel made up in blackface.

29. Curie discovery : RADIUM
The element radium was first discovered by Marie and Pierre Curie, in 1898.

Marie Curie lived a life of firsts. She was the first female professor at the University of Paris, the first woman to win a Nobel Prize, and indeed was the first person to win two Nobel prizes (in 1903 and 1911). Most of Curie’s work was in the field of radioactivity, and was carried out in the days when the impact of excessive radiation on the human body was not understood. She died from aplastic anemia, caused by high exposure to radiation. To this day, Curie’s personal papers are kept preserved in lead-lined boxes as they are highly radioactive, even her personal cookbook.

Maureen Dowd is a celebrated columnist for “The New York Times” as well as a best-selling author. Dowd won a Pulitzer for her columns about the Monica Lewinski scandal.

53. River of Hesse : EDER
The Eder is a river in Germany, a tributary of the Fulda River. The Eder has a dam near the small town of Waldeck which holds water in the large Edersee reservoir. This was one of the dams that was attacked by the RAF during WWII with the famous Barnes Wallis bouncing bombs. It was destroyed in the Dam Busters raid in 1943, but rebuilt the same year.

54. Love letter sign-off : XOXO
In the sequence XOX, the X represents a kiss and the O a hug. Hugs and kisses …

55. Carnegie ___ (famous eatery) : DELI
Carnegie Deli in Midtown Manhattan opened in 1937, and is located next to Carnegie Hall. The restaurant is noted for the attitude of its waiters, who are deliberately surly. Carnegie Deli also serves up huge portions, and so the establishment’s motto is apt: if you can finish your eal, we’ve done something wrong.

57. Walter ___ hospital : REED
Walter Reed National Military Medical Center is located in Bethesda, Maryland on a site that was selected by President Franklin D. Roosevelt in 1938. The facility is named for US Army physician Walter Reed who discovered in 1901 that yellow fever is transmitted by mosquitoes rather than by direct contact.

61. Ming formerly of the N.B.A. : YAO
Yao Ming is a retired professional basketball player from Shanghai who played for the Houston Rockets. At 7’6″, Yao was the tallest man playing in the NBA.

62. Source of fatback : PIG
Fatback is a cut of meat from the back of a pig, although there’s not much meat as it’s mostly made up of hard fat.