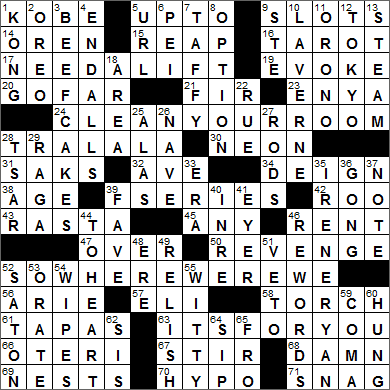 Today’s Wiki-est, Amazonian Googlies
Across
1. Southern Japanese port city : KOBE
Kobe is a city on the island of Honshu in Japan. The city of Kobe is perhaps most famous for its beef, and yes, basketball star Kobe Bryant is named after that very same beef.

14. Israeli conductor Daniel ___ : OREN
Daniel Oren is a conductor who was born in Israel. He is the artistic director of the Verdi Opera House in Salerno, Italy.

16. Means of divination : TAROT
Tarot cards have been around since the mid-1400s, and for centuries were simply used for entertainment as a game. It has only been since the late 1800s that the cards have been used by fortune tellers to predict the future. The list of tarot cards includes the Wheel of Fortune, the Hanged Man and the Lovers.

23. Ireland’s best-selling solo artist : ENYA
Enya’s real name is Eithne Ní Bhraonáin, which can translate from Irish into Enya Brennan. Her Donegal family (in the northwest of Ireland) formed a band called Clannad, which included Enya. In 1980 Enya launched her very successful solo career, eventually becoming Ireland’s best-selling solo musician. And … she sure does turn up a lot in crosswords!

30. ___ Deion (onetime nickname in the N.F.L.) : NEON
Deion Sanders is a former NFL footballer, and a former Major League Baseball player. He is the only person to play in a Super Bowl and in a World Series. And, in the 1989 season Sanders became the only person to hit a major league home run and score an NFL touchdown in the same week. While playing, he earned the nicknames “Neon Deion” and “Prime Time Sanders”.

The Nordstrom chain of fashion stores was founded in 1901 by John W. Nordstrom and Carl F. Wallin as a retailer of shoes, under the name “Wallin & Nordstrom”. The store’s name changed to just “Nordstrom” in 1930, soon after both founders retired and sold their shares to Nordstrom’s two sons.

39. Pickup line? : F-SERIES
Ford has been selling the F-Series line of pickup trucks a long time, since 1948. The F-Series is Ford’s longest-running nameplate, and the best-selling vehicle in the US for the past 32 years.

42. Pal of Pooh : ROO
Like most of the characters in A. A. Milne’s “Winnie the Pooh”, Roo was inspired by on a stuffed toy belonging to Milne’s son Christopher Robin.

43. Dreads sporter : RASTA
I must admit that I don’t really understand Rastafarianism. I do know that a “Rasta”, like Bob Marley, is a follower of the movement. Some say that Rastafarianism is a religion, some not. I also know that it involves the worship of Emperor Haile Selassie I of Ethiopia.

56. Indy racer Luyendyk : ARIE
Arie Luyendyk is a racing driver from the Netherlands, winner of the Indianapolis 500 on two occasions. Luyendyk’s son, also called Arie, is following in his father’s footsteps and is also an auto racer.

57. Horror film director Roth : ELI
Eli Roth is one of a group of directors of horror movies known quite graphically as “The Splat Pack”. I can’t stand “splat” movies and avoid them as best I can. Roth is also famous for playing Donny Donowitz in the Quentin Tarantino movie “Inglourious Basterds”, a good film I thought, if you close your eyes during the gruesome bits.

61. Appetizers that can make up a meal : TAPAS
“Tapa” is the Spanish word for “lid”, and there is no clear rationale for why this word came to be used for an appetizer. There are lots of explanations cited, all of which seem to involve the temporary covering of one’s glass of wine with a plate or item of food to either preserve the wine or give one extra space at the table.

66. “S.N.L.” alum Cheri : OTERI
Cheri Oteri was the SNL cast member who regularly appeared with Will Farrell in the skit featuring a pair of Spartan cheerleaders.

68. Banish to Hades : DAMN
Hades was the god of the underworld to the ancient Greeks. Over time, Hades gave his name to the underworld itself, the place where the dead reside. The term “Hades” was also adopted into the Christian tradition, as an alternative name for hell. But, the concept of hell in Christianity is more akin to the Greek “Tartarus”, which is a dark and gloomy dungeon located in Hades, a place of suffering and torment.

69. Stacks, as matryoshka dolls : NESTS
Matryoshka dolls are those wooden nesting dolls that are on sale at every tourist trap across Russia. “Matryoshka” is Russian for “little matron”.

70. Shot from a doc : HYPO
Something that is “hypodermic” is “under the skin”, from the Greek “hypo-” meaning “under” and “derma” meaning “skin”.

71. Hosiery mishap : SNAG
The word “hose” meaning a “covering for the leg” has the same roots as the contemporary German word “Hose” meaning “trousers, pants”.

3. Hunky guys : BEEFCAKES
It’s not really clear how the “cheesecake” came to be used for a provocative picture of a woman. It is known that the term arose in the 1930s, and originally applied to to the covers of “pulp” magazines that used the images of the attractive young females to attract a largely male audience. One theory is that during the depression years, the luscious cheesecake dessert was unattainable, as were the “luscious” models depicted on the magazine covers. The male equivalent of cheesecake is “beefcake”.

6. Prov. near New Brunswick : PEI
Prince Edward Island (PEI) is a maritime Canadian province. The island at the center of the province was named for Prince Edward, the fourth son of King George III and the father of Queen Victoria.

The Province of New Brunswick takes its name from the city of Braunschweig in Lower Saxony in northern Germany. Braunschweig, known as Brunswick in English, was the ancestral home of the British King George III.

7. Boardwalk treat : TAFFY
Taffy was invented in Atlantic City and is now found all over the US, but primarily in coastal towns (for some reason) and not really outside America. Taffy is made by stretching the solid mass made by boiling up sugar, butter, flavoring, and coloring until it achieves a fluffy texture.

10. Shirley’s TV roommate : LAVERNE
On the late-seventies and early-eighties sitcom “Laverne & Shirley”, Penny Marshall played Laverne (De Fazio) , and Cindy Williams played Shirley (Feeney). The show was a spinoff of “Happy Days”, in which Laverne and Shirley were friends of the Fonz.

The Maine Black Bears are the athletic teams of the University of Maine.

12. “Godzilla” locale : TOKYO
Godzilla is a Japanese creation. The first in a very long series of films was released way back in 1954. The original name in Japanese was “Gojira”, but this was changed to Godzilla for audiences outside of Japan. “Gojira” is a combination of “gorira” and “kujira”, the Japanese words for gorilla and whale, apt because Godzilla is a big ape-like creature that came out of the deep.

13. Manhole emanation : STEAM
On a recent trip to New York City in the winter, it struck me that the steam emanating from the manholes was a peculiarly American phenomenon, and is especially associated with the Big Apple. I’ve never seen such a thing in my travels around the world, so I did a little checking. It seems that the large buildings in New York were traditionally built with large steam heating plants. Excess steam was sold to neighboring buildings and soon the power companies were building central steam generation plants. As a result, there are miles and miles of steampipes snaking across the city. I guess some of the steam leaks out and escapes through the manholes.

26. Congregation’s place : NAVE
In large Christian churches, the nave is the main approach to the altar, where most of the congregation are seated.

27. Street ___ (souped-up cars) : RODS
A “hot rod” is an American car that has been modified for speed by installing a larger than normal engine. A “street rod” is generally a more comfortable type of “hot rod”, with the emphasis less on the engine and more on custom paint jobs and interiors. By definition, a street rod must be based on an automobile design that originated prior to 1949.

28. Ruler of Muscovy : TSAR
The Tsardom of Russia began in 1547 with the crowning of Ivan IV, who later became known as Ivan the Terrible. Prior to the creation of the tsardom, the principality centered on Moscow was known as the Grand Duchy of Moscow, or “Muscovy” in English.

29. Shankar piece : RAGA
Raga isn’t really a type of music, but has been described as the “tonal framework” in which Indian classical music is composed. Ravi Shankar was perhaps the most famous raga virtuoso (to us Westerners).

33. Silent ___ : ERA
The “silent” of film was right at the beginning, when movies were first produced in 1894. The era ended in 1929 when silent movies were ousted by “talking pictures”.

48. Poetic palindrome : ERE
The three most famous palindromes in English have to be:

49. Wiener topper : RELISH
What we call a wiener in this country is known as a Vienna sausage in Germany. It was first produced by a butcher from Frankfurt who was living in Vienna, hence the name “Wiener”, which is German for “of Vienna”. Paradoxically, the same sausage is called a Frankfurter in Vienna, as it was created by someone from Frankfurt. It’s all very confusing …

51. Executive turndown : VETO
“Veto” comes directly from Latin and means “I forbid”. The word was used by tribunes of Ancient Rome to indicate that they opposed measures passed by the Senate.

53. Deliver a stemwinder : ORATE
A stem-winder is type of watch, one that was very desirable in days gone by. The term became associated with “excellence” over the years, and especially with a rousing speech.

60. Unable to decide, in court : HUNG
As in “hung jury”, a jury that cannot reach a verdict.

65. Early Jackson 5 ‘do : FRO
The Jackson 5 singing group was originally made up of brothers Tito, Jackie, Jermaine, Marlon and Michael.