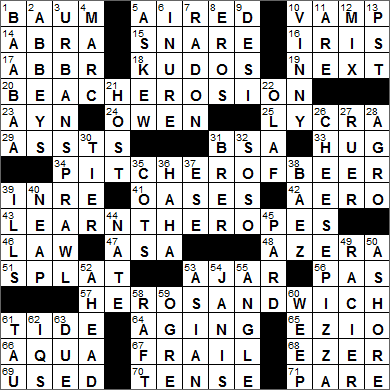 CROSSWORD SETTER: Bruce Haight
THEME: Hero Sandwich … each of today’s themed answers contains the hidden word HERO SANDWICHED between the rest of the letters in the answer:

20A. Problem caused by ocean storms : BEACH EROSION
34A. Bar order for the whole table : PITCHER OF BEER
43A. Pick up basics : LEARN THE ROPES

Today’s Wiki-est, Amazonian Googlies
Across
1. Creator of Dorothy and the Cowardly Lion : BAUM
L. Frank Baum (the “L” is for Lyman) was famous for writing “The Wonderful Wizard of Oz”. Writing early in the 20th century, Baum actually described in his books things that had yet to be invented, like television, laptop computers and wireless telephones.

10. Temptress : VAMP
A “vamp” (short for vampire) is a seductive woman. The term was first used in reference to the sultry performance of actress Theda Bara in the 1915 film “A Fool There Was”. The movie’s title is a quotation from Rudyard Kipling’s 1897 poem “The Vampire”. Bara’s role was positioned as a “vampire”, a woman out to seduce a man, launching the use of “vamp” as an alternative term for a “femme fatale”.

14. Incantation starter : ABRA-
The incantation “abracadabra” has a long history. It was used as far back as the 2nd century AD in Ancient Rome when the word was prescribed by a physician to be worn on an amulet to help his emperor recover from disease. “Abracadabra” is Aramaic, and roughly translates as “I will create as I speak”.

15. Part of a drum set : SNARE
Snare drums are so called because they have a set of wire strands (called snares) stretched across the bottom surface of the drum. When the drum is struck, the snares vibrate against the bottom drumhead producing a unique sound.

16. It has space for one pupil : IRIS
The iris is the colored part of the eye with an aperture in the center that can open or close depending on the level of light hitting the eye.

The pupil of the eye is the “hole” located in the center of the iris through which light enters the retina. The term “pupil” came into English via French from the latin “pupilla”, which is the diminutive form of “pupa” meaning “girl, doll”. The term came about due to the tiny doll-like image that one can see of oneself when looking into the center of another’s eyes.

18. “Good job!” : KUDOS!
Our word “kudos” means acclaim given for an exceptional achievement. “Kudos” is not a plural, despite a common misapprehension. It is a singular noun derived from the Greek “kyddos” meaning “glory, fame”.

23. Writer Rand : AYN
Ayn Rand was the pen name of Russian-American novelist Alisa Rosenbaum. Rand’s two best known works are her novels “The Fountainhead” published in 1943 and “Atlas Shrugged” in 1957. Back in 1951, Rand moved from Los Angeles to New York City. Soon after, she gathered a group of admirers around her with whom she discussed philosophy and shared drafts of her magnum opus, “Atlas Shrugged”. This group called itself “The Collective”, and one of the founding members was none other than future Federal Reserve chairman, Alan Greenspan.

24. English poet Wilfred ___ : OWEN
Wilfred Owen was an English soldier and noted poet, famous for writing realistic poetry about the tragedies of trench warfare during WWI. Owen was killed in action only one week before the war ended, so most of his work was published posthumously.

25. Swimwear material : LYCRA
What we call spandex in the US is known as Lycra in the British Isles. “Spandex” was chosen as the name for the elastic fiber as it is an anagram of “expands”.

A jamboree is a very large gathering of scouts from around the country, and sometimes from around the world. The exact etymology of “jamboree” is much debated, but it is likely to be a term coined by Lord Baden-Powell, the founder of the scouting movement. Baden-Powell lived in Africa for many years and so many think that the term is based on “jambo”, the Swahili word for “hello”.

41. Gas stations on turnpikes, say : OASES
Back in the 15th century a “turnpike” was a defensive barrier across a road. By the 17th century the term was used for a barrier that stopped travellers until a toll was paid. By the 18th century a turnpike (sometimes “pike”) was the name given to a road with a toll.

42. Commercial prefix with -flot : AERO-
Aeroflot is the flag carrier of the Russian Federation. Aeroflot is one of the oldest airlines in the world and started operations as the Russian Society of Voluntary Air Fleet in 1923. Back in the days of the Soviet Union, Aeroflot was also the world’s largest airline, an honor that now goes to Delta Airlines. I flew Aeroflot into Moscow one time. Quite memorable …

48. Hyundai luxury sedan : AZERA
The Hyundai Azera was the name used worldwide for the model known as the Hyundai Grandeur in its homeland of South Korea. The Azera was produced from 1986 to 1992.

53. Not fully open : AJAR
Our word “ajar” is thought to come from Scottish dialect, in which “a char” means “slightly open”.

56. Faux ___ : PAS
The term “faux pas” is French in origin, and translates literally as “false step” (or “false steps”, as the plural has the same spelling in French).

57. Sub … or a literal hint to 20-, 34- and 43-Across : HERO SANDWICH
“Hero” is another name for a submarine sandwich. The hero originated in New York City in the 1800s among Italian immigrants who wanted an Italian sandwich that reminded them of home. The name “hero” was coined in the 1930s, supposedly by a food critic in the “New York Herald Tribune” when he wrote that “one had to be a hero” to finish the gigantic sandwich. Hero is a prevalent term to this day in New York City, reserved for a submarine sandwich with an Italian flavor.

61. Name that completes the old slogan “Dirt can’t hide from Intensified ___” : TIDE
Tide is a laundry detergent that has been made by Procter & Gamble since 1946. Back then, Tide was marketed as “America’s Washday Favorite”.

65. Opera singer Pinza : EZIO
Ezio Pinza was an opera singer from Italy. Pinza performed for many years with the Metropolitan Opera in New York before retiring from the Met in 1948. He then launched a career on Broadway and in Hollywood.

68. ___ Weizman, 1990s Israeli president : EZER
Ezer Weizman was the seventh President of Israel. Earlier in his career, Weizman was a combat pilot in the UK’s Royal Air Force and later rose to Commander of the Israeli Air Force. He also served as Israel’s Minister of Defense before becoming President.

4. Fashion designer Jacobs : MARC
Marc Jacobs is an American fashion designer from New York City with his own line of clothing. He is also the creative director for the French design house, Louis Vuitton.

7. Dangerous gas : RADON
Radon is a radioactive gas, a byproduct produced when uranium decays naturally in the earth. Radon gas can collect and accumulate in buildings and rooms that are particularly well insulated with very little air exchange. The danger is very real, as radon is listed as the second most frequent cause of lung cancer after cigarette smoke.

8. Inspiration for a troubadour : EROS
Eros, the Greek god of love, was also known as Amor.

9. He played Ricky to Lucille’s Lucy : DESI
Desi Arnaz was famous for his turbulent marriage to Lucille Ball. Arnaz was a native of Cuba, and was from a privileged family. His father was Mayor of Santiago and served in the Cuban House of Representatives. However, the family had to flee to Miami after the 1933 revolt led by Batista.

10. Joe Pesci title role : VINNY
“My Cousin Vinny” is a really fun film from 1992 starring Joe Pesci and Marisa Tomei. In 2008, the American Bar Association rated “My Cousin Vinny” as the #3 Greatest Legal Movie of all time, after “To Kill a Mockingbird” and “12 Angry Man”!

12. Hodgepodge : MIX
“Hochepot” is an Old French word for stew or soup, and this gave rise to an Anglo-French legal term for a collection of property that was gathered prior to being divided up. This became our “hodgepodge” in the early 1400s.

22. Patron saint of Norway : OLAF
Of the many kings of Norway named Olaf/Olav (and there have been five), Olaf II is perhaps the most celebrated as he was canonized and made patron saint of the country. Olaf II was king from 1015 to 1028 and was known as “Olaf the Big” (or Olaf the Fat) during his reign. Today he is more commonly referred to as “Olaf the Holy”. After Olaf died he was given the title of Rex Perpetuus Norvegiae, which is Latin for “Norway’s Eternal King”.

31. ___ Rabbit : BR’ER
Br’er Rabbit and Br’er Fox are characters in the Uncle Remus stories, written by Joel Chandler Harris. The Uncle Remus stories are adaptations of African American folktales that Harris collected across the Southern States. “Br’er” is an abbreviated form of “brother”.

38. Folk singer Joan : BAEZ
Joan Baez is an American folk singer and a prominent activist in the fields of nonviolence, civil rights, human rights and environmental protection. Baez has dated some high-profile figures in her life including Bob Dylan, Steve Jobs (of Apple) and Mickey Hart of the Grateful Dead.

44. Silver of fivethirtyeight.com : NATE
FiveThirtyEight is a website that publishes compiled polling date during election cycles. The site takes its name from from the total number of electors in the US electoral college. FiveThirtyEight has been owned by ESPN since 2013. One has to wonder how that fits with the rest of the ESPN portfolio …

49. More risqué : RACIER
“Risqué” is a French word, the past participle of the verb “to risk”. So in English we use “risqué” to mean “racy”, but in French it means “risky”.

53. Kind of flu or pear : ASIAN
The so called “Asian Flu” was a pandemic that originated in China in 1956, and lasted until 1958. The H2N2 virus, which caused the disease, killed an estimated 2 million people worldwide, including almost 70,000 in the US. Years later, in 1997, the financial crisis that rocked many countries across Asia was given the same name, “Asian Flu”. The crisis started in Thailand when the Thai currency collapsed, and like a virus the panic spread across much of southeast Asia and Japan.

54. Arlo’s partner in the funnies : JANIS
The comic strip “Arlo and Janis” is written by Jimmy Johnson. Introduced in 1985, Arlo and Janis are a baby booming couple with an easy approach to life, and who are very much in love.

61. Upsilon preceder : TAU
Tau is the 19th letter of the Greek alphabet, the letter which gave rise to our Roman “T”. Both the letters tau (T) and chi (X) have long been symbolically associated with the cross.

Upsilon is the Greek letter that gives rise to our English “Y”.

62. Mensans’ prides : IQS
If you ever had to learn Latin, as did I, “mensa” was probably taught to you in Lesson One as it’s the word commonly used as an example of a first declension noun. Mensa means “table”. The Mensa organization for folks with high IQs was set up in Oxford, England back in 1946. To become a member, one is required to have an IQ that is in the top 2% of the population.