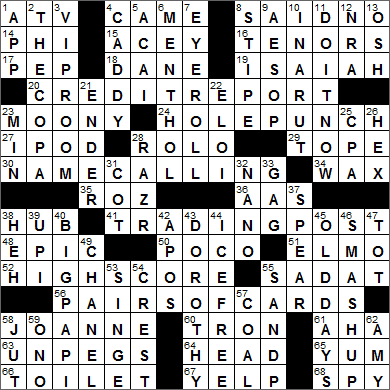 CROSSWORD SETTER: Alex Vratsanos & Sam Ezersky
THEME: Pairs of Cards … each of today’s themed answers comprises two words, each of which is a type of card:

14. Greek letter that’s also an M.L.B. city on scoreboards : PHI
Phi is the 21st letter of the Greek alphabet.

Philadelphia’s baseball team was founded in 1883 as the Quakers, with the name changing to the Philadelphias and Phillies not long into the team’s history. The Phillies have been based in the same city using the same team name longer than any other team in US professional sports.

15. ___-deucey : ACEY
Acey-deucy is a fast-played variant of backgammon. Apparently the game has been a favorite with members of the armed forces since the days of WWI.

18. King Christian or Queen Margrethe : DANE
There have been ten kings of Denmark named Christian. The last was Christian X, who ruled from 1912 to 1947.

Margrethe II has been the Queen of Denmark since 1972. When she was born, the oldest of three girls, it was assumed she would never take up the throne, as Danish law dictated that only makes could be monarch. As women gained more rights in the country, there was a movement to change the constitution, culminating in a referendum in 1953 allowing Magrethe to fulfill her destiny.

19. Book after Song of Solomon : ISAIAH
The Book of Isaiah is part of the Hebrew Bible and the Christian Old Testament. Isaiah is not mentioned in the Qur’an, but many Muslim scholars consider Isaiah a prophet.

27. With 32-Down, Apple release of 2005 : IPOD
(32D. See 27-Across : NANO)
The iPod Nano is the successor to the iPod Mini and was introduced to the market at the end of 2005. There have been seven versions of the Nano to date and the current Nano as well as playing tunes is an FM player, records voice memos, has a pedometer and can connect with external devices (like a heart monitor, maybe) using Bluetooth technology.

28. Hershey’s caramel candy : ROLO
Rolo was a hugely popular chocolate candy in Ireland when I was growing up. Rolo was introduced in the thirties in the UK, and is produced under license in the US by Hershey. I was a little disappointed when I had my first taste of the American version as the center is very hard and chewy. The recipe used on the other side of the Atlantic calls for a soft gooey center.

29. Bend an elbow : TOPE
“To tope” is to drink alcohol excessively and habitually.

35. “Frasier” role : ROZ
Roz Doyle is a character in the wonderful sitcom “Frasier”. Roz is played, very ably, by the actress Peri Gilpin.

50. A little, musically : POCO
“Poco” is an Italian word for “little” and is used in musical notation to mean “to a small degree, a little”.

51. Muppet with his own “World” : ELMO
The last 15 minutes of the children’s show “Sesame Street” was called “Elmo’s World”. “Elmo’s World” was directed towards younger viewers, around 3-years-old.

52. Arcade achievement : HIGH SCORE (“high card” & “scorecard”)
Our word “arcade” comes from the Latin “arcus” meaning “arc”. The first arcades were passages made from a series of arches. This could be an avenue of trees, and eventually any covered avenue. I remember arcades lined with shops and stores when I was growing up on the other side of the Atlantic. Arcades came to be lined with lots of amusements, resulting in amusement arcades and video game arcades.

55. Co-Nobelist with Begin : SADAT
Anwar Sadat was the third President of Egypt right up to the time of his assassination in 1981. Sadat won the Nobel Peace Prize in 1978 along with Israeli Prime Minister Menachem Begin for the role played in crafting the Israel-Egypt Peace Treaty of 1978 at Camp David. It was this agreement that largely led to Sadat’s assassination three years later.

58. The “J” of J. K. Rowling : JOANNE
Joanne Rowling changed her name to J. K. Rowling at the request of her publisher, who believed that young boys might have shied away from reading the first “Harry Potter” book if they believed the story was written by a woman (this was 1997!). “Jo” Rowling chose J for Joanne, and K for Kathleen after her grandmother (Jo had no middle name to use).

60. Suffix with cyclo- : -TRON
A cyclotron accelerates charged particles (ions) using a magnetic field, usually directing the particles round and round a huge underground circular structure.

64. Big part of an Easter Island sculpture : HEAD
The moai are the huge human figures carved out of stone by the native people on Easter Island in the southeastern Pacific Ocean. There are 887 moai in total on the island, the tallest of which is almost 33 feet tall and weighs 82 tons.

Rapa Nui is the Polynesian name for what we are more likely to call Easter Island. The European name was coined by the Dutch explorer Jacob Roggeveen, who came across the island on Easter Sunday in the year 1722. Easter Island is inhabited, and is a location that is remarkably distant from neighboring civilization. The nearest inhabited island is Pitcairn Island, almost 1300 miles away.

66. Kind of bowl : TOILET
Sir John Harington was an author and a member of the court of Queen Elizabeth I of England. However, Harington is perhaps best remembered as the inventor of the flush toilet. Our slang term “john” meaning “toilet”, is thought to be a reference to John Harington.

67. Website with a “Write a Review” button : YELP
yelp.com is a website that provides a local business directory and reviews of services. The site is sort of like Yellow Pages on steroids, and the term “yelp” is derived from “yel-low p-ages”. I have a young neighbor here who used to work for yelp …

Down
2. Hangout in a Barry Manilow hit : THE COPA
The Copacabana of song is the Copacabana nightclub in New York City (which is also the subject of the Frank Sinatra song “Meet Me at the Copa”). The Copa opened in 1940 and is still going today although it is struggling. The club had to move due to impending construction and is now “sharing” a location with the Columbus 72 nightclub.

4. Luxury car, informally : CADDY
The Cadillac Automobile Company was founded in 1902, as an independent company. The company was named for the French explorer Antoine Laumet de la Mothe, sieur de Cadillac. Cadillac founded the city of Detroit in 1701. The company was taken over by GM in 1909, and over the next thirty years GM did a great job establishing Cadillac as the luxury car one just had to own.

5. Antioxidant-rich berry : ACAI
Açaí is a palm tree native to Central and South America. The fruit has become very popular in recent years and its juice is a very fashionable addition to juice mixes and smoothies.

8. Michael of R.E.M. : STIPE
Michael Stipe was the lead vocalist for the band R.E.M. that was active from 1980 through 2011. Stipe is also active in the film industry. He served as an executive producer on the films “Being John Malkovich” and “Man on the Moon”.

9. “Sour grapes” storyteller : AESOP
Our expression “sour grapes” is an allusion to one of Aesop’s fables, the story of “The Fox and the Grapes”. In the fable, a squirrel could climb up to grapes high in a tree that a fox was unsuccessful in getting to. On seeing this the fox said, “It’s okay, the grapes were sour anyway”.

13. Kyrgyzstan city : OSH
Osh is the second largest city in the former Soviet Republic of Kyrgyzstan (after the capital Bishkek). Osh was a center of silk production and lies along the old Silk Road, the trade route that traversed Asia.

22. H. G. Wells race : ELOI
In the 1895 novel by H. G. Wells called “The Time Machine”, there are two races that the hero encounter in his travels into the future. The Eloi are the “beautiful people” who live on the planet’s surface. The Morlocks are a race of cannibals living underground who use the Eloi as food.

23. Deg. division : MIN
Latitude and longitude are measured in degrees, minutes and seconds.

25. One who reasons by deduction, for short? : CPA
Certified public accountant (CPA)

26. Put a whammy on : HEX
“Hexen” is a German word meaning “to practice witchcraft”. The use of the word “hex” in English started with the Pennsylvania Dutch in the early 1800s.

“Whammy” is a slang term for a hex, a supernatural spell.

28. Motorola phone brand : RAZR
The Droid Razr is a smartphone made by Motorola that was launched in 2011. The Droid Razr is one in a series of Razr phones that Motorola first introduced back in 2003. The Razr name was chosen in part because of the phone’s relatively thin form factor.

39. Wire service inits. : UPI
Founded in 1958, United Press International (UPI) was one of the biggest news agencies in the world, sending out news by wire to the major newspapers. UPI ran into trouble with the change in media formats at the end of the twentieth century and lost many of its clients as the afternoon newspapers shut down due to the advent of television news. UPI, which once employed thousands, still exists today but with just a handful of employees.

40. Baseball’s David Ortiz, to fans : BIG PAPI
The Dominican American baseball player David Ortiz has the nickname “Big Papi”. After each home run that Ortiz scores, he looks upwards and points to the sky, a tribute to his mother who died in a car crash in 2002 when she was only 46 years old.

43. “Over the Rainbow” singer : DOROTHY
“Over the Rainbow” is a classic song written especially for the 1939 movie “The Wizard of Oz”. It was sung by the young Judy Garland (Dorothy) in the film, and it was to become her signature song. There is an introductory verse that wasn’t used in the movie, and is very rarely heard:

There is also a second chorus that was intended to be in the movie, but it ended up on the cutting room floor:

Someday I’ll wake and rub my eyes
And in that land beyond the skies,
You’ll find me
I’ll be a laughing daffodil
And leave the silly cares that fill
My mind behind me.

49. No. 5 producer : CHANEL
Chanel No. 5 is a perfume that was released by Coco Chanel back in 1921. Chanel had an affinity for the number “5”, and always presented her dress collection on May 5th (the fifth day of the fifth month). When she was presented a selection of experimental scents as potential choices for the first perfume to bear the Chanel name, she chose the sample in the fifth vial. Chanel instructed that the “sample number 5” should keep its name, asserting that it would bring the scent good luck.

55. 500 managers, for short? : S AND P
Standard & Poor’s (S&P) is a financial services company, famous for its stock market indices, especially the S&P 500. The company also publishes credit ratings for sovereign governments, and in 2011 famously lowered the rating of the US federal government from AAA to to AA+.

59. Strawberry Fields benefactor : ONO
“Strawberry Fields” is a memorial in Central Park in New York City. The memorial is a triangular piece of land found directly across from the Dakota Apartments where Lennon lived and was murdered. At the center of the triangle of land is a circular pathway mosaic of stones with the word “Imagine” in the middle. Lennon’s wife, Yoko Ono, contributed over one million dollars to help pay for the memorial’s design and upkeep.

62. TV title judge : AMY
The actress Tyne Daly really came into the public eye playing Detective Lacey in “Cagney and Lacey”. From 1999 to 2005, Daly played the mother of the title character in the TV show “Judging Amy”.