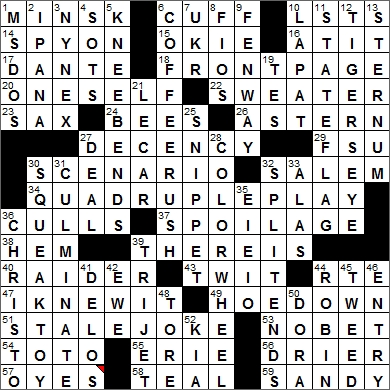 Today’s Wiki-est, Amazonian Googlies
Across
1. 1960-62 home of Lee Harvey Oswald : MINSK
Lee Harvey Oswald was the assassin who killed President John F. Kennedy in Dallas on November 22, 1963. Oswald served with the US Marines from 1956 until 1959. One month after leaving the military, Oswald traveled to the Soviet Union via a circuitous route across the Atlantic and Europe. He entered the Soviet Union on a visa that was only valid for one week, but once in the country he made it clear that he wanted to stay. Oswald settled in Minsk for a few years, working there as a lathe operator and living in government-subsidized housing. In 1961, Oswald married a 19-year-old Russian student and the couple had a baby girl a year later. Oswald grew tired of life in Russia though, so he and his new family moved to the US in 1962, settling in the Dallas area. Oswald’s widow still lives in Texas.

10. Craft for amphibious operations, for short : LSTS
LST stands for Landing Ship, Tank. LSTs were the large vessels used mainly in WWII that had doors at either ends through which tanks and other vehicles could roll off and onto beaches. The design concept persists to this day in the huge fleet of commercial roll-on/roll-off car ferries, all inspired by the LST.

15. Sooner in history? : OKIE
“Okies” was a derogatory term used during the Dust Bowl of the 1930s for farming families who migrated from Oklahoma (hence the name), Arkansas, Kansas and Texas in search of agricultural jobs in California. The road used by many of these migrant families was Route 66, which is also called “Mother Road”.

17. “He listens well who takes notes” writer : DANTE
Dante Alighieri (usually just “Dante”) was an Italian poet of the Middle Ages. Dante’s “Divine Comedy” is widely considered to be the greatest literary work ever written in the Italian language.

22. Signature attire for Archie : SWEATER
Archie Andrews was the main character in a comic book series introduced in 1941 by Archie Comics. Archie was such a successful character that he went on to appear in a radio series, a syndicated comic strip and two television cartoon shows. Famously, Archie got himself in a love triangle with Betty Cooper, the girl next door, and Veronica Lodge, the only child of the richest man in town.

23. Wail producer : SAX
The saxophone was invented by Belgian Adolphe Sax. Sax developed lip cancer at one point in his life, and one has to wonder if his affliction was related to his saxophone playing (I am sure not!). I had the privilege of visiting Sax’s grave in the Cemetery of Montmartre in Paris a few years ago.

29. Sch. with a campus in Panama City : FSU
The main campus of Florida State University (FSU) is located in Tallahassee, the state capital of Florida. The school’s athletic teams are known as the Seminoles (sometimes “the ‘Noles”). The team name was chosen in 1947 by the students in a vote, and alludes to the Seminole people who originally lived in the state. Most of the Seminole now live in Oklahoma, after their forced relocation by the US government in the 1840s.

Early in its life, the town of Harrison in the Florida Panhandle changed its name to Panama City, at the behest of a local real estate developer. The intent was to cash in on the interest there was in the construction of the Panama Canal at that time. One rationale for the name change was that Harrison sat on a straight line drawn on a map between Chicago and the capital of Panama.

32. Infamous trial site : SALEM
Salem is a seaport on the Massachusetts coast. It is noted as the location of the Salem Witch Trials of 1692, an event that the city commemorates during the run-up to Halloween every year in October.

34. Super-rare feat in baseball lore : QUADRUPLE PLAY
Apparently, a quadruple play is possible in baseball. Such a feat would occur if the bases are loaded with no outs. The batter hits a fly ball, and all runners take off. The fly ball is caught (probably unexpectedly), for the first out. The ball is thrown to second base to catch the runner off-base giving the second out. The ball is quickly thrown to first, catching another runner off-base for the third out. The runner who left third has crossed home plate, but doesn’t score as he hasn’t tagged up, so is given the fourth out. This fourth out is allowed, to negate any score. And that, is a quadruple play.

39. 1968 hit by the Dells whose title precedes “the time,” “the place,” “the girl” and “the face” : THERE IS
The Dells were an R&B band that was founded in the early fifties, and was active with several personnel changes until 2009. Their biggest hit by far was “Oh, What a Night”, that almost topped the charts in 1956, and did get to the #1 spot in 1969 when it was re-recorded.

53. What “check” could mean : NO BET
In a card game like poker, a player can say “check” when not raising the pot.

58. Color akin to cyan : TEAL
The beautiful color of teal takes it name from the duck called a “teal”, which has dark greenish-blue (teal) markings on its head and wings.

59. Like the Sahara : SANDY
The name “Sahara” means “greatest desert” in Arabic and it is just that, a great desert covering almost 4 million square miles of Northern Africa. That’s almost the size of the United States.

Down
1. It ran on many clones : MS-DOS
MS-DOS (short for Microsoft Disk Operating System) was the main operating system used by IBM-compatible PCs in the eighties and for much of the nineties.

In the early days of desktop computing, an IBM clone (also a “PC clone”) was a computer built by an IBM competitor that was designed to function just like an IBM, but without using any copyrighted material or trade secrets that were the intellectual property of IBM. Clones were always a competitive issue for IBM, and perhaps were part of the reason that IBM doesn’t make desktop computers today …

2. Close-Up competitor, once : IPANA
Ipana toothpaste was introduced in 1915 and was at the height of its popularity in the forties and fifties. Sales declined in the sixties and the product was withdrawn from the US market in the seventies. Bucky the Beaver was the “spokesman” for Ipana. Bucky the Beaver’s slogan was “Brusha… Brusha… Brusha. Get the New Ipana – it’s dandy for your teeth!”

3. A Verizon forerunner : NYNEX
After the breakup of AT&T in 1984, the former AT&T subsidiaries New York Telephone and New England Telephone got together to form NYNEX, a new company providing telephone service in the northeast of the country. The name NYNEX comes from New York (NY) New England (NE) Exchange (X). NYNEX is no more, as it was swallowed up by Verizon.

4. They often get smashed : SOTS
Our word “sot” comes from the Old English “sott”, meaning “fool”. The word “sot” started to be associated with alcohol and not just foolery in the late 1500s.

7. 2014 revolution site: Abbr. : UKR
Ukraine is a large country in Eastern Europe, a Soviet Socialist Republic (SSR) before the dissolution of the USSR. In English we often call the country “the” Ukraine, but I am told that we should just say “Ukraine”.

8. Verizon service : FIOS
FiOS is a service from Verizon that bundles Internet, telephone and television service. All three services are provided over fiber-optic lines, right to the door.

9. 1912 and 2013 World Series setting : FENWAY
The scoreboard at Boston’s Fenway Park is hand-operated, and was installed in 1934. Back then, the lights used to indicate balls and strikes were considered pretty leading-edge technology.

13. Chest protector : STERNUM
Sternum is the Latin name for the breastbone.

19. Some offensive N.F.L. players, briefly : TES
In American football, a quarterback (QB) might throw to a tight end (TE).

21. Old alternative to a Rabbit : LE CAR
French automaker Renault made the “mini-like” Renault 5 and sold it as the Renault “Le Car” in North America. My Dad had a Renault 5 back in Ireland …

The Volkswagen Rabbit is a small front-wheel drive car that is sold as the Volkswagen Golf outside of North America.

28. Shades are placed around it : COLOR WHEEL
A color wheel is visual device that illustrates the relationship between various colors and hues.

35. Letters associated with animal sounds : E-I-E-I-O
There was an American version of the English children’s song “Old MacDonald Had a Farm” (E-I-E-I-O), that was around in the days of WWI. The first line of the US version goes “Old MacDougal had a farm, in Ohio-i-o”.

36. Big name in environmental art : CHRISTO
Christo Javacheff is a Bulgarian-born artist from France. Along with his wife Jeanne-Claude Denat de Guillebon, Christo created what were termed environmental works of art. Most familiar to me was the complete wrapping of the Reichstag in Berlin. You might also remember a work called “The Gates”, which was made up of over 7,000 gates erected along 23 miles of pathways in New York City’s Central Park. Each of the gates was draped with orange-colored nylon fabric.

41. Center of the Cyclades : DELOS
Delos is a Greek island in the Cyclades archipelago. Delos played an important part in Greek mythology as the birthplace of Apollo and Artemis.

The Cyclades are a group of islands in the Aegean Sea lying southeast of the Greek mainland. There are about 200 islands in the group, almost all of which are the peaks of a submerged mountain range.

42. Pronoun in a rebus puzzle : EWE
A rebus is a puzzle that uses pictures to represent letters and groups of letters. For example, a picture of a “ewe” might represent the letter “U” or the pronoun “you”.

44. Sidekick of 1960s TV : ROBIN
The television show “Batman” aired from 1966-1968. Burt Ward played Robin opposite Adam West’s Batman. Supposedly, Burt Ward was offered the part taken by Dustin Hoffman in “The Graduate”, but Ward couldn’t get out of his contract for the “Batman” television series. Holy xxxx, Batman!

45. Coat material : TWEED
Tweed is a rough woolen fabric very much associated with Scotland in the UK, and County Donegal in Ireland. The cloth was originally called “tweel”, the Scots word for “twill”. Apparently a London merchant misinterpreted some handwriting in the early 1800s and assumed the fabric was called “tweed”, a reference to the Scottish River Tweed, and the name stuck …

52. Soul producer : KIA
The Kia Soul is a compact car produced in South Korea, although it was designed by Kia here in Irvine, California. Yep, the Kia Soul is made in Seoul …