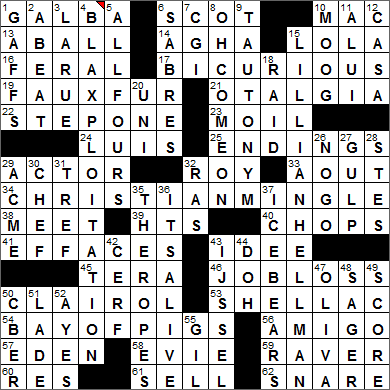 Today’s Wiki-est, Amazonian Googlies
Across
1. Emperor after Nero : GALBA
AD 69 was a year of civil war in ancient Rome. The unrest started with the death of emperor Nero in AD 68, after which followed the brief rule of Galba, of Otho, of Vitellius, and of Vespasian all in the same year. As a result, AD 69 became known as the Year of the Four Emperors.

6. One celebrating the holiday Hogmanay : SCOT
The New Year’s celebration in Scotland is known as Hogmanay, although the term “Hogmanay” applies to New Year’s Eve. Such is the extent of the party for Hogmanay, that New Year’s Day is a public holiday across the country, and so is January 2nd.

10. Nickname for many a 6-Across : MAC
“Mac” is a Gaelic word meaning “son” and “son of”, and is a common prefix in Irish and Scottish names.

13. Step above the rookie leagues, informally : A-BALL
The term “rookie”, used for a raw recruit, first appeared in Rudyard Kipling’s collection of songs and poems called the “Barrack-Room Ballads” originally published in 1892.

14. Ottoman pooh-bah : AGHA
“Aga” (also “agha”) is a title that was used by both civil and military officials in the Ottoman Empire.

17. Willing to experiment, in a way : BI-CURIOUS
Bsexuality is a sexual attraction towards both makes and females. Bi-curiosity is the phenomenon of a heterosexual or homosexual person exhibiting some curiosity about a relationship with someone of the sex that the person does not usually favor.

21. Ear malady : OTALGIA
The medical term for an earache is otalgia, a Greek term deriving from “otos” meaning “ear” and “algos” meaning pain”.

22. Start of an algorithm : STEP ONE
In the world of mathematics and computing, an algorithm is a set of rules or steps used to solve a particular problem.

23. Be in continuous agitation : MOIL
“To moil” is to toil or to slave away. The verb originally applied to laboring in the mire, swamp. The term comes from the Old French “moillier” meaning “to wet”, as in getting wet in the mire.

24. ___ Suárez, player suspended during the 2014 World Cup for biting another player : LUIS
Luis Suárez is soccer player on the Barcelona football team, as well as the Uruguay national team. As well as having a reputation as great soccer striker, Suárez is known for biting at least three of his opponents on the field (believe it or not!).

29. One in a trailer : ACTOR
The term “trailer” came about in the film industry as advertisements for upcoming features were originally shown at the end of a movie being screened. This practise quickly fell out of favor as movie patrons usually left without paying much attention to the trailers. So, the trailers were moved to the beginning of the show, and the term “trailer” persisted.

33. Juillet follower : AOUT
Août is the French for August, and juillet is French for July (note that the name of months aren’t capitalized in French).

34. Forum for seekers of faithful partners? : CHRISTIAN MINGLE
Spark Networks is company that owns several special-interest dating sites online. The most famous is probably ChristianMingle.com, but there is also BlackSingles.com, LDSSingles.com, JDate.com and CatholicMingle.com.

39. Columbia ___ (D.C. neighborhood: Abbr.) : HTS
Columbia Heights is neighborhood in the nation’s capital, aptly named for an area in the District of Columbia.

40. Expertise, informally : CHOPS
We use the word “chops” to mean “expertise” as in the phrases “showing his chops” and “having the chops”, meaning showing his expertise, having the expertise. This usage evolved from the use of the word “chops” for the mouth, jaw or lips, which dates back to the the 1700s. The more contemporary usage dates back to the 1940s when jazz musicians referred to the skill of a player with reference to their use of the lips on an instrument.

41. Wipes out : EFFACES
“To efface” is to erase or obliterate. coming from the MIddle French “effacer” meaning “to wipe out”, or more literally “to remove the face”.

45. Beginning to flop? : TERA-
The prefix tera- signifies a trillion, and comes from the Greek word “teras” meaning “monster”.

50. Natural Instincts maker : CLAIROL
“Does she…or doesn’t she? Only her hairdresser knows for sure” was the catchphrase for Miss Clairol Hair Color Bath. Clairol had been around since 1931 selling hair coloring products to salons, and then hit the big time with the introduction of a one-step hair coloring product for use at home. As famous as the product was the “does she … doesn’t she” advertising campaign. Six years after the launch of the campaign, 70% of women in the US were coloring their hair.

53. Whup but good : SHELLAC
“To shellac” is a slang term meaning “to defeat decisively, to strike severely”.

54. 1961 invasion locale : BAY OF PIGS
The Bay of Pigs is on the southern coast of Cuba. The bay was the site of the abortive military invasion of Cuba in 1961 by a paramilitary group sponsored by the CIA. Cuban forces defending against the attack were personally led by Fidel Castro, and emerged victorious after three days of fighting.

56. One of three in a 1986 comedy : AMIGO
“Three Amigos” is a 1986 comedy film starring Steve Martin, Chevy Chase and Martin Short as three silent movie stars who are mistaken for real western heroes by a Mexican village, a parody on the storylines in “Seven Samurai” and “The Magnificent Seven”.

57. Starting point of a long race? : EDEN
According to the Book of Genesis, Adam and Eve lived in a garden “in” Eden, with Eden being geographically located by reference to four rivers including the Tigris and the Euphrates. Some scholars hypothesize that Eden was located in Mesopotamia, which encompasses much of modern-day Iraq.

58. Singer/songwriter Sands : EVIE
Evie Sands is a singer from Brooklyn, New York. Sands is also a noted songwriter, having penned songs that have been recorded by the likes of Barbra Streisand, Gladys Knight, Karen Carpenter, Linda Ronstadt and Dusty Springfield.

59. One going clubbing, maybe : RAVER
As you might imagine, I’ve never been to a rave, and don’t have one upcoming in my diary. And as raves often start at 2 a.m. then I’m unlikely ever to experience one. A rave is generally an all-night party featuring loud, electronically-synthesized music usually played by a DJ as opposed to a live band.

Down
1. Fishing hooks : GAFFS
A gaff is that dangerous-looking metal hook on the end of a pole that fishermen use to drag large fish into their boats.

3. Lash in old westerns : LARUE
Alfred LaRue was an actor who appeared in a lot of western movies in the forties and fifties. He was very adept with the bullwhip, earning him the nickname “Lash”. Years after his onscreen career ended, LaRue was the guy who trained Harrison Ford how to use a bullwhip for his role in the “Indiana Jones” series of films.

4. Genre of the 1970s movies “Foxy Brown” and “Three the Hard Way” : BLAXPLOITATION
“Blaxploitation” is a subgenre of the “exploitation” class of movies, films that make money by exploiting a genre of subject matter. Such films tend to be labelled “B movies”. “Blaxploitation” films were targeted at urban African American audiences, hence the name. A movie associated with the emergence of blaxploitation is the classic 1971 production “Shaft”.

7. Part of many a sci-fi film : CGI
Computer-generated imagery (CGI)

9. Taxonomic designation like Rattus rattus : TAUTONYM
A “tautonym” is a particular example of a scientific name in which both parts of the name are the same. Examples Bison bison (the American bison, or American buffalo) and Rattus rattus (the black rat).

10. Instrument in “Switched-On Bach” : MOOG
Robert Moog invented the Moog Synthesizer in the sixties, an electronic device that he used to produce music. I used to own a few of his albums, including a Moog version of Mussorgsky’s “Pictures at an Exhibition”. What a great performance that was …

“Switched-On Bach” is a groundbreaking album that consists of several works composed by Johann Sebastian Bach performed on a Moog synthesizer. Despite being a fan of the use of period instruments for the performance of classical works, I thoroughly recommend “Switched-On Bach”.

15. “Toys in the Attic” playwright, 1960 : LILLIAN HELLMAN
Lillian Hellman was a dramatist and screenwriter who was famously blacklisted by the House Committee on Un-American Activities (HUAC) in the late forties and early fifties. Although Hellman was ostensibly married to playwright Arthur Kober, her name was linked romantically with author Dashiell Hammett. Hammett was also blacklisted by HUAC for decades.

20. College abroad : UNI
In Australia (Down Under) and in the British Isles the term “Uni” is routinely used for “university”.

31. Not kosher : TREF
According to Jewish dietary law, “kosher” food is “fit” to eat, and food that is not kosher is called “treif” (or tref).

35. How things work : THE ROPES
“To know the ropes” was originally a seaman’s term, one meaning that a sailor knew how to handle himself when faced with the ropes that controlled the sails and other rigging on a sailing vessel.

42. Vint ___, one of the so-called “fathers of the Internet” : CERF
Although there are a few people who are given the title “father of the Internet”, Vint Cerf is most associated with the title. Also so honoured are engineers Bob Kahn and Donald Davies. Cerf co-designed the architecture of the Internet, as well as the crucial TCP/IP protocols used.

44. “Silly me!” : D’OH!
“The Simpsons” is one of the most successful programs produced by the Fox Broadcasting Company. Homer Simpson’s catchphrase is “D’oh!”, which became such a famous exclamation that it has been included in the Oxford English Dictionary (OED) since 2001. “D’oh!” can be translated as “I should have thought of that!”

50. One navigating breakers? : CBER
A CBer is someone who operates a Citizens’ Band radio. In 1945, the FCC set aside certain radio frequencies for the personal use of citizens. The use of the Citizens’ Band increased throughout the seventies as advances in electronics brought down the size of transceivers and their cost. There aren’t many CB radios sold these days though, as they have largely been replaced by cell phones.

51. Put weight on : LADE
The verb “lade” meaning “to load” comes from an Old English word “hladan”. Lade also used to mean “to draw water” and indeed gave us our word “ladle”. So “lade” and “ladle” are close cousins.

52. Side for passage : AYES
Politicians might vote “aye” to support the passage of bill.