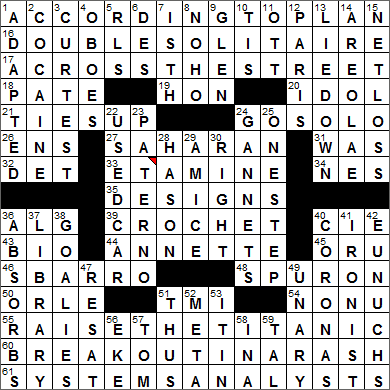 18. Spread out on a table : PATE
Pâté is a rich spreadable paste made up of a mixture of ground meat and fat, to which various vegetables, herbs and spices may be added. The most famous version of the paste is pâté de foie gras, made from the fattened livers of geese (“foie gras” means “fat liver” in French).

27. Dry : SAHARAN
The name “Sahara” means “greatest desert” in Arabic and it is just that, a great desert covering almost 4 million square miles of Northern Africa. That’s almost the size of the United States.

34. Old Tetris runner, briefly : NES
The Nintendo Entertainment System (NES) was sold in North America from 1985 to to 1995. The NES was the biggest selling gaming console of the era.

39. Do some fancywork : CROCHET
Crochet is the process of making a fabric using a hooked needle called a crochet hook. “Crochet” is a French word for “hook”.

44. O’Toole of TV’s “Smallville” : ANNETTE
Annette O’Toole is the actress who plays Clark Kent’s mother on the TV show “Smallville”.

Smallville, Kansas is the town on Earth in which Superman grew up (as Clark Kent). One of Clark’s best friends in Smallville, and the romantic interest of his youth, was Lana Lang.

45. The Golden Eagles of the Summit League, in brief : ORU
Oral Roberts University (ORU) is a private school in Tulsa, Oklahoma. ORU was founded relatively recently, in 1963 by the late televangelist Oral Roberts. The campus includes a Prayer Tower at its center, a spectacular glass and steel structure designed by architect Frank Wallace. The tower includes an observation deck, and is a popular tourist attraction. The school’s sports teams are known as the Oral Roberts Golden Eagles.

50. Heraldic border : ORLE
In heraldry, an orle is a decorative band that lies close to the edge of the front-surface of a shield. With such a design, the orle necessarily takes on the shape of the shield.

51. Response to an overly personal comment : TMI
Too Much Information (TMI)

54. Lower-class, to Brits : NON-U
“Non-U” is a term used in the UK that originated in the fifties, referring to those who are “not upper class”. i.e. middle class. In effect, “the U” are the “upper” class, and “the non-U” are the middle class.

Down
2. Ingredient in a Brompton cocktail : COCAINE
A Brompton cocktail is a mixture of morphine and cocaine that was given orally to terminally ill patients to relieve pain. The elixir takes its name from the Royal Brompton Hospital in London, where it was created in the twenties for patients suffering with tuberculosis.

4. Woods in a pit : OBOES
The oboe is perhaps my favorite of the reed instruments. The name “oboe” comes from the French “hautbois” which means “high wood”. When you hear an orchestra tuning before a performance you’ll note (pun intended!) that the oboe starts off the process by playing an “A”. The rest of the musicians in turn tune to that oboe’s “A”.

5. Creator of Jim Hawkins and Ben Gunn, briefly : RLS
In Robert Louis Stevenson’s “Treasure Island”, Ben Gunn is a character who had been marooned on the island by his shipmates. Gunn had lived there alone for three long years when Jim Hawkins comes across him. Author R. F. Delderfield wrote a “prequel” to “Treasure Island” called “The Adventures of Ben Gunn” telling the story of Gunn, a parson’s son who became a pirate.

7. Neck: Abbr. : ISTH
The word “isthmus” (plural “isthmi”) comes the Greek word for “neck”. An isthmus is a narrow strip of land that usually connects two large land masses. The most notable examples of the formation are the Isthmus of Corinth in the Greek peninsula, and the Isthmus of Panama, connecting North and South America.

8. Big Apple neighborhood : NOHO
NoHo is short for North of Houston (street), and is the equivalent area to SoHo, South of Houston, both in New York City.

22. Any Olds, now : USED CAR
Oldsmobile was an automobile brand founded by Ransom E. Olds (REO) in 1897. The brand was finally phased out by General Motors in 2004.

23. Winningest coach in college football history : PATERNO
Joe Paternowas coach for the Penn State Nittany Lionsfrom 1966 to 2011. He was removed from his post as a result of a child sex abuse scandal involving Paterno’s former defensive coordinator. Although Paterno reported the abuse to his superiors, it was deemed that he concealed facts relating to the abuse of young boys. Suffering from lung cancer, Paterno died just two months after he was fired.

24. Plunge-diving seabirds : GANNETS
Gannets are seabirds that dive from a height into the water at speed, pursuing fish underwater.

29. Garment worn partly under an alb : AMICE
The amice is sometimes worn around the shoulders under an alb, by Roman Catholic priests.

37. Where many spines are visible : LIBRARY
In the US, the convention is to write the title on the spine of a book from top-to-bottom. In most of Europe, the convention is to write the title from bottom-to-top. We have a lot of books in the “library” in our house from both sides of the Atlantic, and so there is much moving of the head from left to right as we glance along our bookshelves.

40. Heavenly rings : CORONAS
The external part of the sun is made up of ionized material at a very high temperature and a very low density. This external aura is known as the solar corona, with “corona” being Latin for “crown”. The corona is best observed during a solar eclipse, when the bright light from the sun’s main body is blocked by the moon.

41. One who’s full of surprises? : IRONIST
An “ironist” is someone who uses irony.

42. Ineffectual sorts : EUNUCHS
The word “eunuch” comes from the Greek words “eune” meaning “bed” and “ekhein” meaning “to keep”, so literally a eunuch is a bed-keeper. Indeed, in many early cultures a eunuch was a slave, castrated at an early age to render him “safe”, who was then given lowly domestic tasks such as making the master’s bed, bathing him etc. We use the term today to describe an ineffective man.

52. Like the “Scream” horror films : META
In recent decades the prefix “meta-” has started to be used as a standalone adjective. In this sense “meta” means “self-referential”, describing something that refers to itself. For example, “This sentence starts with the word ‘this’ and ends with the word ‘this’” might be called a meta sentence. A movie that is about the making of a movie could also be described as meta. For example, “The Blair Witch Project” might be described as meta, which is a movie about some young people making a scary movie about the Blair Witch.

56. Stretch (out) : EKE
To “eke out” means to “make something go further or last longer”. For example, you could eke out your income by cutting back on expenses.

57. Waits on a CD : TOM
Tom Waits is a singer-songwriter from Pomona, California. Waits is noted for his growling, rasping voice.

59. Chess champion of the early 1960s : TAL
Mikhail Tal was truly a chess legend. Tal holds the record for the longest unbeaten streak in competition chess. And the second longest winning streak, well, that was by Tal as well.