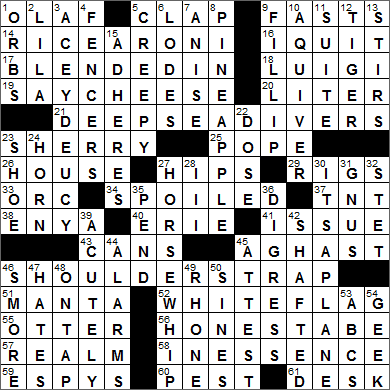 Today’s Wiki-est, Amazonian Googlies
Across
1. Snowman in 2013’s “Frozen” : OLAF
“Frozen” is a 2013 animated feature from Walt Disney Studios that is based on the Hans Christian Andersen fairy tale “The Snow Queen”.

5. Flamenco sound : CLAP
Flamenco is a style of Spanish music and dance. The origin of the word “flamenco” isn’t clearly understood, but the explanation that seems most credible to me is that it comes from Flanders in Northern Europe. Given that “flamenco” is the Spanish word for “Flemish” and Flanders is home to the Flemish people it makes perfect sense, doesn’t it?

9. Observes the Muslim day of Ashura : FASTS
The Day of Ashura in the Islamic calendar is the tenth day of Muharram, which is the first month of the year. “Ashura” translates as “tenth”.

14. Product whose jingle was based on the 1923 hit “Barney Google” : RICE-A-RONI
Rice-a-Roni was introduced in 1958 by the Golden Grain Macaroni Company of San Francisco. The company was run by an Italian immigrant and his four sons. The wife of one of the sons served a pilaf dish at a family diner that was a big hit, so her brother-in-law created a commercial version by blending dry chicken soup mix with rice and macaroni. Sounds like “a San Francisco treat” to me …

“Barney Google (with the Goo-Goo-Googly Eyes)” is a 1923 hit novelty song that was inspired by the comic strip “Barney Google and Snuffy Smith” created by Billy DeBeck.

18. Green-hatted Nintendo character : LUIGI
Mario Bros. started out as an arcade game back in 1983, developed by Nintendo. The more famous of the two brothers, Mario, had already appeared in an earlier arcade game “Donkey Kong”. Mario was given a brother called Luigi, and the pair have been around ever since. In the game, Mario and Luigi are Italian American plumbers from New York City.

19. Words before taking a shot? : SAY CHEESE
Photographers often instruct us to say “cheese”, to elicit a smile-like expression. Even Japanese photographers use the word “cheese” for the same effect. Bulgarians use the word “zele” meaning “cabbage”. The Chinese say “eggplant”, the Danish “orange”, the Iranians “apple” and the most Latin Americans say “whiskey”.

23. Wine of the palomino grape : SHERRY
Sherry is a fortified wine made using grapes from around the town of Jerez de la Frontera (formerly “Xerez” or “Xeres”) in the autonomous community of Andalusia in Spain. The word “sherry” is an anglicized form of the name “Jerez”.

The Palomino grape is grown mainly in Spain and South Africa. The Palomino Fino sub-variety is the principal grape used in the production of sherry.

25. Vicar of Christ, more familiarly : POPE
The Pope is the Bishop of Rome and the leader of the Roman Catholic Church. The term “pope” comes from the Latin “papa”, and ultimately from the Greek “pappas”, with both terms being a child’s word for “father”.

37. N.B.A. on ___ (sports staple since 1989) : TNT
TNT stands for Turner Network Television. The TNT cable channel made a big splash in the eighties when it started to broadcast old MGM movies that had been “colorized”, not something that was a big hit with the public. In recent years, the TNT programming lineup is touted with the tagline “We Know Drama”, and includes shows like “Judging Amy”, “ER” and “Cold Case”.

38. Performer of the 2001 Oscar-nominated song “May It Be” : ENYA
Enya’s real name is Eithne Ní Bhraonáin, which can translate from Irish into Enya Brennan. Her Donegal family (in the northwest of Ireland) formed a band called Clannad, which included Enya. In 1980 Enya launched her very successful solo career. She sure does turn up a lot in crosswords!

“May It Be” is a song written by Irish musician Enya for the 2001 movie “The Lord of the Rings, the Fellowship of the Ring”.

41. Time unit : ISSUE
“Time” magazine has a readership of about 25 million, making it the largest circulation weekly news magazine in the world.

51. Flat fish : MANTA
The manta ray is the biggest species of ray, with the largest one recorded at over 25 feet across and weighing 5,100 pounds.

55. Pod : whale :: raft : ___ : OTTER
The fur of the sea otter is exceptionally thick. It is in fact the densest fur in the whole animal kingdom.

56. Moniker for #16 : HONEST ABE
Abraham Lincoln was the sixteenth President of the US. There are several stories told about how he earned the nickname “Honest Abe”. One story dates back to early in his career as a lawyer. Lincoln accidentally overcharged a client and then walked miles in order to right the wrong as soon as possible.

59. Awards ceremony since 1993 : ESPYS
The ESPY Awards are a creation of the ESPN sports television network. One difference with similarly named awards in the entertainment industry is that ESPY winners are chosen solely based on viewer votes.

Down
1. Orrery components : ORBS
An orrery is an ingenious mechanical device that shows the relative motion and relative positions of the planets in our solar system. The first “modern” orrery was produced in 1704 and was presented to the Irish peer known as the Earl of Orrery, from whence the name “orrery” comes.

2. Diane Sawyer’s actual first name : LILA
From 2009 until 2014, Diane Sawyer was the anchor of the news program “ABC World News”. Sawyer started her career in the Nixon White House where she was hired by the Press Secretary at the time, Ron Ziegler. She worked with Nixon to help him write his memoirs after he left office and helped prepare the ex-president for his famous series of television interviews with David Frost in 1977. Sawyer is married to Mike Nichols, the noted film director.

3. Backgammon variant in which rolling a 1-2 is beneficial : ACEY-DEUCY
Acey-deucy is a fast-played variant of backgammon. Apparently the game has been a favorite with members of the armed forces since the days of WWI.

6. Valuable deposits : LODES
A lode is a metal ore deposit that’s found between two layers of rock or in a fissure. The “mother lode” is the principal deposit in a mine, usually of gold or silver. “Mother lode” is probably a translation of “veta madre”, an expression used in mining in Mexico.

7. Ingredient in five-spice powder : ANISE
Five-spice powder is a mixture of five spices that is used in some Asian and Arabic cuisines. The five ingredients can vary, but a common formulation is:

9. Nice extra : FILLIP
A “fillip” used to be something trivial, of little importance. We mainly use the term today for something that encourages or stimulates.

23. Clodhopper, e.g. : SHOE
Our term “clodhopper” is used to describe a clumsy and coarse person. Back in the 1600s, a clodhopper was someone who worked on plowed land. Clodhoppers are also strong, heavy shoes.

28. First Super Bowl to be called “Super Bowl” : III
Super Bowl I was played in January 1967 between the Green Bay Packers and the Kansas City Chiefs. The Packers emerged victorious in a game with a score of 35-10. That game was officially known as the AFL-NFL Championship Game, as the name “Super Bowl” wasn’t applied until two seasons later. That “first” Super Bowl is now known as Super Bowl III and was played between the New York Jets and the Baltimore Colts. The Jets came out on top.

In the world of DC Comics, Metropolis is a city-state in America that is inspired by real-life New York City. Metropolis is home to Superman. The fictional city is nicknamed “the Big Apricot”.

31. South African game : GNUS
A gnu is also known as a wildebeest, and is an antelope native to Africa. “Wildebeest” is actually the Dutch word for “wild beast”.

32. Proofer’s direction : STET
“Stet” is a Latin word meaning “let it stand”. In editorial work, the typesetter is instructed to disregard any change previously marked by writing the word “stet” and then underscoring that change with a line of dots or dashes.

42. Given a raw deal : SHAFTED
“Shafted” isn’t a nice term at all. It means to give someone a raw deal. The term arose in the fifties, playing on the vulgar slang usage of shaft to represent the male organ (a usage that has been around since the early 1700s). The use of the verb “shaft” therefore is a reference to sodomy. We really should stop using the term …

46. Gooey treat : S’MORE
S’mores are treats peculiar to North America, usually eaten around a campfire. A s’more consists of a roasted marshmallow and a layer of chocolate sandwiched between two graham crackers. The earliest written reference to the recipe is in a 1927 publication called “Tramping and Trailing with the Girl Scouts”. Girl Scouts always did corner the market on cookies and the like!

49. “Starry Night Over the ___” (van Gogh painting) : RHONE
“Starry Night Over the Rhone” is one of Vincent Van Gogh’s series of paintings he created depicting scenes at night in the South of France. The painting is actually a view from the quay on the east side of the Rhone river as it flows through the city of Arles.

54. Sideshow oddity : GEEK
The original “geek” was a sideshow performer, perhaps at a circus. We use the term today for someone regarded as foolish or clumsy, but also for someone who is technically driven and expert, but socially inept.