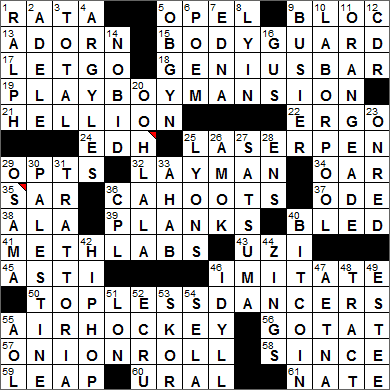 5. Automaker that originally sold sewing machines : OPEL
Adam Opel founded his company in 1863, first making sewing machines in a cowshed. Commercial success brought new premises and a new product line in 1886, namely penny-farthing bicycles. Adam Opel died in 1895, leaving his two sons with a company that made more penny-farthings and sewing machines than any other company in the world. In 1899 the two sons partnered with a locksmith and started to make cars, but not very successfully. Two years later, the locksmith was dropped in favor of a licensing arrangement with a French car company. By 1914, Opel was the largest manufacturer of automobiles in Germany. My Dad had an Opel in the seventies, a station wagon (we’d say “estate car” in Ireland) called an Opel Kadett.

19. Bunny habitat : PLAYBOY MANSION
The Playboy Mansion is Hugh Hefner’s home, although much of the building and grounds are also used for corporate events. The mansion was built in 1927 for Arthur Letts, Jr., the son of Arthur Letts who founded the Broadway chain of department stores. Playboy bought the property in 1971 for just over a million dollars, and it’s now worth about 50 times that amount.

21. Holy terror : HELLION
A “hellion” is a mischievous and wild person. “Hellion” is a North American term, probably derived for the word that we use for the same thing on the other side of the Atlantic, which is “hallion”.

22. It leads to a logical conclusion : ERGO
“Ergo” is the Latin word for “hence, therefore”.

24. Old English letter : EDH
Eth (also “edh”) is a letter that was used in Old English and several other languages, such as Icelandic and Faroese (native language on the Faroe Islands). Other languages that used eth replaced it with the letter D over time.

34. Blade in a lock : OAR
Oarlocks are swivelling braces on the sides of a rowing boat that hold the oars as the boat is being propelled. Back in Ireland, we call them “rowlocks” (pronounced “rollox”). I love the word “rowlocks” …

41. Workplaces where speed is the first order of business? : METH LABS
“Meth” is a street name used for the drug methamphetamine, also called “crank” and “crystal meth”.

“Speed” is a slang name for some stimulant drugs, especially amphetamine or methamphetamine.

43. Spray source : UZI
The first Uzi submachine gun was designed in the late 1940s by Major Uziel “Uzi” Gal of the Israel Defense Forces, who gave his name to the gun.

45. Bubbly source : ASTI
Asti is in the Piedmont region of northwest Italy. The region is perhaps most famous for its Asti Spumante sparkling white wine.

60. Risk territory west of Siberia : URAL
Risk is a fabulous board game, first sold in France in 1957. Risk was invented by a very successful French director of short films called Albert Lamorisse. Lamorisse called his new game “La Conquête du Monde”, which translates into English as “The Conquest of the World”. A game of Risk is a must during the holidays in our house …

61. “Big ___” (comic strip) : NATE
“Big Nate” is a comic stirp that was launched in 1991, written and illustrated by Lincoln Peirce. The hero of the strip is a rebellious sixth-grader named Nate Wright.

2. Singer of the 2012 Bond film theme : ADELE
Adele is the stage name of English singer Adele Adkins. Adele’s debut album is “19”, named after the age she was during the album’s production. Her second album was even more successful than the first. Called “21”, the second album was released three years after the first, when Adele was three years older. Adele describes her musical style as “heartbroken soul”. Not too long ago, Adele wrote and performed the theme song for the latest James Bond film, “Skyfall”.

7. Buchanan of mystery : EDNA
Edna Buchanan is an author mainly of crime mystery novels. Buchanan also worked as a crime journalist for “The Miami Herald”.

8. “___ Eyes” (1975 #2 hit) : LYIN’
The Eagles song “Lyin’ Eyes” was recorded in 1975. Written by band members Don Henley and Glenn Frey, the lyrics were inspired by a meeting between a man and a woman the composers witnessed in Dan Tana’s Bar & Restaurant in Los Angeles. Henley and Frey imagined a scenario of secret love, and “Lyin’ Eyes” was born.

14. Like some shady contracts, from an auditor’s standpoint : NO-BID
A “no-bid contract” is also known as a “sole source contract”. Such contracts are often awarded when there is only one contractor who is deemed able to provide the services required. No-bid contracts can lead to suspicion that a contract is awarded inappropriately, and not competitively. No-bid contracts that made the news in recent years are those awarded by the US government to Halliburton and Blackwater for security services related to the Iraq War.

16. Grissom aboard Apollo 1 : GUS
Gus Grissom was the second American to fly in space, and the first astronaut at NASA to make two space flights. Sadly, Grissom was one of the three astronauts who died in a terrible launch pad fire in 1967.

23. How some legal rights are made : ON RED
If you’re sitting behind a car that doesn’t make a right on red, it may just be a rental car driven by someone from Europe. Speaking as someone who learned to drive over there, I must admit I held up a few people at red lights when I first visited this country. That’s because in Europe we aren’t allowed to make any move past a red light, unless there is an accompanying green arrow. So, if you’re driving overseas, take care …

25. Where Interpol is headquartered : LYONS
The city of Lyon in France, is also known as “Lyons” in English.

The International Criminal Police Organization is better known as Interpol. The group was formed in 1923 to facilitate international police cooperation. Today the police forces of 190 countries around the world are members of Interpol. The first headquarters of Interpol were in Vienna, and were moved to Berlin during WWII by the Nazi regime. After the war the headquarters were moved again, to just outside Paris, and finally to Lyon in 1989.

26. Out of control : AMOK
The phrase “to run amok” (sometimes “to run amuck”) has been around since the 1670s and is derived from the Malay word for “attacking furiously”, “amuk”. The word “amok” was also used as a noun to describe Malay natives who were “frenzied”. Given Malaya’s troubled history, the natives probably had good reason for that frenzy …

27. Citrus fruit from Japan : SATSUMA
The lovely citrus fruit known in the west as a satsuma is so called because it was first imported from the former Japanese province called Satsuma. The fruit is also known as a “Christmas orange” in the UK, as tradition dictates that satsumas are served as a treat around the holidays in Britain.

28. U.S. Navy O-1: Abbr. : ENS
Ensign is (usually) the most junior rank of commissioned officer in the armed forces. The name comes from the tradition that the junior officer would be given the task of carrying the ensign flag.

29. Former cave dweller, informally : OSAMA
The famous cave that almost certainly housed Osama Bin Laden for a while was in Tora Bora in eastern Pakistan. Tora Bora is not far (~ 30 mi) from what used to be an even more famous spot, the Khyber Pass. “Tora Bora” is a Pashto name which translates to “black dust”.

31. Mediterranean bistro : TRATTORIA
A trattoria is an Italian restaurant. In Italian, a “trattore” is the keeper of an eating house.

33. Starbuck’s order giver : AHAB
Captain Ahab is the obsessed and far from friendly captain of the Pequod in Herman Melville’s “Moby Dick”. The role of Captain Ahab was played by Gregory Peck in the 1956 John Huston film adaptation. Patrick Stewart played Ahab in a 1998 miniseries in which Peck made another appearance, as Father Mapple.

The most famous whale-hunting ship in fiction has to be Herman Melville’s Pequod, featured in his novel “Moby Dick”. The young chief mate of the Pequod is named Starbuck. Starbuck’s name was lifted and used by a Seattle-based coffee company.

40. Modern transaction unit : BITCOIN
Bitcoins are digital units of currency that are used on some Internet sites. Bitcoins are the most popular alternative currency used on the Web today. More and more reputable online retailers are accepting bitcoins, including Overstock.com, Expedia, Dell and Microsoft.

46. Tennyson composition : IDYLL
An “idyll” (also “idyl”) is a short poem with a pastoral theme, usually depicting the scene in romantic and idealized terms. The word comes from the Greek “eidyllion”, which literally translates to “little picture” but was a word describing a short, poem with a rustic theme.

“Idylls of the King” is a cycle of twelve poems by Alfred, Lord Tennyson that retells the tale of King Arthur. One of the “idylls” is the story of Geraint and Enid. Tennyson’s Enid gave her name to the city of Enid, Oklahoma.

47. Hartford-based Fortune 100 company : AETNA
When the health care management and insurance company known as Aetna was founded, the name was chosen to evoke images of Mt. Etna, the European volcano.

Hartford is the capital of the state of Connecticut. The city is home to the headquarters of many insurance companies. As such Hartford is nicknamed the “Insurance Capital of the World”.

49. Accented perfume bottle name : ESTEE
Estée Lauder was a very successful businesswoman, with a reputation as a great salesperson. Lauder introduced her own line of fragrances in 1953, a bath oil called “Youth Dew”. “Youth Dew” was marketed as a perfume, but it was added to bathwater. All of a sudden women were pouring whole bottles of Ms. Lauder’s “perfume” into their baths while using only a drop or two of French perfumes behind their ears. That’s quite a difference in sales volume …

51. Former N.B.A. coach Kruger : LON
Lon Kruger is a professional basketball coach from Silver Lake, Kansas, and former player with the Kansas State Wildcats. Kruger spent most of his career coaching college basketball, but did spend three years with the NBA’s Atlanta Hawks.

52. Linen shade : ECRU
The shade called ecru is a grayish, yellowish brown. The word “ecru” comes from French and means “raw, unbleached”. “Ecru” has the same roots as our word “crude”.

53. Candy bar with a crown logo : SKOR
Skor is a candy bar produced by Hershey’s. Skor is sold in Canada as Rutnam.

54. Ward in pictures : SELA
The actress Sela Ward turns up in crosswords a lot. Ward played Teddy Reed in the TV show “Sisters” in the nineties, and was in “Once and Again” from 1999-2002. I don’t know either show, but I do know Ward from the medical drama “House” in which she played the hospital’s lawyer and Greg House’s ex-partner. That was a fun role, I thought. More recently Ward played a lead role on “CSI: NY” and was a very welcome and much-needed addition to the cast …

55. Tech company that was the subject of a 1997 Time cover : AOL
Founded as Quantum Computer Services in 1983, the company changed its name in 1989 to America Online. As America Online went international, the acronym AOL was used in order to shake off the “America-centric” sound to the name. During the heady days of AOL’s success the company could not keep up with the growing number of subscribers, so people trying to connect often encountered busy signals. That’s when users referred to AOL as “Always Off-Line”.