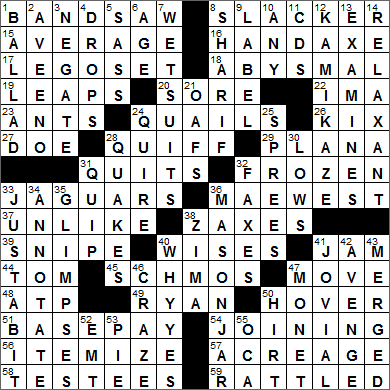 CROSSWORD SETTER: David C. Duncan Dekker
THEME: Three of Everything … today’s grid features at least three occurrences of each letter. We also have some symmetry of sorts with a string of three Qs sitting opposite three Ss, diagonally across the grid close to the center.

Today’s Wiki-est, Amazonian Googlies
Across
17. Makings of a miniature building project : LEGO SET
Lego is manufactured by Lego Group, a privately held company headquartered in Billund, Denmark. The company was founded by a carpenter called Ole Kirk Christiansen in 1934 and the now-famous plastic interlocking blocks were introduced in 1949. The blocks were originally sold under the name “Automatic Binding Bricks” but I think “Lego” is easier to remember! The name “Lego” comes from the Danish term “leg godt” meaning “play well”.

26. Alternative to Corn Pops : KIX
Kix cereal has been around since 1937, would you believe? Kix used to be just puffed grains, processed to give the characteristic shape. Then the decision was made to add sugar to get better penetration into the young kid marketplace. Sad really …

The Kellogg’s cereal known as Corn Pops was introduced in 1951 as Sugar Pops. The “Sugar” name was dropped in the eighties when sugar was labeled as nutritionally “bad”. But, the sugar remained in the cereal …

27. No-name last name : DOE
Although the English court system does not use the term today, John Doe first appeared as the “name of a person unknown” in England in 1659, along with another unknown, Richard Roe. The female equivalent of John Doe is Jane Doe, with the equivalent to Richard Roe being Jane Roe (as in Roe v. Wade, for example).

28. Man’s do with upswept hair in the front : QUIFF
A “quiff” is a lick of hair that’s brought forward over the forehead.

32. Hit 2013 film with a talking snowman : FROZEN
“Frozen” is a 2013 animated feature from Walt Disney Studios that is based on the Hans Christian Andersen fairy tale “The Snow Queen”.

33. South American stalkers : JAGUARS
The jaguar is the third largest feline in the world, after the tiger and the lion. The jaguar resembles a leopard, but is bigger. It is found through much of South and Central America as well as the southern US. The jaguar has a really strong bite, even compared to the bigger cats. It usually kills its prey by biting through the skull.

36. Who said “It’s not the men in your life that counts, it’s the life in your men” : MAE WEST
Comic actress Mae West can be quoted so easily, as she had so many great lines delivered so well. Here are a few:

• When I’m good, I’m very good. When I’m bad, I’m better.
• When choosing between two evils, I always like to try the one I’ve never tried before.
• I’ll try anything once, twice if I like it, three times to make sure.
• Marriage is a great institution, but I’m not ready for an institution yet.
• I used to be Snow White, but I drifted.
• Why don’t you come on up and see me sometime — when I’ve got nothin’ on but the radio.
• It’s better to be looked over than overlooked.
• To err is human, but it feels divine.
• I like my clothes to be tight enough to show I’m a woman, but loose enough to show I’m a lady.
• I never worry about diets. The only carrots that interest me are the number you get in a diamond.
• Is that a gun in your pocket, or are you just happy to see me?

39. Wetlands wader : SNIPE
Snipes are wading birds with very long and thin bills that they use to search for small invertebrates in mud.

In early 1969, the struggling David Bowie recorded a promotional film in an attempt to reach a wider audience. The film called “Love You Till Tuesday” featured seven of Bowie’s songs in what amounted to an extended music video, with one of the tracks being “Space Oddity”. Somebody smart put two and two together later in the year and decided that a fresh version of “Space Oddity” should be released, to coincide with the Apollo moon landings. Sure enough, the BBC snagged the track for their coverage of the landings and gave Bowie huge audiences. And the song still gets an awful lot of air time on the small screen.

45. Ordinary joes : SCHMOS
“Schmo” (also “shmo”) is American slang for a dull or boring person, from the Yiddish word “shmok”.

49. 2012 running mate : RYAN
Paul Ryan was the Republican nominee for Vice President in the 2012 election, on the ticket with Mitt Romney. Off the political stage, Ryan is famous for his fitness regime. He has shared that much of his motivation to work out and to watch his diet is because there is a history of heart attacks at an early age in his family.

58. Proctors’ charges : TESTEES
A “proctor” is a supervisor, especially of an examination in a school, or perhaps of a dormitory. The word “proctor” originated in the late 1500s, a contraction of the word “procurator”, the name given to an official agent of a church.

Down
2. Skin and hair care brand : AVEENO
Aveeno is a manufacturer of skincare and haircare products that was founded in 1945. The name Aveeno comes from the Latin name for the common oat: “Avena sativa”.

11. 9-Down output : CDS
A CD player reads the information on the disc using a laser beam. The beam is produced by what’s called a laser diode, a device similar to a light-emitting diode (LED) except that a laser beam is emitted. That laser beam is usually red in CD and DVD players. Blu-ray players are so called as they use blue lasers.

12. Kind of pilot : KAMIKAZE
The kamikaze attacks by the Japanese Air Force towards the end of WWII resulted in the loss of almost 4,000 Japanese pilots. Almost 20% of the attacks actually hit an Allied ship. The term “kamikaze” translates as “divine wind”, and was originally applied to devastating typhoons that destroyed an invading fleet sent to invade Japan from Mongolia by Kubla Khan.

28. Country rockers? : QUAKES
Those would be earthquakes, rocking a country …

36. Food container with a seal : MASON JAR
Mason jars were invented in 1858 by a tinsmith named John Landis Mason, in Philadelphia.

38. Once-popular alcopop : ZIMA
Zima is a clear alcoholic beverage with about the same strength as beer. Zima is sold in beer bottles but is marketed as “not” a beer. It has a lemon-lime flavor and is referred to as an “alcopop”, a portmanteau word from “alcohol” and “pop”. Zima was made by Coors, but they stopped US production in 2008. However, it is still quite popular in Japan.

40. “Indubitably!” : WHY YES!
Something described as “indubitable” cannot be doubted.

55. Important Peruvian crop : OCA
The plant called an oca is also known as the New Zealand Yam. The tubers of the oca are used as a root vegetable.